The increase in stablecoins has been unprecedented in the past two months. This has led to some theories about what’s behind it.

As you may have noticed, the amount of stablecoins being issued daily is at a remarkable rate. For just Tether (USDT) alone, it has issued some $1B over the last 25 days—that’s around $40M every day in USDT. Other stablecoins, like Binance USD (BUSD), have also upped their issuance.

So, the question many in the cryptocurrency world are asking is: what’s behind the surge? 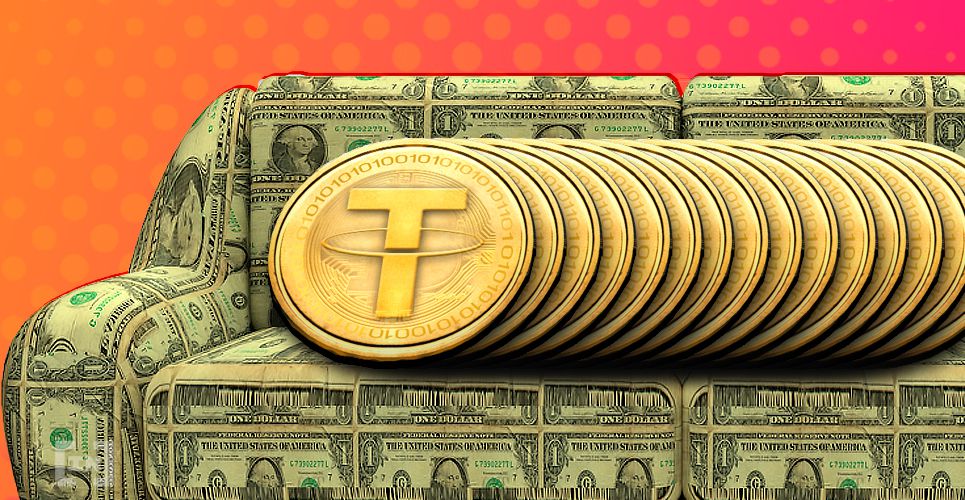 Getting to the Bottom of the Stablecoin Surge

There’s a few things we already know. Firstly, we do know that exchanges are hoarding USDT in record numbers. That number now tops $1.6B and will likely continue to tick upward, but there are still suspicions that exchanges are lending USDT they don’t have.

However, exchanges demanding more USDT are just part of the puzzle, and it’s not enough to explain the surge. According to cryptocurrency commentator Cole Garner, there’s more to the story that we may be missing.

He narrows down three possible reasons for the stablecoin surge. Firstly, it could be caused by the Chinese wealthy bypassing capital controls. You may recall that Bitcoin was trading at a premium in OTC trading in the country earlier this year.

Secondly, institutions could be de-risking for the next leg down for cryptocurrency markets.

Finally, we could see smart money waiting on the sidelines for Bitcoin. As of now, Bitcoin has decoupled from Tether’s new issuance whereas historically it has followed it. 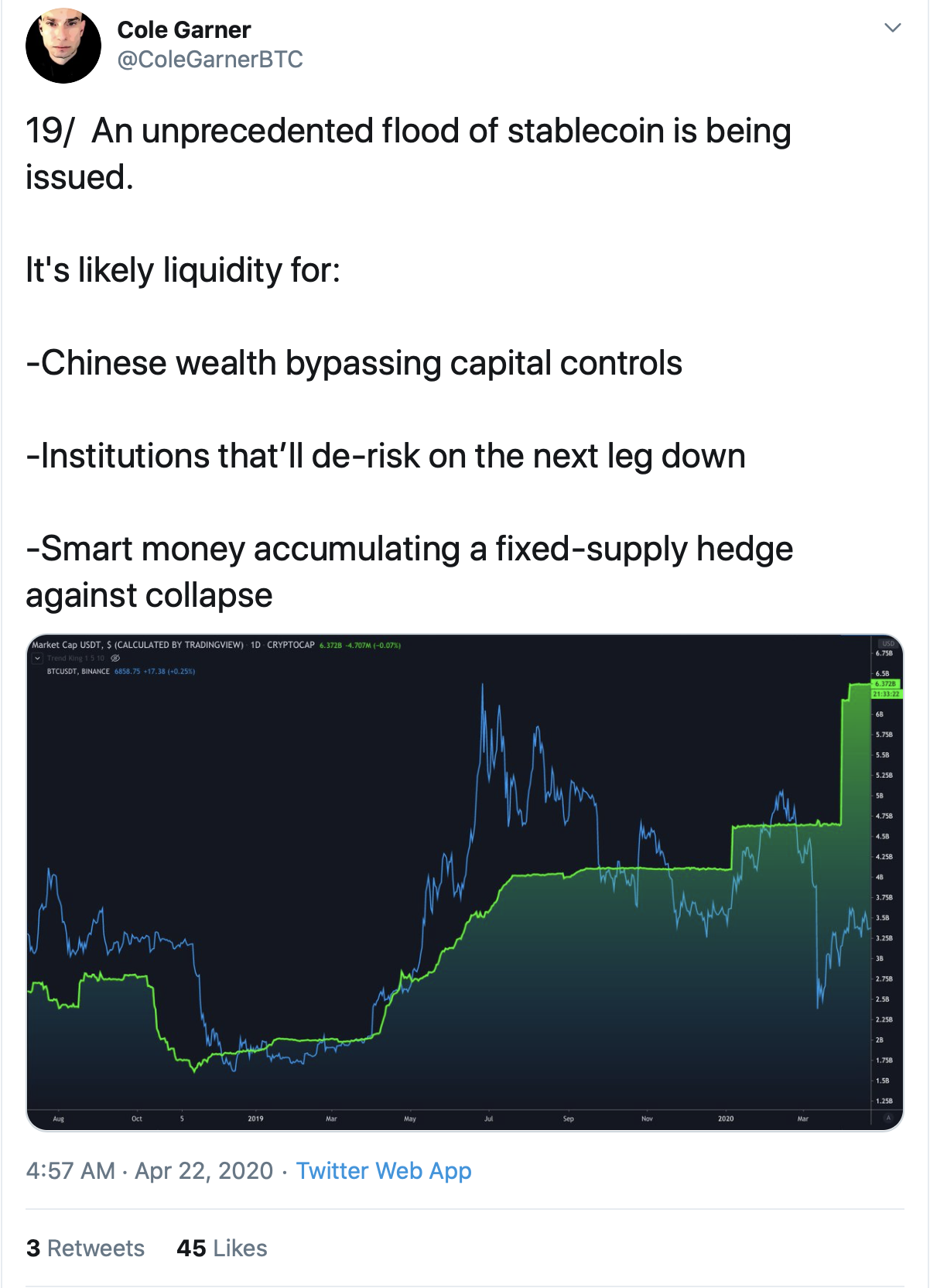 It should also be noted that stablecoins like Tether (USDT) have also been criticized for not being properly audited. So, the growth of stablecoins can alternatively be seen as a last-ditch effort to keep the cryptocurrency market afloat.

One such cynical take comes from Hsaka (@HsakaTrades), who points out that Tether’s money-printing is both unusual and has left other competitors in the dust. 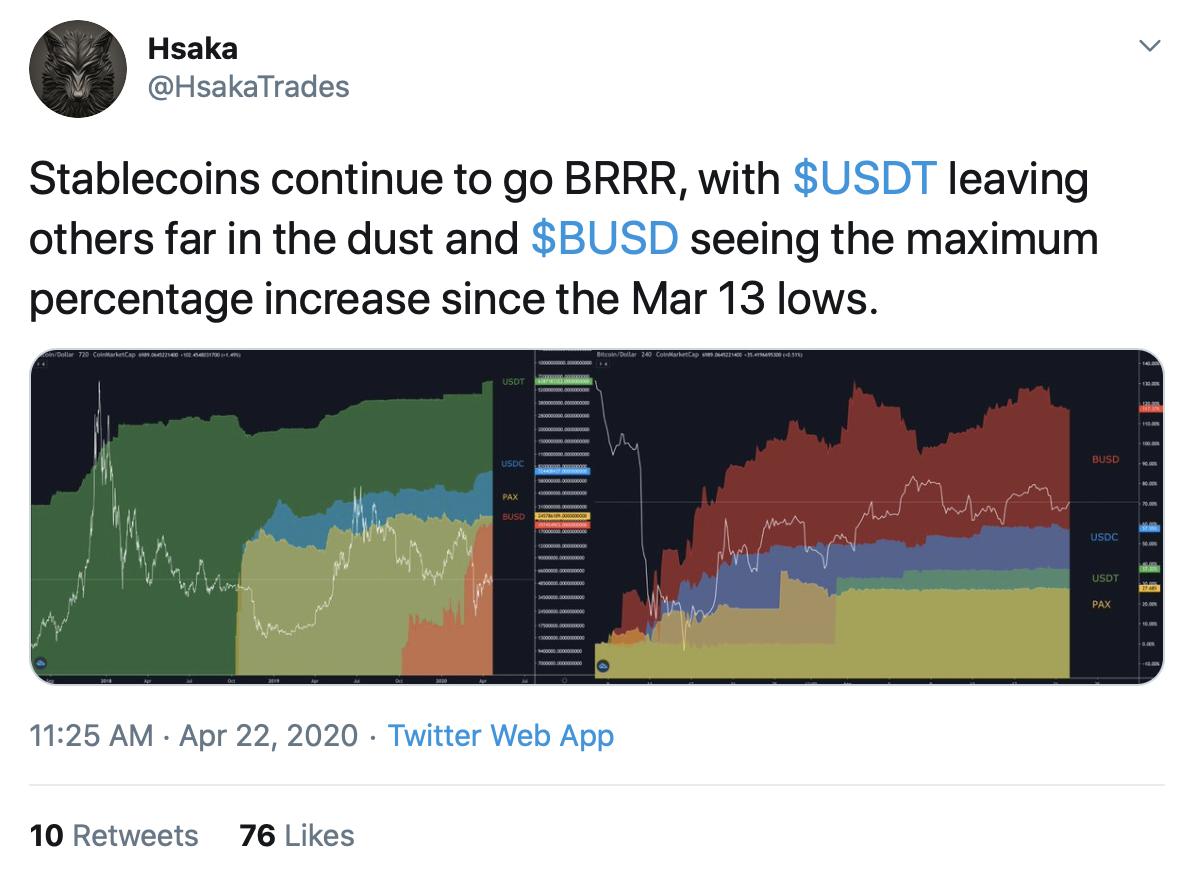 The idea is not that far-fetched, either.

Repeatedly, Tether has been linked to shady operations and only admitted to being part of Bitfinex after it was uncovered in the Paradise Papers. Tether’s co-founder has also outright admitted that it ‘doesn’t matter’ if USDT is backed by actual dollars. Add in New York’s case against Tether, accused of printing USDT to cover up $850M in losses, and you have reasonable grounds for suspicion.

So, are we looking at a situation where traders are on the sidelines and demand for stablecoins is exceptionally high, or is something more nefarious happening behind the scenes? We will surely know in due time.