BUY NOW (BCH) have been locked in neck and neck while gunning to claim the coveted fourth-ranked position near the top of the cryptocurrency market cap ladder. Which one will have the drive to pull away from the pack?

Amid sinking prices in the cryptocurrency market nearing the end of 2018, many projects are skidding to new lows and trying to establish a foothold while praying for a quick reversal.

Three projects, in particular, are competing for the numbers four-through-six positions in terms of total market cap. EOS (EOS), Stellar

Stellar is an open-sourced, blockchain-based database that was developed by the Stellar Development Foundation (SDF). SDF is a nonprofit organization... More Lumens (XLM) and Bitcoin Cash (BCH) are each quite near the $3 billion market cap level and are jockeying for position on the totem pole.

[bctt tweet=”EOS, Stellar and Bitcoin Cash are each quite near the $3 billion market cap level and are jockeying for position on the totem pole.” username=”beincrypto”]

At the time of this writing, the race is too close to call a clear-cut winner — and it is unclear which, if any, will be the first to make a significant push ahead of the rest.

Bitcoin Cash (BCH) has had an especially tough time during the recent downturn and hard fork which took place two weeks ago.

In the crypto world; a ‘fork’ is essentially a change in the protocol of a blockchain. Since cryptocurrencies run on... More, a civil war of sorts has broken out — pitting resources and hashing

Today, the price for one BCH is $177, an all-time low level down from a $3,600 all-time high. It is likely that BCH’s price will continue to be affected by both the price movement of Bitcoin (BTC) and the unfolding hard fork situation.

For now, the price appears to be stuck at the bottom support of a descending parallel channel. In most scenarios, it would be likely to see a bounce off of the support back towards the $250 level, but it is entirely possible that the bear market could drag the price down even more. 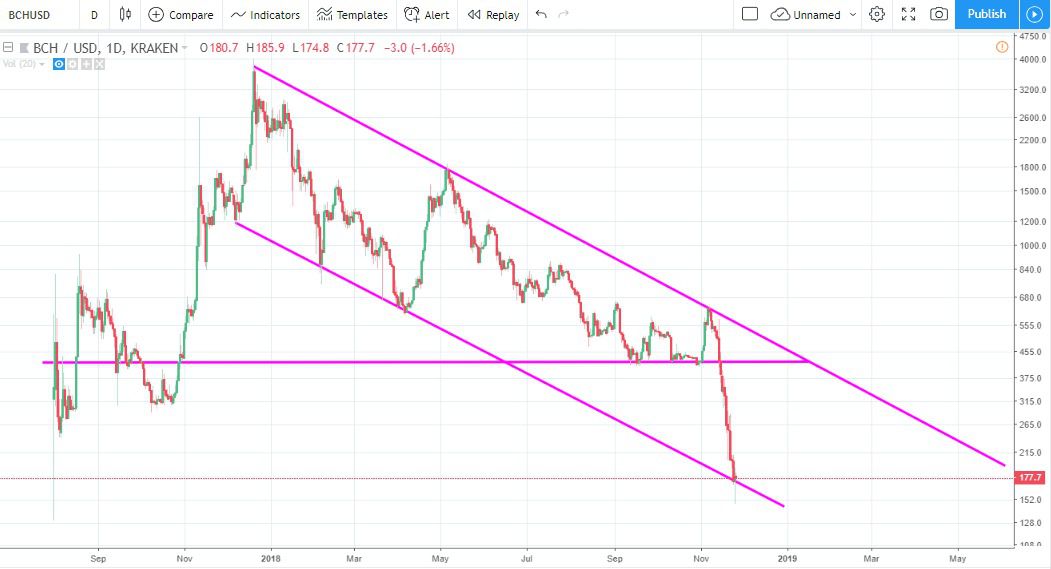 The decentralized application (dApp)-focused blockchain EOS saw a meteoric rise up the ranks at the end of the 2017 bull run, and reached an all-time high of $23 per token in May of this year, leading up to its official mainnet

Blockchain is a digital ledger that’s used for storing data on several servers across the world in a decentralized, trustless... More launch in June.

Just like Bitcoin Cash (BCH), EOS has had its fair share of controversy and criticisms surrounding the centralized nature of its governance model.

Today, the price of a single EOS token is $3.44, down 85 percent from its all-time high. EOS has shown much more resilience in the bear market up compared to Bitcoin Cash (BCH), which lost more than 95 percent since reaching an all-time high.

EOS is sitting in a precarious position below the $4.50 support and has a lot of empty space beneath it. Another significant move down in Bitcoin price could send EOS plummeting to the $1.80 level. 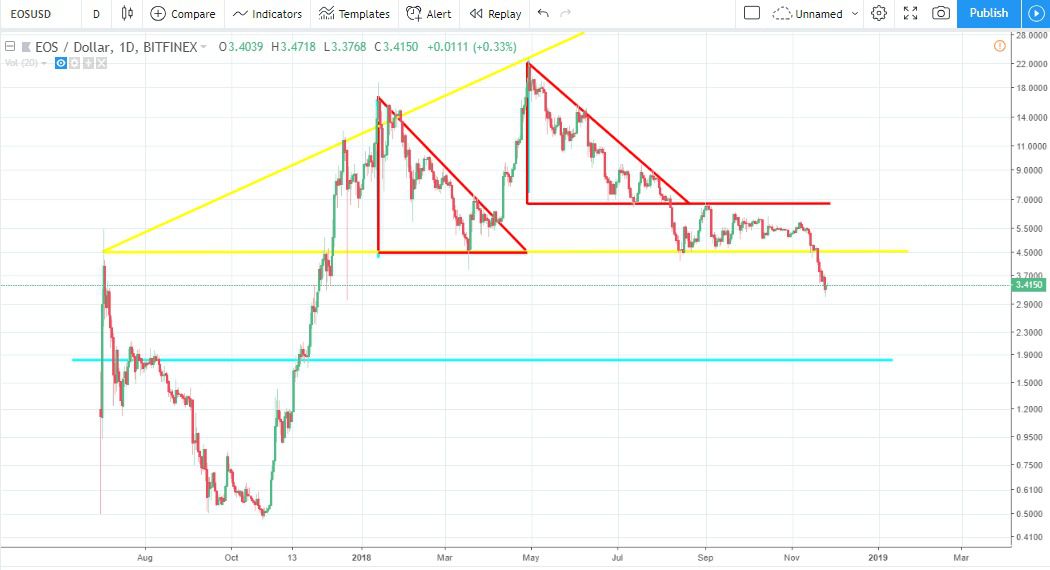 Objectively, Stellar has the best fundamentals out of the trio and could see a significant bounce back in the event of a reversal.

The Stellar team, along with Blockchain digital wallets, recently announced the biggest token airdrop in history, giving away 500,000,000 XLM, worth around $82 million at today’s price of $0.16 per token.

XLM’s price has quite uniformly followed an eleven-month descending triangle pattern with a strong support at the $0.19 level. It was looking like XLM had finally escaped the clutches of the triangle earlier this month when the price reached $0.27 but, instead, turned south — most likely due to selling off from the airdrop

Crypto is a rapidly expanding space and new ways to distribute tokens are continually being developed. Airdrops are used by... More news and the sharp Bitcoin (BTC) decline. 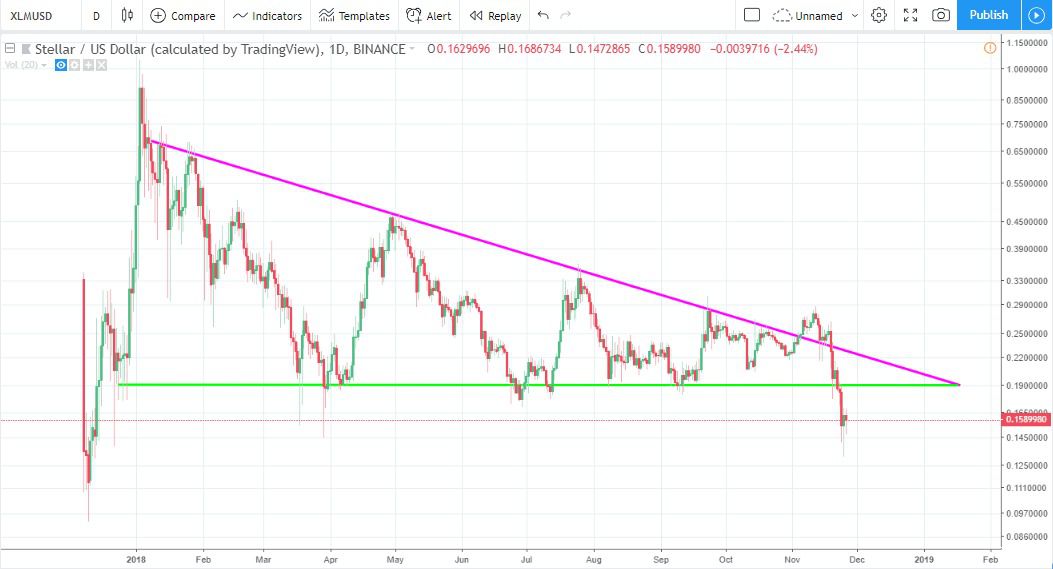 Which blockchain do you think will come out on top between EOS, Stellar and Bitcoin Cash? Do you think any of them will move into the top three in 2019? Let us know your thoughts in the comments below!

Tezos and Cardano Ranked Top of the Class in Technology by Weiss
#Blockchain News 1 month ago
Up Next
Ethereum (ETH) Price Analysis: Back Down To Double-Digits
Ethereum Analysis 1 year ago
Related News

Will EOS Be Successful In Reclaiming Previous Support?