The decentralized finance sector has evolved at lightspeed this year—so much so that it’s been a struggle to keep up. The latest offering is a platform called APY.Finance that aims to automate yield farming while saving on network fees.

As the DeFi token rush continues, new players are entering the scene thick and fast. DeFi tokens have been the best performing digital assets this year, with some of them scoring monumental four-figure percentage gains in 2020.

The latest to join the farming frenzy is a new automated liquidity aggregator called APY.Finance, which is planning an alpha launch and new governance tokens.

According to the announcement, APY.Finance uses its own smart contracts to continuously route crypto collateral to the most-profitable yield farming strategies. At the moment, the platform is still running on a testnet with a demo using Uniswap;

We plan to release an alpha launch at the end of Aug/Sept with liquidity mining rewards and an IDO to follow.

The goal is to democratize yield farming by making it accessible to the average user and not just DeFi experts.

The team has acknowledged a problem in DeFi in that strategies and earning potentials change very quickly. This is only exacerbated as liquidity is added to and removed from various protocols and governance changes evolve.

Users will be able to deposit crypto capital into the protocol in exchange for tokenized liquidity shares called APY Pool Tokens (APT). The tokens represent the total amount of capital held on the platform, operating in a similar manner to Balancer’s Pool Tokens (BPT). 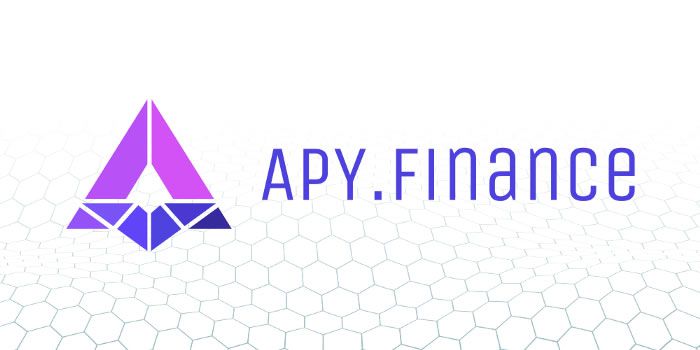 It added that instead of multiple transactions accruing huge gas fees, just one deposit is enough to implement the strategy. The platform will collectively route funds in single transactions as the total value locked grows, saving more on high network fees:

We expect massive gas savings in excess of 99% as the system’s TVL increases. This innovation alone could revolutionize the accessibility of yield farming.

The user interface will provide a summary of APY, smart contract exposure, and possible impermanent loss implications with withdrawals being just a click away.

Under the hood, APY.Finance will spread capital across multiple strategies in order to minimize risk and increase diversification.

It added that the alpha launch will use Compound recursive strategies first. This is the process of lending and borrowing the same asset to farm COMP tokens. As TVL grows there will be an expansion into other protocols including Balancer, Curve, Yearn.Finance, and Synthetix.

In an effort to encourage early adopters, the platform will be allocating a large chunk of its new APY tokens to public rewards and liquidity mining. An Initial Dex Offering has become the standard procedure for DeFi protocols this year and APY.Finance will try to replicate the successes of its predecessors.

As with other platforms, a completely decentralized governance model is also in the pipeline with APY token holders set to be the first to propose and vote on easily verifiable changes to the protocol.

The time frame for the alpha launch and initial COMP farming opportunities have been slated for late-August or September, and BAL farming will be made available once stability has been achieved.

If the successes of other DeFi platform token launches are anything to go by, this will definitely be one to keep an eye on. The sector is in desperate need of simplification and automation if it has any hope of attracting the masses.

The AMM redistributes earnings to liquidity pools, capitalizes on user slippages, and protects traders from front-running attacks, according to the announcement.

The DEX aggregator has grown in popularity as DeFi markets have expanded this year. It claims to achieve the best rates by splitting orders among multiple DEXs in one single transaction.

Current AMMs such as Uniswap work without price oracles and derive rates from liquidity and trades on the platform which can lead to losses if conditions are unfavorable. Curve offers a better pricing structure by tweaking the mathematical formula used to derive rates.

Bancor expanded on this system with its recent v2 upgrade.

1inch has gone even further by enabling liquidity providers to capture profits otherwise captured by arbitrageurs:

The 1inch team was most excited to design an AMM that enables liquidity providers to catch a portion of price slippage profits.

It added that the new Mooniswap AMM is capable of keeping most of the slippage revenue in the pool by maintaining virtual balances for different swap directions. It also claims to be able to generate from 50% to 200% more income for liquidity providers than Uniswap v2.

Centralized crypto exchanges are missing out by not listing DeFi tokens, but Poloniex has been moving with the latest trends and has started accepting BAND deposits and withdrawals:

We’re passionate about continuing our support for DeFi projects and providing our customers with the newest and most innovative assets to trade.

Trading is now open for our new $BAND market 🚀

The Band Protocol has been viewed as a rival for ChainLink in the oracle sphere. Its token has seen explosive growth this year surging by more than 1,300% in the past six weeks or so.

Poloniex stated that it will be listing eight more DeFi tokens over the next week.

DeFi markets have yet again hit a new all-time high in terms of total value locked as the figure reaches $4.73 billion today. The top three protocols in the TVL list; Maker, Compound, and Synthetix, have all increased in collateral by 6-7% over the past 24 hours according to DeFi Pulse.

There has been a spike in wrapped BTC collateral as a record $230 million in tokenized Bitcoin was reached.

The total amount of Bitcoin deposited into DeFi smart contracts has also hit a new high of over 25k BTC as the sector shows no signs of slowing down.