At BeInCrypto, we offer regular price analyses and predictions of the most popular and relevant cryptoassets. In our Mar 20 analysis of Zcash

BUY NOW (ZEC), we predicted that the price would likely fall to the support area outlined below before eventually initiating an upward move. Part of our prediction was validated on Mar 25, when the price reached the support area. However, an upward move has yet to materialize. Our latest analysis was completed on Mar 27 and is presented below along with amended price predictions:

While Bitcoin and Ethereum are the most popular cryptocurrencies, they aren't the privacy coins some think they are. In fact,... More? 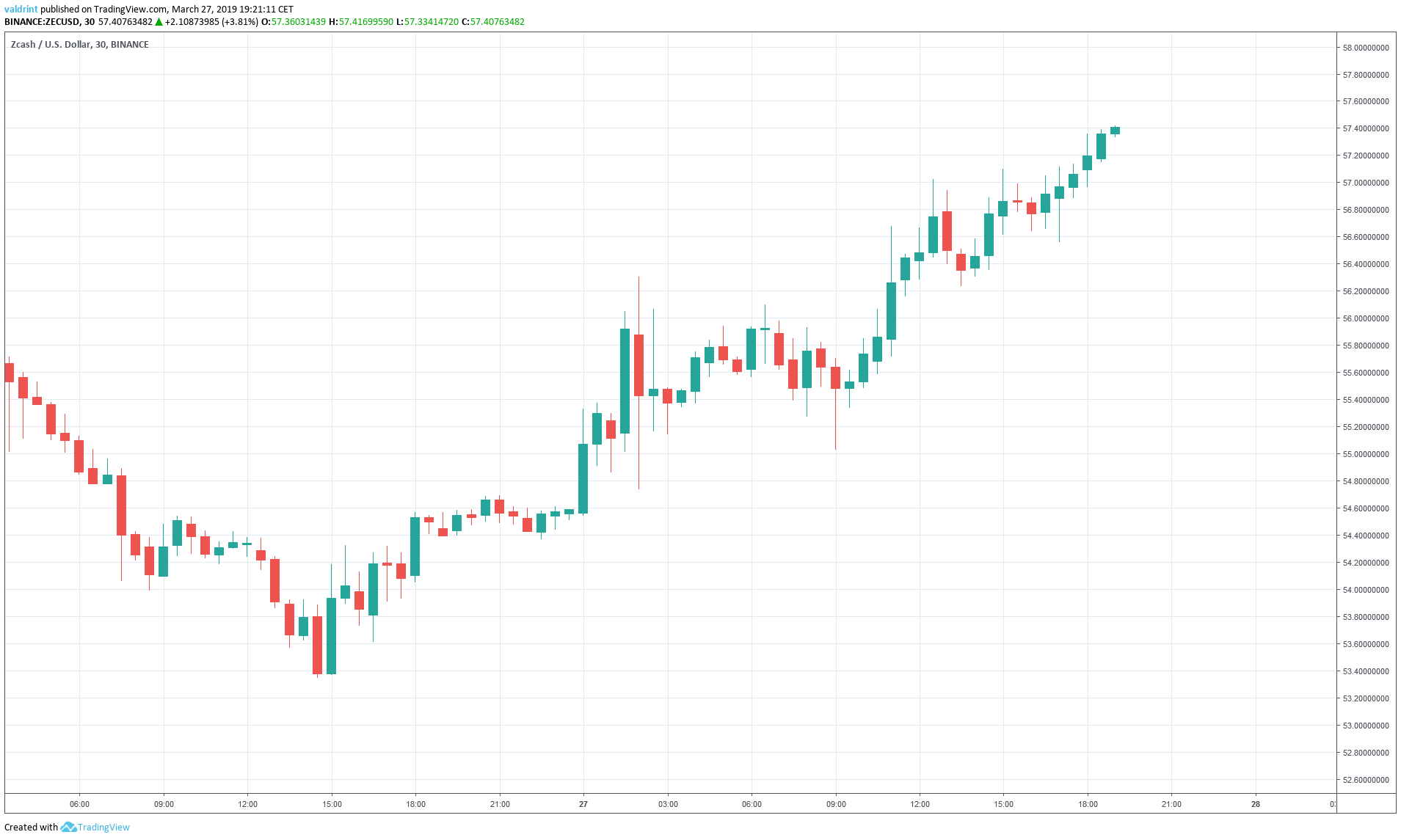 Based on today’s analysis, we predict that higher prices for Zcash may be expected. However, it is possible that price losses may occur before the upward move begins.

To begin, we trace Zcash’s current trading pattern by defining resistance and support lines. To do this we examine the price of ZEC on Binance is analyzed at thirty-minute intervals from Mar 26 to Mar 27.

The price made a low of $53.60 on Mar 26. A gradual upward move followed. Several market cycles have been completed since and after each one the lows have been higher than the preceding ones. 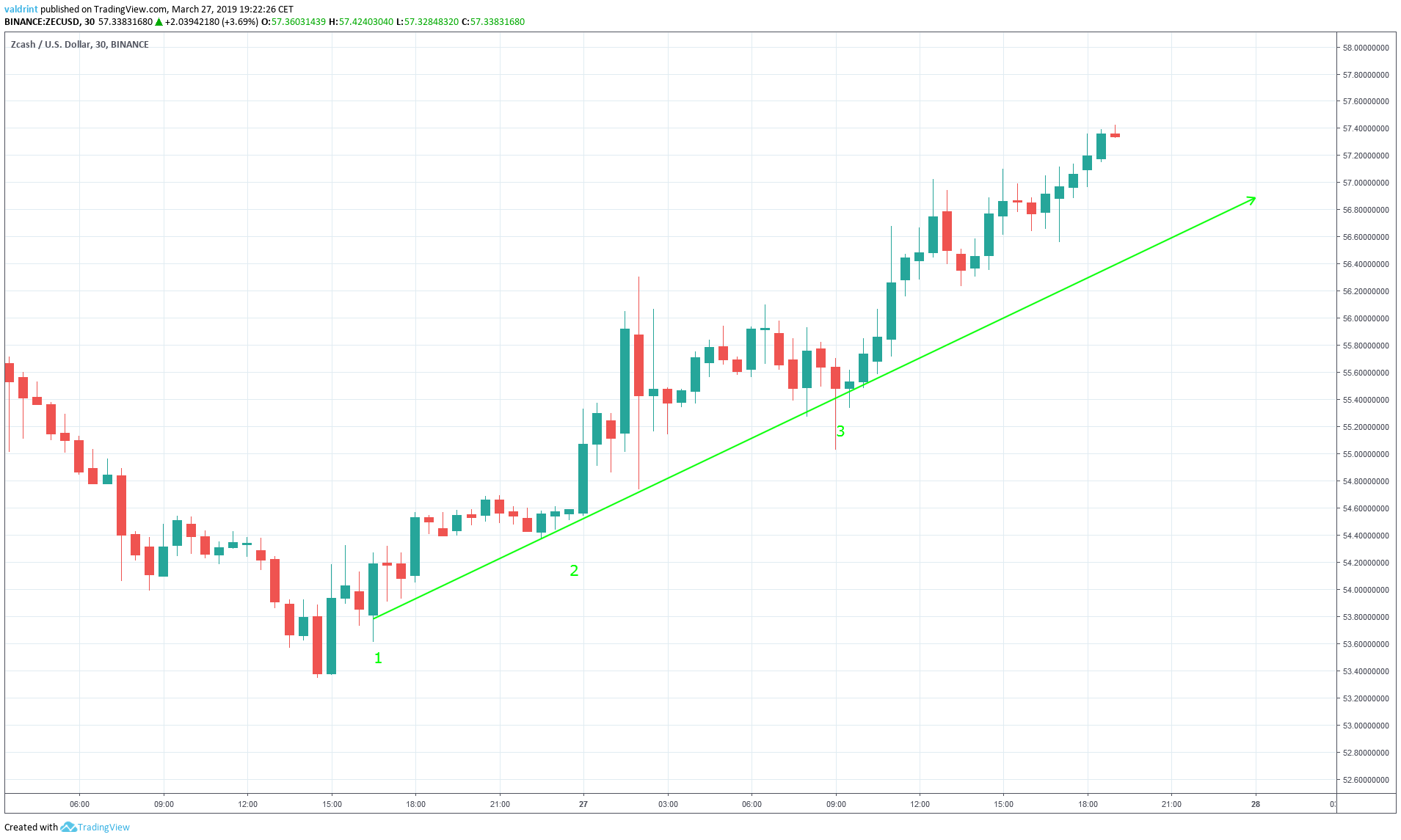 The support line can act as a floor to price, preventing further downward movement. It theoretically traces the lower limits of price over a given period of time.

During this period, several market cycles were completed. At the peak of each, a higher high was made. Tracing these highs gives us an ascending resistance line: 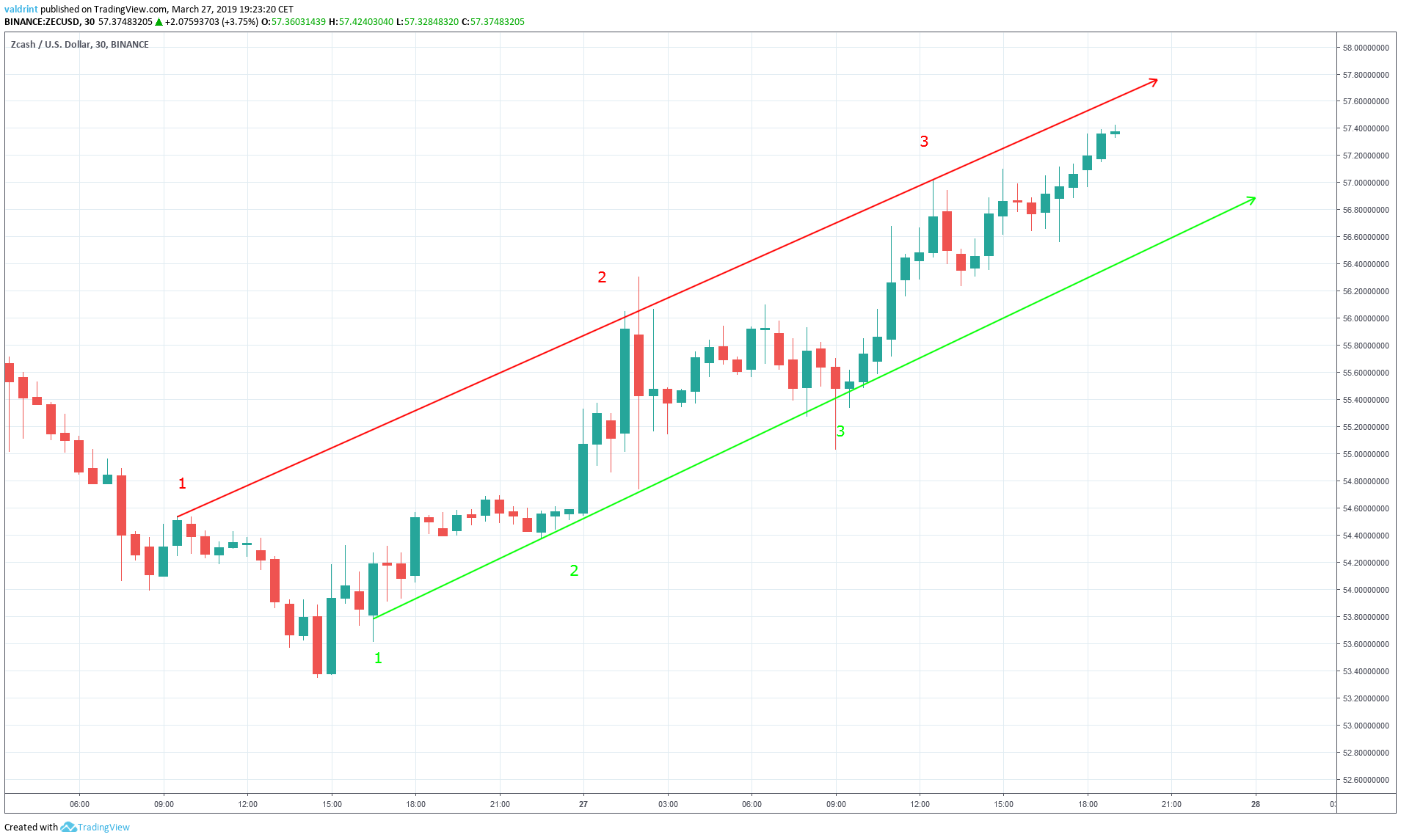 Similar to the support line, the resistance line can act as a ceiling to price, preventing further upward movement. Together, the resistance and support lines combine to create an ascending channel. This is a generally neutral trading pattern. Prices are likely to increase and decrease within the channel over time.

However, the channel is upward facing. This means that despite short-term highs and lows, long-term growth should be expected.

Because Zcash is currently trading near the resistance, a drop back toward support appears likely. The next low may validate the resistance line for the fourth time.

At some point, a breakout above support or breakdown below resistance remains possible. To determine future movements within, above, or below the channel, we must incorporate technical indicators into our analysis.

About RSI: The relative strength index (RSI) is an indicator which calculates the size of the changes in price in order to determine oversold or overbought conditions in the market. 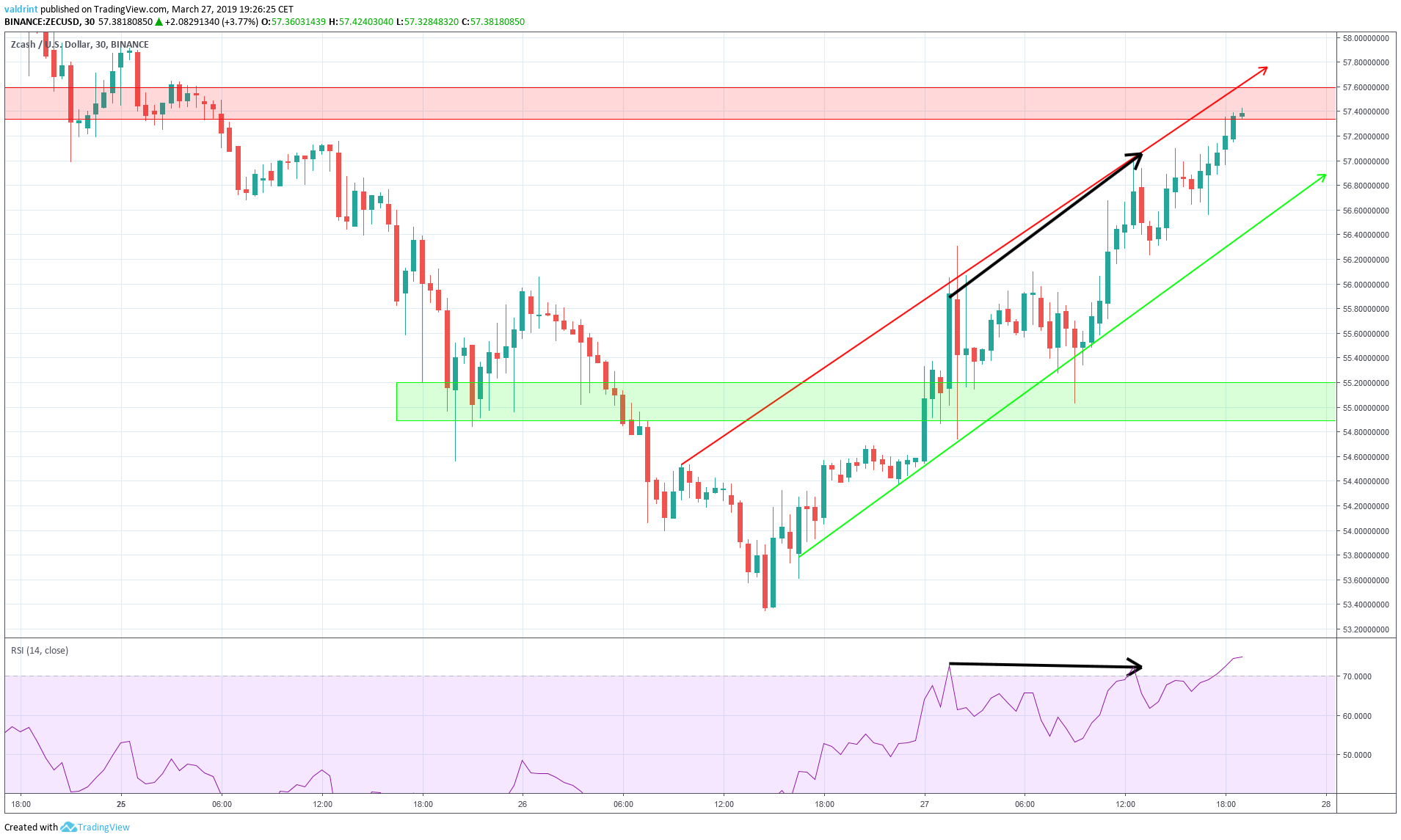 On Mar 27, the price made a high of $56.30. It reached a higher high of $57 later that day. Similarly, the RSI made its first high during the same interval. However, it proceeded to create a similar, slightly lower high.

However, it is not significant in value and is occurring in a neutral pattern, reducing its validity.

The use of this indicator is not sufficient in predicting whether or not a breakout or breakdown will occur. It also does not aide in determining whether price will move up or down within the channel.

To further assess future price fluctuations, we must analyze Zcash on a longer times frame. In order to do that, we need to take a look at a longer time frame.

We now examine the price of  ZEC on Binance is analyzed at two-hour intervals from Mar 18 to Mar 27 in order to better visualize previous market movement. In addition, we incorporate trading volume into this part of the analysis.

About Trade Volume: Volume is a measure of how much of a given asset is traded for a period of time. It can be used in combination with breakout or breakdowns in order to confirm the validity of a movement.

Tracing the highs during this period gives us a descending resistance line: 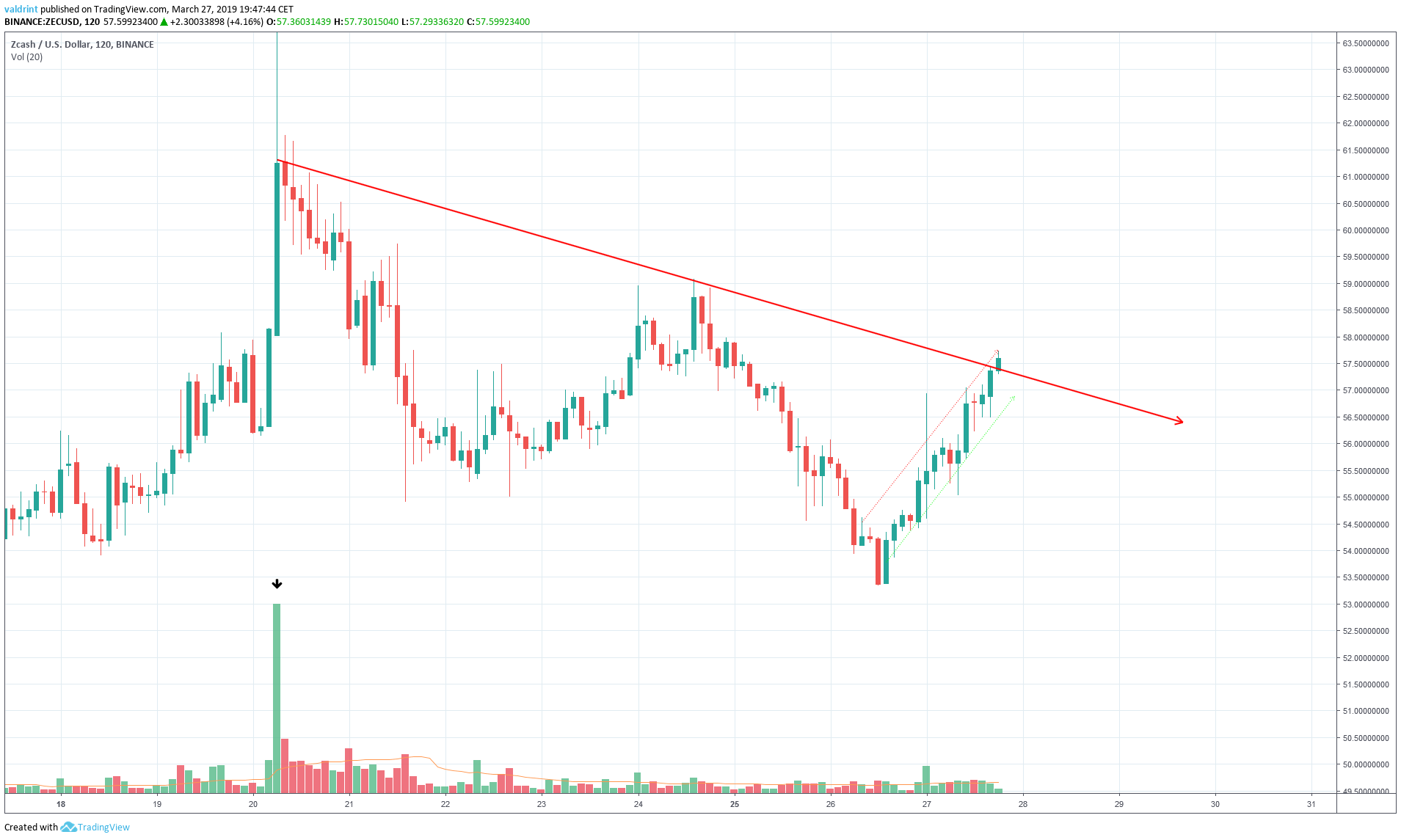 On Mar 20, the price made a high of $63.70. Around the time that this high was reached, there was a significantly higher volume. Susbequently, trade volume dropped and so did prices.

Such an occurence does not now appear to be occuring. Volume appears to be near normal levels. While it appears that Zcash may in the process of a breakout, it is too early to be certain.

The level of volume—which otherwise could be an indicator—is only partially helpful. Given that the level of trading is significantly lower than before the Mar 20 and subsequent decline, we can predict a different sort of behavior.

A crash seems unlikely as long as volume continue trading at normal levels. Because these levels of volume have been carrying Zcash to higher highs, we might expect this to continue. However, sudden shifts in volume might cause sudden shifts in price—either up, down, or both.

We are currently predicting increases based on the current pattern. It is possible that Zcash will break

Now we will attempt to determine possible resistance and support areas for Zcash. These are formed when the price reaches a certain level several times. They can act as a ceiling/floor that prevents the price from moving further in that direction. 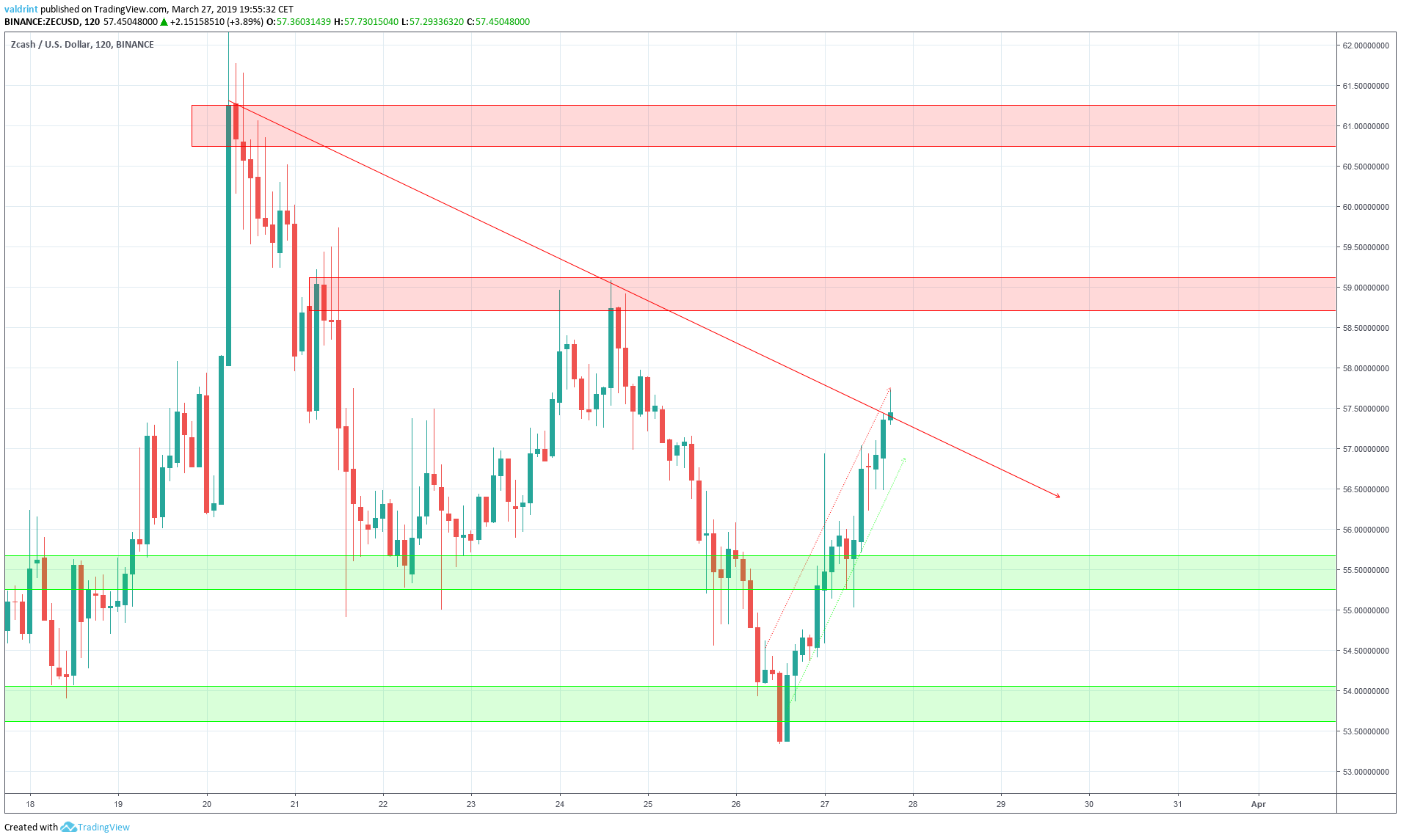 The first resistance area is found near $59. The second one can be found near $64. If the price keeps moving upward, they will provide likely reversal areas. Based on our analysis, it is likely that the price reaches at least one of these areas. If the $59 level is breached, we may see Zcash reach $60; however, it might subsequently drop before reaching the second support of $64.

The closest support area is found near $55, followed by the second one near $53.5.  Based on our analysis, it is unlikely that the price will stabilize around this area unless there are significant fluctuations in the volume of ZEC traded. However, prices may drop toward these support areas before a susbequent rise toward $60.

Based on this analysis, the price will likely continue increasing in the near future. However, it is possible that it first drops to the temporary support of around $55 before prices rise toward $60. If the price reaches the first resistance area near $59 without a prior drop, our prediction will be partially validated. However, a drop toward the support followed by a rise toward the resistance would fully validate the prediction. A breakdown below $54 would invalidate the prediction.

Do you think the price of ZEC will increase to the second resistance level of $64? Let us know in the comments below.

ZCash Is the Worst Performing Proof-of-Work Cryptocurrency in 2019

Altcoin News 10 months ago
No Result
View All Result