Will Bitcoin Survive a Crypto Crash Like Amazon After The Dotcom Bubble?

Some companies that survived the ‘Dotcom Bubble’ ended up making spectacular recoveries and yielding immense percentage gains in the years that followed. In the event of a burst in the crypto market bubble on a similar scale, will Bitcoin

BUY NOW be able to pull through?

After the Dotcom bubble burst at the beginning of the 2000s, many ‘New Economy’ companies were left on the verge of extinction — or wiped off the map, entirely. Companies like Amazon (AMZN) and Corning Incorporated (GLW) lost nearly 99 percent from their early-2000 highs.

It would not be surprising to hear that a majority of investors, analysts, and reporters from the Dotcom era would be proclaiming the death of cryptocurrency (again) in the scenario of a similar Black Swan event in the digital asset market.

Bitcoin (BTC) is certainly no stranger to premature proclamations of its demise from naysayers and capitulators. Bitcoin has been reported as ‘dead’ more than 320 times since its inception, with its most recent obituary handed down by repeat offenders Jamie Dimon and Warren Buffet.

Bitcoin has indeed had its fair share of flash crashes and extended bear markets but has, thus far, never failed in rewarding the patience of investors who took the opportunities to buy during its times of struggle.

While the majority of investors were scared off after the Dotcom crash, others combined patience and research with a little bit of luck and saw a massive opportunity to accumulate.

Companies like Amazon (AMZN), Cisco Systems (CSCO), and Corning Incorporated (GLW) have all managed to bounce back — even after experiencing 86 to 99 percent losses from their previous all-time highs. In hindsight, the crash wiped out all the vaporware and projects riding the coattails of the Dotcom hype train and trimmed the fat from the bloated and overvalued market.

Since bottoming out in 2001-2002 after the crash, stocks like Amazon (AMZN) and Corning Incorporated (GLW) have climbed their way back up gaining nearly 37,000 percent and 1,190 percent respectively. 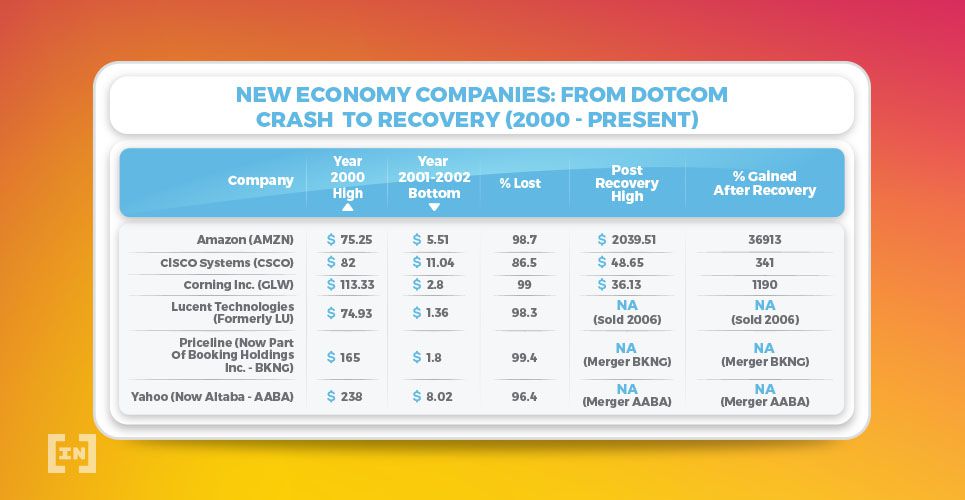 [bctt tweet=”So many parallels can be drawn between the cryptocurrency market throughout 2017 and 2018 and the Dotcom crash in the stock market in the year 2000.” username=”beincrypto”].

Only the strong projects with solid fundamentals and real-world use cases survived the Dotcom crash, similar to the altcoin and ICO culling that has taken place over the past year. Values of cryptocurrencies have been slashed across the board and, for some, the cuts will be too deep to recover.

Bitcoin is currently down 78 percent from its all-time high of $19,950 in December 2017. While 78 percent is still a stretch from the 90 percent and higher drops experienced during the Dotcom crash, some investors are looking to take advantage by filling their bags at ranges of maximum profitability.

Do you think many cryptocurrencies would survive in the long run if there was a similar Dotcom scale crash in the cryptocurrency market? Could they potentially all be washed away and replaced by a completely new market? Let us know your thoughts in the comments below!