Double Standards are a B****: #DeleteCoinbase Takes Over Twitter

The #DeleteCoinbase movement is firing up Crypto Twitter — but, for cryptocurrency exchange Coinbase and CEO Brian Armstrong, it’s just business as usual.

Coinbase has been making blunder after blunder to start the New Year.

On Feb 12, 2019, the US-based platform announced a new feature that allows users to store their Coinbase Wallet

What could possibly go wrong?

Backup to your personal iCloud or Google Drive, and explore the open financial system with peace of mind. https://t.co/6uaHT8AZky

Luckily, the cloud backup is optional and the user has to opt-in to activate the service — at least, for now.

Surveillance on the Public Blockchain

One week later, on Feb 19, 2019, Coinbase announced the acquisition of a blockchain intelligence company named ‘Neutrino.’

Today we're announcing Coinbase has acquired Neutrino, a blockchain intelligence platform. Neutrino's technology is the best we've encountered, and will play an important role in legitimizing crypto, making it safer and more accessible for everyone. https://t.co/6gXcRvpEBM

On Feb 25, 2019, the exchange brought forward another piece of news that would ignite a fire among the cryptocurrency community — namely, that XRP would finally be listed.

It apparently didn’t matter that Coinbase CEO Brian Armstrong tweeted out four years ago that ‘Ripple is a distraction’ and meaningless in the grand scheme of things. It didn’t even matter that XRP is one of those pseudo-decentralized ‘cryptocurrencies’ in the market that seemingly violates the company’s written principles. Nope — the coin got listed anyway!

In midst of the controversial listing, a report related with the newly-acquired company ‘Neutrino’ poured gas into the fuming fire. It seems many members of Neutrino were part of the Hacking Team, a controversial IT company that worked with repressive governments such as Sudan, Bahrain, Venezuela, and Saudi Arabia.

This fact apparently didn’t matter for Coinbase. The company appears much more interested in ‘legitimizing crypto,’ surveilling its customers and garnering the approval of the US government.

The cryptocurrency community was appalled by the news and, to voice their rage, it created a movement simply called #DeleteCoinbase.

To join this movement, all you have to do is delete your Coinbase account, take a screenshot of the result, and post it on Twitter, along with the hashtag.

It’s easier said than done, however, as the process is quite tedious if you don’t meet all the required criteria. 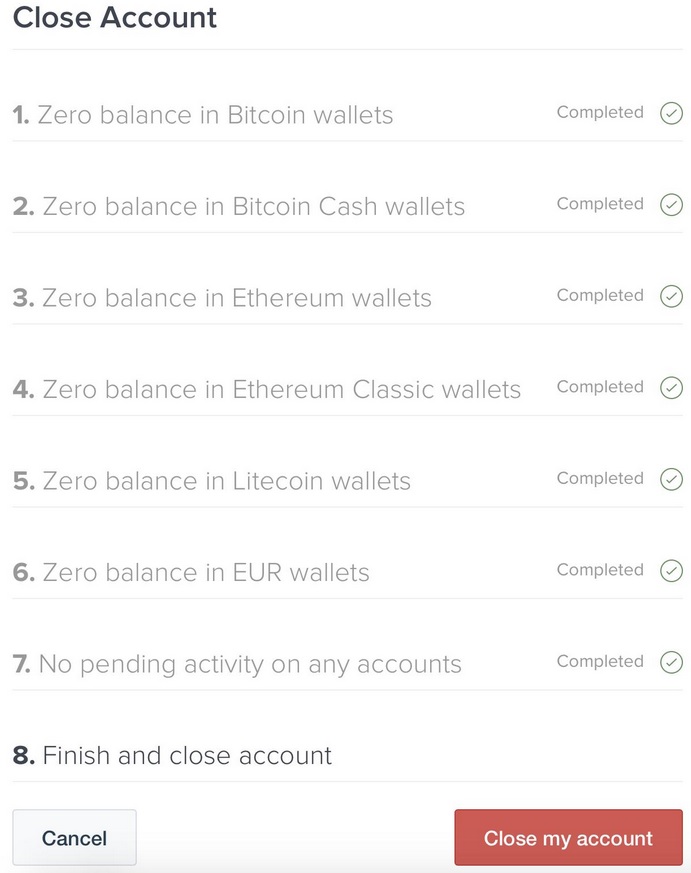 There are many accounts that don’t have a zero balance, but not enough to transfer their cryptocurrencies into other wallets (there is a minimum withdrawal on all exchanges, to cover the fees). These are ‘dust accounts’ and they pose a problem for many unhappy customers.

With the ‘dusting’ problem out of the way, #DeleteCoinbase took off over the last couple of days.

However, recent reports tell stories about delays in the account deletion process.

One specific report shows a support response that mentions the need for a specialist to solve a simple deletion request and a five-to-seven-business-days wait for the request to be solved.

Business As Usual For Coinbase And Brian Armstrong

In the meantime, CEO Brian Armstrong is busy tweeting about how to create a brand and how to improve scientific research. Interestingly enough, in his brand tweetstorm, there is no mention whatsoever of double standard methods to engage your audience — or is this a lesson of how to actually destroy a brand?

If his company keeps it up and continues to move away from Bitcoin’s true principles, just for the sake of mainstream conformity and government approval, then Brian Armstrong could (and should) definitely post a tweetstorm about brand demolition.

The fire has already been lit and is slowly but surely burning Coinbase from the inside out.

Do you have a Coinbase account? Are you a part of the #DeleteCoinbase movement? Can the exchange survive with such business decisions? Share your thoughts in the comment section below. While you’re at it, check out our honest Coinbase review!

[Editor’s Note: The opinions reflected in this article are solely those of the author and do not necessarily reflect those of BeInCrypto or its staff.]

I started out in print journalism in 2008 and switched to freelancing two years later. Afterward, I covered the poker and gambling scene for several years before getting into sports and motivational stories. Crypto-wise, I first learned about Bitcoin just months after the Mt. Gox event. I’ve been riding the bulls and the bears ever since. Crypto skeptic given today’s overall market structure with a cynic dystopian view of the foreseeable future. Email me!