Cryptocurrency Can Fix a Sinking Economy, Even as Stock Market Booms

Anyone paying attention to financial news couldn’t have missed that the stock market is on its longest bull run in history. But is this always a good thing, and how can cryptocurrency factor in?

This is often reported as though it is good news for the economy, but the opposite is the case. The only real question is how a new system, powered by decentralized assets, may help to turn the global economic landscape of tomorrow into one of equality and stability.

Recently, national correspondent at The Week, Ryan Cooper, made a case for just how the current rise in the stock market is actually a measure of the growing wealth inequality and not a useful metric for the entire economy. In a nutshell, Cooper lays out how even though 55% of Americans are invested in the market, in truth just one-tenth of the nation’s citizens are holding over 86% of all assets.

The next tenth owns only 9%, and the following tenth about 2%. The numbers become negligible lower than this, meaning that the current health of the stock market is really just measuring the accumulation of wealth in the highest echelons of our economy.

How Did We Get Here?

This has all happened because the market and economy are no longer run the way they were intended, hence why cryptocurrencies came to be. Originally, owning stock was seen as a way to share the value a company generated. However, in the last several decades the focus has shifted towards securing increasingly high profits for shareholders, at the cost of employee’s wages and quality of product.

Due to this, most major companies are now paying their workers the very least they can, offering products and services that have seen minimum acceptable funding, yet every year are offering larger returns to investors. As Cooper explains:

“The fraction of GDP going to labor has fallen sharply since the 1980s, while the fraction going to corporate profits has increased sharply, and the share of income and wealth taken up by the very rich has skyrocketed.”

You can actually see on the charts more or less how the ’80s kicked off a period of growth in the market that has largely carried on since, with only a few hiccups. 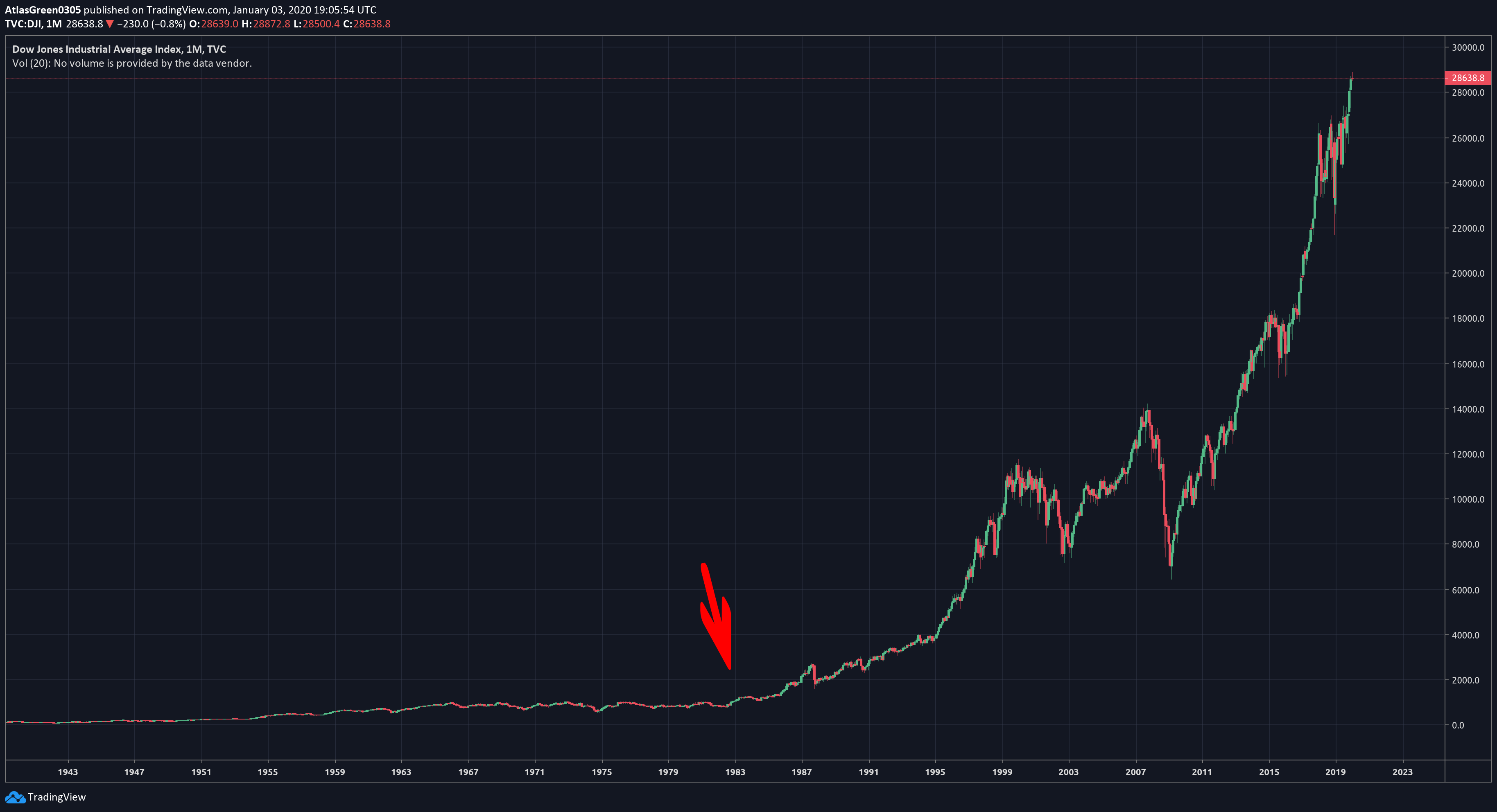 How Can Cryptocurrency Fix This?

BUY NOW and its brethren were literally created as a response to this type of excess, it remains unclear if they can usher in a better economic era. One of the promises of decentralized technology is that no single authority should be able to control the money supply, and some assets like Bitcoin seem to be doing a decent job of providing this.

If existing and future projects can disseminate to mass adoption before “old-money” gets too involved, then perhaps the transfer of wealth that cryptocurrency fans dream of could really occur. However, there is another possibility.

Realistically, the legacy system and Wall Street aren’t just going to go away because of Bitcoin. Exactly what will happen remains unclear, but there is no shortage of evidence that the existing financial behemoth is beginning to take cryptocurrency seriously, and may already be working on means to hijack the assets for themselves.

Combine this news with the troubling stance that China has been taking towards blockchain, and it is clear the “old world” has no intention of rolling over without a fight. Whether the next generation will know a society where wealth moves freely and is rarely amassed or a dystopia where the few continue to control the many, remains to be seen.

90 Percent of Cryptocurrency Firms May Be Bankrupt in Six Months: Swiss Blockchain Federation
#Companies News 4 weeks ago
Up Next
FDA Places Ban on Most Flavored E-Cigarettes
Regulation News 5 months ago
Related News

US Stocks Surge on Worse Than Expected Jobless Claims

Bitcoin’s Crash May Be an Indicator of What’s to Come for the U.S. Stock Market

Cryptocurrency Growth Could Be Spurred by 2020 Economic Stimulus Efforts

Warren Buffett Says He May Create a Cryptocurrency

How to Tell If a Bitcoin Bear Market Is Coming