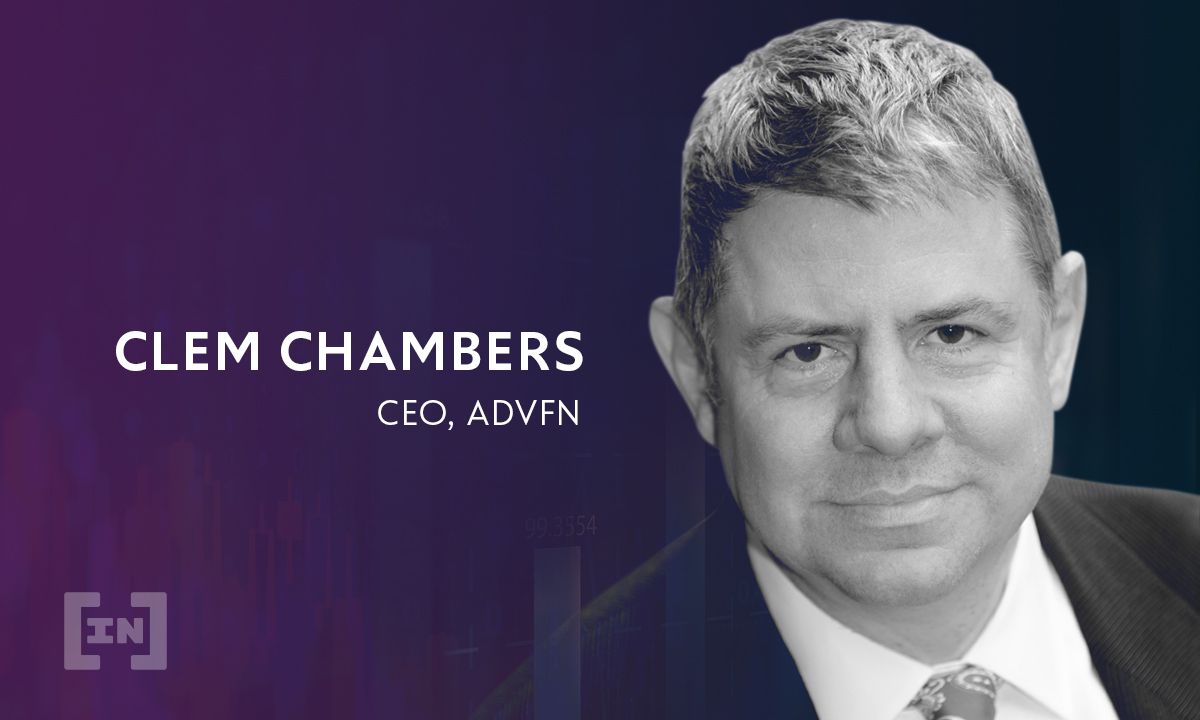 BeInCrypto recently caught up with Clem Chambers, an entrepreneur and technology pioneer, and the CEO of Online Blockchain Plc, the first and only UK blockchain tech product development company listed on the London Stock Exchange’s Alternative Investment Market.

It was 2014 when journalist and author of financial books and thrillers “The Armageddon Trade,” “The Twain Maxim Kusanagi,” and “The First Horseman” Chambers first encountered cryptocurrency. “The technology was interesting, so I looked into it. It looked interesting and I wanted to buy bitcoin (BTC),” shares Chambers.

At the time, Chambers — who is also the CEO of financial markets website ADVFN.com and a Forbes columnist — however, didn’t even know where to buy BTC and, thus, ended up on the infamous Silk Road site. The platform was a darknet market operated as a Tor hidden service, where users could make purchases anonymously. Chambers describes his first experience with the Silk Road:

“I had never been on Tor or the Onion browser, or the dark web. And I went like, wow, I can buy guns, I can buy drugs, I can buy cash – why would I buy cash? That is weird. Oh, I get it and here is bitcoin, that’s what I came for. 70 dollars! I wanted to buy several thousands, but like this? No way, that is too much.”

Bitcoin is a bigger thing

Time moved on, and bitcoin started to be interesting in 2016 again. The price of the leading crypto surged above $1,000 and many thought that bitcoin was nothing but a bubble destined to burst. Still, something told Chambers that bitcoin was a bigger thing, and he decided to buy it.

Chambers was sure bitcoin had gone to the top and would go to the bottom again. But then, the price went under $9,000, and he bought more bitcoin. “And three or four days later, I thought, I should really buy more of this. And three or four days later, the same. In the end, I ended up with investing $7,000 with a ton of bitcoin, because I had been buying average down,” recollects Chambers and continues:

“It went to $16,000 and I had so much of this stuff, I had to sell. Because if you are a market professional, you want to be diversified, you want to be spread across a wide range of assets and, if it is a risky thing like bitcoin, you want to have a little bit of it to balance the not so interesting stuff. And if you are really brilliant, you get a yield of 15%. Or if you are me, 25%.”

Chambers further reminds that people should lower their risk profile, emphasizing that the risk in decentralized finance (DeFi) and Ethereum (ETH) was even more spicy. He took half of his gains and put them in stocks, and part of the other half he put in DeFi deposits, as well as earning ridiculous interests in stablecoins. Eventually, he made more than if he held bitcoin in this period.

“I think Bitcoin is not going to $100,000 at the moment, it could do it. I might be pretty good at this stuff, but the future doesn’t listen to me, markets don’t listen to me, I listen to the market. I just try to minimize my risk and maximize my gains,” Chambers elaborates, adding:

“If you go all in because ‘it’s going to the moon,’ well, the chance of it going to a million within the next four years is about half percent chance. Your chances to win are low. If you don’t understand the mathematics of investment, you are going to lose. Because even in a market that showers money down on you, like crypto, you will still lose, because you have a technically bad position that will kill you. If you don’t understand that, you are going to lose.”

According to Chambers, the best way to deal with the market is to sell some if the price is going high. However, it’s a game of survival, he says, a long-term strategy game. What is going to happen is bitcoin is going to do whatever it does. Chambers believes that even if bitcoin goes to $100,000, even if the top is one million, it is going to come down. “And in four years, when they are halving again, it will go BANG, up and up.”

Chambers insists that crypto is money, bitcoin is money, and ethereum has a monetary element as well. “And anybody who says crypto isn’t money, doesn’t know what they’re talking about. It is money and many of my businesses, which are absolutely tough businesses, take a reasonable chunk of their sales in bitcoin, because it is better, and it is faster,” states Chambers.

Chambers thinks that those who say Ethereum is not fit for its purpose are right. It will probably change with the implementation of ETH 2.0. He continues:

“I try to sell my crypto, the tokens that I don’t want, but I can’t, because they charge you $200 just to move them. And that whole DeFi thing is right now changing everything. That is the next big step, it’s the tip of the sphere of cryptorization, the revolution, the decentralization of the body corporate. Like the industrial revolution. DAO is the next step.”

He got into that last year because as a business he wants to be in DeFi, because “DeFi is like a gold rush.” The ones that do it properly will end up being gigantic, he says and adds, “If you win in this environment, it’s not only helping you, it’s helping the movement.”

Chambers says that our system is a system of gatekeepers all the way up. Per him, it actually doesn’t matter which political party you are, no government is anything other than right wing. There is nothing as a left-wing government.

“Because if you take the anarchist party, and I am sure there is one, there will be bosses on the anarchist party – an oxymoron? All leadership is right-wing. They all tell you what to do, bosses are right-wing. Even the pacifists are going to fight to be on top of the pyramids. Crypto gets rid of all the gatekeepers,” stipulates Chambers and concludes:

“Every state, that is going to integrate crypto, is going to have a rich and efficient economy.”