At BeInCrypto, we provide regular updates of the most relevant and popular cryptocurrencies and digital assets on the market. Today we are going to do an analysis on both Tron and BitTorrent

BitTorrent is the world’s largest peer-to-peer (P2P) filesharing network. It was acquired by the TRON

Monthly airdrops of BTT occur on the 11th of every month until Feb 11, 2025. The first airdrop

Crypto is a rapidly expanding space and new ways to distribute tokens are continually being developed. Airdrops are used by... More occurred on Mar 11, 2019. Anyone who owned BTT prior to this date received free tokens.

These airdrops are scheduled to continue on the 11th of every month until Feb 11, 2025. The next airdrop is scheduled to be on Apr 11.

To learn more about BitTorrent airdrops, click on the green button below:

Now let’s compare the prices of TRON and its pet project. We’ll start with BitTorrent Token:

On Apr 2, the price of BTT reached a high of nearly $0.0083. It reached a similar level on Apr 6. It has been decreasing since.

About the Current Trading Pattern

The price of BitTorrent (BTT) on Binance is analyzed at four-hour intervals from Mar 25 to Apr 10 to define its current trading pattern.

On Mar 26, the price made a low of $0.00072. Several market cycles have been completed and the price has made higher lows each time. 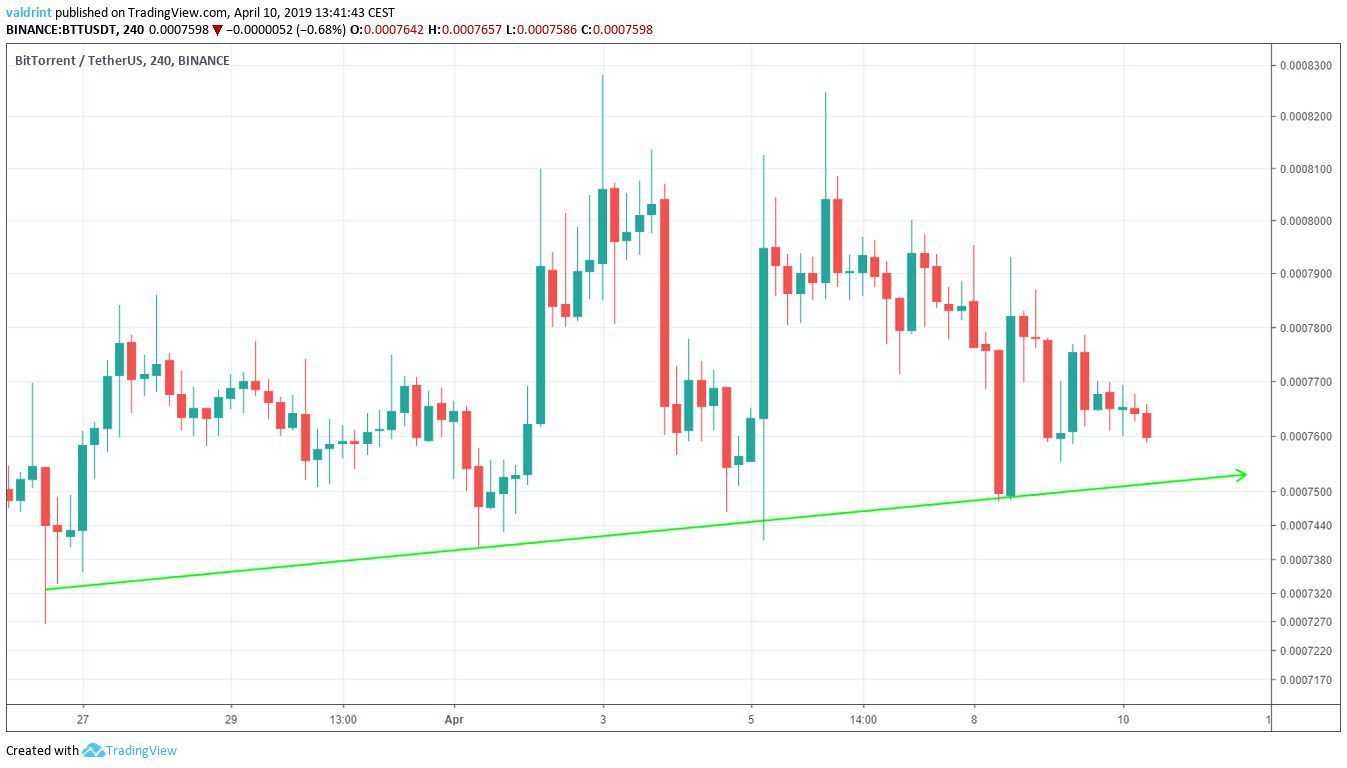 The price of BitTorrent reached a high of $0.00082 on Apr 3. A sharp decrease was followed by a gradual increase. The price has made several lower highs.

Tracing these highs gives us a descending resistance line.

These resistance and support lines combine to create a symmetrical triangle: 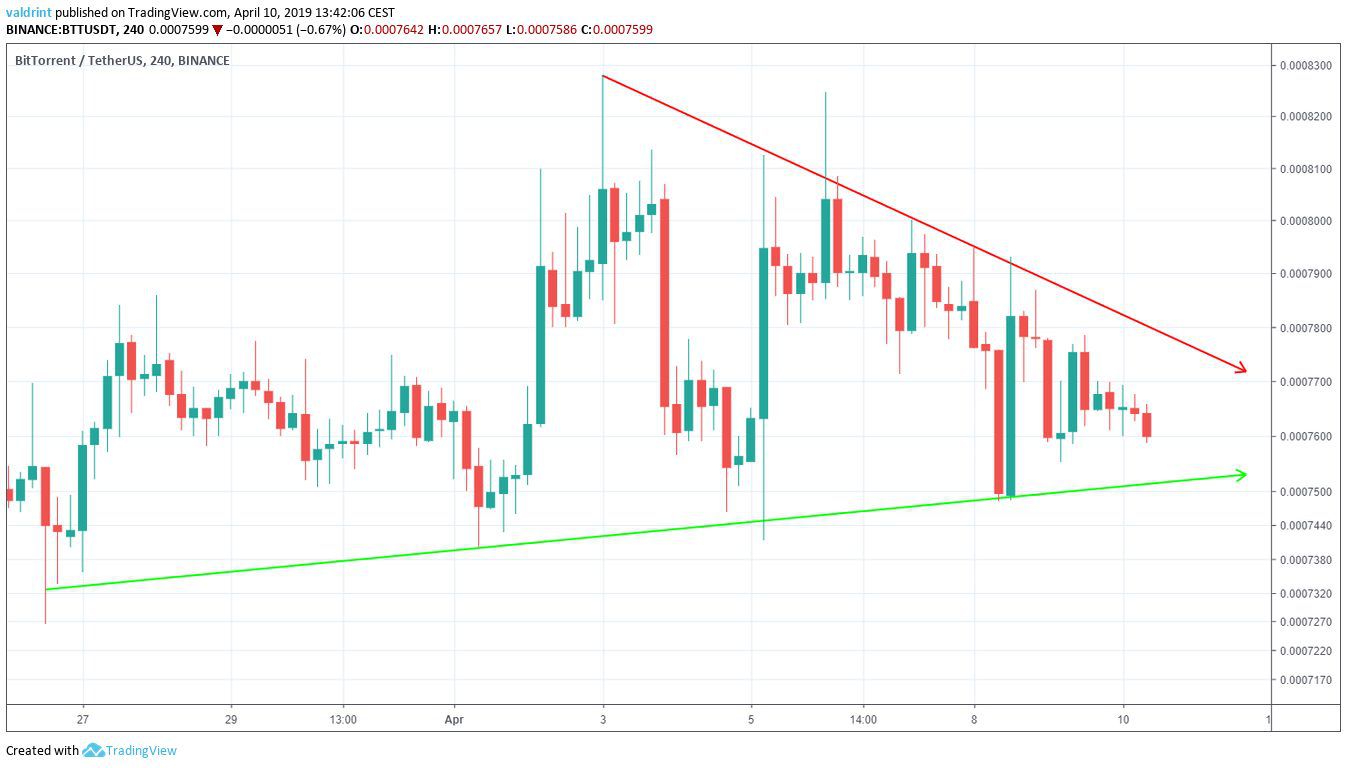 The price is likely to move inside the confines of this triangle until a decisive move occurs.

In order to figure out the direction of this move, we need to take a look at some technical indicators. 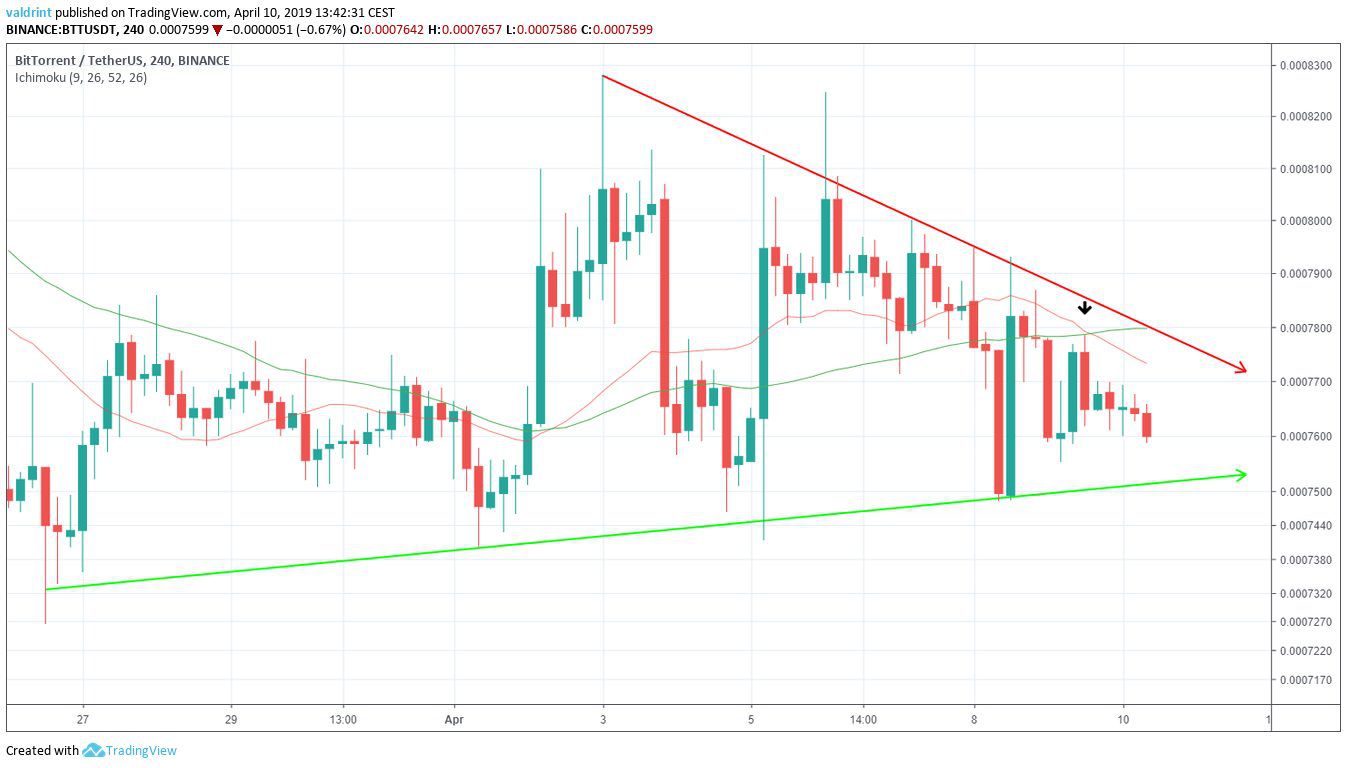 We can see that the price is trading below both of them MAs. Furthermore, on Apr 9, the 20-period crossed below the 50-period MA.

This is known as a bearish cross and often indicates that a new downtrend may have begun.

This confirms that BTT is currently in a downtrend and that price losses are likely forthcoming in the short-term. However, this loss may be postponed because of Apr 11’s airdrop.

During the airdrop on Mar 11, the price of BTT skyrocketed and then plummeted near prior trading levels. Thus, we may see a rapid spike followed by a plummet to current levels.

Then, longer-term losses are likely to be expected along this downtrend.

Another analysis of BTT will be performed on Apr 12 to assess whether the airdrops are beginning to correlate with a regular pump and dump. If such a correlation exists, we’ll continue analyzing monthly airdrops to see if a regular pattern emerges.

We do not believe the airdrop will cause significant deviations from the current trading pattern. Thus, resistance and support areas are incorporated into this analysis based on the symmetrical triangle defined above. 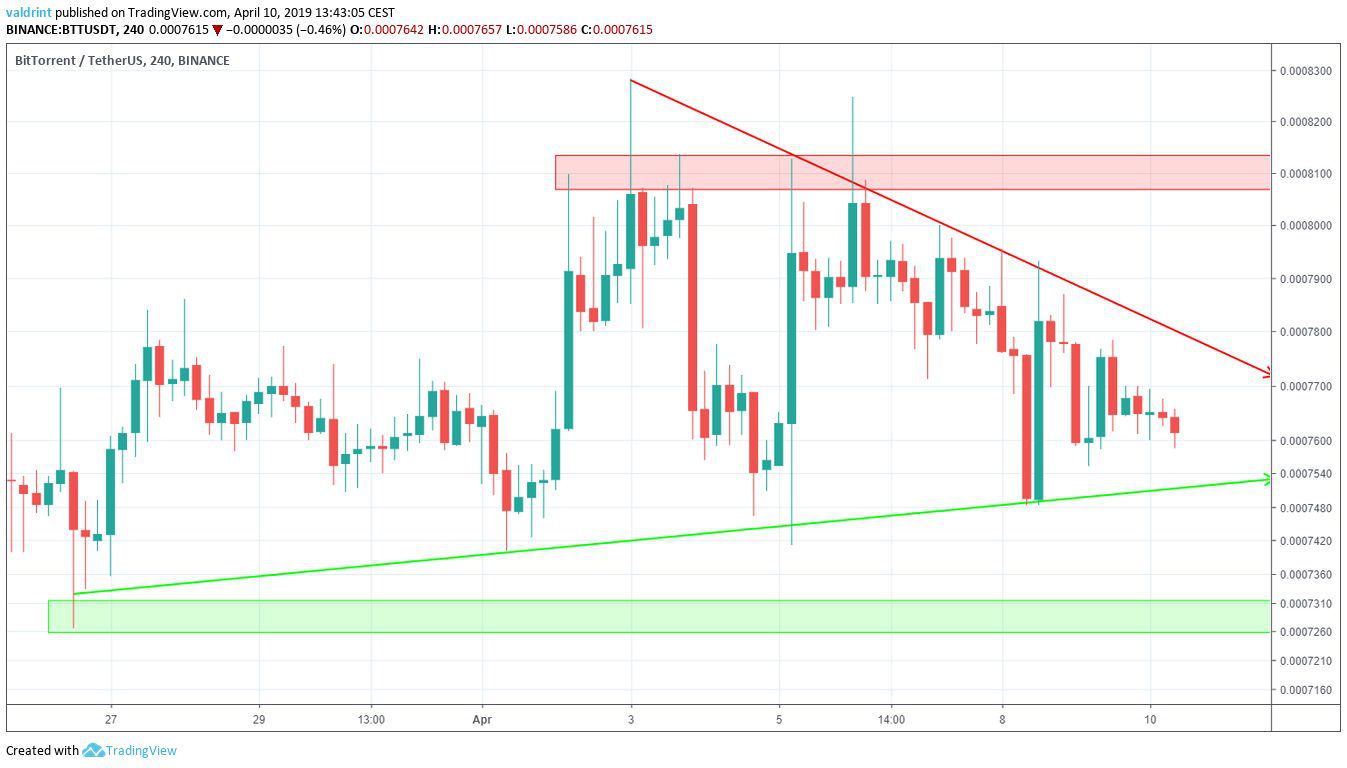 The closest support area is found near $0.000725. If the price breaks down from the triangle, it is likely to provide an area of reversal.

The closest resistance area is found near $0.00081. If the price breaks out of the triangle, it is likely to reach this area.

If the correlation we suggested in the previous section proves valid, the price of BitTorrent Token may spike to or above the resistance level. However, prices would then drop to their current levels within a very short period.

Thus, while the resistance may be met, it is unlikely to be sustained.

Prices are likely to fall toward the support whether or not this spike occurs.

Based on this analysis, it is likely that the price keeps trading inside the confines of the triangle and possibly breaks down following a massive price spike. This could cause a false breakout. Any rapid gains around the time of the airdrop are not expected to be maintained.

Do you think the price of BTT will keep trading inside the triangle? Let us know your thoughts in the comments below.

In our Mar 28 analysis of TRX, we predicted slight increases. Our prediction was validated when the price stayed inside the confines of the triangle we have defined below. A breakout occurred on Apr 2. To learn more, read our latest analysis below:

On Apr 1, the price began a rapid upward movement. It eventually reached a high of $0.32 on Apr 8. It has been decreasing since.

Will the price trade above the highs reached on Apr 8? Let’s find out

We begin our analysis by defining Tron’s current trading pattern. We do this by analyzing the price of TRX on Binance at two-hour intervals from Apr 2 to Apr 10.

Tron reached a low of $0.023 on Apr 2. A gradual increase in price ensued. Several market cycles were completed with each low being higher than the previous one. 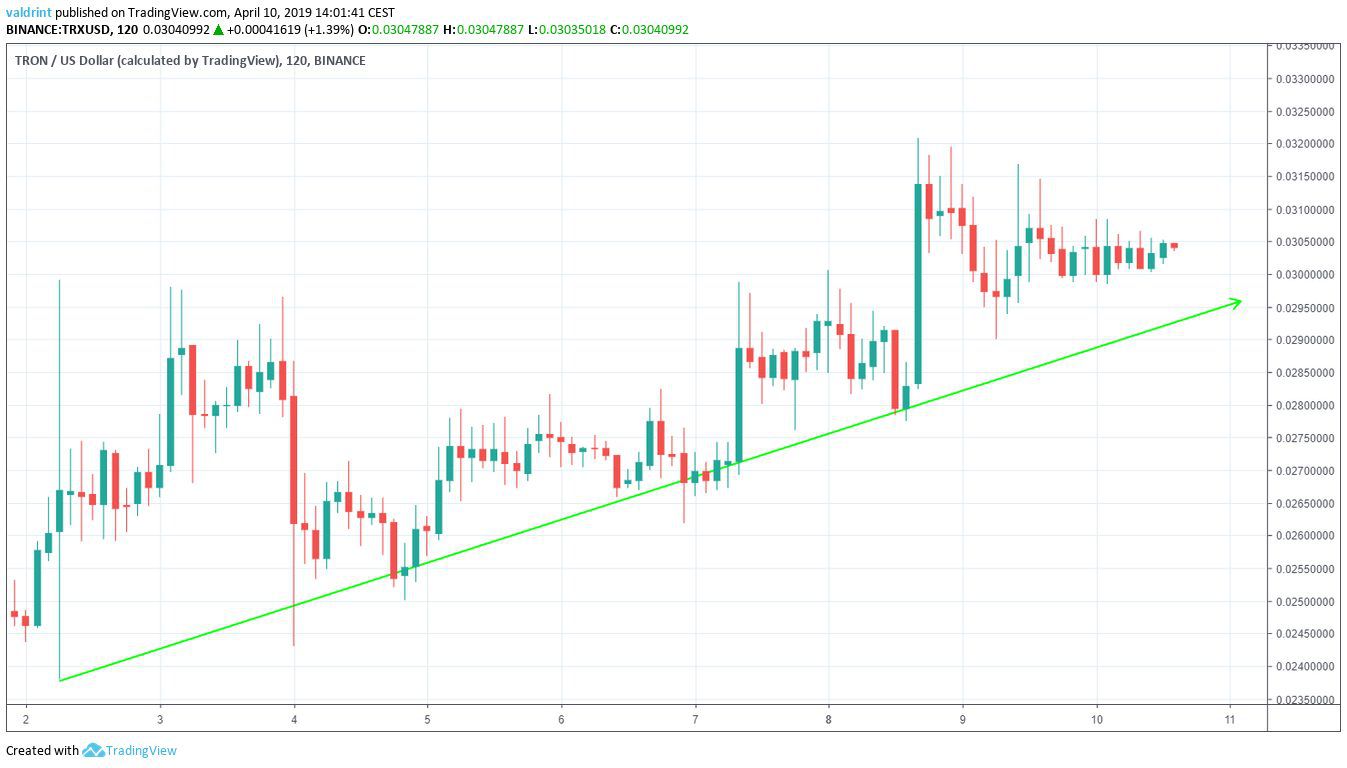 The price of Tron reached a high of $0.028 on Apr 2. It has been increasing, creating several higher highs.

Furthermore, the resistance and support lines combine to create an ascending channel: 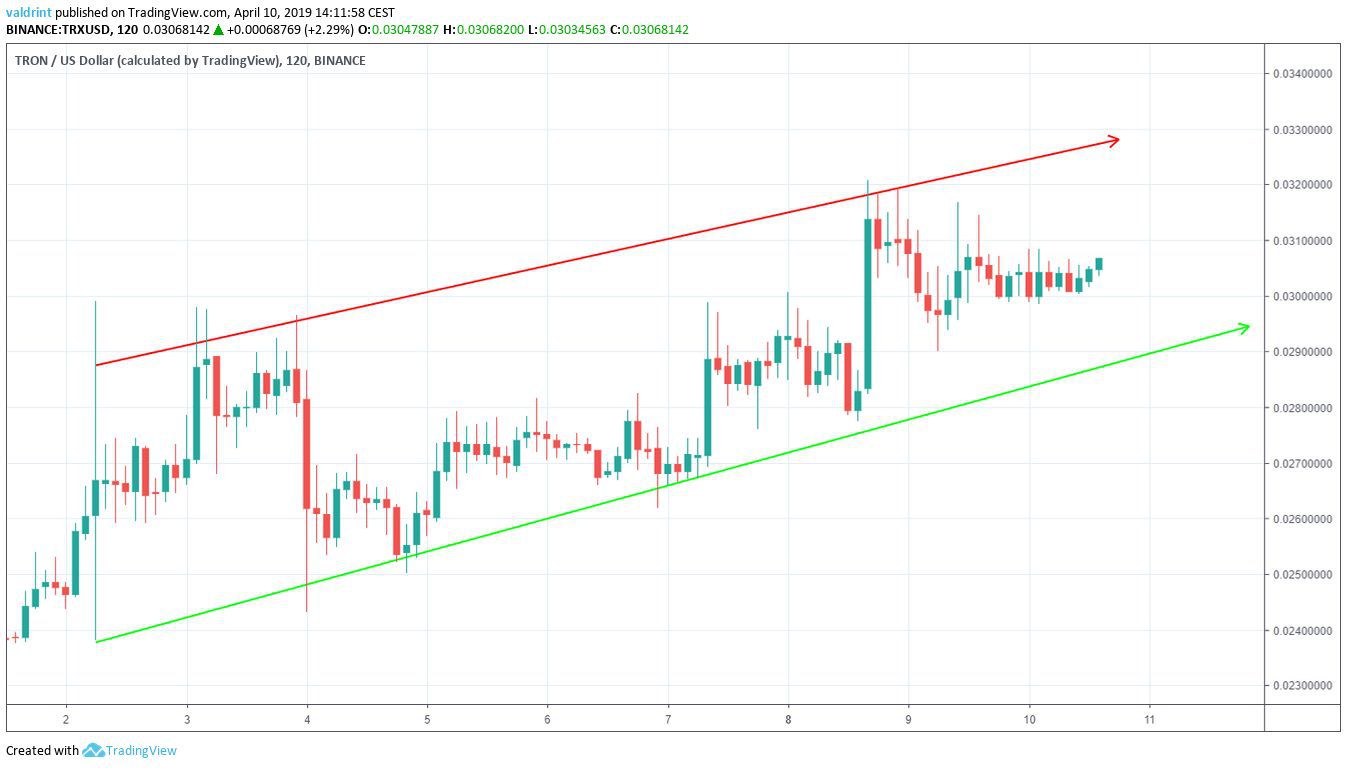 This channel is a generally neutral trading pattern. Price is expected to rise and fall between support and resistance.

To better determine the future movement of Tron, we analyze its price at 12-hour intervals from Nov 2018 to Apr 2019 alongside the relative strength index (RSI).

About the RSI: The relative strength index (RSI) is an indicator which calculates the size of the changes in price in order to determine oversold or overbought conditions in the market.  Combining RSI bullish/bearish divergence with support/resistance essentially predicts price fluctuations.
RSI is shown below price in the chart below: 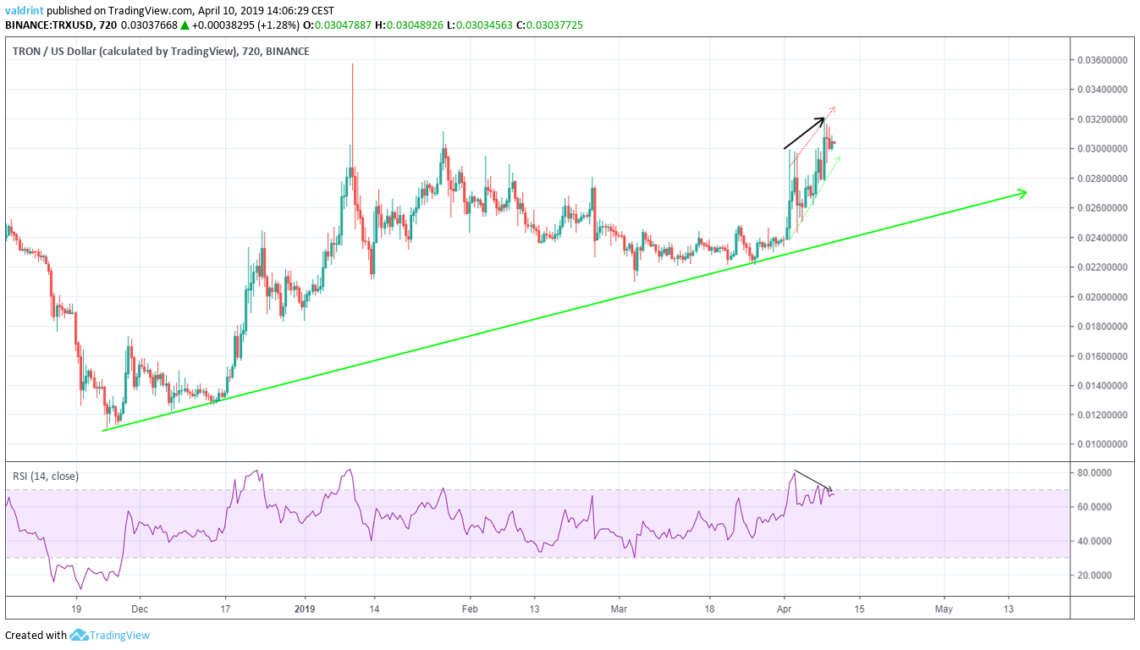 The channel we have outlined in the section above is drawn in dotted lines.

Similarly, the RSI made the first high on Apr 2. However, it has generated lower values since.

This suggests that TRX may drop toward the support line of the channel. However, it is also possible that the BitTorrent airdrop may lead to noticeable short-term rises before continued losses.

About Resistance and Support Areas: Resistance and support areas are formed when the price reaches a certain level several times. They can act as a ceiling/floor that prevents the price from moving further in that direction. 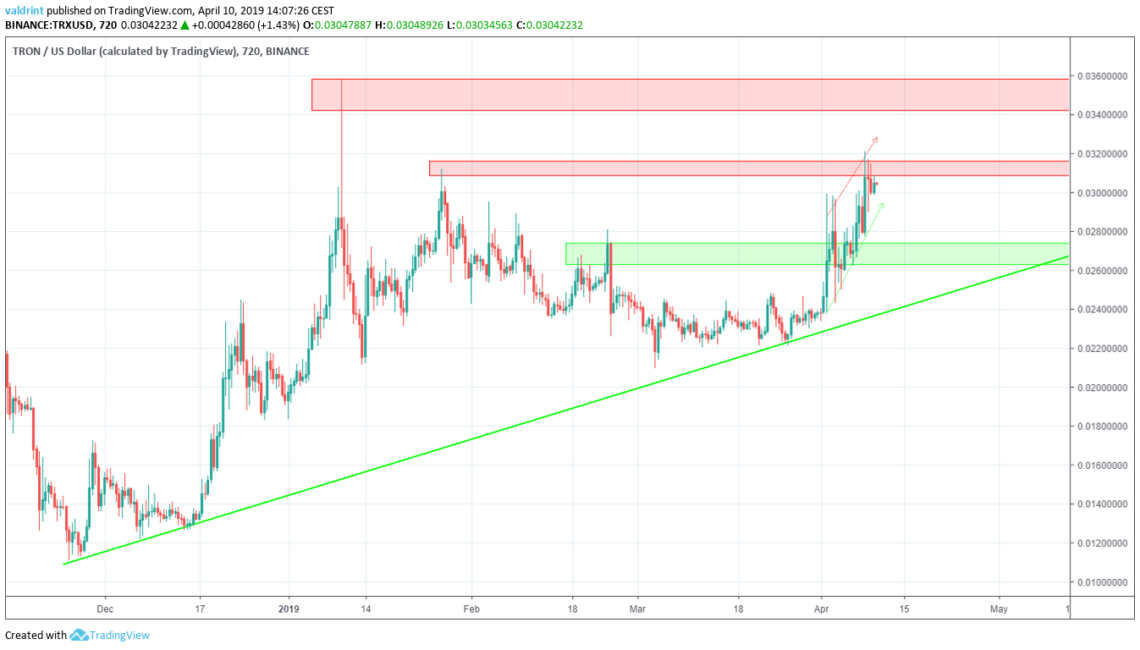 The closest support area is found near $0.027, coinciding with the long-term support line. We believe the price will eventually reach this area.

Based on this analysis, it is likely that the price will break down from the channel and drop to the long-term support line.

Do you think TRON will break down from this channel? Let us know your thoughts in the comments below!

90 Percent of Cryptocurrency Firms May Be Bankrupt in Six Months: Swiss Blockchain Federation
#Companies News 1 month ago
Up Next
Bitcoin Not Making Smart Use of Its Block Space
Bitcoin News 1 year ago
Related News

Altcoin News 3 months ago
No Result
View All Result