New York-based research firm Messari has released a new report exploring the possibility of redirecting a mere 1% of all institutional money away from traditional assets and into Bitcoin.

According to Messari analyst, Ryan Watkins, the scenario could lead to inflows worth hundreds of billions of dollars, pushing Bitcoin prices well beyond $50,000. 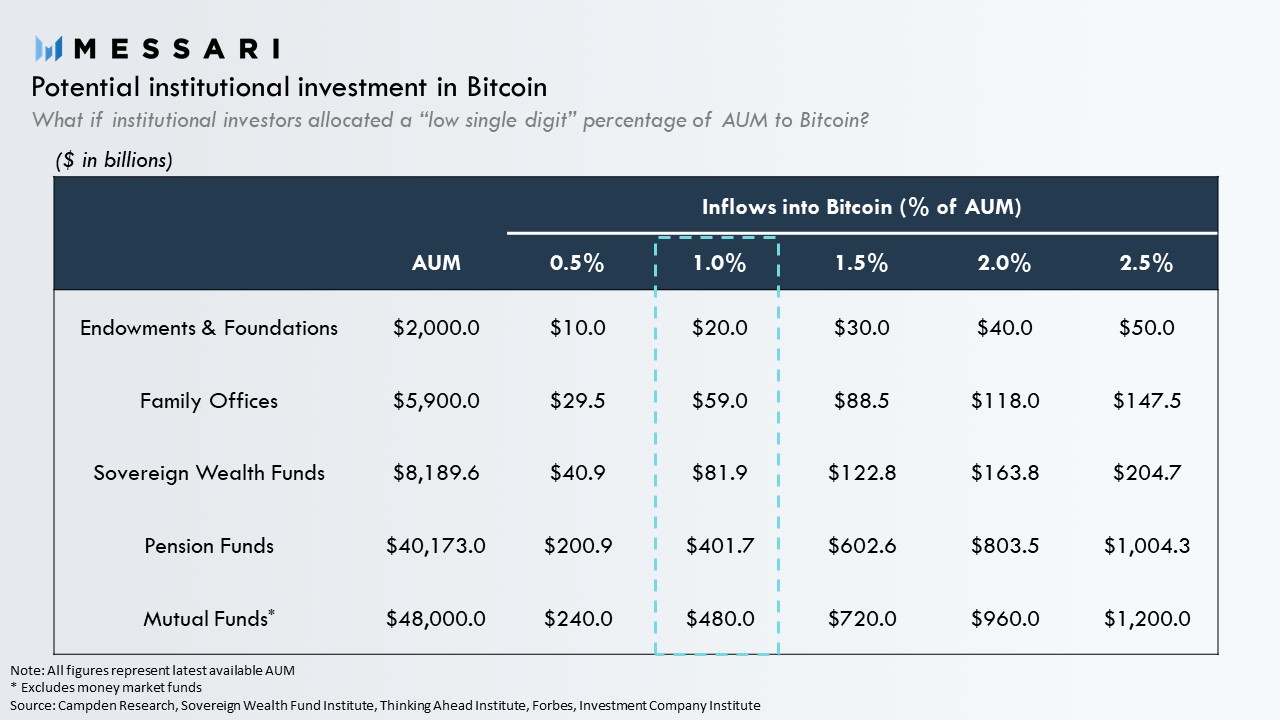 Jones believes that the ongoing pandemic has caused widespread economic uncertainty, with no end in sight for inflation. While he stopped short of disclosing his cryptocurrency holdings, the veteran Wall Street trader hinted that, as of May 2020, his fund holds a ‘low single-digit percentage of its assets’ in Bitcoin.

Messari’s research used the same ‘low percentage’ as a premise, simulating the strategy for all types of institutional funds. According to Watkins, a sudden inflow of capital into assets like Bitcoin would likely cause it to surge by a factor more significant than the incoming capital.

What would this mean for the price of Bitcoin?

As @cburniske previously outlined, flows into and out of an asset do not necessarily result in 1 to 1 moves in the price of the asset, and can be amplified into much larger price movements. https://t.co/eMwjZNIBAJ

Like Jones, it’s worth noting that a significant number of high-profile investors and institutions have already started paying attention to crypto. While a few hedge funds and university endowments have quietly added crypto to their respective portfolios, others have more openly revealed their holdings.

Two prime examples of this are firms like Grayscale Investments and Pantera Capital. The two hugely successful ventures focus solely on investments in digital tokens, blockchain technology, and other emerging crypto-related projects.

In the first quarter of 2020, Grayscale’s flagship product – the Bitcoin Investment Trust – attracted an average investment of $30 million every single week. The Grayscale Ethereum Trust, on the other hand, saw smaller, but still notable gains of $8.5 million.

As of June 2020, Grayscale Investments boasts around $4 billion in assets under management (AUM) spread across three funds. Exposure is limited only to Bitcoin, Ethereum, and a handful of other popular assets.

Other investors included an unnamed university endowment fund, an insurance firm, and Wakemed Health. In light of the fund’s success, Pompliano took to Twitter to proclaim that institutional investors are no longer waiting on the crypto market sidelines.

Indeed, high-profile players like Pompliano and Grayscale are powerful advocates of the digital currency asset class. Using platforms like CNBC and Bloomberg, Pompliano has been able to explain the key advantages that digital currencies offer to institutional investors.

Many large investors have limited knowledge and no previous exposure to the asset class.

Pompliano’s discussions range from Bitcoin’s non-correlated price characteristics to crypto’s viability as a fiat currency hedge and even the role that central bank-issued digital currencies could play in a modern economy.

His efforts have gone a long way towards improving the reputation of digital assets in their eyes.

Messari’s $1 trillion market cap projection would ultimately propel Bitcoin’s price to new all-time highs, similar to the bull runs of 2013 and 2017. When that happens, retail investors will likely not hesitate to join in on the party.

However, given that the crypto market drew sharp criticism after 2017’s exponential price gains, institutions may buy into the asset class slowly. The nascent market is not immune to supply shortages or wild price fluctuations.

Despite these precautions, a handful of accredited investors are not shy of paying a handsome premium over spot prices. According to data from Tradingview, Grayscale’s Ethereum Trust (ETHE) was trading at an eye-watering 950% premium over Ethereum’s spot price.

In other words, traders were paying a premium for the product simply because traders could only get their hands on a limited supply of ETHE on the secondary market. This trend persisted throughout the first half of the year.

Only recently were early investors able to liquidate their positions after the expiry of their one year lock-in period kicked in. This eventually brought the ETHE premium down, though, only still to a sizeable 350%.

Despite a surge in derivative prices, the overall market cap of cryptocurrencies in Q2 2020 has stayed relatively flat. According to Quantum Economics analyst Pedro Febrero, this is likely because many institutional clients are using over-the-counter channels instead of spot markets to procure their crypto.

Unlike traditional crypto exchanges like Coinbase and Binance, over-the-counter platforms have no obligation to disclose transaction sizes, volumes, or other similar metrics. This opaqueness can be a double-edged sword. It prevents mainstream media from unnecessary hype but also hides the cost of true-scale adoption and institutional confidence from retail investors.

Indeed, over-the-counter transactions have historically been the preferred channel for institutional investors, even outside the crypto market. To that end, several high-profile crypto firms such as Gemini and Coinbase have announced their own OTC trading platforms which cater exclusively to the big boys.

While Messari’s latest research does paint an exciting possibility for the future of crypto, it’s worth remembering that the industry still has many challenges to overcome. Thousands of cryptocurrencies are coming to market, and existing projects continue to announce new deals.

The digital currency revolution resembles the early days of the Internet in many ways. Twenty years have passed since the dotcom bubble, and many hedge funds, institutions, and investors still remember missing the opportunities to invest in the growing technology companies of the early 2000s.

With a similar pattern forming in cryptocurrencies and blockchain technology, these investors likely aren’t keen on making the same mistake twice. Will 2020 be the new 2000? Only time will tell.