The South Korean cryptocurrency exchange Bithumb has just listed two new crypto ‘toys’ to its already packed trading shop. Are they any fun to play with?

Last month, Bithumb listed three new coins (IOST, Polymath, and ROM). On the first day of the New Year, the exchange-listed yet another one (AMO Coin), and now, more than two weeks into 2019, the Seoul-based company gave South Koreans traders two new toys to play with:

If you have not heard about the two projects, you are not alone — as most other crypto enthusiasts have not either.

What Is Ether Zero (ETZ)?

BUY NOW (October 24), and finishing with many other failed attempts like the infamous SegWit2x.

It was only a matter of time before Ethereum

The moment came on Jan 19, 2018, when an unnoticeable minority forked the Ethereum

Blockchain is a digital ledger that’s used for storing data on several servers across the world in a decentralized, trustless... More blockchain and created Ether Zero.

Every ether hodler at that moment received two ETZ for every one ETH held.

Proof of work and proof of stake are both ways of achieving trustless and distributed consensus on the blockchain. Many... More (PoW) algorithm. The new blockchain is now using a Masternode

A masternode is a series of servers or validator that sustain a network. They are used to complete transactions that... More PoS system.

Besides the algorithm change, ETZ currently boasts zero transaction fees and instant confirmations thanks to their on-chain voting

Can blockchain be used for Voting? Across the globe, decisions made about many of societies issues are decided upon by... More structure and one-second block interval.

However, the zero transaction fee

In Bitcoin and most cryptocurrencies, users need to pay a nominal fee to make transactions, or in other words, send... More does not mean there is zero cost for anyone who wants to run a decentralized application (dApp) on the ETZ blockchain. To use the network’s resources, one must buy and hold ETZ in order to earn Power, the blockchain’s internal currency, similar to GAS on the Ethereum network.

Buying ETZ may be tricky, mostly due to at least two red flags found in the whitepaper.

The other major concern has to do with the core team. Only the founder has revealed his real identity, while the other four alleged team members do not have any real-world references and only use first names like Frank and Mia to introduce themselves.

What Is Aeron (ARN)?

The second coin listed by Bithumb was also born in the good old days of 2017.

Aeron however, was not involved in any fork. It was just a small bubble in the stormy, $6 billion Initial Coin Offering (ICO) ocean at the time.

The company held its ICO in September and October of 2017, during the busiest fundraising days in the crypto industry. Aeron issued 20 million ERC20

BUY NOW-based ARN and sold them at $0.50 a piece. At the end of the ICO period, the project had raised almost $5.69 million.

What was the company’s pitch to the investors? The flight industry needs an immutable and public database to store vital log data like pilots’ flight hours, student records, or information about the aircraft itself.

As a result, Aeron thought of an entire system based on the blockchain that could connect not only pilots and flight companies but also consumers interested in hiring an experienced pilot for their private jet, for example.

The project looked good on (white)paper, yet, did it really need to be carried out on a blockchain with an ICO on top of that? Like many other projects from that period — probably not.

What happened next proves this point.

The company managed to launch a consumer portal and ‘integrate’ it within the blockchain, and even developed a pilot mobile app to no avail. Since few people use it, ARN does not currently have much intrinsic value.

For the pump and dumpers though, it has seen a fair share of gains and losses during the altcoin hype in Jan 2018. Since then, the price has crashed with no return flight anytime soon, it seems.

Can Bithumb’s listing salvage the token? 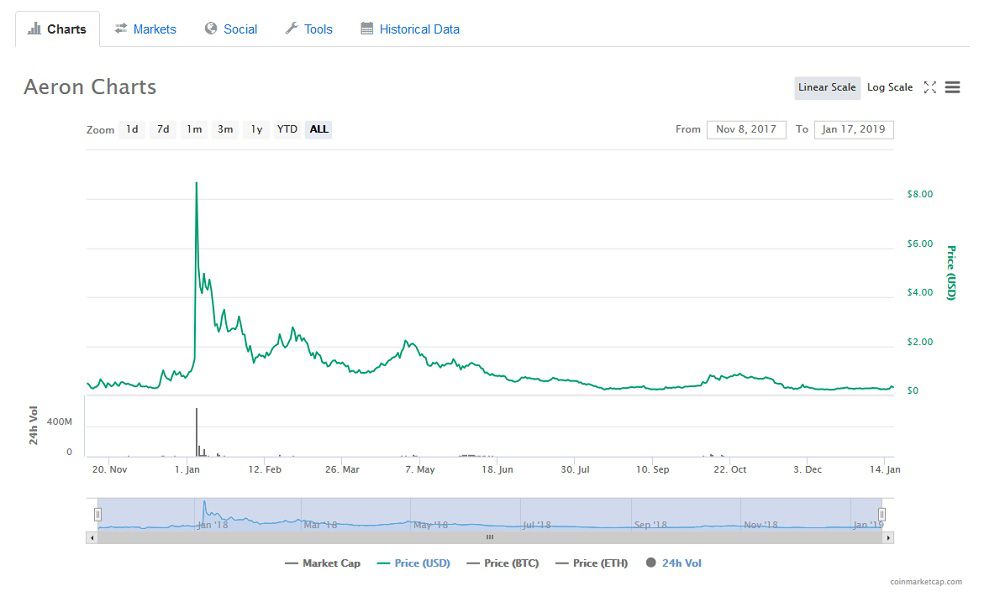 90 Percent of Cryptocurrency Firms May Be Bankrupt in Six Months: Swiss Blockchain Federation
#Companies News 1 month ago
Up Next
Bakkt Goes on a Spending Spree Before Launch
Companies News 1 year ago
Related News