Yesterday, we compared BTC’s price gains against the movements of Tesla, Inc. (TSLA) for the year 2019. In this analysis, we compare BTC against Netflix (NFLX). We analyze the trends and technical indicators of both to assess which has been the best performer for the year-to-date.

In addition, we attempt to predict likely possible future price fluctuations for both.

In our May 22 analysis of BTC and TSLA, we noted that BTC broke out above a horizontal resistance line in April as shown in the graph below: 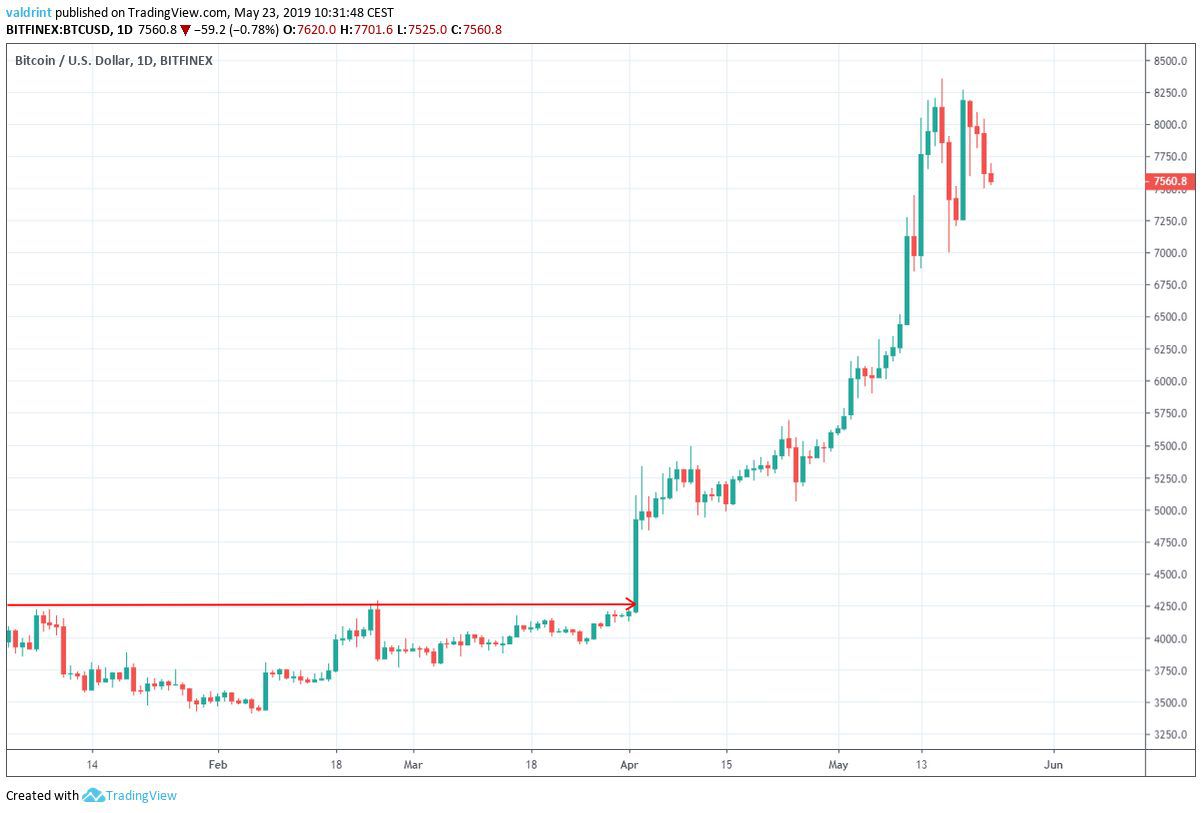 Price gains have been both rapid and gradual since the breakout. A high of $8352.3 was reached on May 16. After a drop to around $7000, prices rebounded to this level on May 20.

Since then, the price has been falling and is nearing $7500 at the time of writing.

Falling From a Double Top

If Bitcoin has reached a top, then a reversal may have already occurred. We already assessed that BTo try and predict the strength of this uptrend, a look at technical indicators is required.

The price of Bitcoin is analyzed alongside the RSI and the 100- and 200-day moving averages (MA). In addition, we have noted a possible double top pattern which has recently emerged. 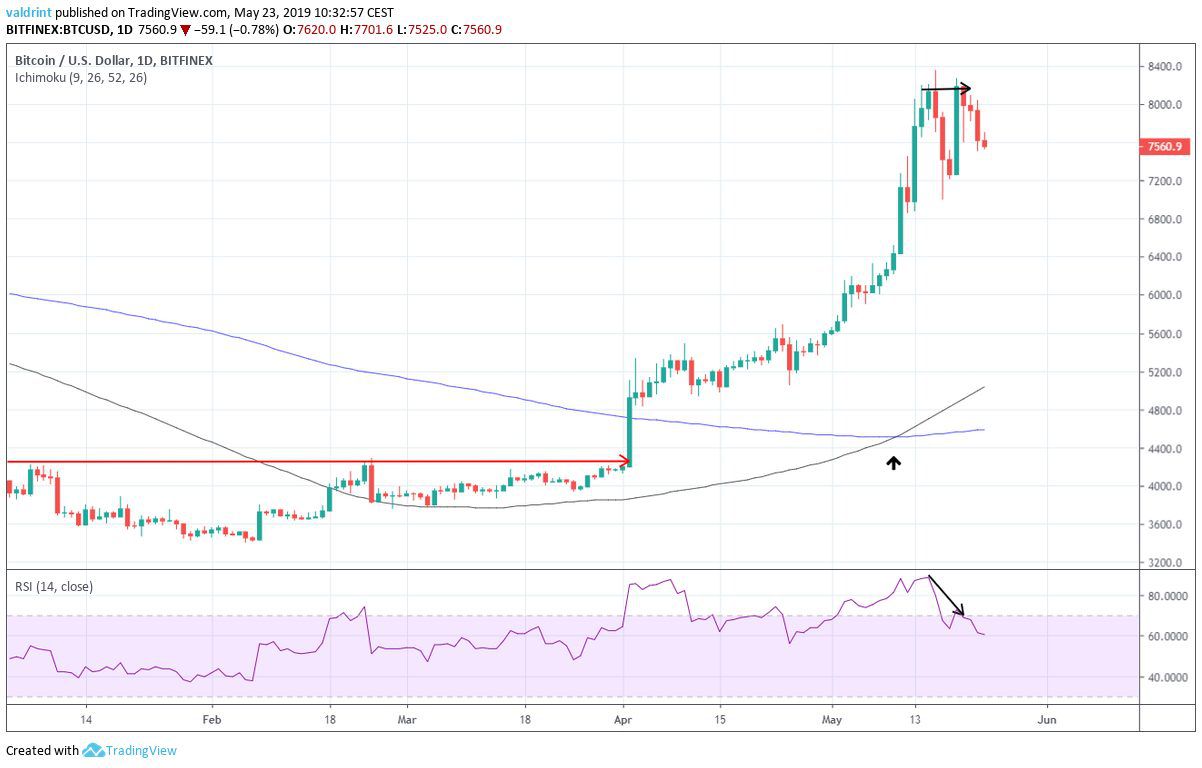 After a bullish cross on May 10, price gains accelerated. However, they reached an apparent double top pattern between May 16 and 19. During this period, bearish divergence also developed in the RSI.

As a result, the price has been dropping over the last few days. Because the RSI is continuing to fall, we believe that the bearish trend is likely to continue for at least the short term.

In our latest price analysis of BTC, we predicted that the price is likely to drop a bit more before a rebound. Subsequently, a more significant drop is liable to bring BTC to around $6000. However, prices may then move upward toward a $10,000 resistance area.

A support line is traced at $342.50 in the graph below. It emerged around Feb 12 and has been validated several times over the last few months. 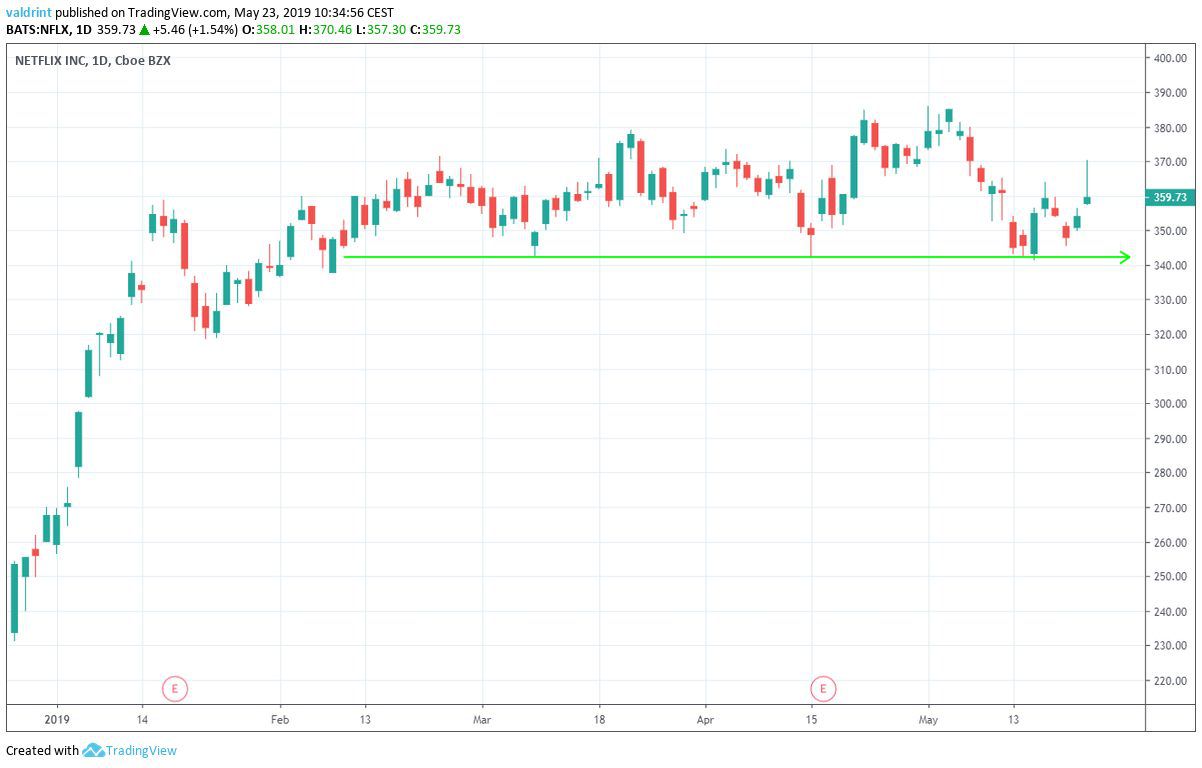 The price has touched this support line four times. Each time, an upward bounce followed. At the time of writing, the price was trading slightly above the line.

In order to determine whether the price will push upward or fall back toward the support, the price of NFLX is analyzed alongside the RSI and the 100- and 200-period MAs below: 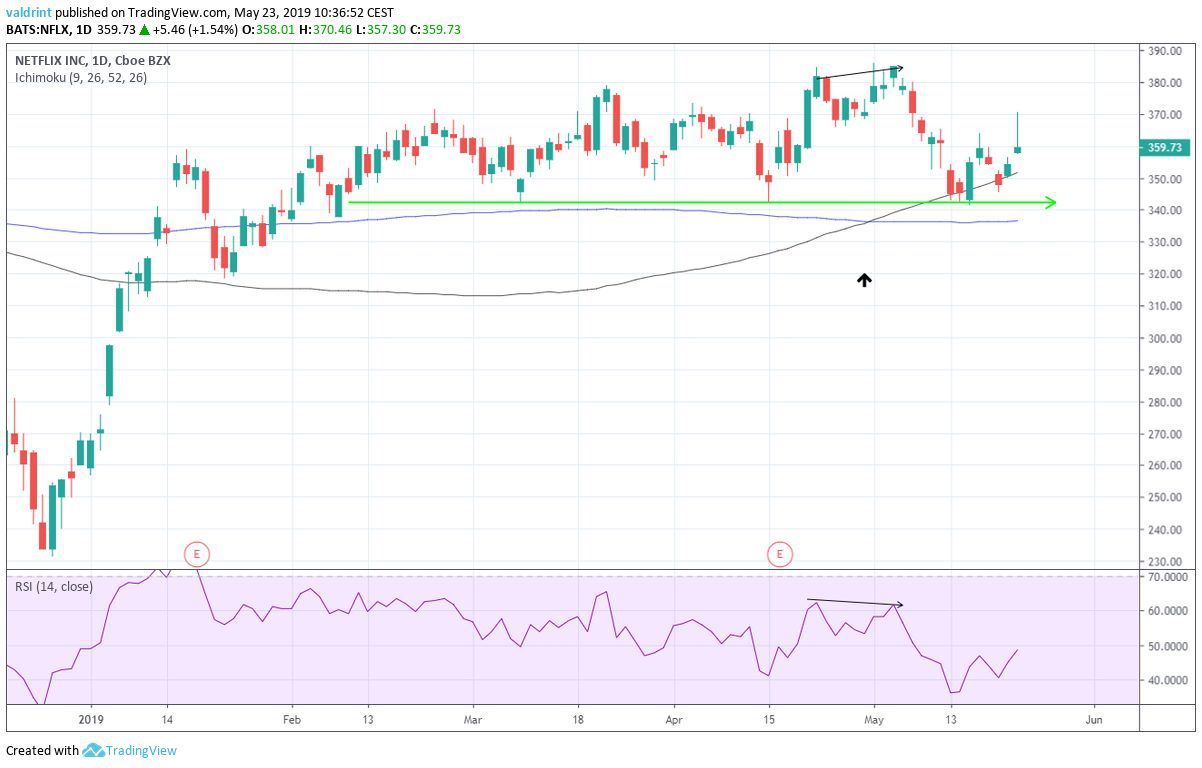 On Apr 23 and May 3, the price made similar highs above $380. However, the RSI generated successively lower values during this period. This bearish divergence preceded a drop towards the support line.

However, on Apr 30, a bullish cross between the 100-day MA and the 200-day one occurred. While the price did not immediately begin to rise, the 100-period MA has traced the price of NFLX throughout May. Nonetheless, NFLX has been trading above both moving averages over the last several days.

So it appears as if NFLX has begun an uptrend. Price increases are likely to continue. In order to determine possible levels of reversal, two resistance areas are shown in the graph below: 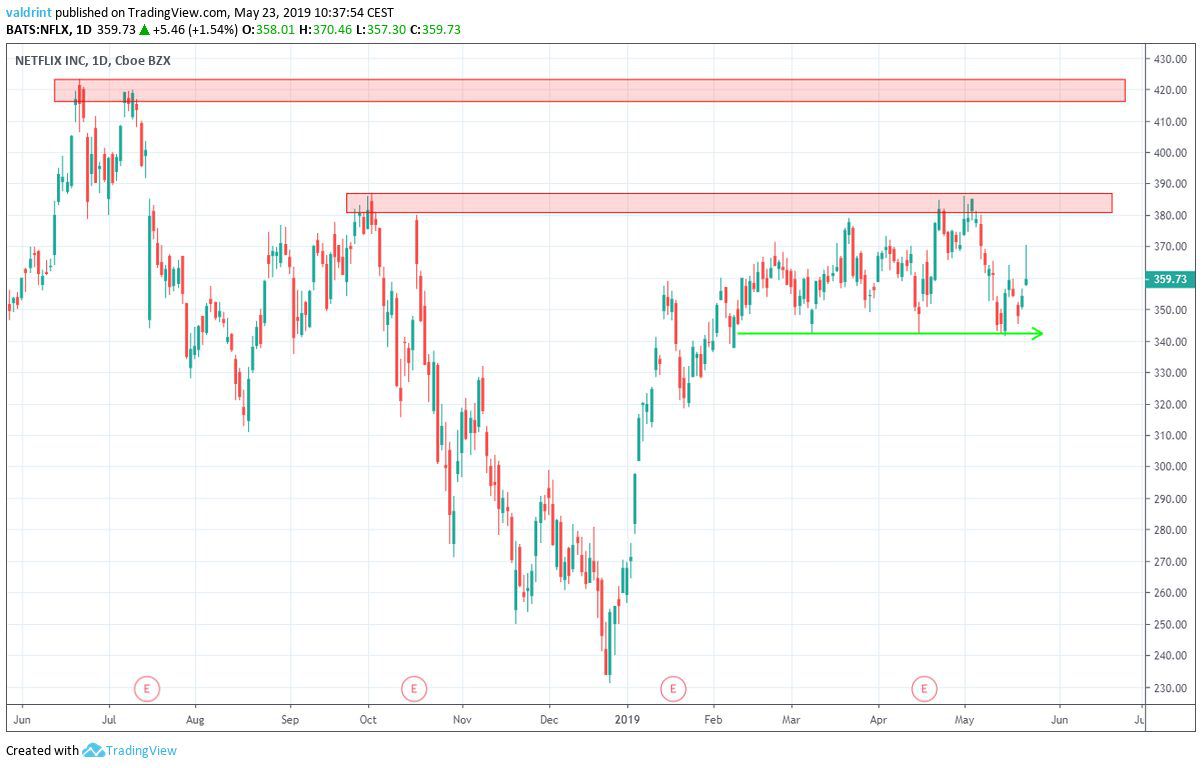 The closest support area is found slightly above $380, followed by the second one near $420. We believe that it is likely that the price will reach at least one of these areas.

Now that we have analyzed both BTC and NFLX for the year to date, it is time to compare and summarize our findings. In the graph below, the price fluctuations of Bitcoin and Netflix are shown for the period January 1 to May 23, 2019 in the graph below. Percentile gains and losses are shown on the right-hand scale. 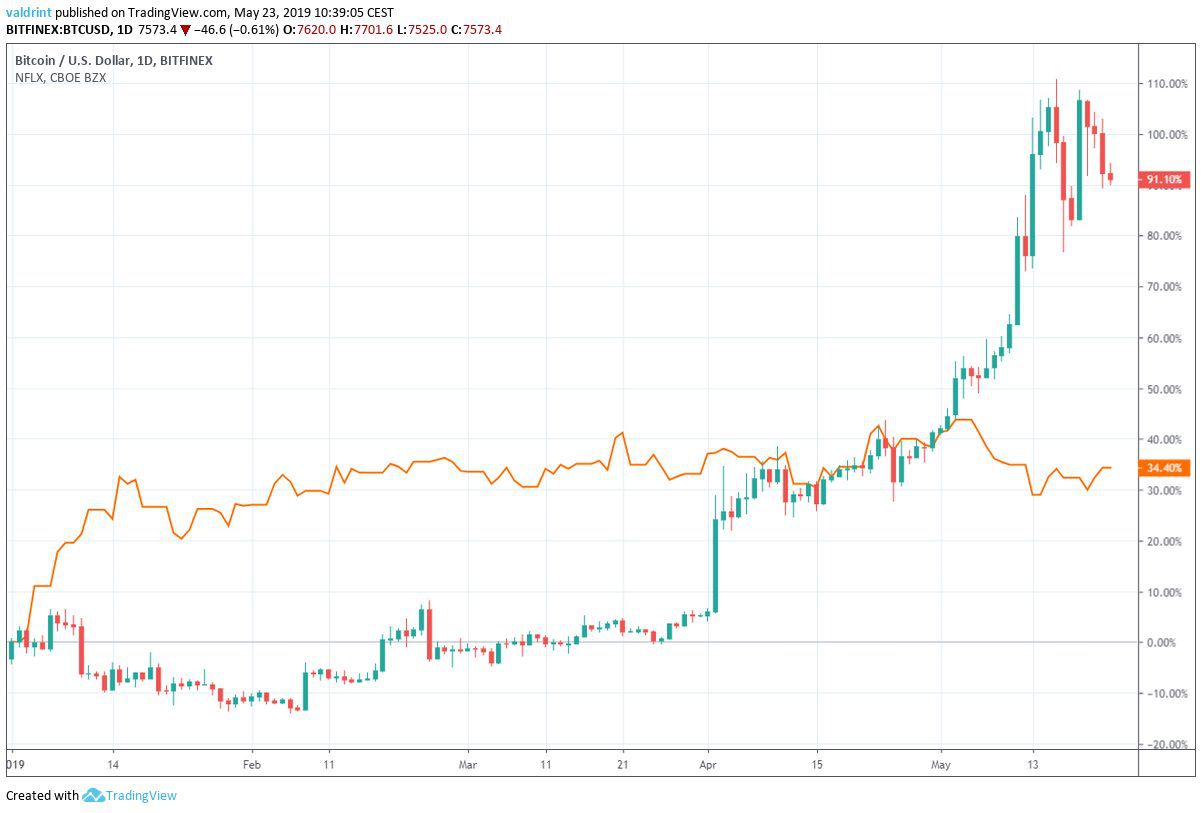 At the beginning of May, it looked like NFLX was taking off. However, a decrease brought it back below 30%.

On the contrary, the price of BTC began the year with losses. 10% of its yearly opening value was lost by February 10th. However, a period of rapid increase followed throughout February. Despite a drop toward the end of the month, BTC had returned to levels seen in early Jan.

After gradual growth in March, prices rapidly spiked throughout April and May.  At the time of writing on May 23, BTC had increased by 91.10% since the beginning of the year.

Nonetheless, our analysis of technical indicators supports price increases for Netflix and decreases for Bitcoin in the near future.

Do you think that Netflix will reach the resistance at $420 before the end of 2019? Can we expect new highs for BTC before year’s end? Let us know your thoughts in the comments below!

Almost $10 Billion in Cryptocurrency Locked in Staking Contracts
#Blockchain News 1 month ago
Up Next
TransferWise Worth $3.5 Billion, But Western Union Could Win Crypto Market
Companies News 1 year ago
Related News