By Valdrin Tahiri
1 April 2019, 14:59 GMT+0000
Updated by Valdrin Tahiri
14 June 2019, 07:16 GMT+0000
At BeInCrypto, we offer regular price analyses of LTC and other cryptocurrencies. Today, we are beginning a new series of monthly price analyses for several cryptocurrencies including Litecoin.
On March 1, 2019, Litecoin (LTC) opened at $46.62. A monthly high of $64.20 was reached on Mar 18 following an upward move initiated on Mar 5.
Litecoin ended the month with a closing price of $61.40. This measured an increase of 31.78% from Mar 1’s opening. While other cryptocurrencies also saw growth, Litecoin’s growth surpassed Bitcoin with around 8% monthly price gains, Ethereum which saw prices increase by only 3%, and Stellar lumens—another leader with gains in March of around 27.5%. Litecoin also outperformed XRP which saw a loss of around 1.875%. Below is an outlook of the daily prices of LTC/USD trading pair for the month of March: 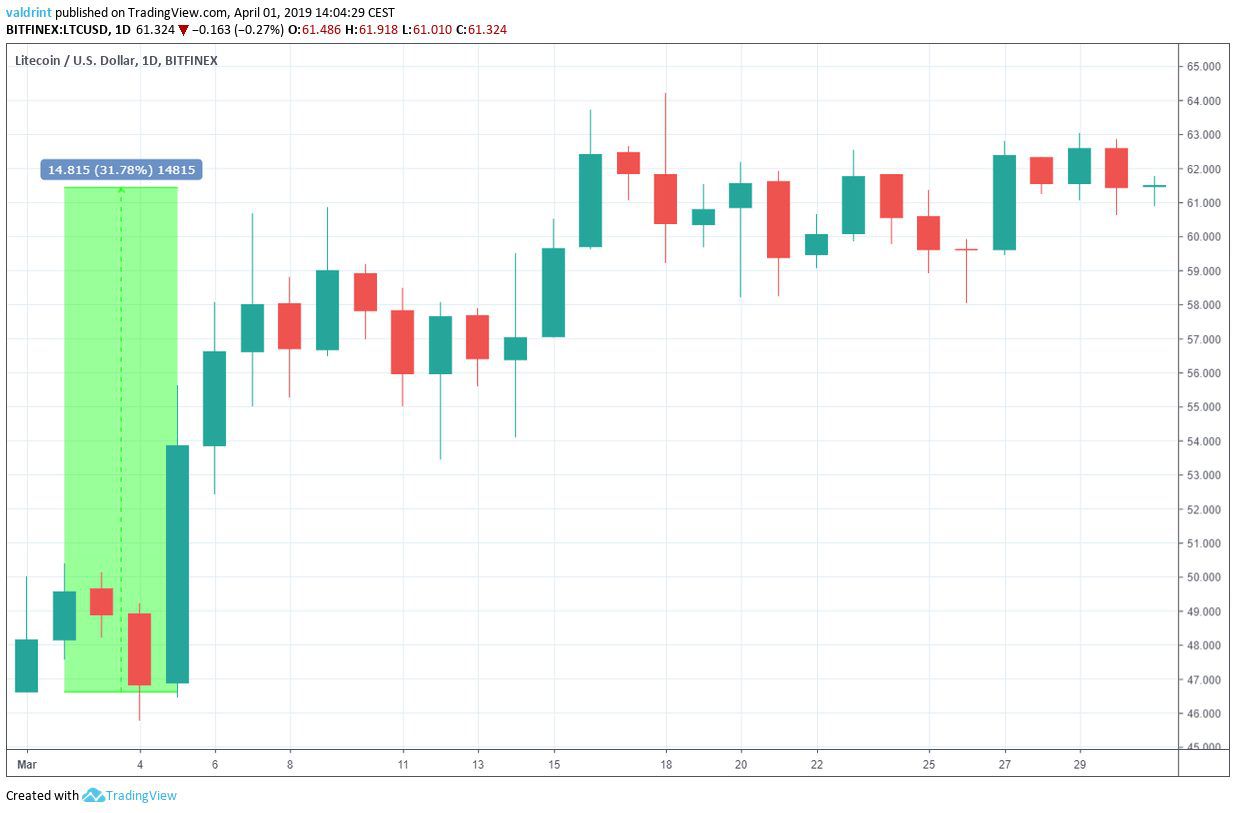 Below, we are going to take a look at the trading structure of Litecoin during March. To do this, we examine the most important movements that occurred during the month.

The price of LTC on Bitfinex is analyzed at one-day intervals from Mar 1 to Mar 31. We trace three important movements during this period: These three movements are highlighted in the graph below: 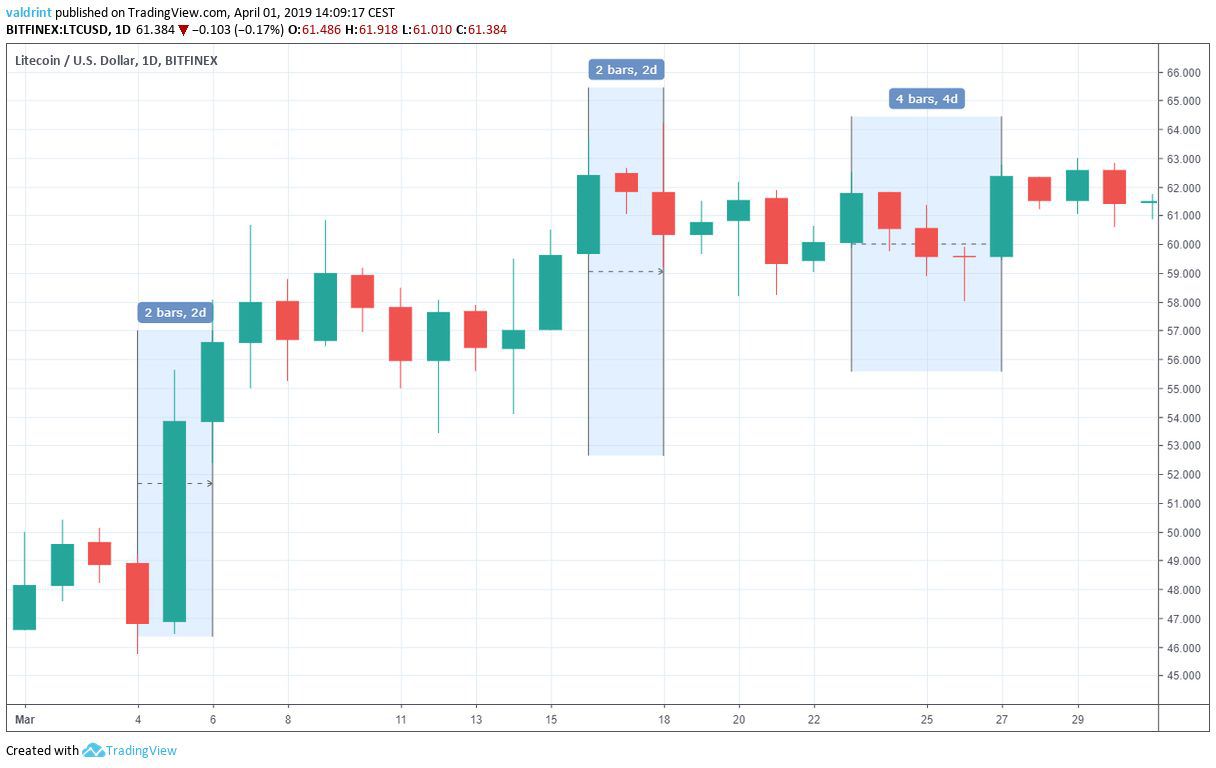 The price of LTC on Bitfinex is analyzed at one-hour intervals from Mar 3 to Mar 13 to isolate the trends for the period Mar 5-9. On Mar 5, the price reached a low of $46.40. A rapid upward move ensued later that day. It continued into the next day when a high of $58.00 was reached. On Mar 7 and 9, prices above $60 were reached. A drop from the high on Mar 9 brought Litecoin to the support line of an ascending channel: 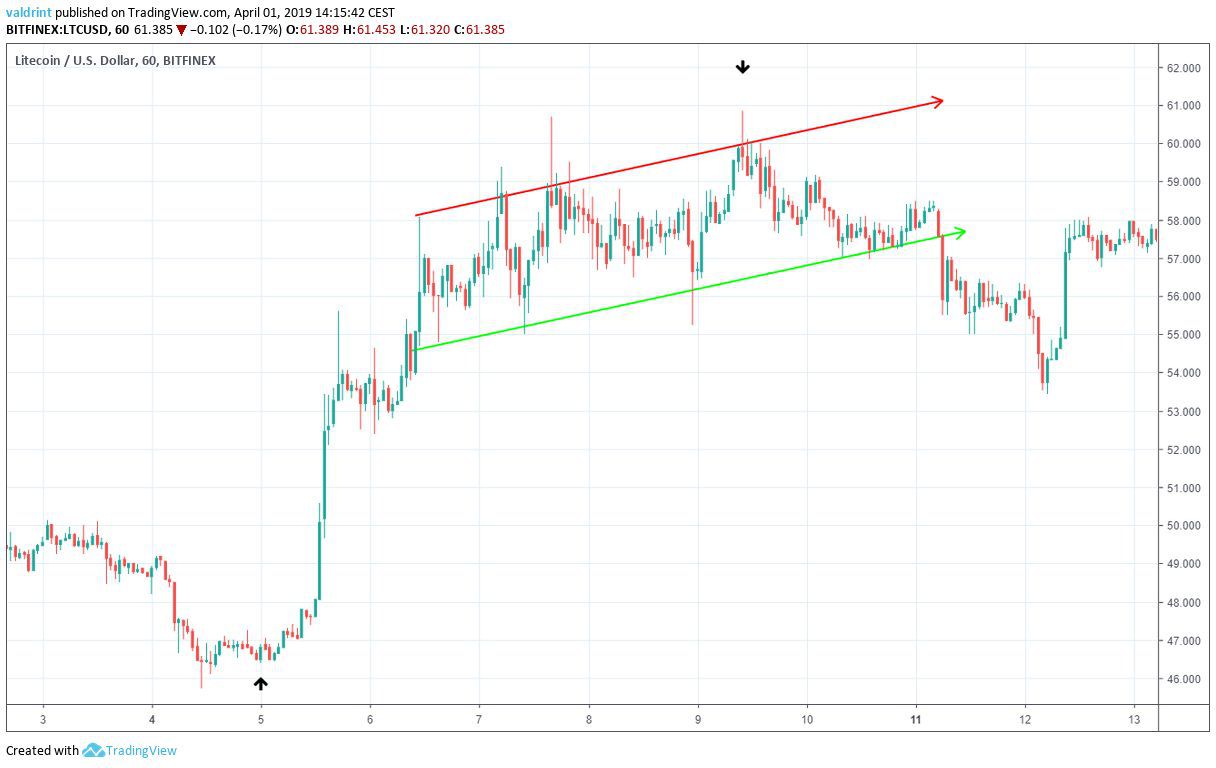 On Mar 11, Litecoin brokedown from the channel. Price dropped but stayed above $50.

The price reached a low of $53.40 on Mar 12 following the breakdown. A reversal ensued, and Litecoin price began making successively higher lows and highs. Tracing both of these generate ascending support and resistance lines. Together, they create an ascending wedge: Between Mar 16 and 18, Litecoin experienced highs above the resistance line. These, however, did not lead to a significant breakout. 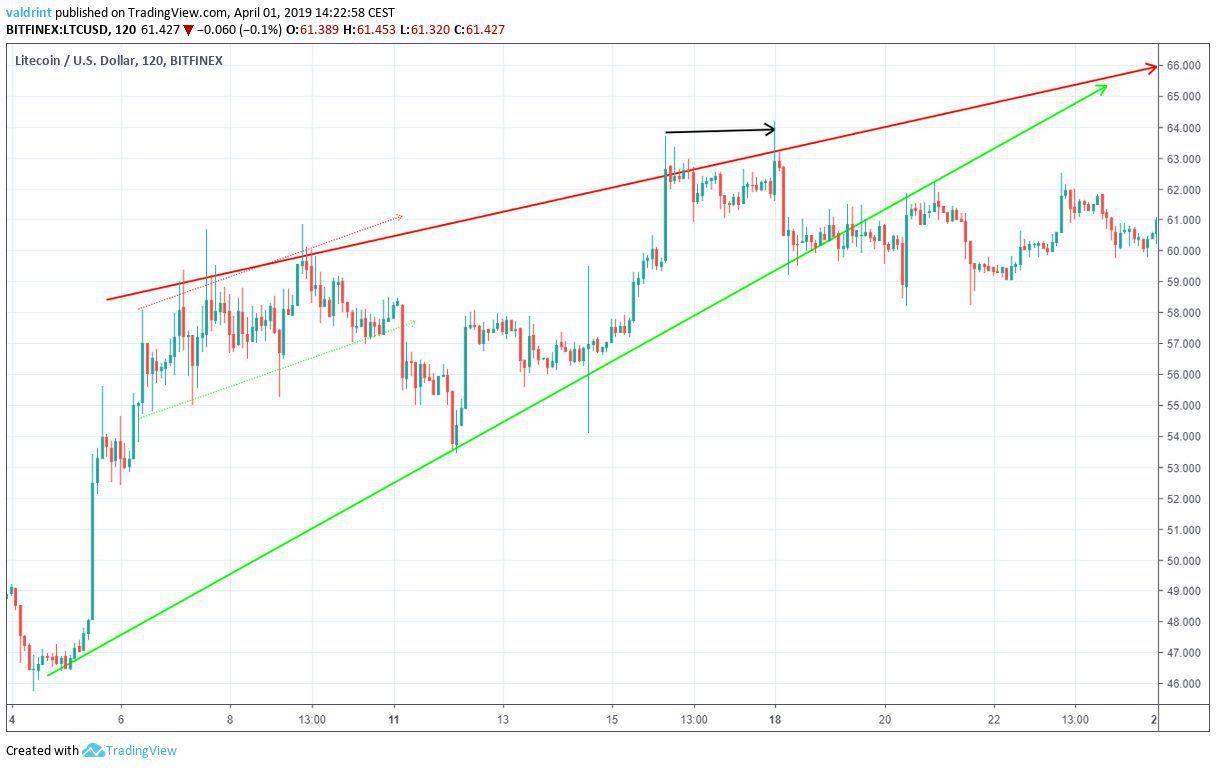 On the contrary, price returned to the channel on Mar 18. The following day, a breakdown below support occurred. We successfully predicted this movement in our Mar 18 analysis.

Since the breakdown, the price has not reached the levels of Mar 18 again. On the contrary, a new horizontal channel developed with resistance at $63 and support at $59: 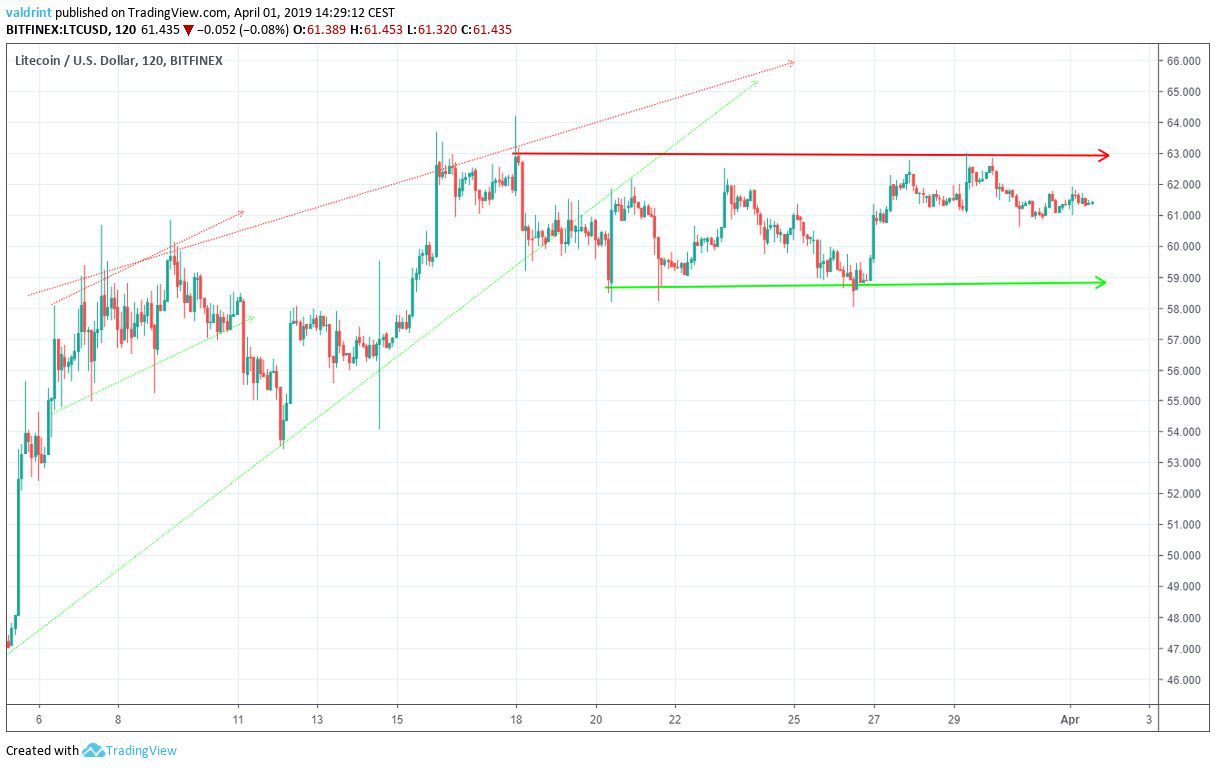 In our Mar 25 analysis, we warned that the Mar 18 high of $64.20 value could be a swing high. As March ended, this still appeared true. When April began, Litecoin was still trading within the new horizontal channel.

In the month of March, the price of LTC enjoyed significant increases. It is currently trading inside a horizontal channel. Do you think that the Mar 18 high will be broken during the month of April? Let us know your thoughts in the comments below! Disclaimer: This article is not trading advice and should not be construed as such. Always consult a trained financial professional before investing in cryptocurrencies, as the market is particularly volatile.