The Enjin Coin price ended a long period of consolidation with a breakout on December 4. This was possibly the beginning of a new market cycle.

The Enjin Coin price increased by more than 50 percent on December 4 — possibly in anticipation of the announced partnership between Enjin Coin and Microsoft in regards to Azure heroes. The increase continued until December 6, and the price has been correcting since.

In the spirit of their mission to empower #developers of all backgrounds, Microsoft's #AzureHeroes program aims to inspire devs to learn, coach, and build on @Azure and promote a healthy, inclusive community via #blockchain technology.

Twitter analyst and trader @lomahcrypto noted the recent increase by the ENJ price and outlined a possible inverse head and shoulders, which is considered a bullish pattern.

Will close most of this position if we get another retest of the highs. pic.twitter.com/wAhhH7Vl1i

However, he suggested that he will close the majority of his position, in case the price revisits its recent highs.

Will the price do so? Continue reading below if  you are interested in finding out.

The 600 satoshi support area has been historically significant for the ENJ price. After the initial upward movement of 2017, the price initiated a six-month-long correction until it reached the support area.

The Enjin Coin price bounced on this area twice on August and November 2019, before initiating a very strong upward move.

After the ensuing correction, the price again reached this area in August and October 2019. 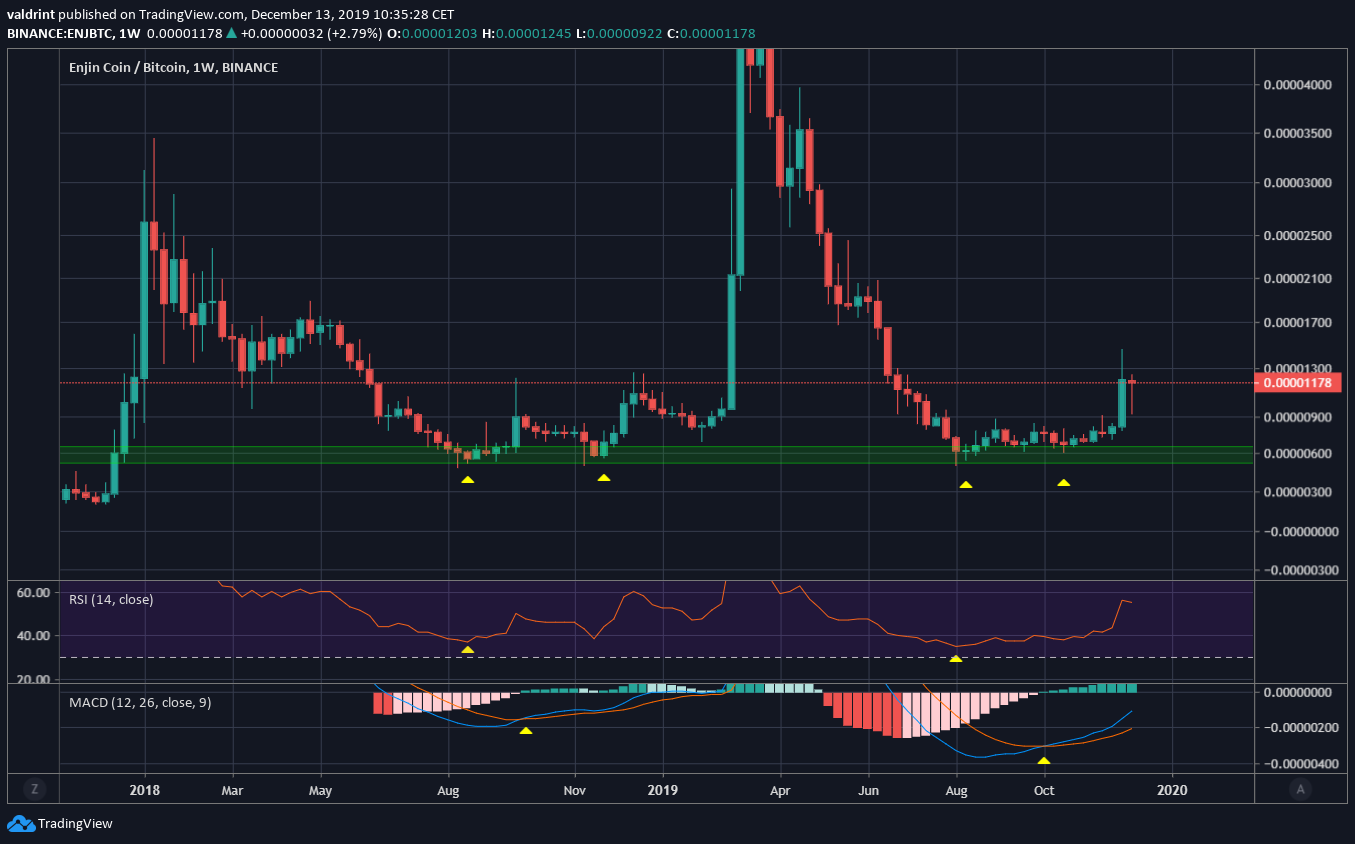 The ENJ price reached a low of 510 satoshis on August 9. It gradually increased over the next few months, before breaking out of the 800 satoshis resistance area on December 4. The breakout transpired with extremely significant volume, possibly indicating that it was the beginning of a new market cycle.

The rally ended once the price reached 1466 satoshis, coinciding with the 0.618 Fib level of the previous upward move. Afterward, the price retraced and almost retested the previous resistance area. 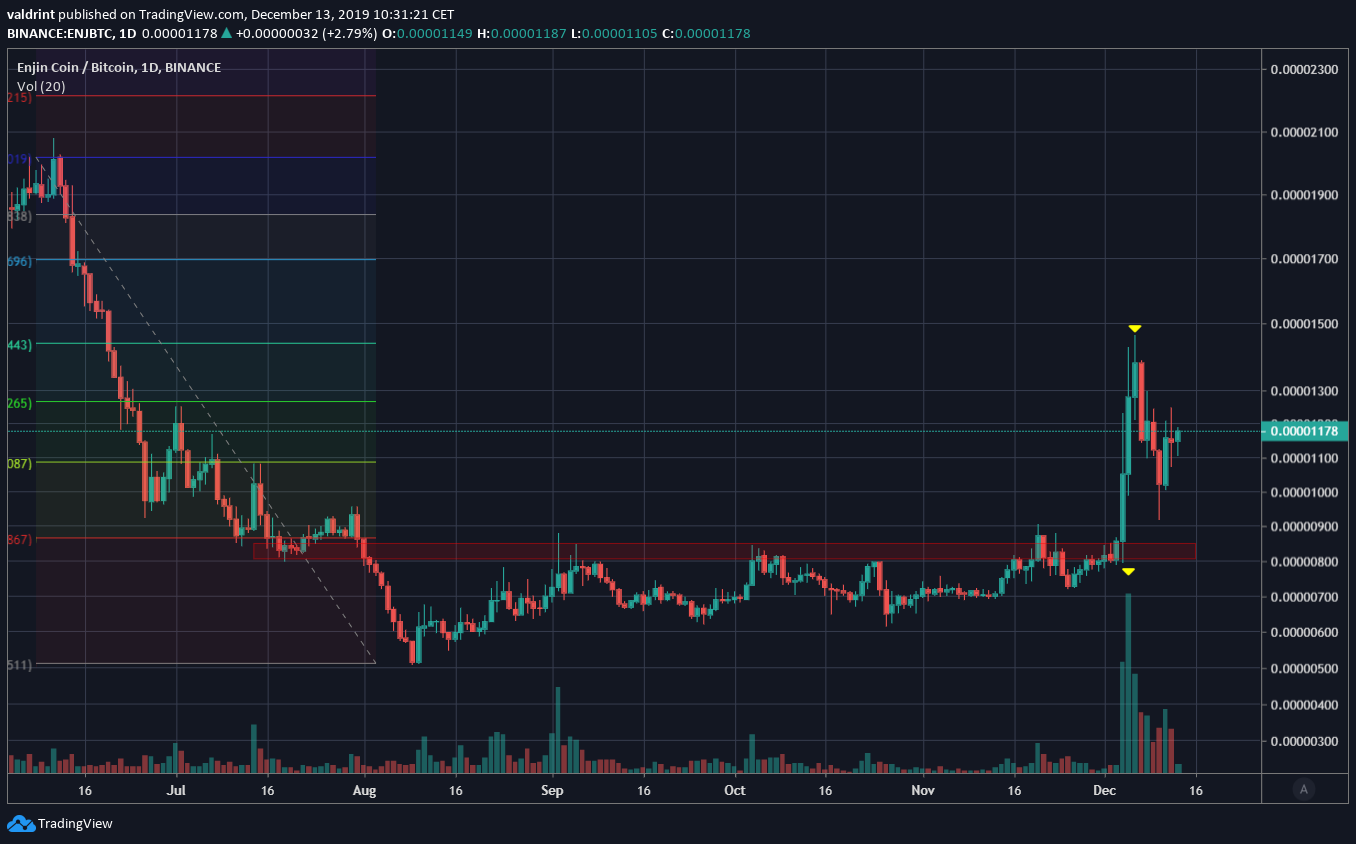 Since reaching the aforementioned high, the ENJ price is, possibly, in the process of completing the right shoulder of an inverse head and shoulders (H&S) pattern.

The head was created at the 0.786 Fib level, making it a suitable place to end the retracement. The possible increase is supported by positive news — since the ENJ/USD pair went live today on the Binance exchange.

We're live! Trading for ENJ/USD is now available on @BinanceAmerica.

A breakout the full height of the pattern would take the price near the highs of 1500 satoshis, making it a likely resistance area and increasing the possibility that the price makes a double top.

This gives validity to the claim in the tweet in which “the majority of the positions will be closed if we revisit the highs.” 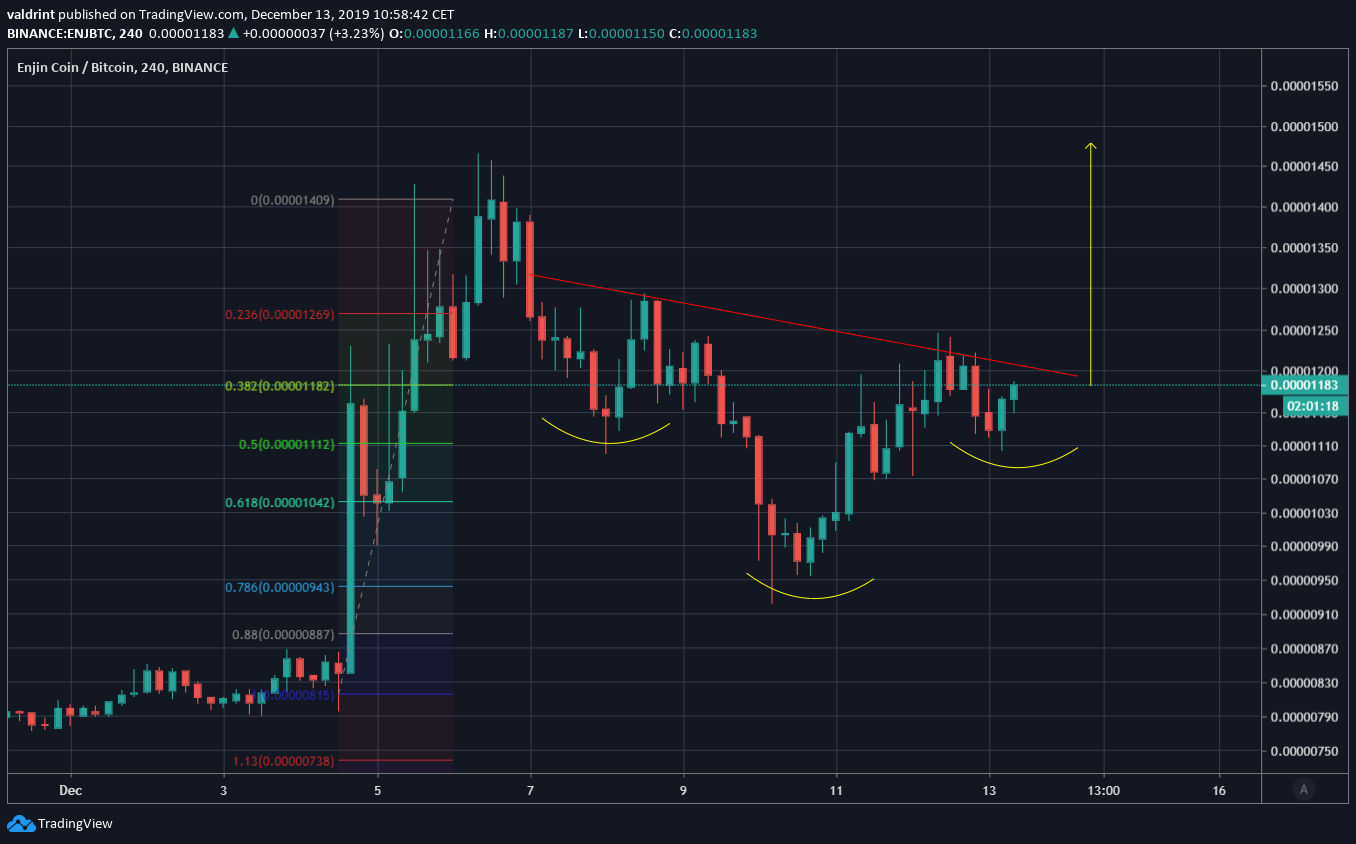 To conclude, the ENJ price recently initiated a very strong upward move which could have been the beginning of a new market cycle. It is currently completing an inverse H&S pattern which could take it to 1500 satoshis.