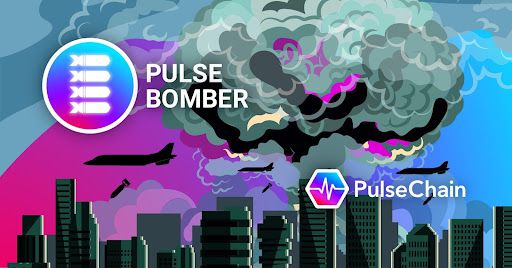 Pulse Bomber – a new token and crypto mining application that has just launched on the Binance Smart Chain, is establishing itself as a prominent force in the crypto space.

The project is making big plans to become a first-mover to the highly anticipated PulseChain network, once the main net is launched in the coming months.

The Pulse Bomber project has been released with a day one use case through the high ROI mining platform they have created, while also growing a substantial community following on the BSC.

The goal is to gain a foothold in the market early, using the BSC as a stepping stone to grow their community, holders, and market cap before the migration takes place.

When the PulseChain network launches in the coming months, they will already have the support to hit the ground running. As history shows, first movers to any long-awaited new chain tend to see the most success – this is the position they aim to take.

Holders of the native $PULSEBOMBER token will be rewarded with a 1:1 airdrop of the PulseChain equivalent, once the migration takes place.

The Pulse Bomber Miner is a crypto mining platform that was launched in conjunction with the $PULSEBOMBER token, providing high ROI at an average of 10% per day with up to 3,650% APR.

The platform is easy to use, with a simple user interface and is quickly establishing itself as a substantial passive income source for the holders of their token.

A key attribute to the miner is compounding rewards. Users are able to compound their earned rewards to hire additional miners and increase their earning potential.

Daily engagement is encouraged, as users who wish to see the highest efficiency and ROI, need to return once every 24-hours to either claim their rewards or hire additional miners.

Users who fail to return to the platform within the 24-hour window will see the efficiency of their existing miners decrease and a subsequent drop in the ROI.

Tokenomics for BuyBacks and Burning

The tokenomics model that the development team has created is an evolution of previously implemented models seen in other projects but has a significant point of difference that sets them apart.

Their burn feature makes up a significant amount of the $PULSEBOMBER transaction taxes, with 10% of buys and 15% of sells allocated to the feature.

But unlike standard burn mechanics seen in other tokenomic models, they have created a Dual Buyback and Burn Protocol.

The tokens that are gained through buying and selling are used to purchase additional tokens from the open market, which are then burned and removed from the supply.

Why Pulse Bomber see PulseChain as the way forward for crypto

It is no secret that there is a high amount of anticipation for the upcoming PulseChain network, set to release in the coming months.

The popularity of the new network is due to the problems it aims to solve, namely with the dominant Ethereum network. Slow transaction times, high gas fees, and environmental impacts are the main concerns with the number two chain.

PulseChain aims to not only create an alternative but also help Ethereum by sharing the load. PulseChain aims to reduce the fees, increase throughput times and remove the environmental concerns associated with mining by becoming truly proof-of-stake.

Pulse Bomber sees these changes as the way forward for the crypto space and plans to bridge to PulseChain once the option becomes available.

They have the objective of creating a large community of holders before the release, gaining the head start required to hit the ground running when the main net launches.

Although this is not confirmed, the release is expected to take place in early 2022. Further details for their planned migration are outlined in the project’s whitepaper.

The project is only just beginning its roadmap to PulseChain, but the foundation for sustainable growth has already been created and proven.

They have a tokenomics model not only focused on buybacks but also dedicated to marketing allocation.

They have a team with years of experience in the crypto industry and also have expert assistance from Coinpresso – a leading marketing agency in the blockchain space.

The project has a solid use case with their crypto miner and an experienced team that has large but achievable goals.

Their main vision was decided since the beginning – to launch a bridge with the upcoming PulseChain when it becomes available, as well as release their crypto staking platform, NFT Marketplace, and gaming metaverse along the way.

The head start to PulseChain is well on its way and inevitably, they are prepared to breach the gates as a force to be reckoned with once the PulseChain main net launches in the near future.

True Global Ventures Leads Investment Round of $3M Into Enjinstarter

MetaWeek to Shape Future Trends for Metaverses and Blockchain

Lossless Vault Protection Stops a Hack and Saves $55,000 for gotEM

Yield App Launches V2, With More Than a New Look