Bitcoin Will Break Out Again in November, Suggests Cryptocurrency Trader

Fractals are repetitive patterns in which the price of an asset within a period of time acts similarly as it did in a previous period, which is not necessarily of the same length. While these movements are not always identical, they always share numerous similarities, most often the ratios between different proportions of the movements.

These recurring patterns have very often been used to make predictions about the price in the future date, assuming that the price will act similarly.

Long-time trader and analyst @cryptopicasso noted a possible repetitive pattern in the price movement ofBitcoin in March and October 2019.

Looking a lot like chop before launch $BTC pic.twitter.com/6Y3yGZXNAQ

Besides the direction and magnitude of price movement, these patterns possibly have the same relationship between the 100- and 200-period moving averages (MA).

However, the current move is developing at a potentially faster rate, since the chart uses the hourly time-frame as opposed to the four-hour in the March movement.

Let’s look at both these movements in more detail and determine how similar they actually are.

The price created an ascending support line, which was touched three times before the price broke down. 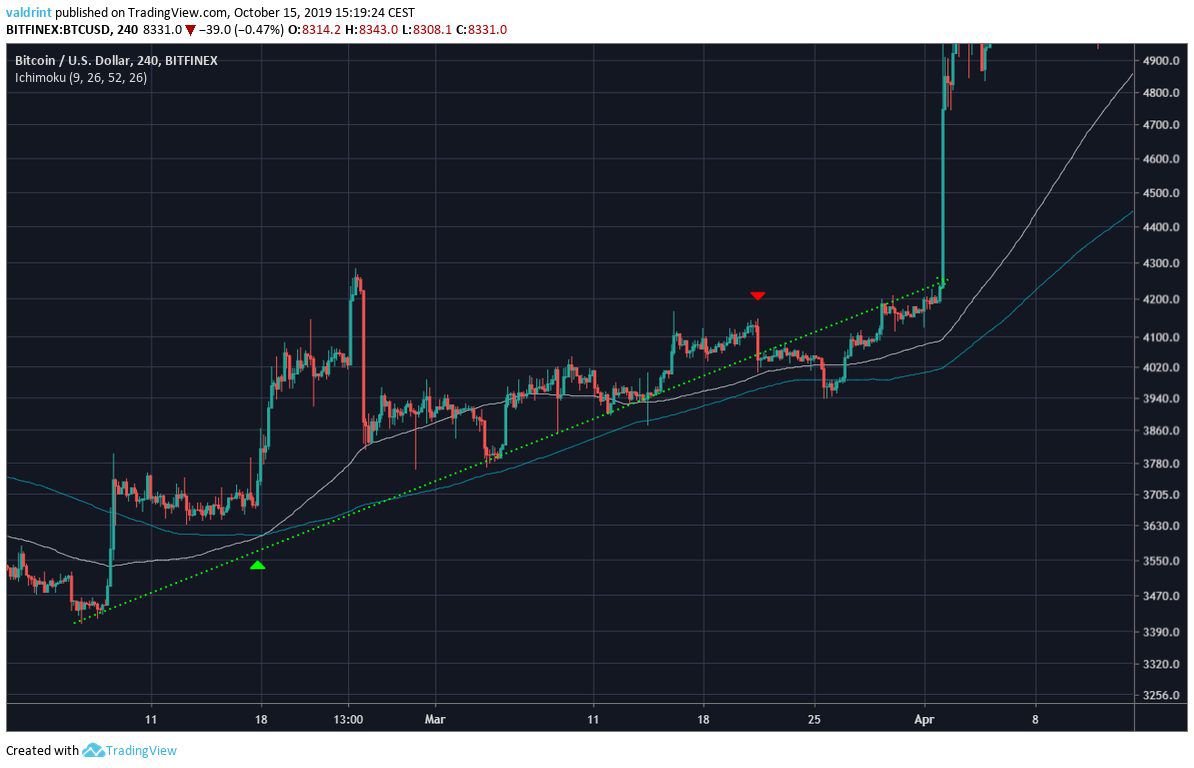 Afterward, the price increased to validate the previous support as resistance, a very common movement after a breakdown.

But, instead of decreasing, it began a rapid increase above $5000. This movement continued until June 24, when the price reached a high of $13,764, marking an increase of roughly 400%

The price began an upward move after reaching a low of $7798 on October 7.

This was followed by a bullish cross between the 100- and 200-period MAs on October 10.

The price created an ascending support line and validated it three times.

If the price acts in the same manner as in March, it will break down from the support line, validate it, and continue its upward movement. 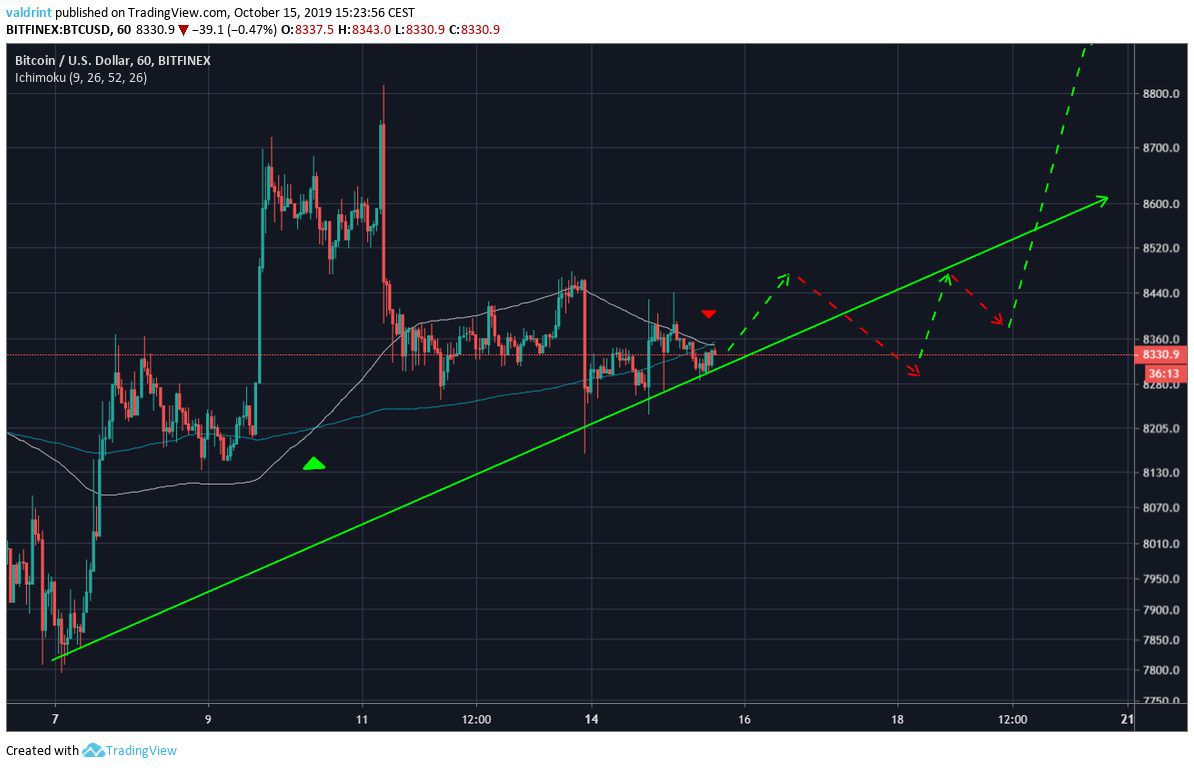 However, dissimilarities have already begun to show.

Unlike the previous period, a bearish cross transpired between the MAs, as mentioned above, on October 15.

While we could see an initial pump above $9000 similar to that at the beginning of April, we do not believe the price will continue its increase for a long period, similar to previously when it eventually reached a high of $13,764 on June 26.

The reason for doing so is the current trading pattern and wave count. 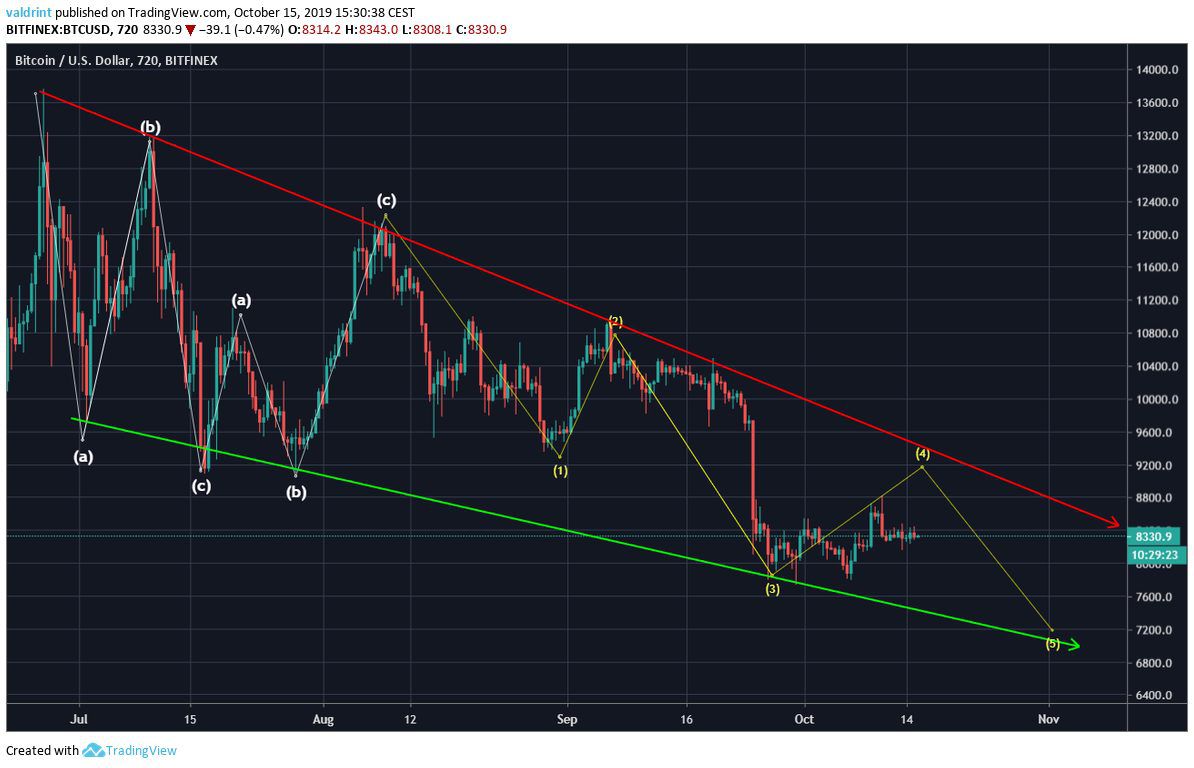 While we could see an extended wave four up to the resistance line at $9200, we do not think a breakout is likely before the price finishes one more downward wave.

Do you think the fractal will prove correct, or will it be invalidated? Let us know in the comments below.