Bitcoin SV to $1,200: Craig Wright’s Prophecy Almost out of Time

This past summer, Craig Wright, a chief proponent of the Bitcoin Satoshi’s Vision blockchain, made a rare end-of-year price call for his favorite cryptoasset. With just six weeks remaining, the realization of Wright’s $1,200 BSV prediction for 2019 is looking increasingly doubtful.

Investor and entrepreneur Alistair Milne pointed out the ticking clock against Wright’s call in a tweet featuring a screenshot of Wright’s original prediction, dated June 3, 2019.

Craig Wright promising $BSV will go to $1200 as a result of his court cases (posted June 3rd 2019) … pic.twitter.com/ihrjOBRcii

Wright posted the tweet as he was in the midst of a legal battle against the estate of his former partner, the late computer scientist, David Kleiman. The court ‘cases’ referred to above would apparently finally settle the question of who Satoshi Nakamoto

We don’t know much about the founder (or founders) of Bitcoin — Satoshi Nakamoto — as he pretty much disappeared... More (SN), the creator of Bitcoin, really is (or was).

Wright, having long argued that he himself created Bitcoin in 2008, seemed to suggest above that when he inevitably proved his identity in court, the price of Bitcoin SV would shoot up from a sudden influx of ‘wealth’ moving into the market. In a reply tweet to his price prediction, Wright went as far as to give it a ‘97.8 percent probability.’

Of course, the Kleiman Vs. Wright battle is still ongoing and Wright is still to prove himself the author of the Bitcoin Whitepaper. The two parties had agreed to settle in September. On October 30, Wright broke the agreement claiming that he could no longer afford to pay the legal fees.

With legal proceedings set to go on into next year now, it doesn’t look like Wright’s bold price prediction will come to fruition. Already past the middle of November, there are just over six weeks remaining for the price of Bitcoin SV price to increase by more than $1,000  — equivalent to a level of around five times greater than its all-time high. 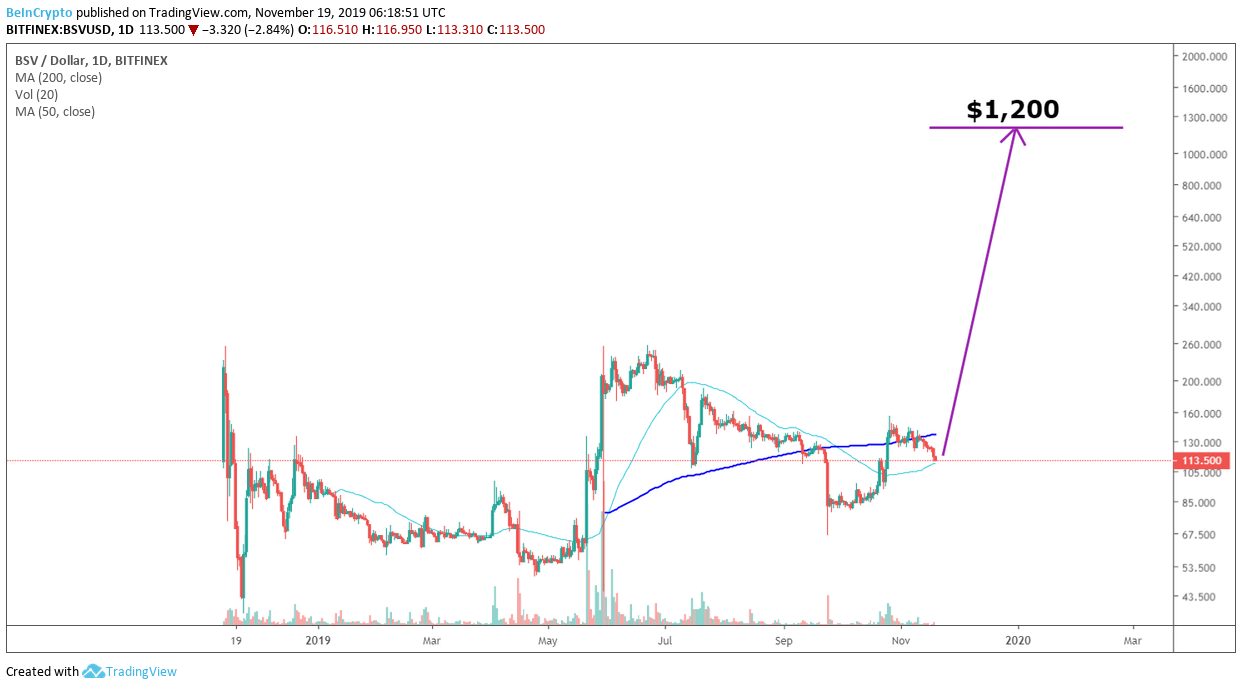 Wright has not been having much luck with his soothsaying of late. BeInCrypto recently reported on the Satoshi Nakamoto-claimant promising that he would reveal a coin-killing flaw in the coding of SegWit, an update to both Bitcoin and Litecoin aimed at increasing the number of transactions per second. The day Wright said he would make his grand announcement has, of course, come and gone. Wright has yet to disclose or exploit this supposedly fatal flaw.