BUY NOW dominance rate has created a bullish short-term pattern, a breakout from which would take it near its 2019 high.

The dominance rate began a rapid decrease on Jan 7, since the recent BTC price increase was not reciprocated in altcoins.

Cryptocurrency trader Benjamin Blunts outlined this pattern in the Bitcoin dominance chart, stating that the price has created an inverse head and shoulders pattern, a breakout from which would complete the fifth and final wave towards 80%. In addition, he stated that 2020 will be ‘Bitcoin’s year.’

dominance looks to be printing a higher low/ IHS in an already monster uptrend.

this is not good for your shitcoin bags, 2020 is gonna be Bitcoins year pic.twitter.com/3Nn4xoujwx

In addition, it is very close to the 73% dominance rate, which is the 0.618 fib level of the prior decrease and a significant support area.

The 80% target given in the tweet seems a conservative number, however, as the next resistance area is found at 83%, a previous support level, and the 0.786 fib level. 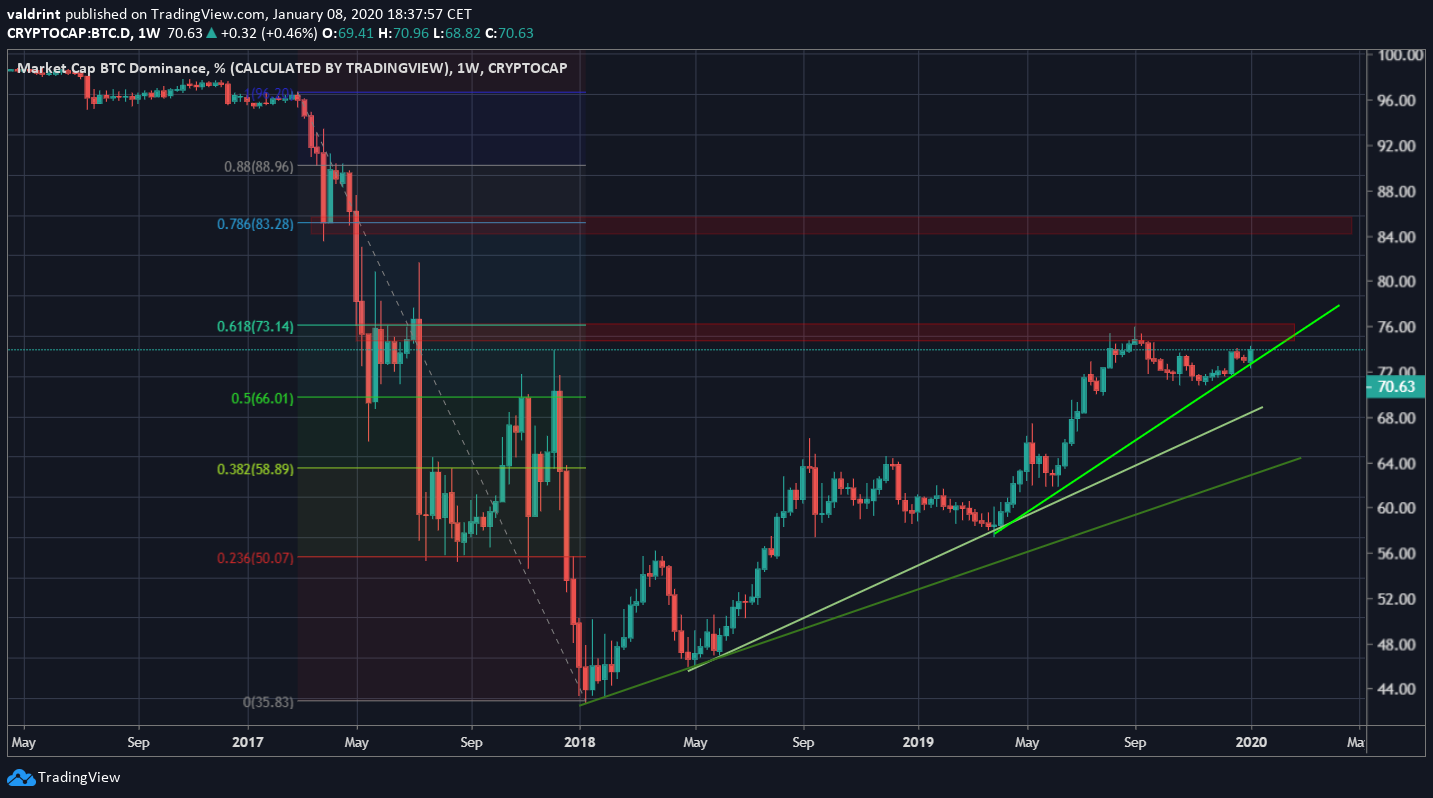 The inverse head and shoulders pattern has been developing since Sept 16. The creation of the right shoulder coincides with the strong bounce at the at the ascending support line.

A breakout that travels the entire height of the pattern would take the rate at nearly 75%. However, there is a bearish divergence developing in the daily RSI. Combining this with the strong resistance area all the way to 73%, it is unlikely that a breakout will be strong enough to move above this resistance area. Rather, it will probably make a double-top relative to the price on Sept 5. 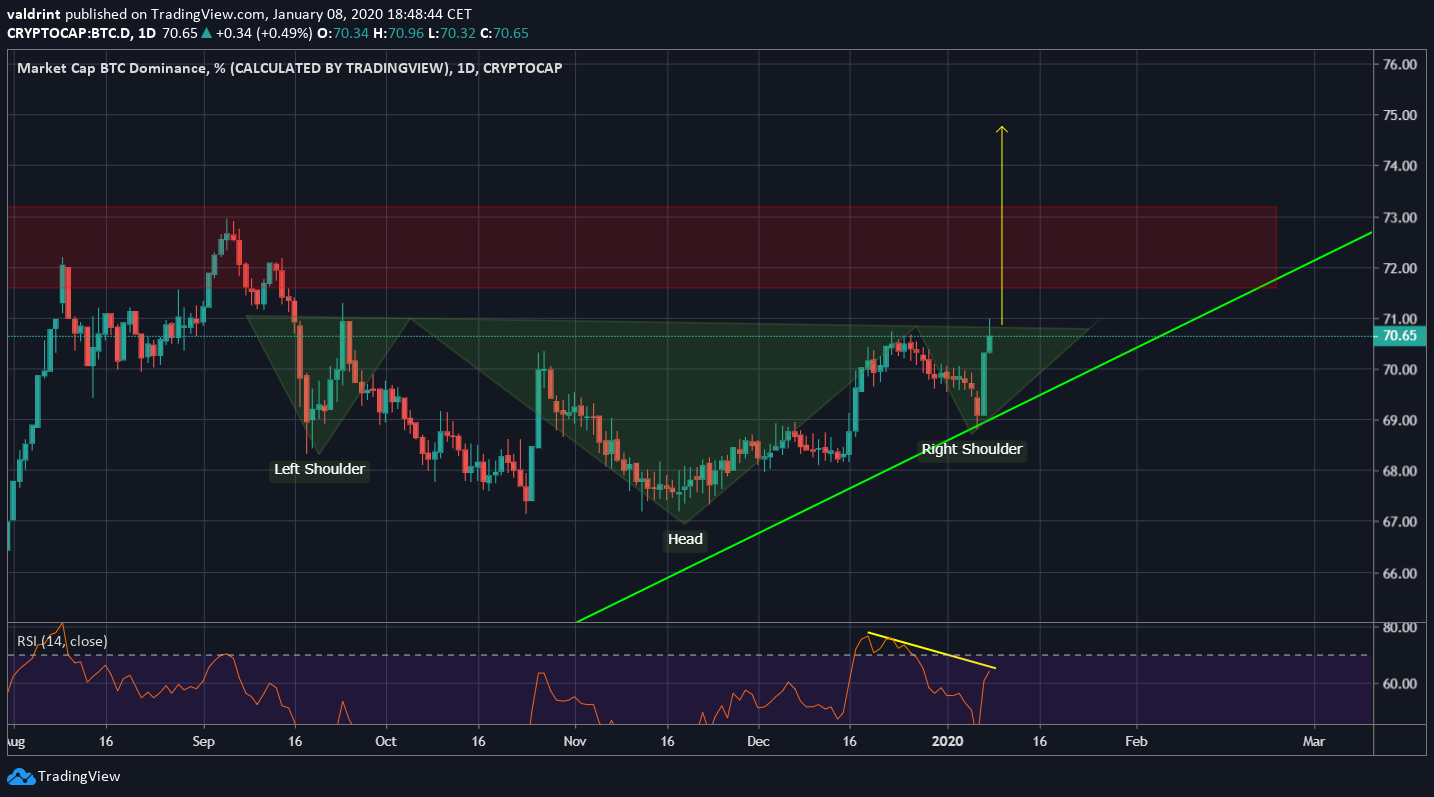 There is a separate pattern that transpired between September and December of 2018 that could be used in order to predict a breakout from the current movement.

The price created a double-top at 60% combined with a bearish divergence in the weekly RSI. What followed was a five-month-long period of loss that took the rate to 52% and validated the second ascending support line.

In the previous section, we discussed that it is probable for the price to create a double top at 73%. This would be a nearly identical movement to that of September/December 2018, since the weekly RSI is also generating bearish divergence.

If the price follows the same pattern, it will gradually decrease towards 68% where it will validate the second ascending support line. 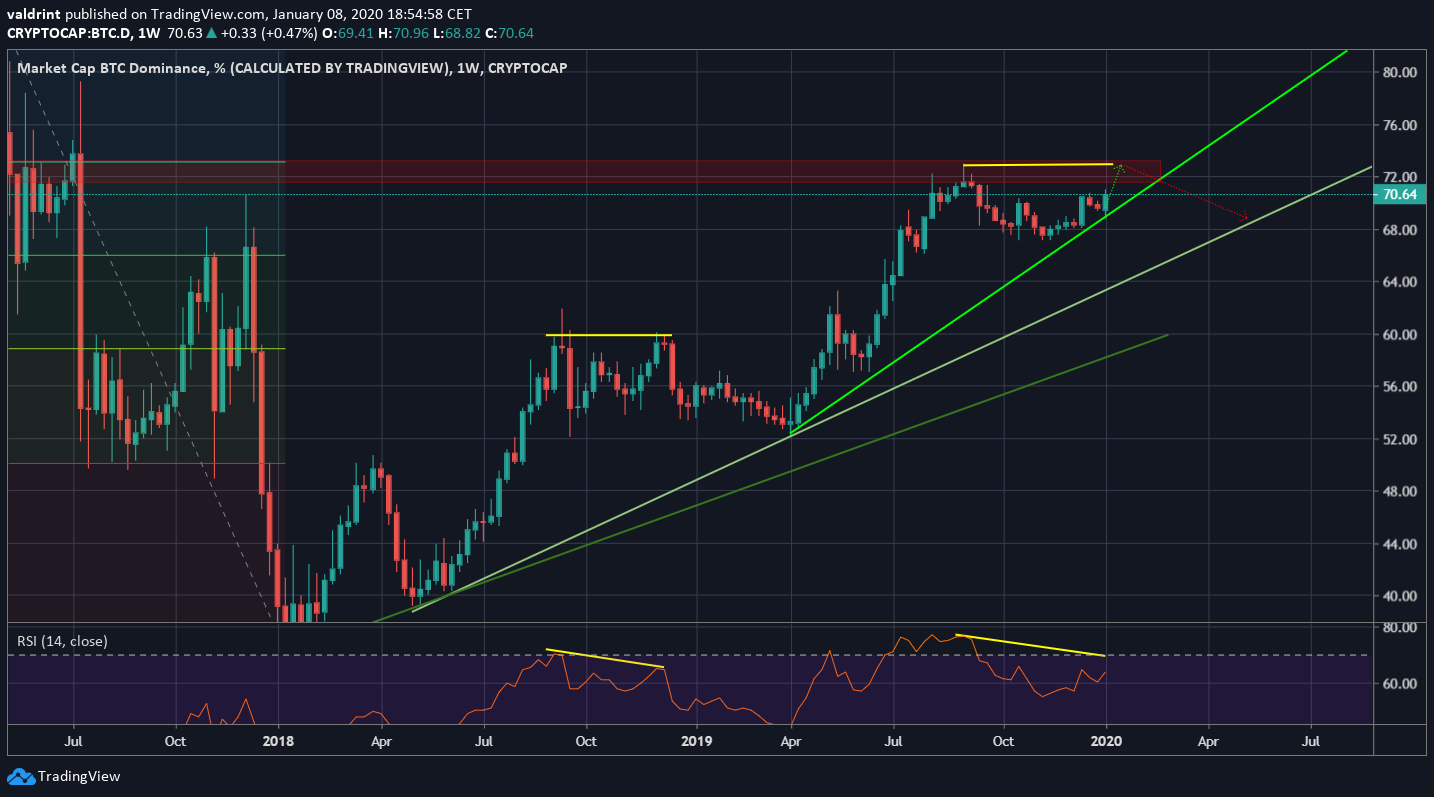 To conclude, the Bitcoin dominance rate has created a short-term bullish pattern, out of which it will most likely break out. However, it will be difficult to move above 73% and should initiate a gradual downward trend once it gets there.

90 Percent of Cryptocurrency Firms May Be Bankrupt in Six Months: Swiss Blockchain Federation
#Companies News 4 weeks ago
Up Next
U.S. Has 66% of All Bitcoin ATMs, Asia Far Behind
Bitcoin News 5 months ago
Related News

News 1 day ago
No Result
View All Result