ZEC Struggling To Break Out Above Resistance (Price Analysis for ZEC: March 14)

A small dip has since followed, but prices are still much higher than before the Mar 12 spike began. Here is a look at the prices of ZEC between Mar 5 and Mar 14: 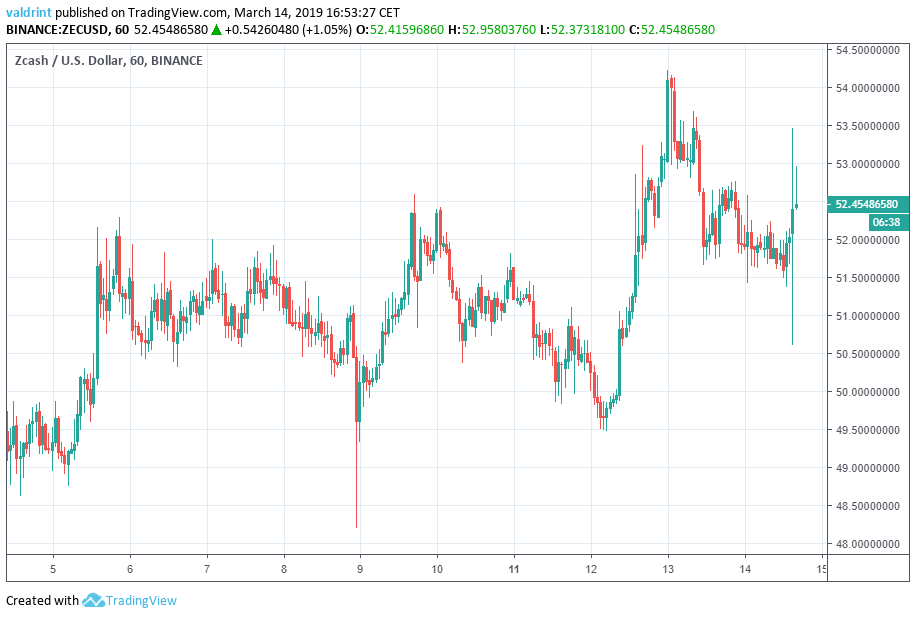 The price of ZEC on Binance is analyzed at 30-minute intervals from Mar 5 to Mar 14.

The price made a low of $48.75 on Mar 5. It immediately initiated an upward move before retracing. After every market cycle, the lows have been higher than the preceding ones. Tracing these lows gives us an ascending support line. 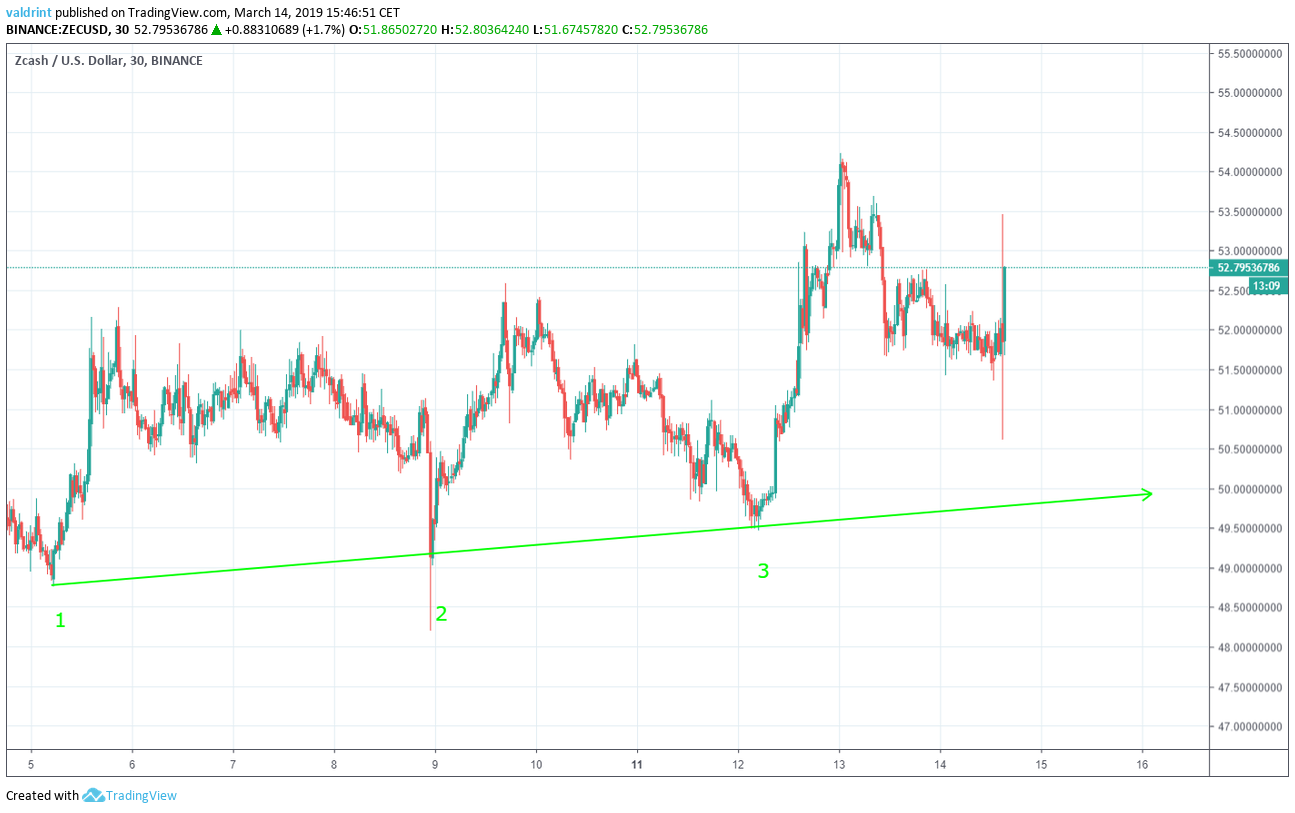 The support line can act as a floor to price, preventing further downward movement. It theoretically traces the lower limits of price over a given period of time.

Initially, the price increased at the same rate as predicted by the support line—before accelerating on Mar 12.

Wick breakdowns below the support line can be considered insignificant if they are not succeeded by continuous price decreases. This was the case with the wick low of $48.20 on Mar 8 since the price immediately rebounded to above the support line.

Price increases at the rate predicted by the line is predicted. Rises and dips along this upward trend should be expected as well based on past movements.

The price of ZEC on Binance is analyzed at one-hour intervals from Feb 25 to Mar 14 in order to better visualize the creation of the resistance line.

The price made a high of $54.9 on Feb 25. While it has made several downward moves since it has revisited the same level three more times. Tracing these highs gives us a horizontal resistance line. 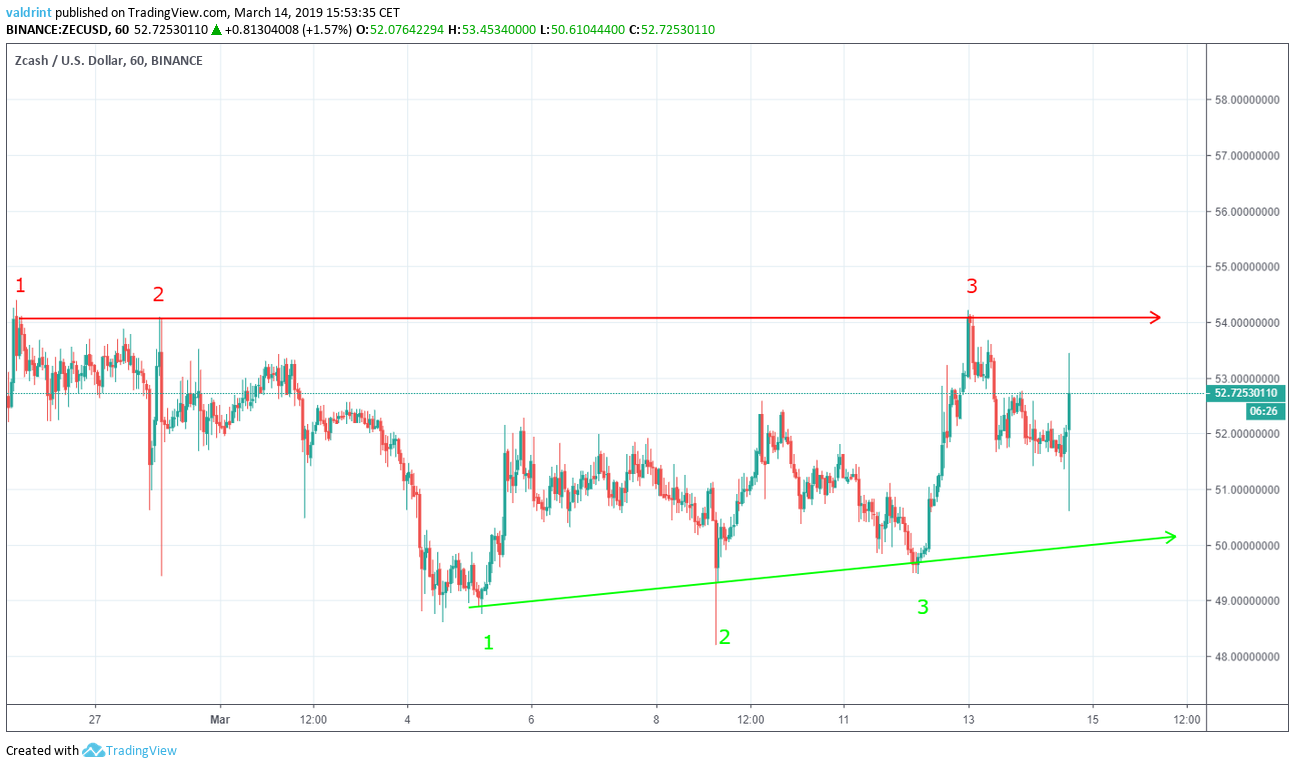 Similar to the support line, the resistance line can act as a ceiling to price, preventing further upward movement.

The resistance and support lines combine to create an ascending triangle. This is a bullish pattern and suggests forthcoming prices increases as predicted by the support line.

Based on this pattern, it is likely that the price of ZEC continues increasing at the rate projected by the support line while remaining within the confines of the ascending triangle. At a point of convergence between the support and resistance, ZEC is projected to break out of the resistance or breakdown below support. If price continues moving along the current upward trend, a breakout is more likely.

The moving average convergence divergence (MACD) is a trend indicator that shows the relationship between moving averages (long and short-term) and the price. It is used to measure the strength of a move. 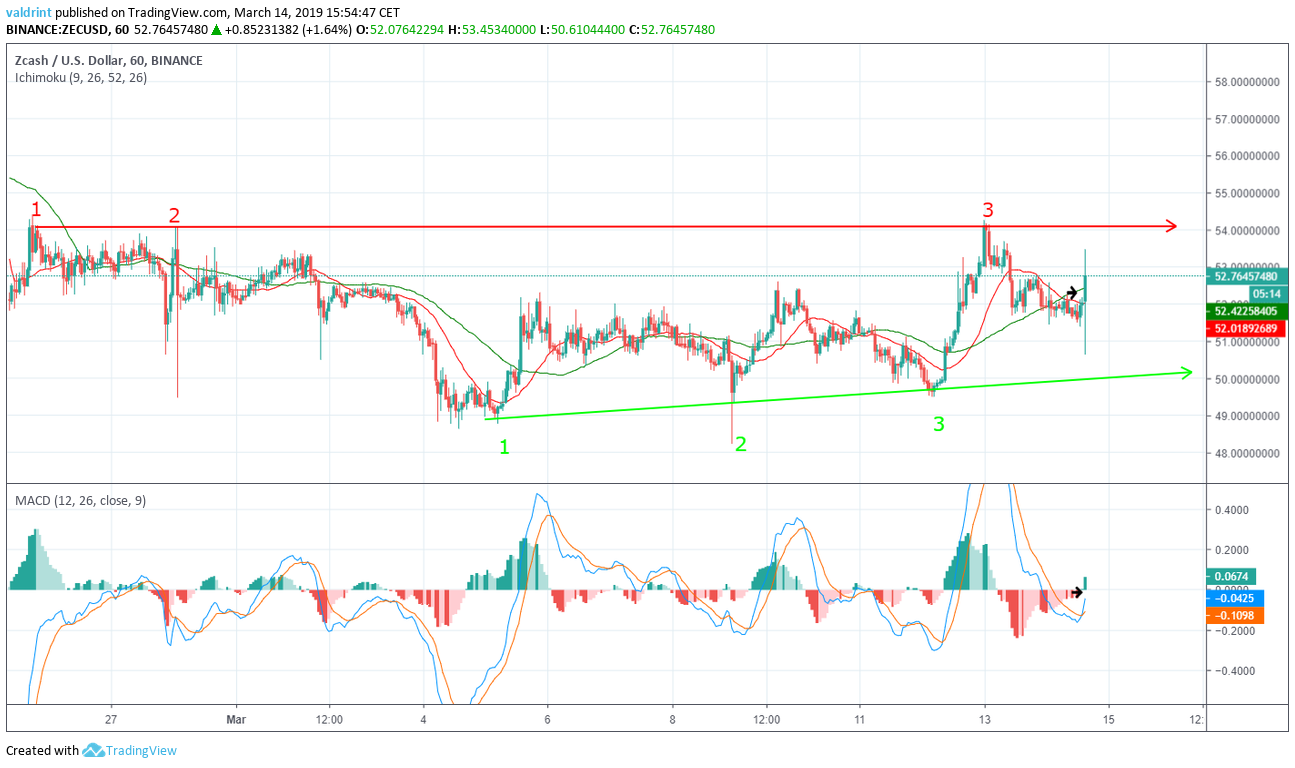 On Mar 14, the price initiated a rapid upward movement. This brought it above the 21 and 50-period moving averages.

During the same interval, the MACD line crossed above 0. This would have triggered a buy signal, indicating that the current trend may be ending and that a more rapid price increase may soon begin.

According to these indicators, it is likely that a new upward trend has started and the price will reach the horizontal resistance line soon.

The price of  ZEC on Binance is analyzed at six-hour intervals from Feb 2 to Mar 9 in order to better visualize possible reversal areas. 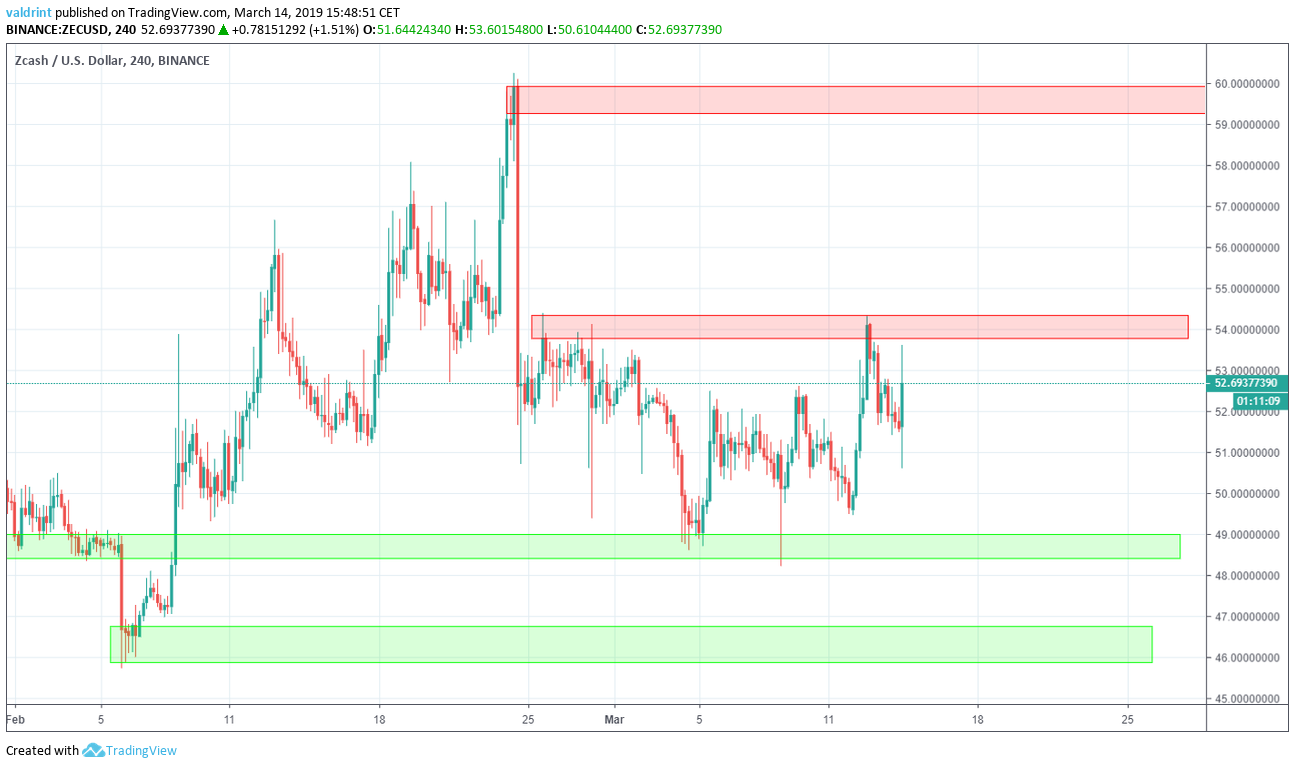 The first resistance area is found near $54. The second one can be found near $60. If the price breaks out, these two will provide likely reversal areas. Based on our analysis, it is likely that the price reaches at least one of these areas.

The first support area is found near $48 while the second one is found near $45. If the price were to break down, these would provide likely reversal areas. Based on our analysis, it is unlikely that the price reaches these areas.

Based on this analysis, the price will likely continue trading inside of the ascending triangle on an upward trend. At a certain period in the near future, it will reach support. It is possible that at this point, a breakout will occur. This is especially true if a more rapid price increases lead price to break out of the resistance. However, we believe that the price will retrace from the support before a breakout.

When do you think the price of ZEC will break out of the triangle? Let us know in the comments below.

Can NEO's Highs Get Any Higher? (Price Analysis for NEO: March 14)