Tezos (XTZ) is not yet listed on most major exchanges. Furthermore, the USD/XTZ pair is not available on Tradingview. For this reason, we used the BTC/XTZ pair during this price analysis.

Will the price of XTZ keep going up? Or is this just another cryptocurrency fad that will quickly be forgotten?

According to today’s analysis, we predict that the price of XTZ is likely to make a top in the near future and before beginning a significant reversal. 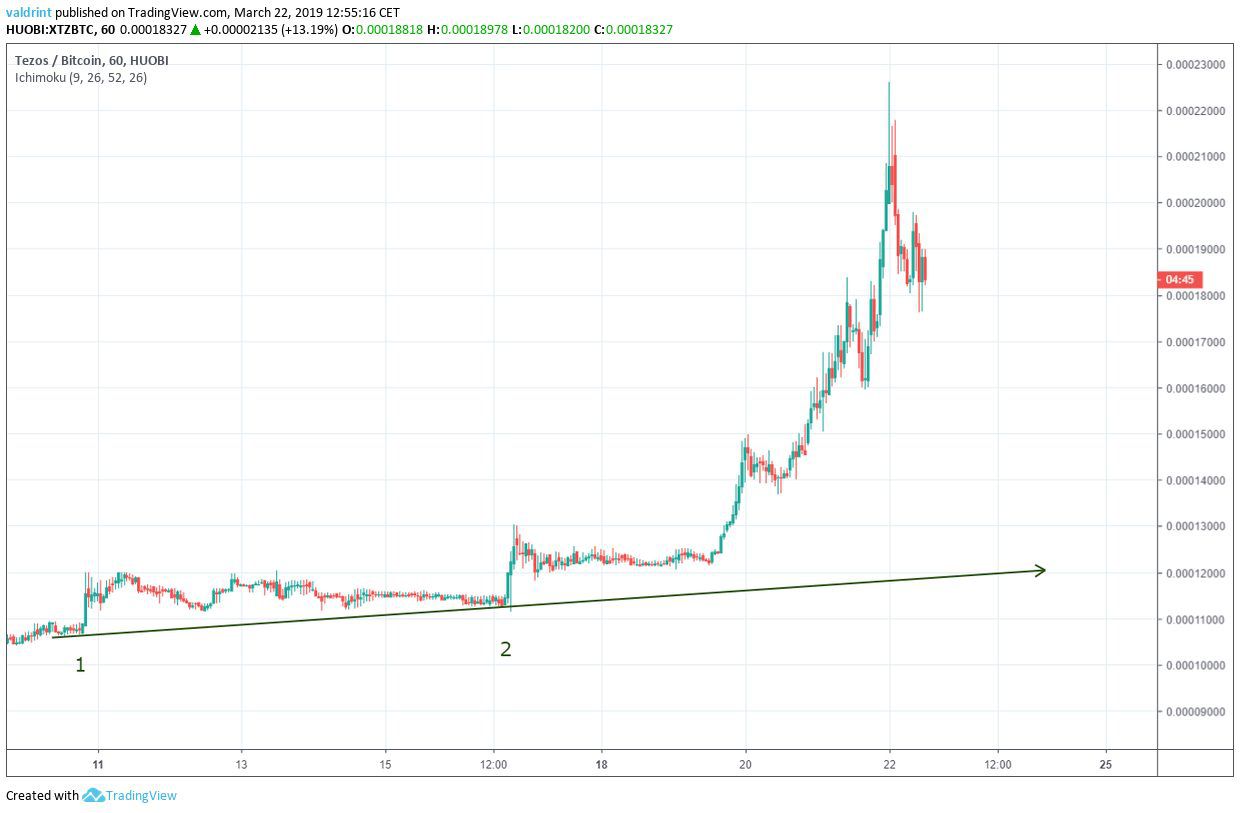 The support line can act as a floor to price, preventing further downward movement. It theoretically traces the lower limits of the price while also measuring the rate of increase.

Price initially increased at the same rate as predicted by the line, before accelerating on Mar 16. Since that time, the support has ceased to be an accurate indicator of future price fluctuations. 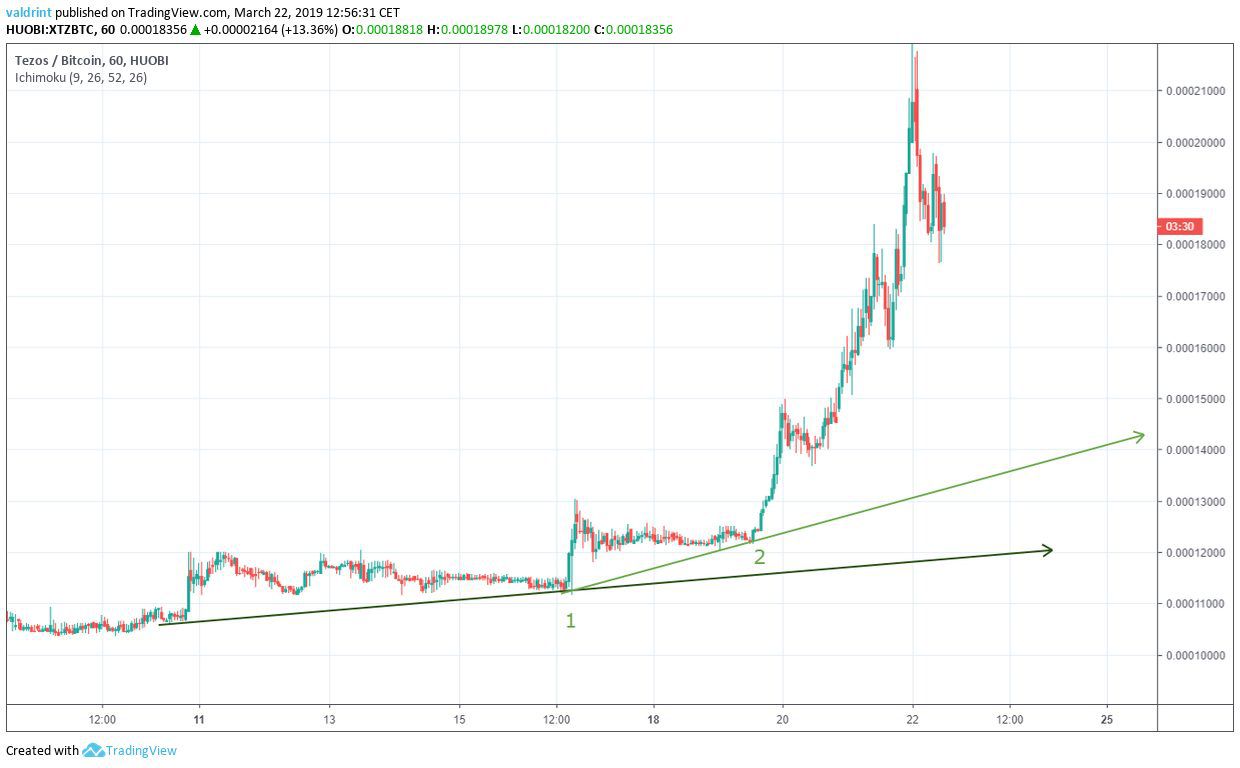 While this new support does indicate that a new trend has emerged, it is also inaccurate. It gauges the trend following the first incidence of accelerating price increase. However, a second acceleration followed a few days later.

This invalidates the current accuracy of the second support.

The price made a low of ₿0.0001215 on Mar 19. Several rapid upward moves followed, with each low being higher than the previous one. 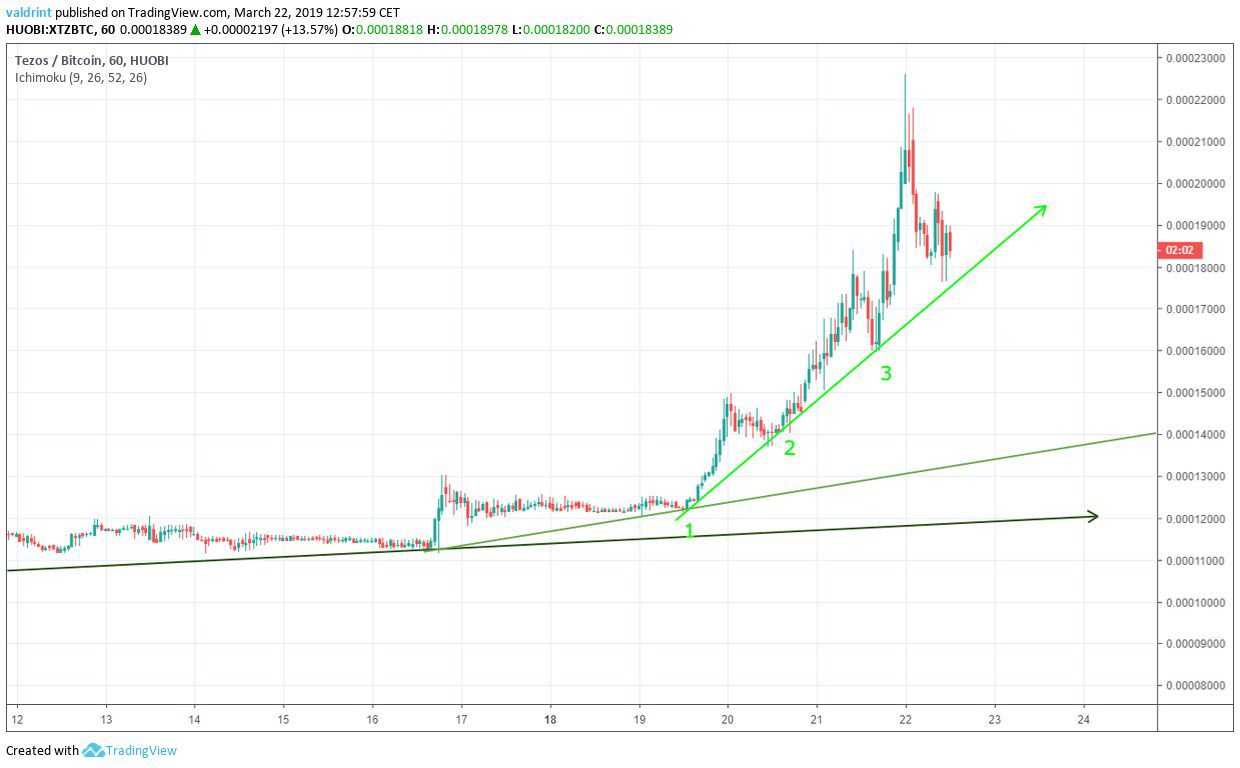 At the current time, this third support appears the most accurate indicator of future price fluctuations. It shows a steady price increases at rates greater than those suggested by the earlier two lines. Furthermore, the rate of increase currently appears to be following the most recent support very closely.

In other words, since Mar 19, the price of XTZ has increased at the same rate as predicted by the third line (in green). Because two other accelerations have so far occurred, a third acceleration appears possible in the near future. However, increases can only accelerate for so long before an inevitable breakdown. 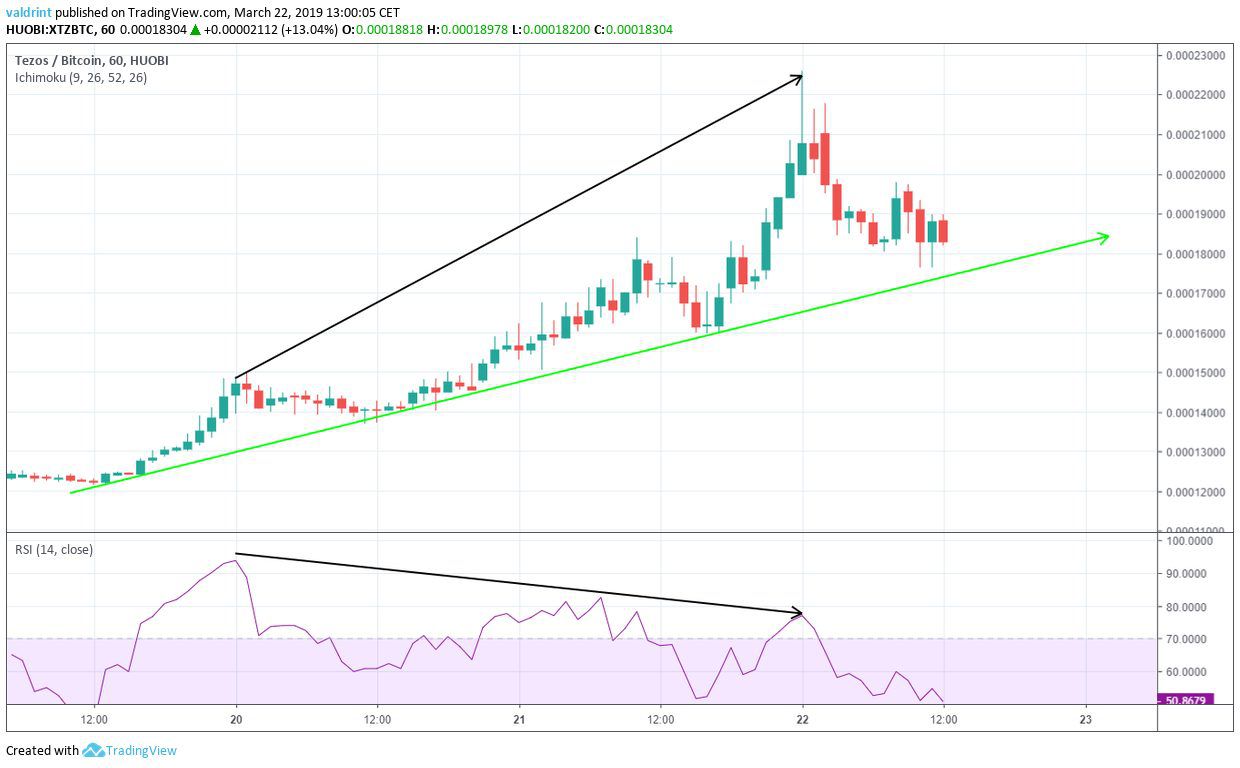 This is known as bearish divergence and often precedes decreases in price.

Price decreases are not certain but these indicators combined with the continually accelerating price increases does suggest an impending reversal. However, the indicators alone do not conclusively determine this.

On the contrary, the price of XTZ could either accelerate a third time or consolidate. Based on the data analyzed so far, it is difficult to determine which is more likely.

Support and resistance areas are created when the price revisits the same level several times. 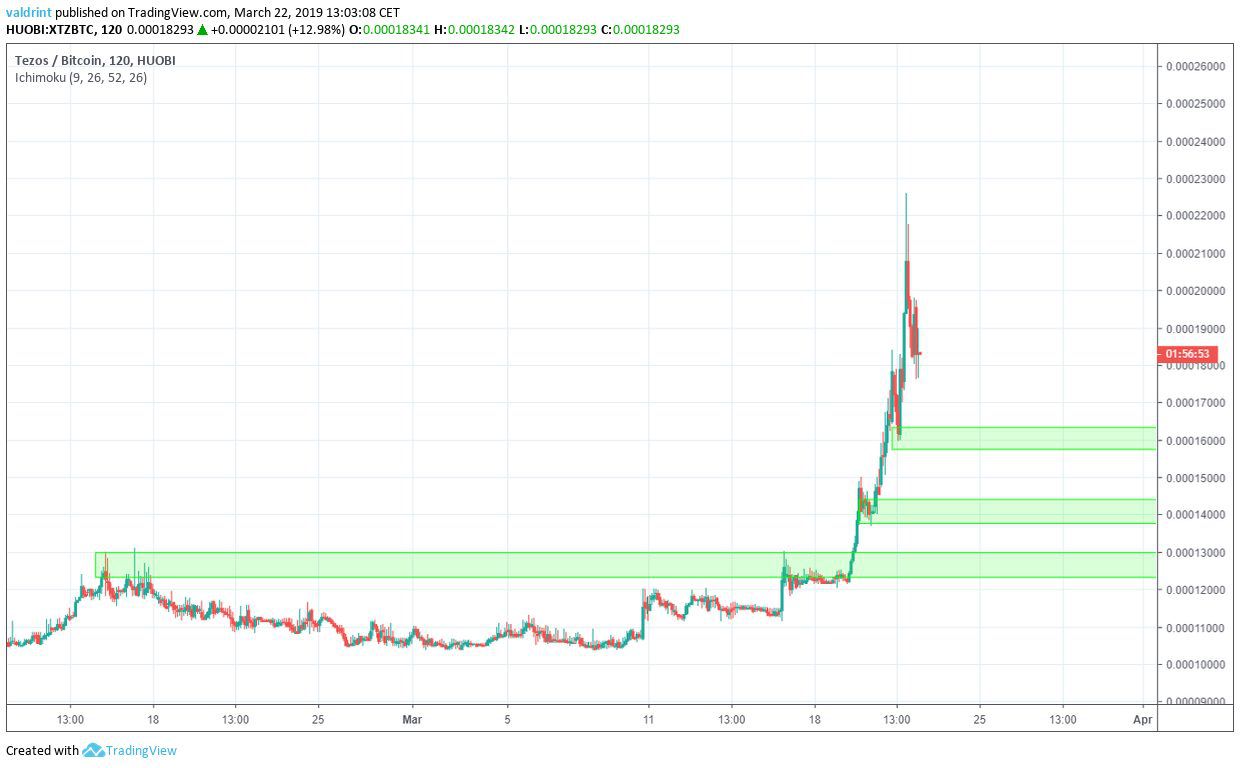 The first support area is found near ₿0.000160, followed by support areas at 0.000140 and 0.000127. If the price breaks down from the support line, these would provide likely reversal areas. Even if there is a third acceleration or maintained increases for a period, a breakdown still appears inevitable. When it occurs, we believe these prices may be reached.

A top may still have yet to be reached, however. To determine when this will be reached demands deeper analysis. 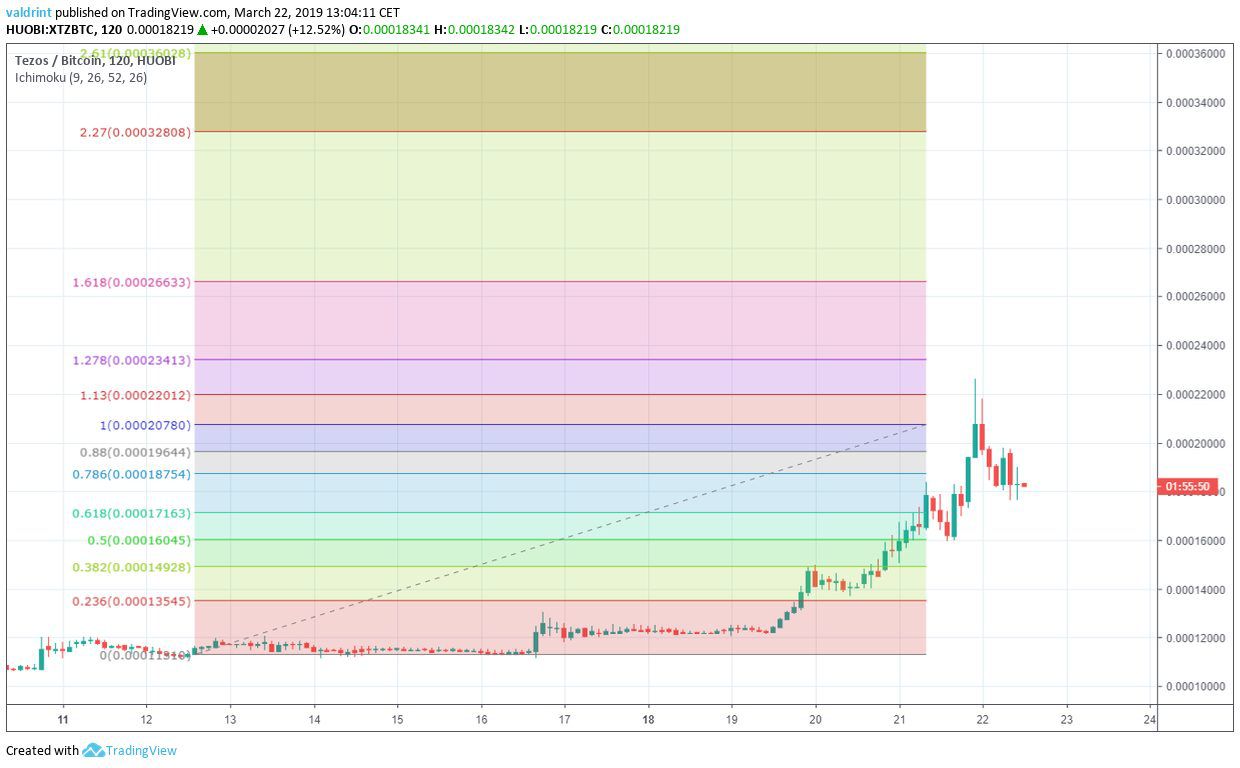 Price fluctuations for XTZ are measured from Dec 18, 2018 to Mar 19, 2019. Currently, the price is at an all-time high. It has broken out above all possible resistance areas.

Therefore, we are going to use Fibonacci retracement levels to try and predict where the price will make a top.

While not as accurate as resistance and support areas, Fibonacci retracement levels can be useful in predicting where an upward move will end.

The most probable reversal area is found at the 1.618 fib level at ₿0.000266. If the price accelerates its growth again, it is likely that the price reaches this area.

Based on this analysis, the upward move for XTZ is likely to end in the near future. If the price breaks down from the support line, this prediction will be partially validated. If it reaches the second support area before a breakdown, it will be fully validated. A breakout above 0.00024 would invalidate our prediction.

When do you think the upward move for XTZ will end? Let us know in the comments below