Share on FacebookShare on Twitter
At BeInCrypto, we provide regular updates of the most relevant and popular cryptocurrencies and digital assets on the market. In our March 7 analysis of Monero (XMR) we predicted that the price would break down from the channel we have defined below. Our prediction was validated on Mar 8, when the breakdown occurred. It has since been on an upward trend with a recent price spike on Mar 31. Is XMR about to reach $60?

A downtrend with significant volatility

We can describe volatility as how much the value of an asset changes over a given time. A volatility index... More brought XMR to lows near $50 on Mar 26.

Subsequently, a gradual uptrend preceded a rapid price spike. At the time of writing on Mar 31, a high $57.53 was reached: 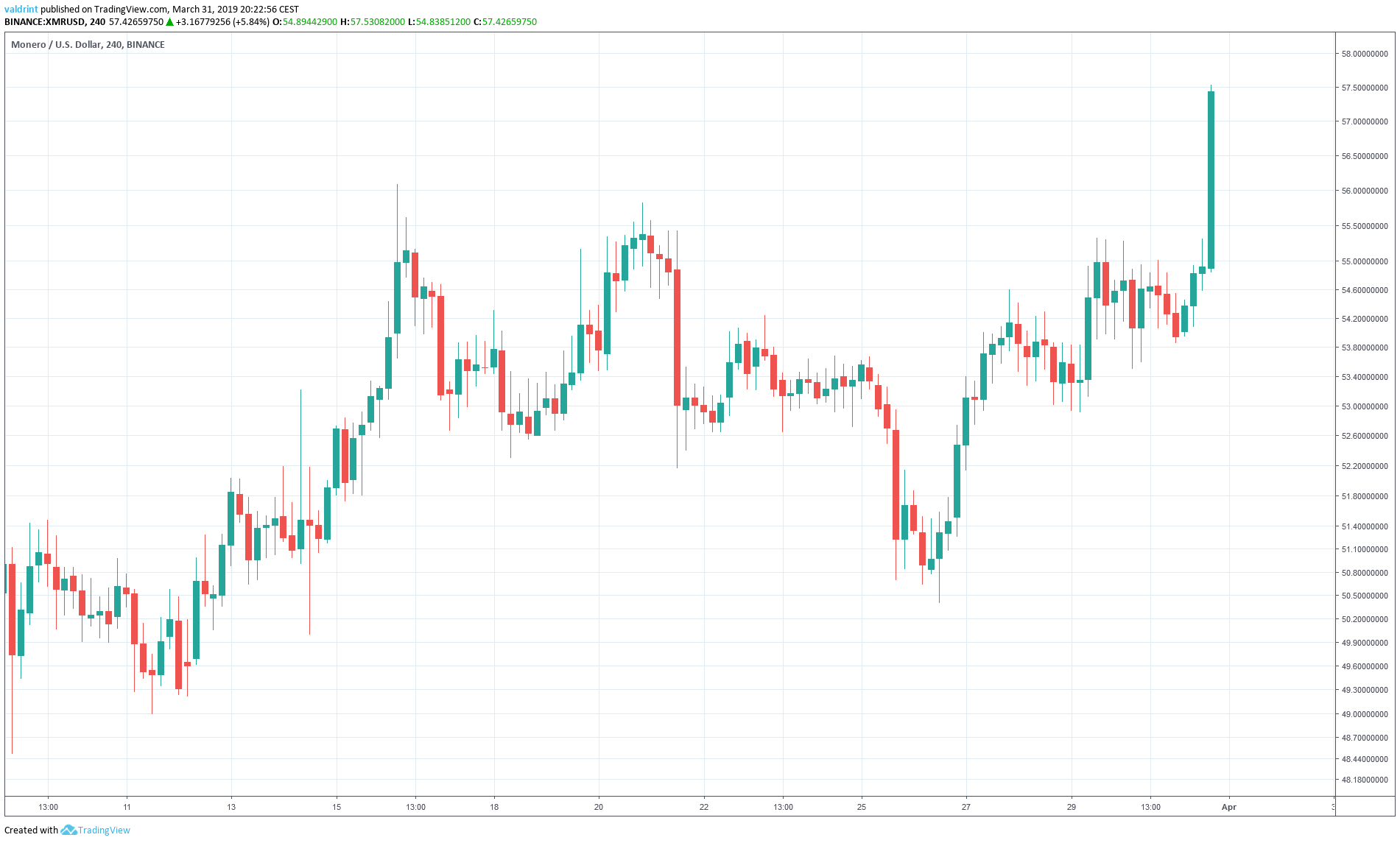 The price of XMR on Binance is analyzed at four-hour intervals from Mar 11 to Mar 31 to define its current trading pattern.

On Mar 11, the price made a low of $48.90. A sharp increase followed. It was preceded by a gradual decrease.

Since then, it has made successive higher lows. Tracing these lows gives us an ascending support line: 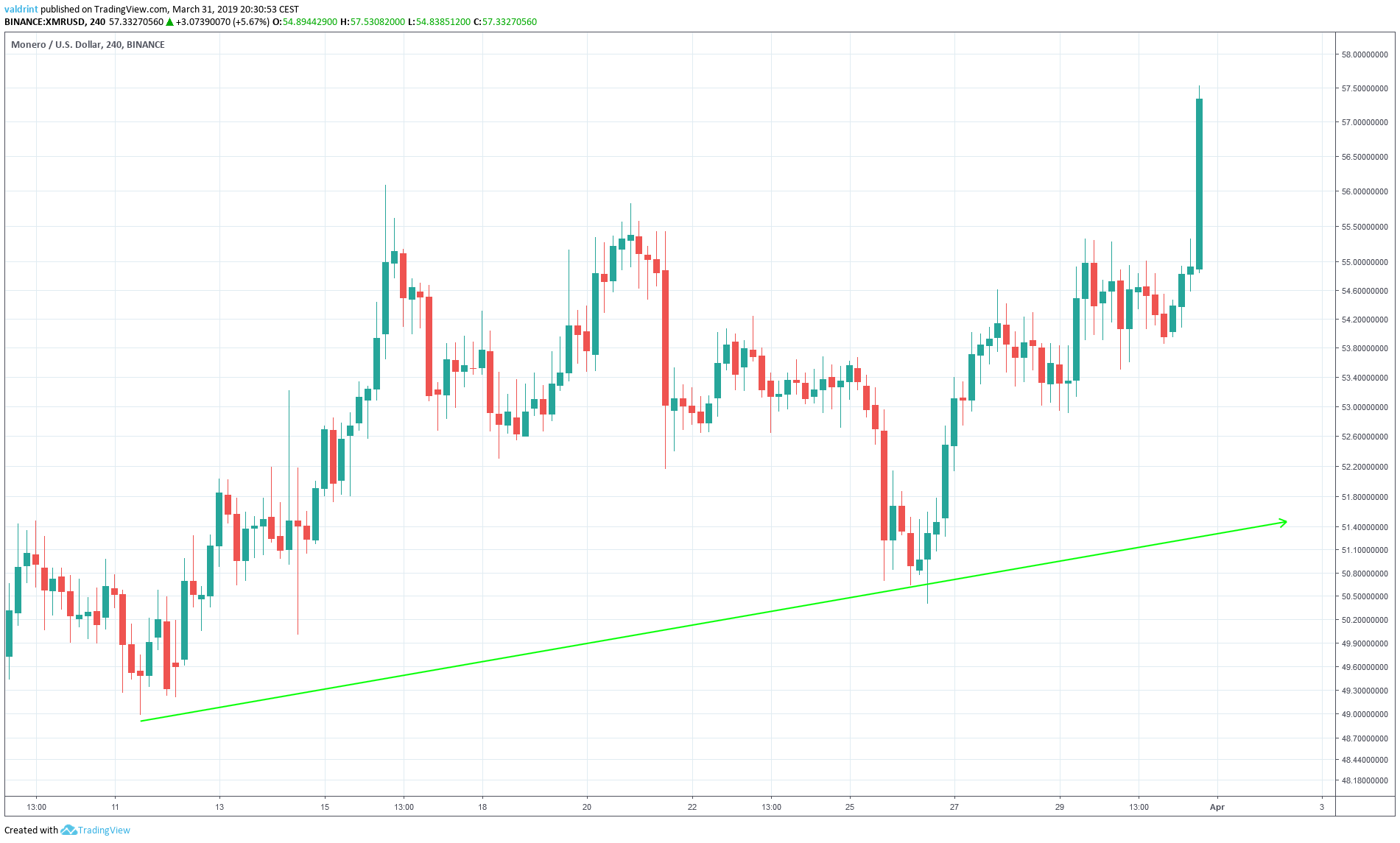 The price made a high of $56.08 on Mar 16. Several market cycles have been completed, with each high being lower than the previous one.

Tracing these highs gives us a descending resistance line. The resistance and support lines combine to create a symmetrical triangle: 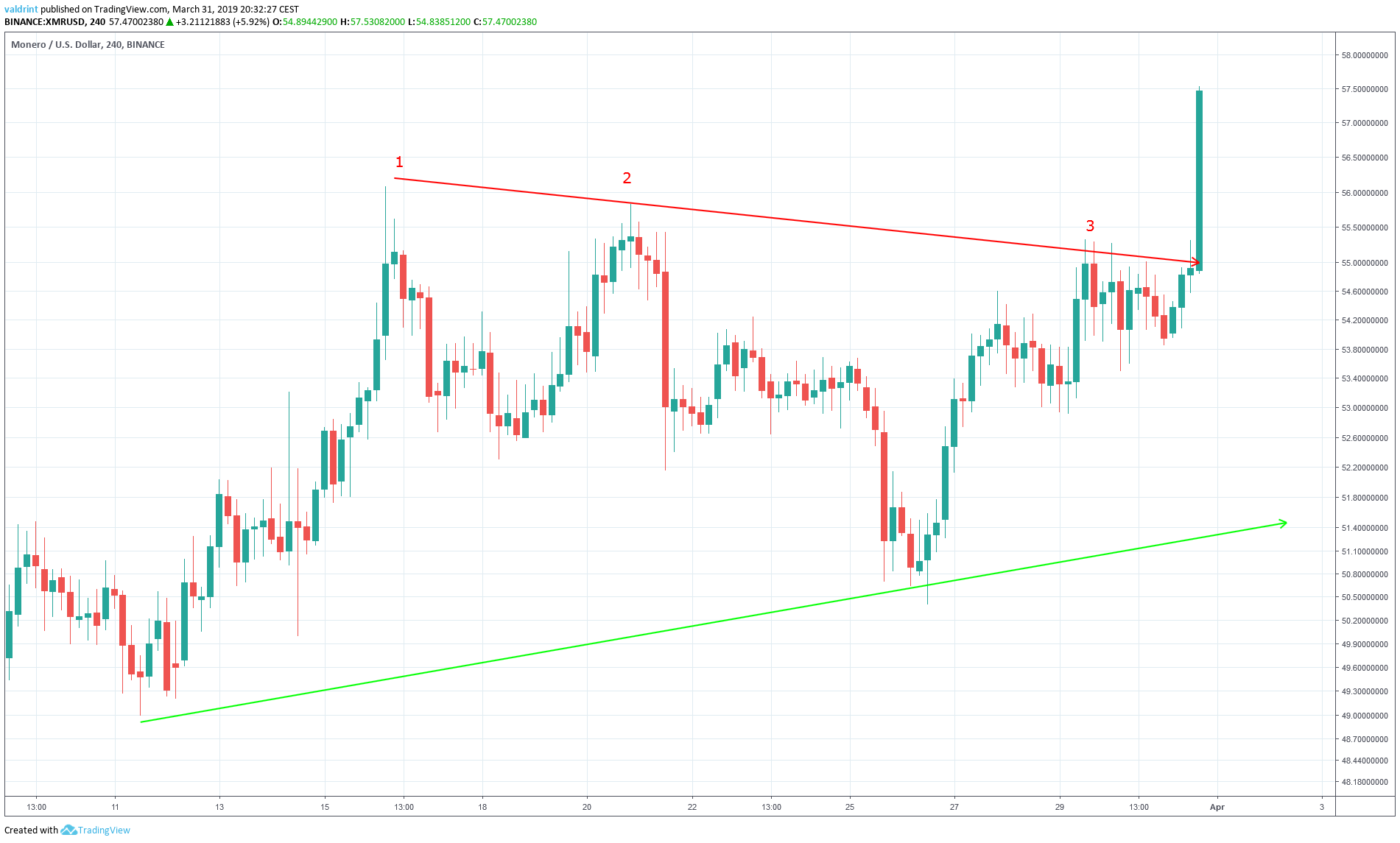 The triangle is a neutral pattern. Theoretically prices should rise and fall between the channel.

However, a breakout from this channel took place on Mar 31. making price decreases and increases equally likely.

To better assess which is more possible, we must incorporate technical indicators into this analysis. 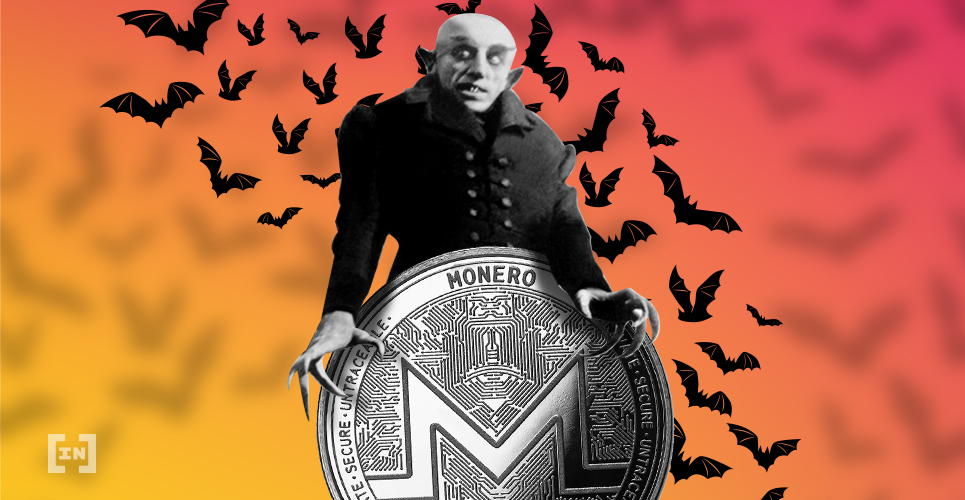 We begin with volume.
Volume is a tool used by traders to indicate how much as a given asset is bought or sold in a given period of time.
Volume is analyzed alongside the price of XMR on Binance at two-hour intervals from Mar 15 to Mar 31: 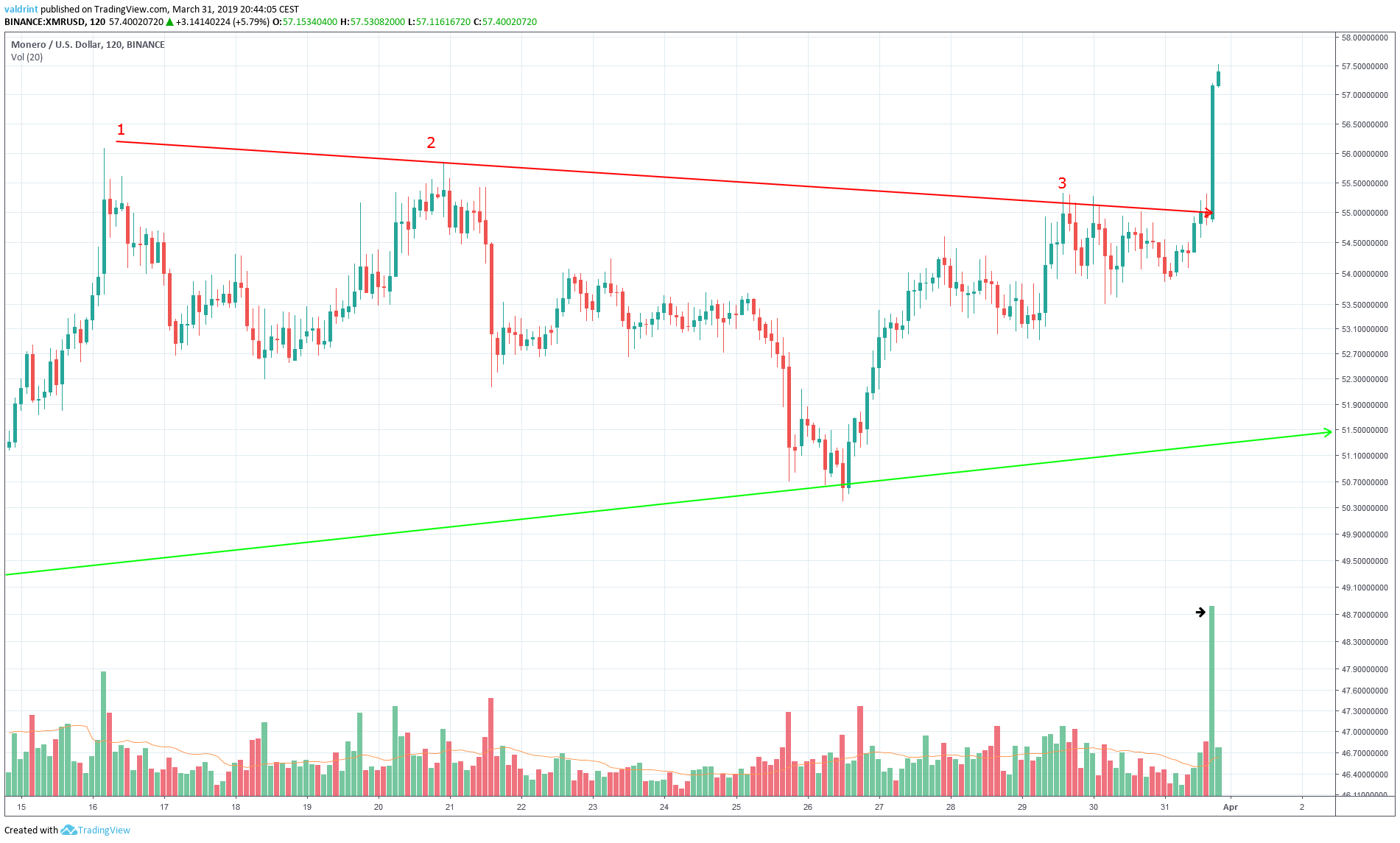 That is more than double the amount on any other candle since Mar 17.

According to this indicator, the breakout was legitimate and the price is likely to continue increasing. However, we cannot discount the possibility of a slight drop before future rise. Such a drop might represent a corredction from rapid price spikes on Mar 31 without disturbing the gradual prcie increases seen since Mar 26.

In order to better visualize possible future price levels, the price of XMR on Binance is analyzed at 12-hour intervals from Dec 1, 2018 to Mar 31, 2019 alongside resistance and support areas.

Resistance and support areas are formed when the price revisits the same level several times. They indicate possible future prices based on past patterns. 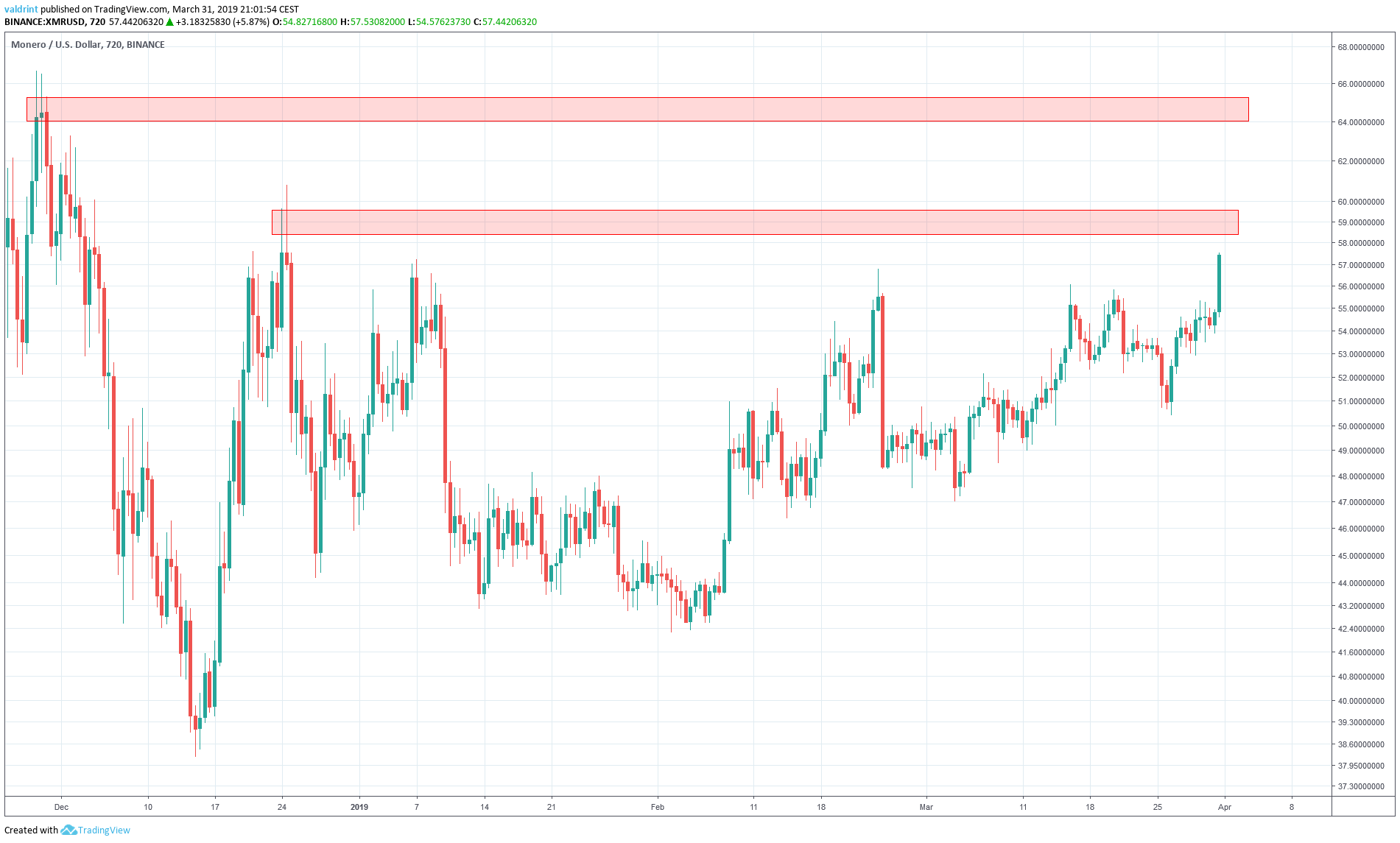 According to this analysis, it is likely that the price of Monero will keep increasing and reach at least one of these areas. 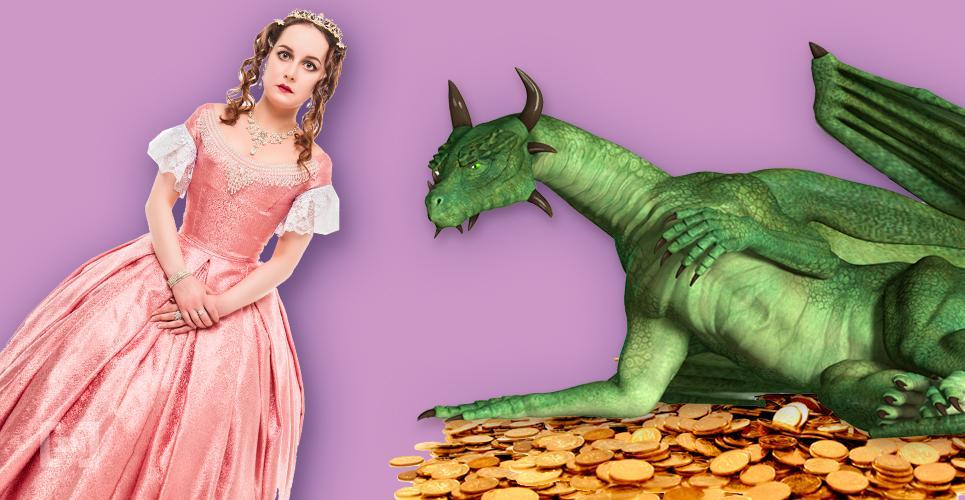 Do you think the price of Monero (XMR) will keep increasing? Let us know your thoughts in the comments below.