These Anonymous Bitcoin Price Predictions Were True — Will the Next Ones Be?

Price predictions for a date in the future are ever-present in the cryptocurrency sphere. Since some individuals are interested in cryptocurrency purely for speculative purposes, following a correct prediction can attain significant amounts of profit.

After successfully calling the December 15, 2018 bottom, an anonymous user made predictions for the Bitcoin price on six future dates. While the first two predictions proved to be correct, the third one is at risk of being invalidated. The predictions for 2020 are more bullish than our long-term predictions.

Since we have passed the mid-point of October, cryptocurrency enthusiast @cryptobull reminded everyone of the predictions made in early January.

Did everyone forget about this? pic.twitter.com/E85x1w3kOs

There are six price predictions — three in 2019 and three in 2020. Let’s look at them one by one and see how likely they are to be proven correct.

These prices were reached on April 3 and July 17. Therefore, the first two predictions were proved to be correct. 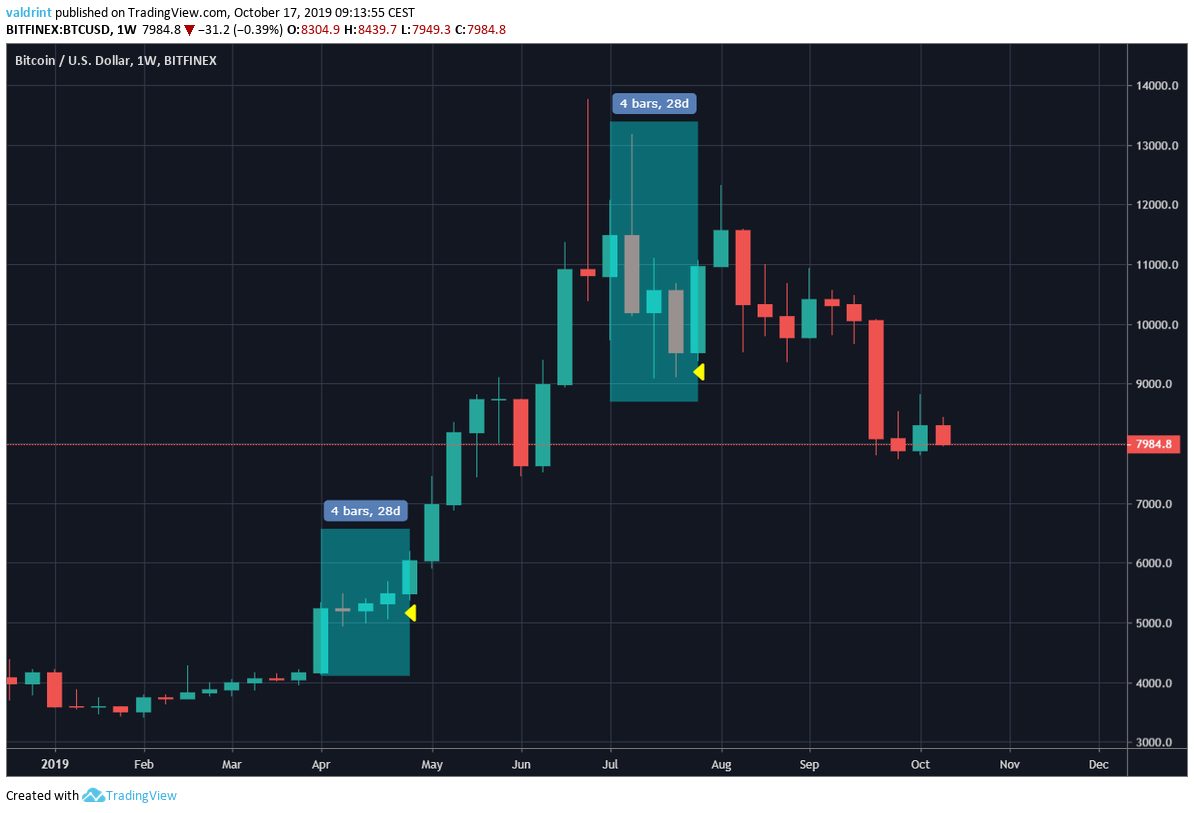 Since the price is currently at $8000, in order for the target to be hit, a 100 percent increase would be required. The price would have to break out from the current descending wedge and increase rapidly without retracing at any resistance level. Since there are only 14 days left in the month, this seems unlikely. 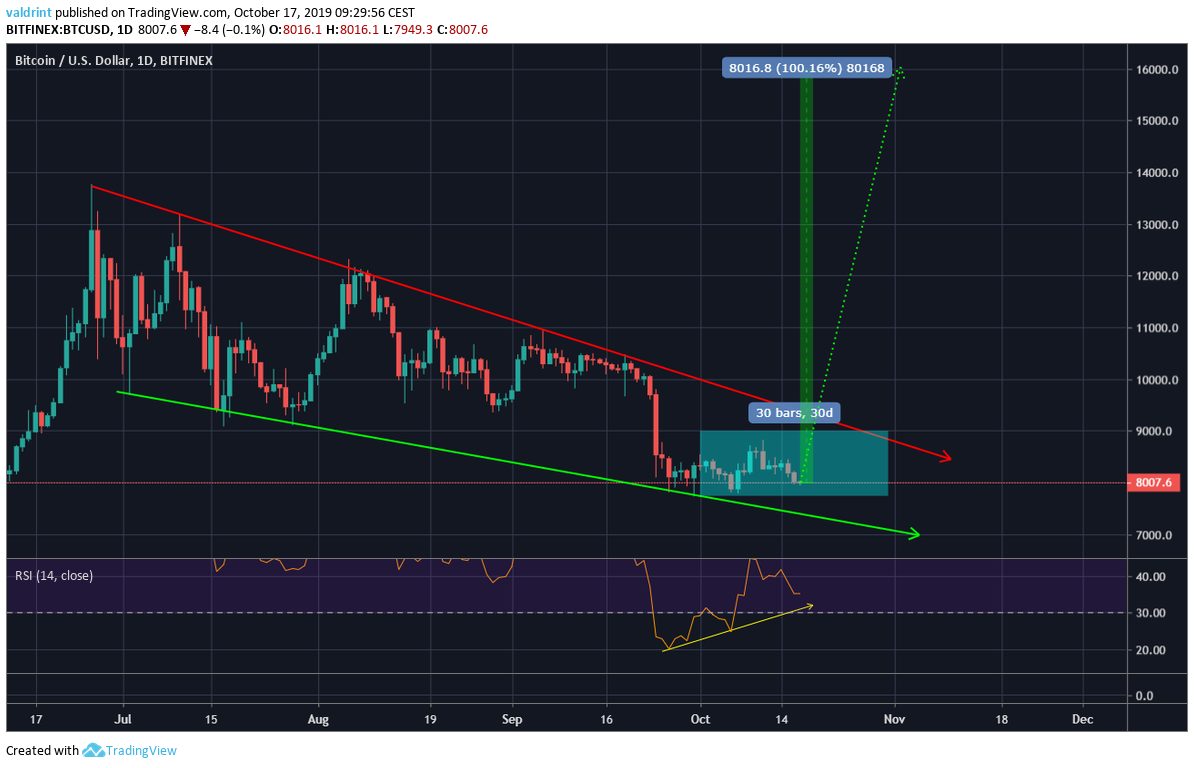 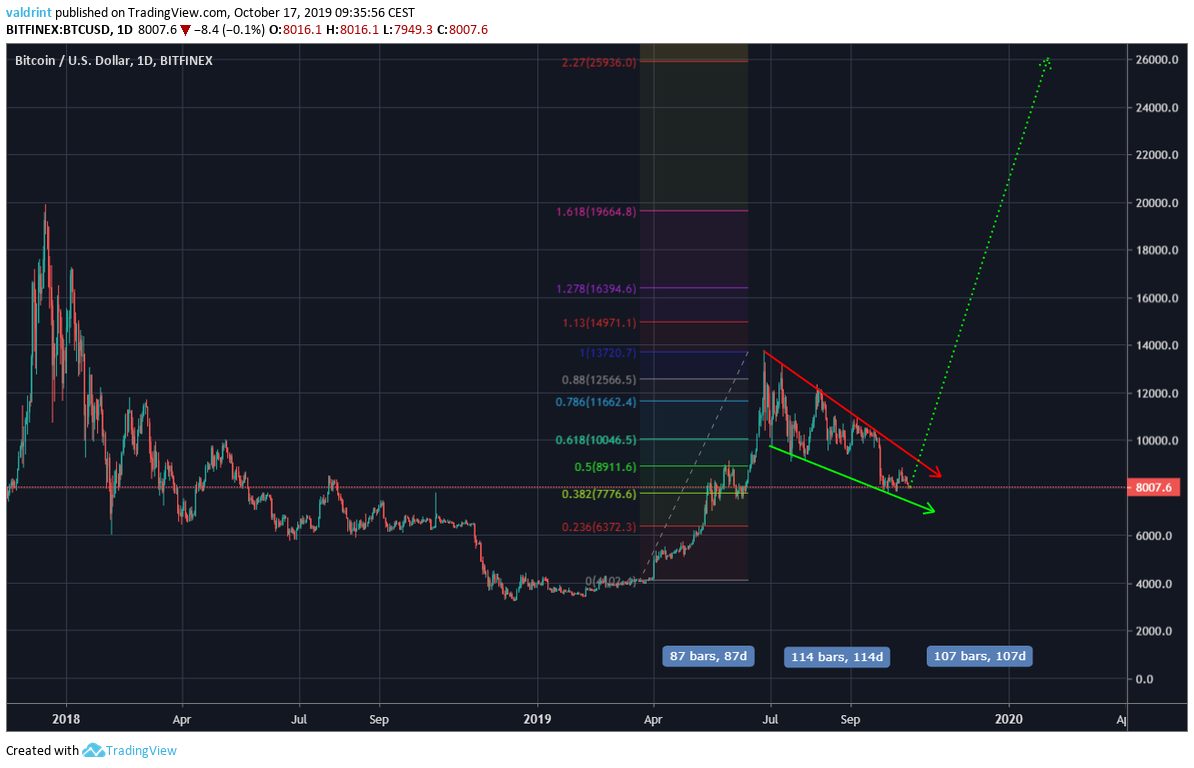 Using a Fibonacci retracement tool on the current upward move from April to July, we can see that the 2.27 fib level coincides with the $26,000 target.

The upward move lasted for 87 days while the correction is currently in its 114th day.

There are 107 days until the beginning of February. Therefore, reaching a top in February makes sense, based on the length of the previous upward move. However, the rate of increase seems too high — especially since the price is likely to find resistance at several levels.

We used a logarithmic scale and curved trend lines in order to reduce the scope of price movements in the future. 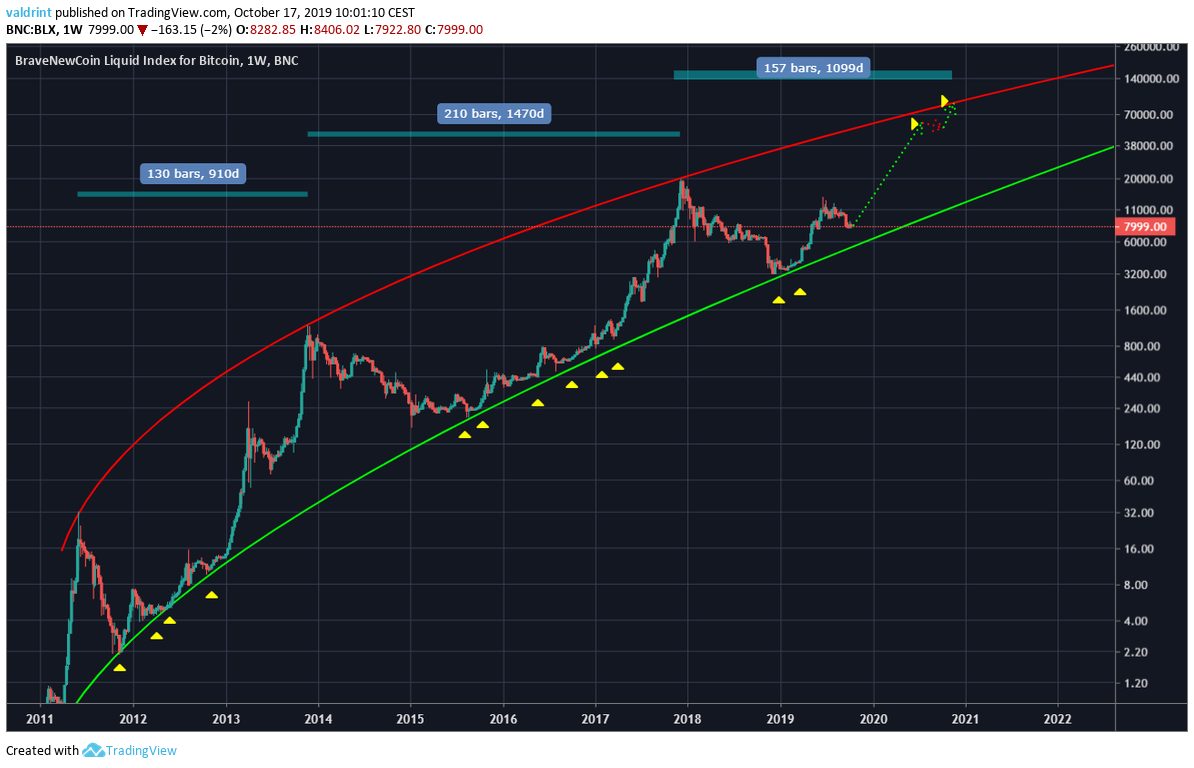 Both predictions fit within the confines of this channel, with the November 2020 prediction falling right on the resistance line.

Measuring the number of days between the times the price touched the resistance line, we get 910 and 1470 days, respectively.

November is roughly 1100 days away, so reaching another high at the resistance line seems in line with the previous movement. However, we do not think it is very likely that the price will move at such an accelerated rate.

Throughout the retracement periods in both 2012/3 and 2015/6/7, the price touched the support line several times before eventually beginning a rapid increase. On the contrary, the price only did so twice in 2019.

Additionally, logarithmic growth curves are characterized by rapid increases in the beginning — before the rate of acceleration slows down. We think it is more likely that the Bitcoin price consolidates near the support line before eventually accelerating its rate of increase.

Do you think the anonymous predictions will continue the streak of being correct? Let us know in the comments below.

ATOM Increasing at a Gradual Rate: What’s Next?

The ATOM price has been following an ascending support line since September 2019. It...