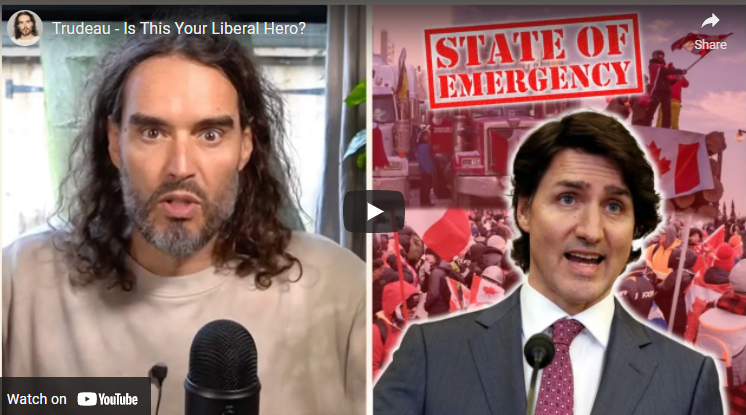 Russell Brand, British comedian at large, has ripped into Justin Trudeau’s handling of the trucker protests in Canada. In a devastating invective, Brand went as far as to say that the emergency powers recently invoked by the Prime Minister were ‘turning Canada into a tyrannical place.’

Brand’s comments came on Saturday in a YouTube video titled, ‘Trudeau – Is This Your Liberal Hero?’ The comedian strongly criticized the sanctions imposed against Canadian truckers, including the freezing of their bank accounts and cryptocurrency funds.

The funds in over 120 crypto addresses were frozen by a special injunction. The action prevents the funds from being spent, hidden or moved before a judgment. The funds were raised via crypto donations, and the frozen addresses were tied to BTC, ADA, ETH, LTC and XMR.

As Brand sees it, the naming of the Emergency Act is a total misnomer.

“What’s the emergency?” asked Brand as though addressing Trudeau directly. Brand went on to answer the question on behalf of the Canadian Prime Minister.

“I can’t do what I like whenever I want to, bang people up and nick their bank accounts and freeze their money and stop them having conversations.”

Brand dismissed the notion that the protest was anything other than peaceful, and maintains as long as the protest remains non-violent there is little excuse for the extreme measures being taken. Regarding the issue of vaccine mandates which truckers are protesting against, Brand took a pragmatic stance, supporting the right to protest rather than take a position on the matter.

The centralization of power

Brand argues that the types of powers being used against Canadian truckers should never be invoked in peace time and only ever in the event of a major war. According to the Brit, the real danger lies not in global warfare, but in the centralization of power and the ways the powerful find to justify the use of force against ordinary citizens.

“What’s more likely to happen [than global warfare], and please don’t think I am pandering to conspiracy theorists, is that centralized powers will coalesce in alignment and in agreement with corporate power to limit the ability of ordinary people to protest about the condition of their lives,” says Brand.

Kraken CEO Jesse Powell recently confirmed that even should corporations wish to, they have little recourse but to bend to the will of the Canadian Government. As Powell put it, “Due process is for plebs. Might makes right in Canada.”

In summing up, Brand points to the hypocrisy of Trudeau who has always presented himself as a figure of ‘tolerance, compassion and open-mindedness’. In that spirit Brand suggests the Prime Minister tries talking to, rather than strong-arming his political opponents.

“If peoples’ voices can’t be heard, if you’re only willing to listen to voices you agree with, that doesn’t sound like democracy, it sounds like tyranny.”

Want to discuss Russell Brand’s take on this, or anything else? Then join our Telegram group.