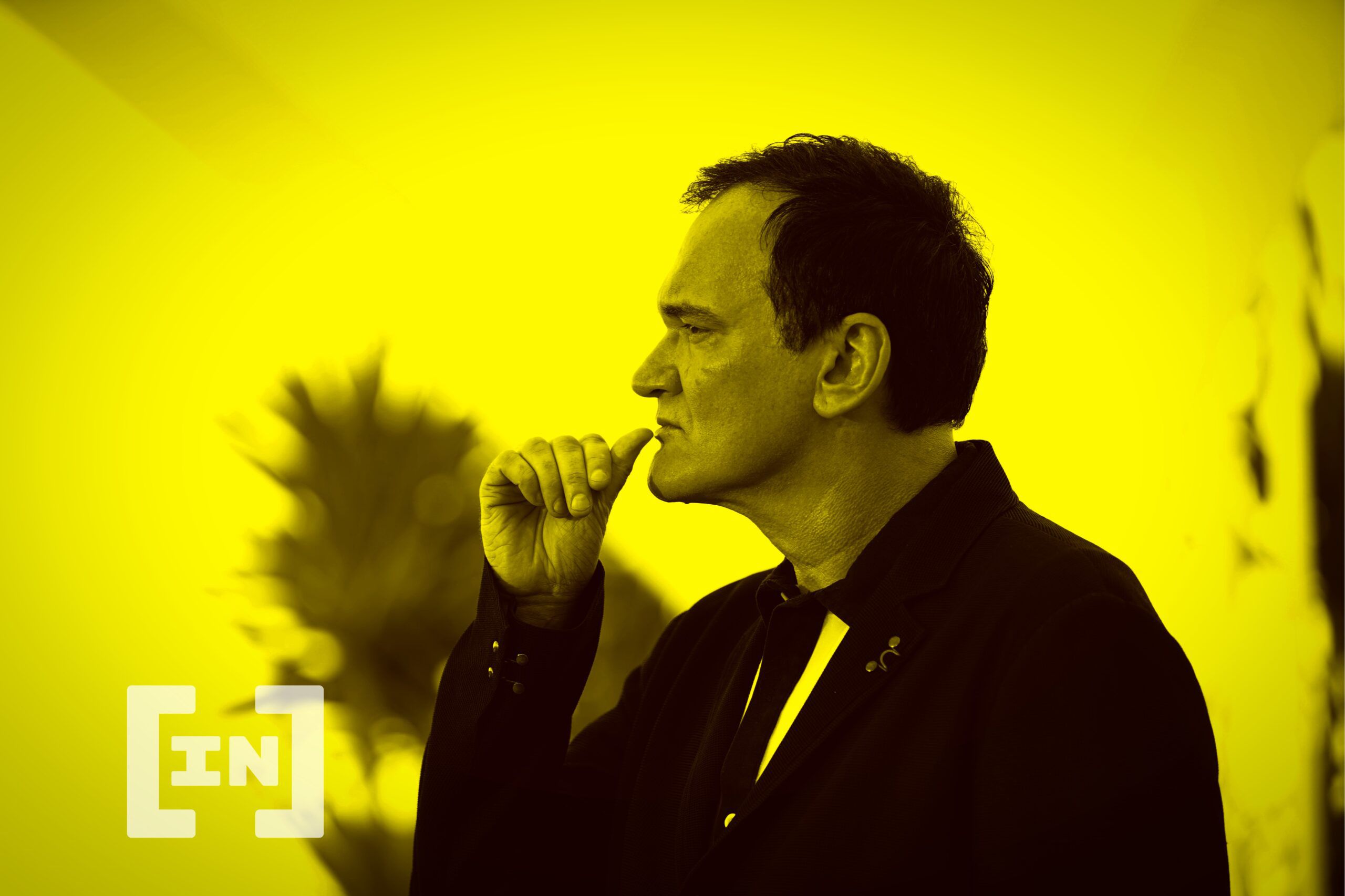 Quentin Tarantino has embroiled himself into an argument about who actually owns NFTs.

In 1994, Quentin Tarantino made film history with the Oscar-winning film “Pulp Fiction.” It was to change the entire film industry from the ground up. It made the independent studio “Miramax” famous. Now, 28 years later, Tarantino is making history again.

Tarantino is one of the first film directors to turn to the booming NFT market. In a collaboration with Secret Network, Tarantino made handwritten, unpublished screenplay pages into an NFT on the 17th of January – and is promptly in a legal dispute – with Miramax.

Since 2021, NFTs have been on everyone’s lips. And not only within the crypto world. The celeb world is now very au fait with NFTs. Celebs had a strong uptake of Cryptopunks, and later, the avatars of the Bored Ape Yacht Club conquered the imagination. Profile pictures of numerous celebrities, athletes, actors and cryptonerds all jumped on the NFT bandwagon. All of a sudden, NFTs went gangbusters and hit the mainstream. Everyone wanted to own one, and so NFT sales rose to $10.7 billion in Q3 2021, more than 700%.

And so it’s no wonder that the film industry is jumping on this bandwagon. Kevin Smith not only sold his last movie “Killroy was here” as an NFT, but also founded the “Jay & Silent Bob Crypto Studio,” where he sells the Smokin tokens. And Warner Brothers released countless avatars to Matrix, Space Jam, and others as NFTs.

But the attention of a wider mass of film enthusiasts was probably attracted by another favorite of all film nerds – Quentin Tarantino. In a video, the cult director explains that at first he didn’t even really know what an NFT was supposed to be. But he tells storytellers that his handwritten script had been in his office for years. No one has seen it apart from his typist. The names of the protagonists were also different, so the Vincent character was called Edgar at that time. And it was only in the process of digitization that Tarantino realized the strength of NFTs, and knew that he had something special.

The process of digitization was taken over by SCRT Labs, the core development team behind Secret Network – on whose blockchain the NFTs are published. Founded at MIT in 2015, SCRT Labs is dedicated to developing products and systems that accelerate the adoption of privacy-first and decentralized technologies.

Secret Network is one of the first blockchains with standard data protection that allows the user to create and use applications that are both permission-free and privacy-compliant. This unique functionality protects users, secures applications, and unlocks hundreds of never-before-mentioned use cases for Web3.

That’s why Tarantino chose the Secret Network. Secret NFTs are non-fungible tokens equipped with programmable privacy features that live on Secret Network. The special feature of the Secret NFTs in Tarantino’s case is that only the owner can see the content of the scenes. And so you can listen to the director’s audio commentary, which has never been heard before. All in all, this sounds like a great use case of NFTs for any movie fan. If it weren’t for Miramax.

On November 16, 2021, the studio of Harvey Weinstein (now convicted of sexual abuse) filed a lawsuit against Tarantino in relation to the release of the NFTs. Miramax claims that while Tarantino has some rights to the 1994 film, it has no right to “unilaterally create and market NFTs.”

I don’t think anyone should be surprised that NFTs are not explicitly listed in a 1993 treaty. The Oscar winner and his lawyers have a similar view:

“Tarantino has every right to publish parts of his handwritten original script for Pulp Fiction, a personal creative treasure he has kept to himself for decades.”

Or as Captain Koons, Christopher Walken’s character in Pulp Fiction, would put it, “You can put your lament where the sun isn’t shining.”

And here we are in January 2022, Tarantino sticks to his plan to release the NFTs and Miramax tightens their choice of words towards Guy Zyskind and Secret Labs:

“Regardless of the limited rights that Mr. Tarantino has to publish scripts, they do not allow the production of unique NFTs associated with Miramax’s intellectual property, and its opposite position is the subject of a pending lawsuit,” the email from Proskauer Rose LLP continues. “What you refer to in your press release as a ‘never-before-seen handwritten script’ by Mr. Tarantino may not yet be ‘iconic’ or a ‘fan favorite,’ so it’s obvious that you and Mr. Tarantino are trying to capitalize on Miramax’s content, intellectual property rights, and brand.”

Quentin Tarantino won’t be the only one with legal problems

And already we are on the most important topic that will arise again and again in the future in connection with NFTs: Who has the right to an intellectual creation? The client or the creator? Is it possible to sell this right and also claim it for use-cases that don’t exist yet?

In general, the following applies to NFTs: Anyone who creates an NFT using a third-party work should ensure that they have the permission of the copyright holder. Copyright provides a “bundle of rights” that belong exclusively to the owner of the copyright in a work. These rights include the right of reproduction, creation of derivatives, distribution of copies, public performance and communication to the public.

For the same reason that a musician needs permission to sample or remix someone else’s music and sell it as his own, the creator of an NFT needs permission from the copyright owner of the work he embeds in an NFT and offers for sale.
Now it can hardly be said that Tarantino is not the creator of the script and thus the author. He wrote it. On this script, which Miramax has optioned, he has made a film that made the studio come into being in the first place. So is Tarantino breaking the law by publishing it? At least not if you look at Guy Zyskind’s answer on Twitter:

“Your attempt to intimidate and harass us and our community will not work.”

Who owns an NFT?

With this sentence, the CEO of Secret probably speaks from the soul of many people in the crypto scene . Or to paraphrase Mr. Pink, a character from Tarantino’s film Reservoir Dogs:

“I don’t wanna kill anybody. But if I gotta get out that door, and you’re standing in my way, one way or the other, you’re gettin’ outta my way.”

And so anyone who wants to be sure that an NFT came from Tarantino can do so here.

One thing is certain: the whole process and the attention will not have harmed the price. Currently, 13096 people have already registered for the auction of the 7 NFTs. Happy bidding!