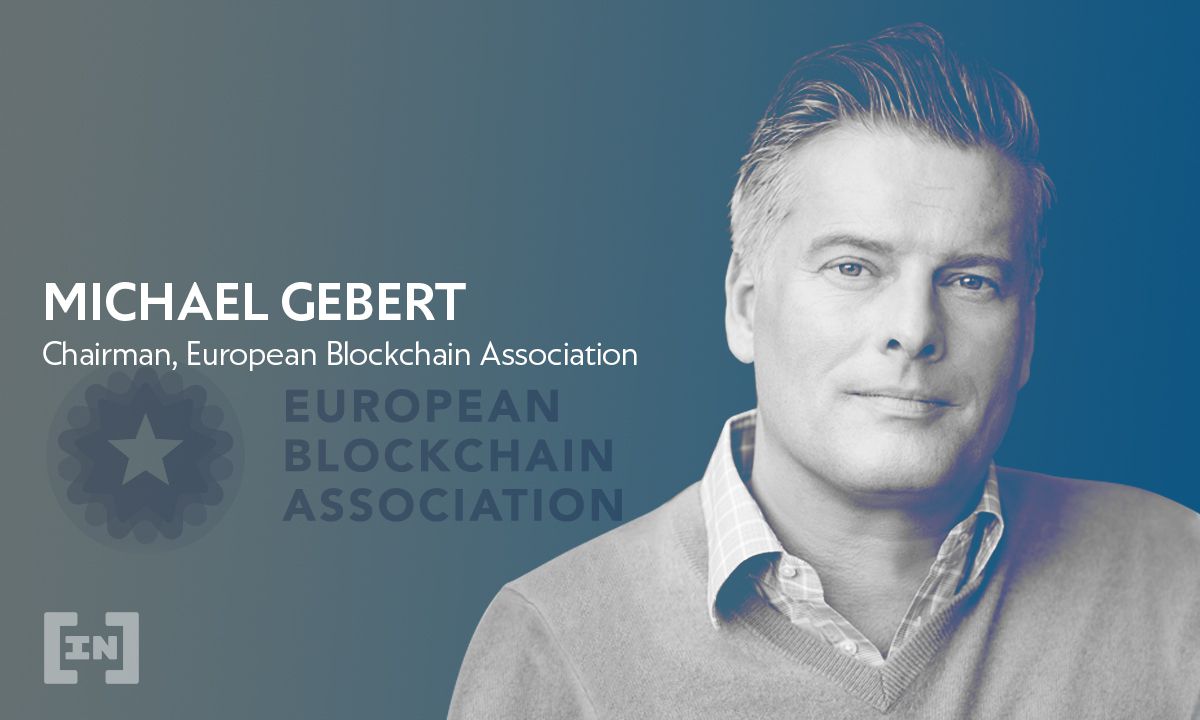 At Hong Kong Blockchain Week 2020, BeInCrypto spoke with Michael Gebert, the chairman of the European Blockchain Association, managing director of the CrowdSourcing Association and a founding member of the German CrowdFunding Network.

Michael Gebert also serves as an adviser for the EU Commission in the CrowdFunding Stakeholder Group and is a nominated member of the TAB Begleitkreis “Digitale Arbeit” for the German Bundestag.

As a media partner of the European Blockchain Association, BeInCrypto had the chance to catch up with Gebert. Our discussion focused on the new regulation in regard to the crypto industry, Europe’s position in a race for world leadership in technology, a digital euro, Brexit, and many more.

“Not regulation per se, but just an indication of regulation”

BeInCrypto: It seems Europe is moving towards regulatory clarity for the crypto and blockchain sector. In September, the finance ministers of Spain, Germany, France, Italy, and the Netherlands proposed to the European Commission the creation of a strict regulatory project on asset-backed cryptocurrencies — such as stablecoins — in order to protect consumers and preserve the sovereignty of their states. How does the European blockchain community feel about this regulation?

Michael Gebert: We think, it’s a very positive step forward that there is now some kind of indication of regulation. It’s not regulation per se, it’s just an indication, at the moment. For market players, it means more clarity, and more legal certainty. If it’s positive for the crypto market at the moment, is to be discussed, but in general, I think it is a very good inditation.

First of all, the EU Commission is now taking the matter very seriously. And secondly, it has a common approach across all countries in the EU, which, as you might know, is kind of a struggle of itself. So it was very surprising to see how fast they agreed on a roadmap.

They agreed on the regulatory and legal framework, and how complex individual compliance and industry standards may have been integrated in order to give a direction. For us, it is similar to an open call to the industry, as they now can really predict what will happen to reflect that future regulation in their business models and offerings. Now, you definitely know where the direction is. And — whether you like it or not — you can adapt.

BeInCrypto: Do you think European authorities have the knowledge needed to regulate this rapid market?

Michael Gebert: We asked the same question in our heads: are you or are the decision-making people knowledgeable? Or isn’t there a lot of lobbying power from the old banking financial infrastructure? And this is a question that cannot be answered easily.

Of course, there is a lot of lobbying power from the existing power game players, meaning the banking and finance industries. However, all these major players cannot stop the change. And therefore, the knowledge, even in these traditional industries, has been upgraded.

At the end, everything is structured in a possible decision-making paper and brought up to all EU ministers. To be honest, the per se regulation framework is, to some concern, not ideal. But as an overall first approach for the roadmap, it’s a good step. And I’ve seen the papers, the decision and pre-decision papers, and they were definitely on a very high level.

BeInCrypto: Do you think this kind of regulation will slow the progress of the European blockchain industry, or it will be beneficial to it?

Michael Gebert: It depends which industry sector you are having your business in. Let’s say, you are located in the logistics sector of blockchain solutions, not finance. That definitely provides an advantage for a European company located in Europe to have a substantial framework and regulatory approved, set up in order to develop a blockchain-based solution. Even if it might be more regulated than in Asia, it’s definitely more trustworthy for us in order to put that system in place for our international global trade.

As for finance, we just spoke with some larger traditional investment funds and they indicated that — with the new regulation in place — they would be able to allocate a certain percentage of their overall investment budget to crypto-related investments. They will allocate billions into the crypto sector. So there may be ten, 20, 50, 100 companies doing that. Then, there is a lot more power in the game, and this is good for the industry.

BeInCrypto: It seems regulators are focusing on stablecoins. Why do you think they want to regulate stablecoins, in the first instance?

Michael Gebert: It’s interesting as this was the initial reaction of the crypto community. We spoke with the European Commission about it. They were not against stablecoins as a crypto asset. They looked from the perspective of monetary and competitive policies. And so these were basically the drivers, which then led to the regulation.

They just want to make sure that the monetary and competitive policies they have in place are not overruled. Which means if I structure a business as a stablecoin and crypto asset environment, I would read the existing monetary policy and build my solution on top of that.

BeInCrypto: Do you think the planned regulation will facilitate the creation of more euro-pegged stablecoins?

A race for world leadership in technology

BeInCrypto: So now, let’s focus on geopolitical issues. China and the United States are in a race for world leadership in technology. Europe appears to be misplaced and trapped between both fronts. What would Europe need to attract tech businesses such as, for example, blockchain startups?

Michael Gebert: Traditionally, Europe has always been in a sandwich position. We have always been the salami in the sandwich, where one toast is the Asia Pacific region, and the other is the US.

Unlike Asia, Europe is traditionally very skeptical when it comes to changes. Therefore, Europe will definitely take a more difficult position in terms of being fast. I think Europe shouldn’t try to struggle to be a first-mover. It should look more into what’s happening in the East than in the West, in China.

Silicon Valley is a little bit dried out, at the moment, especially when it comes to innovation. You have just big players like Google, Facebook, and Amazon, but that’s all about it.  Therefore, I think Europe would have a strong position being the best reliable partner for the East and the West.

I hope that politicians will follow this path, although it doesn’t look good, at this moment, as they are stubborn and see China as a risk and not as a chance.

I’ve been to Shenzhen several times, and talked to Tencent and WeBank. My personal experience in China is positively shocking, even brutal, when it came to see how advanced they are compared to Europe. I hope Europe will find a position as a strong leader in security.

BeInCrypto: The central bank digital currency (CBDC) space has been expanding rapidly, and it seems Europe is flirting with the idea of a digital euro. So how will this digital euro affect EU citizens, once it’s introduced?

Michael Gebert: You know, there are two opinions. On one hand, it is a dramatic situation, because the digital euro means total transparency, because it’s not really decentralized. And everything that is controllable in not a good way, can be misused.

On the other hand, the digital euro can be a perfect solution when it comes to business purposes, because transparency means reliability. As a technical solution, it’s tremendous as it will provide reliability for transactions within companies.

The digital revolution in the UK, France, Estonia, and Spain

BeInCrypto: Brexit is around the corner. Earlier in November, Chancellor of the UK Treasury Rishi Sunak remarked that Brexit offered a new chapter in the history of the country’s financial services industry. Sunak said that the government plans to harness the potential benefits of novel technologies like stablecoins and CBDCs. So how viable is this idea and what impact would the UK’s CBDC have on the EU-UK economic relationship?

Michael Gebert: The UK has always been and remains a special candidate for alternative financing. In 2008 — 2010, it was the leader in crowdfunding. London is the drumbeat of finance in the UK, and I think they will try to position themselves as a European China in regard to digital products. London will drive an interesting regulatory model in order to attract the needed volume of money.

Since there is Brexit, a lot of things haven’t been decided yet. If they decide to play this game, it may be a dangerous play for London, as many investors will prefer the security that Europe offers. The UK will definitely present very creative solutions to maintain the volume of financial activity.

BeInCrypto: In your opinion, will the French blockchain industry lead the way in Europe as public organizations seem to support this new digital revolution?

Michael Gebert: Our experience with France is quite interesting. As a country, it’s definitely not a leader in this, because France is a very centralized country. Therefore, we need to talk about Paris.

Regarding regulation and its effect on an ecosystem and on their future thinking, yes, they are leading. They are beating the rest of the EU partners, they stimulate the rest of the countries.

France may think it is the leader in Europe, but then arrives Estonia showing their innovations, and they are definitely the winners for now. On the other hand, if France doesn’t focus this technological revolution only on Paris, but apply this level of innovation to the rest of France, they will definitely have a chance of becoming the leader in Europe.

BeInCrypto: In November, Spain approved a sandbox regulation for the fintech industry. Can you comment on that?

Michael Gebert: I think Spain is very healthy. The last meeting we had was in Malaga, and we had a lot of players from the region. There are two EU projects we have, at this moment, which are being led by Spanish universities.

Currently, Spain’s innovation is being driven by industry sectors and universities. Interestingly, this seems to be concentrated in Madrid and in the south of Spain, in my opinion.

BeInCrypto: Thank you once more for the interview.