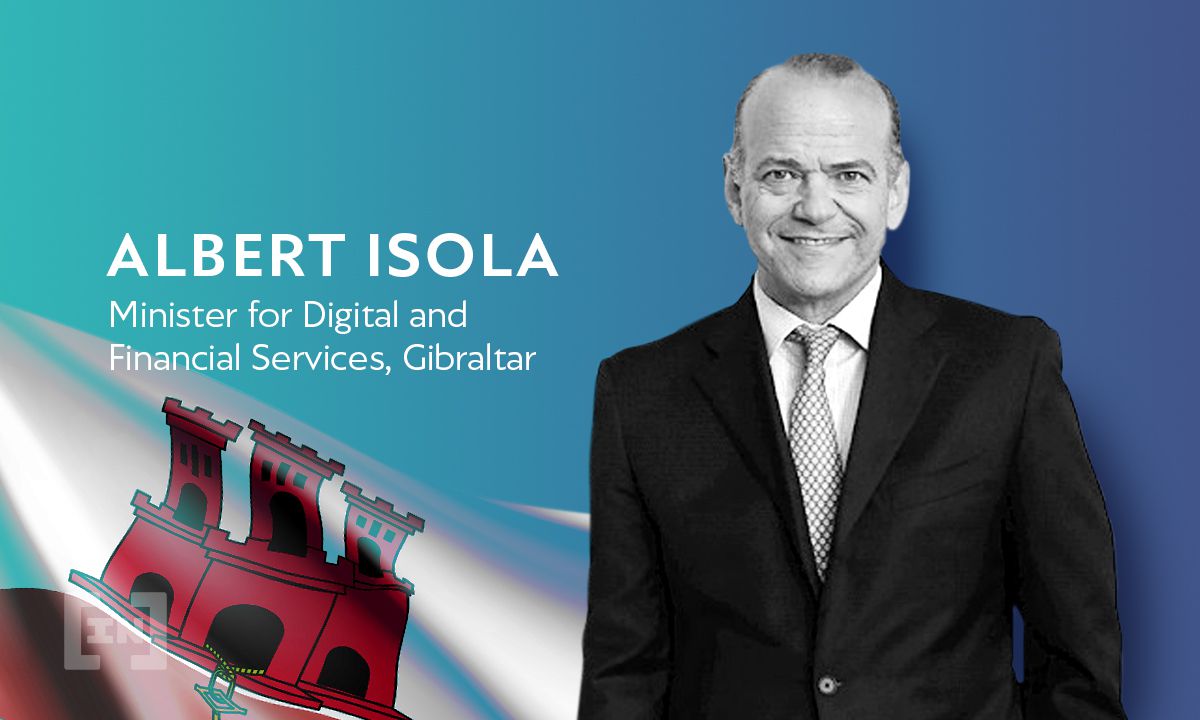 BeinCrypto spoke to Minister for Digital and Financial Services in Gibraltar, Albert Isola, about the British Overseas Territory’s work in building a regulatory framework for distributed ledger technology.

Blockchain and cryptocurrency regulation is no easy task. Governments worldwide are battling to figure out how they should respond to the surge in this novel area of both finance and technology. The response globally is varied from the SEC in the United States chasing up crypto firms to the other countries’ outright ban of cryptocurrencies.

One territory that has been on top of its game when it comes to regulations is Gibraltar. Despite its small size, Gibraltar has been among the earliest and more forward-thinking governments globally when it comes to cryptocurrency and blockchain technology.

In 2014, a private sector Cryptocurrency Working Group was established to look into cryptocurrencies. This came right after bitcoin’s first bull run and the first peak in interest in crypto globally.

This private working group then joined the government of Gibraltar in accessing whether cryptocurrencies and their underlying technology matched the risk profile of the jurisdiction, whether it was safe and whether there was a benefit in becoming involved with it.

“We took the view also that by bringing in pragmatic and proportionate regulation, we will also be keeping out stuff from the jurisdiction that we didn’t want to happen here. Which is also a risk because if you don’t regulate it, it can happen if you don’t license it, they can come and do it in your jurisdiction. So we dealt with both things at the same time, in what we call the DLT legal framework, which we published in October of 2017.”

The law came into effect in January 2018. This was quickly followed by a positive response from DLT blockchain firms, applying for licences.

“Now we’ve got around 15 that are fully licensed and regulated. We’ve also got some more in the pipeline coming through,” says Isola.

“What they need most from the regulator is interaction”

Isola credits Gibraltar’s proactive approach to this emerging sector and professionalism by the regulator for the its success.

He explains that the firms are able to speak to the regulator about any issues and understand what is expected of them.

“What we want here is that if any firm has got a problem, the first place they call is the regulator. Last thing we want them to do is to hide it, try and fix it themselves without telling anyone. Those have got disaster written all over them. So, what we do in providing proportional regulation is have a regulator that you can pick up the phone and talk to and talk through opportunities and challenges.”

He explains that this relationship has to be built on a professional understanding, rather than a patronizing, antagonistic stance.

A collaborative approach from the start

Isola stresses that the role of the regulator is not to force firms to submit to the legislation but rather ensure they are willing participants in the process.

This has a knock-on effect, where firms that don’t meet the necessary standards can identify where they are lacking and improve.

“So the licensing process is not a question of forcing people through the head of a needle, it’s about getting to the same place that we want to be together, in the shape that we need them to be in order to meet the standards that we set.”

Isola recommends those wanting to create policies around blockchain and crypto work with experts in their jurisdictions to ensure they understand the space.

“I think the more that countries interact with the experts in that jurisdiction, the better because governments don’t understand this business, but they do. So it’s a question of balancing out a process and a structure that is good for business with the protection of jurisdiction, its consumers, and its reputation from the risk that these things have, and mitigating risk is a part of what we do. So, without engaging with the experts in each of the jurisdictions then you’re going to have a problem.”

Keeping up with the times

Another lesson for regulators from Gibraltar is the nature of their legislation. Much like the crypto and blockchain space, the DLT legal framework is somewhat dynamic. Recently, updates were initiated to reflect the current state of the blockchain industry and its technology.

Isola points out that this was inherent in the original design of the legislation. “We created what we call the main core principles because we appreciate that you couldn’t box this up in legislation like you can do in insurance or in funds or wealth management or in banking.”

“So we did this on principles which are quite wide. And so, to assist those principles, we issued comprehensive guidance notes. What’s happened between that and today is that the core principles are still relevant, but the guidance notes needed some refreshing and updating because things have moved on.”

An international standard on the horizon

Isola believes that regulatory standards are progressing across different countries. He points to the current movements across the world as governments slowly push past roadblocks and issues. “These things need to develop, and I’m sure they will,’ he says. “So I think the sooner we get there, the better.”

‘I think we’ll we’ll get to the stage where there will be developing international standards like there are in other areas of traditional financial services, and that will benefit the sector enormously.”