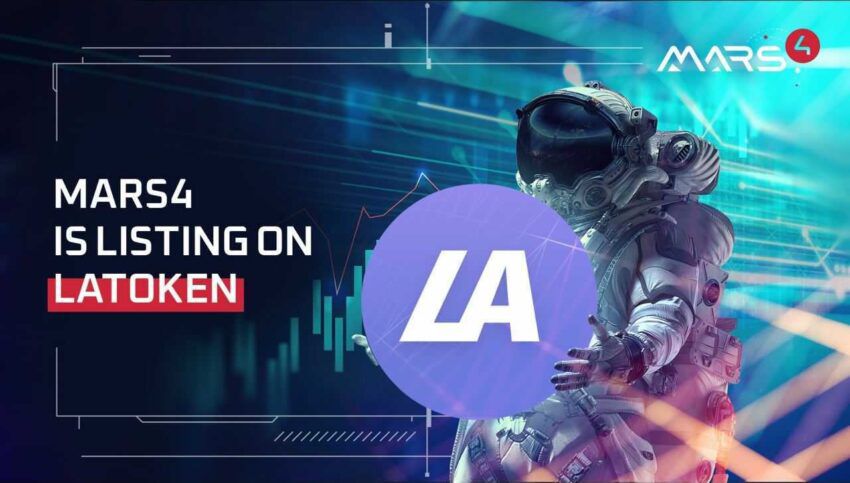 Play to Earn project Mars4 is rapidly rising in popularity, thanks to the recent game demo release. This led to MARS4 dollars getting listed on the LATOKEN Exchange. Mars4 had previously been listed on a number of exchanges. The addition of the LATOKEN exchange gives more flexibility to traders.

Mars4 is a blockchain-based project that aims to bring mankind closer to the Red Planet. While we may not be able to visit the Red Planet in person, we can achieve that online through the Mars4 game – and even make money while doing so.

The Mars4 project was built utilizing two blockchain components: cryptocurrency (MARS4 dollars) and NFTs. Both MARS4 dollars and NFTs will be incorporated into the game to provide the greatest possible experience for players, giving them complete control over their assets and the ability to profit from gaming.

There are two types of NFTs in MARS4: land plots and in-game NFTs. Both of these NFTs generate money.

Land plot NFTs are unique fragments of Mars created using NASA data. The whole surface of Mars was subdivided into smaller areas – 99,888 in total with over half of the NFTs having already been purchased.

Land plots of Mars4 will be utilized as playable zones in the game, allowing you to explore and terraform your territory by creating different structures on Mars.

Soon in-game NFTs will be launched too. These NFTs will be used as tools in the game, allowing holders to earn far more and much more quickly.

The MARS4 dollar is a cryptocurrency designed to support the Mars game. It will be used and earned by players throughout the game, from trading resources to completing quests. The entire Mars4 economy was built using this cryptocurrency.

Your MARS4 dollars can be put to good use already. On SushiSwap, you can stake MARS4 dollars; a new pool on another exchange will be introduced soon.

Mars4 investors will be able to earn MARS4 dollars in a passive manner. They’ll be able to rent out their assets to other players and profit from the community pool.

The community pool is a tool for distributing revenue among the investors – NFTs holders. A percentage of every transaction in the MARS4 ecosystem is sent to the pool. Whether it’s through a sale or an advertising contract – the Mars4 community pool grows.

Landowners vote to open the pool to distribute its contents to the NFTs holders. Having a larger number of NFTs boosts your passive income.

Mars4: The demo is already accessible for landowners

The game is the most significant part of the Mars4 project as it connects all of the elements together.  It’s a 3D player vs environment game in which players strive to remain alive on Mars. Gather materials, trade them, construct stations, and become a part of the metaverse unlike any other.

The completed game will be a multiplayer metaverse in which cooperation improves the chances of survival.

The demo was first released to landowners. This version allows players to learn the game’s fundamental concepts and construct their own Mars station. To mark the game’s launch, the Mars4 team is organizing two competitions: Building Competition and Treasure Hunt. The entire prize pool for these events is 15,606 USD.

As part of the Building, Competition players are encouraged to create innovative structures on Mars. The prize consists of 17 NFT land plots (totaling 9,826 USD) which will be awarded to the winners.

Treasure Hunt is a competition for people who have yet to discover their inner architect. The Mars4 team has concealed four vehicles on the game map. Players who locate all of them and post screenshots on Twitter tagging Mars4 will be eligible to win one of ten NFTs worth 5,780 USD in total.

Landowners are eligible to compete in both contests if they own at least one NFT. Hurry to enter, as many players have already done so!

Mars4 is a play-to-earn project that intends to connect humanity with the Red Planet. At the moment, Mars4 is quickly growing and getting listed on more cryptocurrency exchanges.

Traders will have more options now that MARS4 dollars have been added to LATOKEN. The new game demo release attracted a lot of attention from the crypto community.