On September 18, the Litecoin 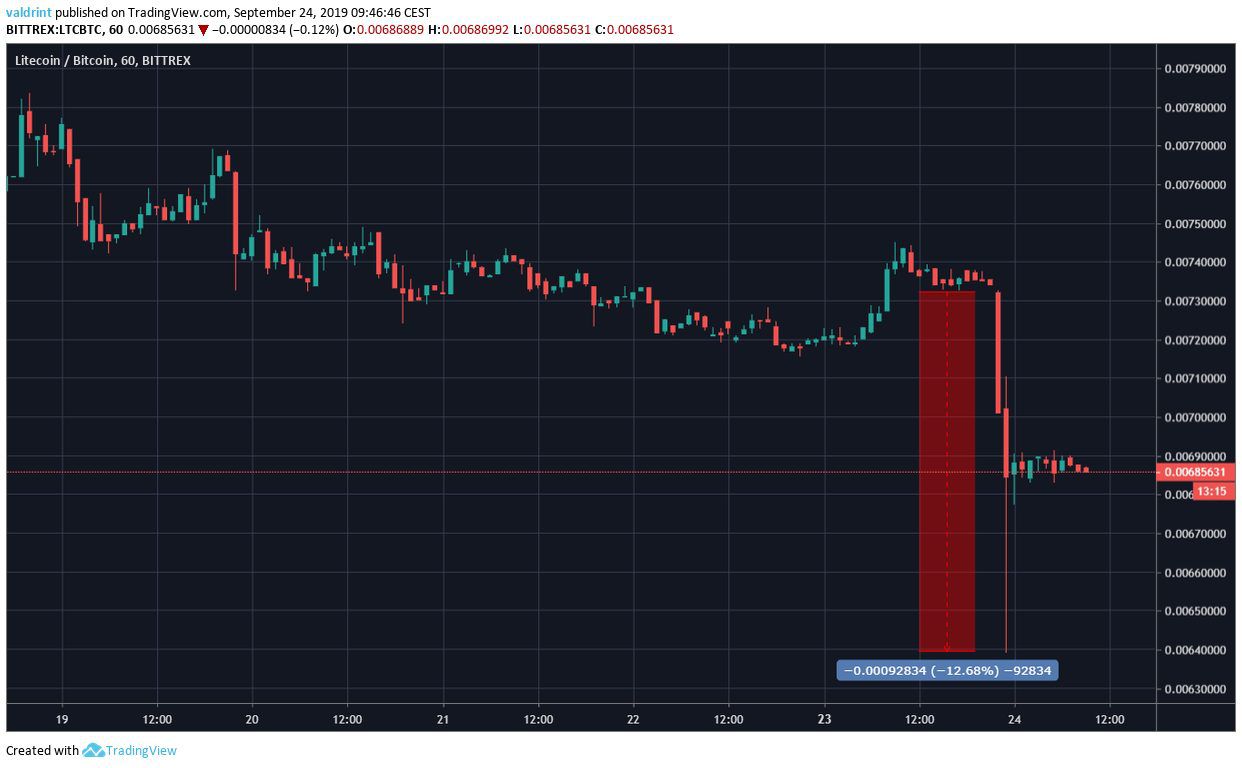 At the time of writing, the Litecoin price was trading at ₿0.0068.

Was this crash the beginning of a long-term downtrend? Keep reading below if you are interested in finding out.

Looking at the six-hour time-frame we can see that LTC has been following an ascending support line since September 5. 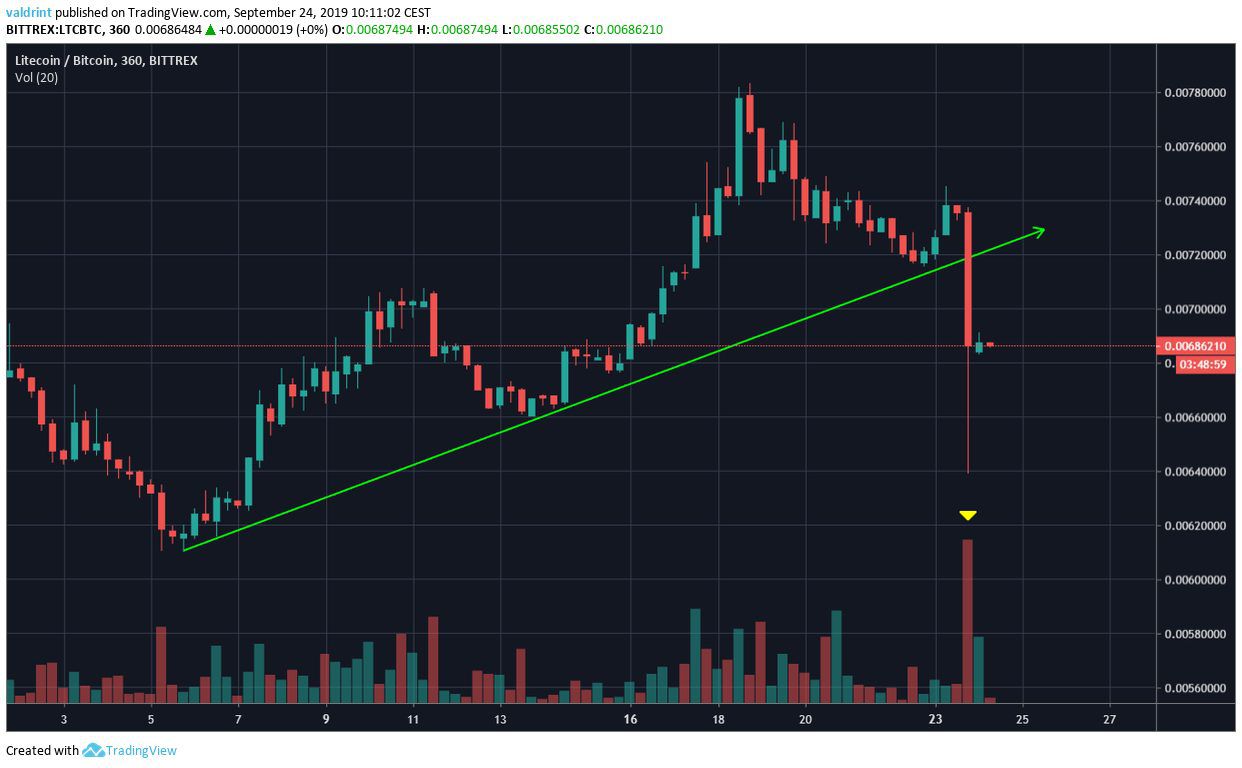 On September 23, the flash crash discussed in the introduction occurred.

This caused LTC to break down below the ascending support line.

The breakdown occurred with very significant volume — increasing its significance.

In order to identify possible reversal areas, we have used a Fibonacci retracement tool measuring the entire upward move. 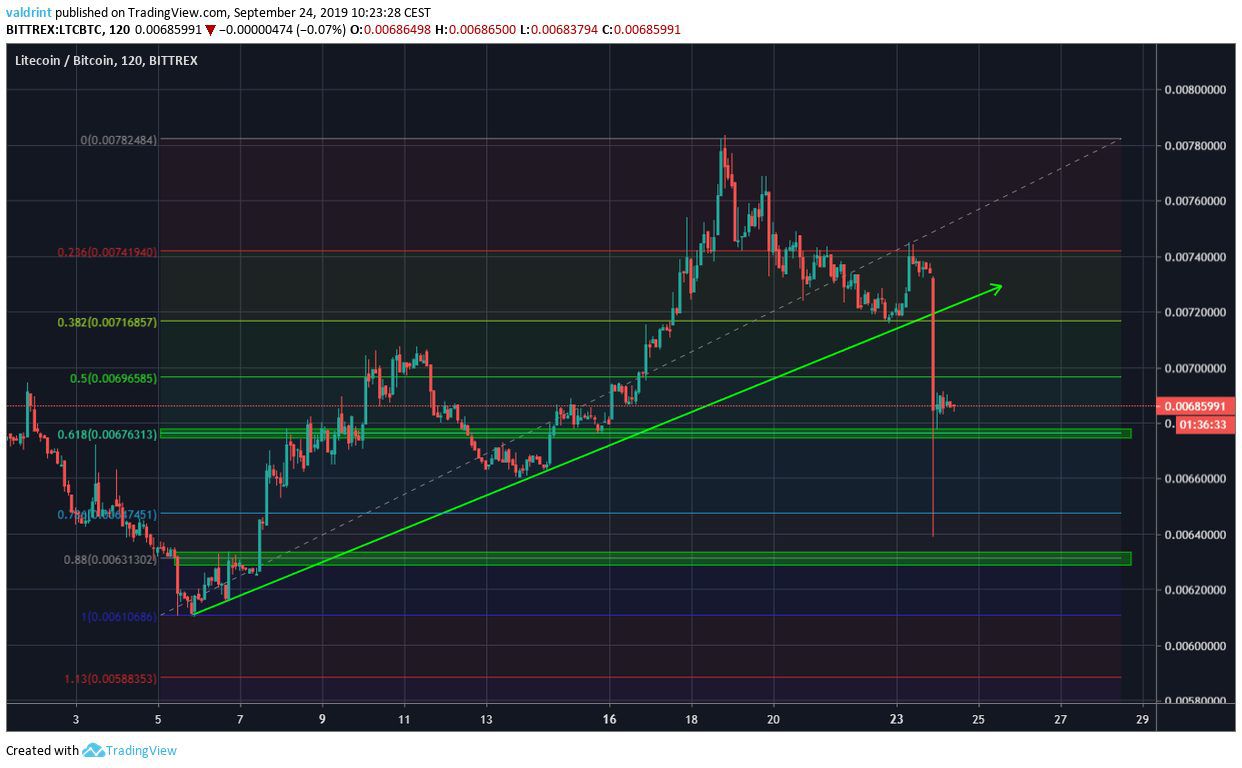 They coincide with previous support levels and the 0.618 and 0.88 fib levels, respectively.

Looking closer at the crash, we can see that the Litecoin price created a very long lower wick once it reached ₿0.0064. 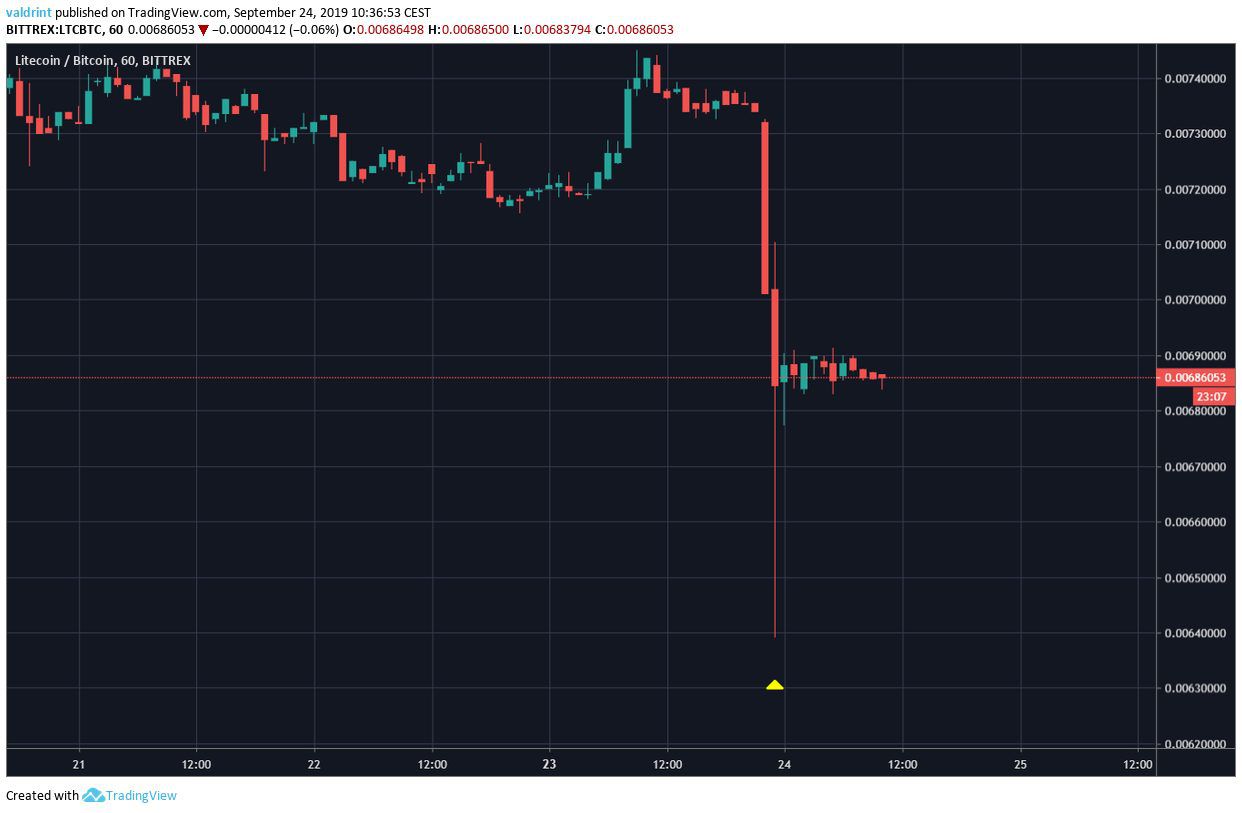 This can either be read as a sign of buying pressure triggering a reversal, or a retracement in response to the prior decrease.

In order to determine that, we have charted the 10-minute chart below: 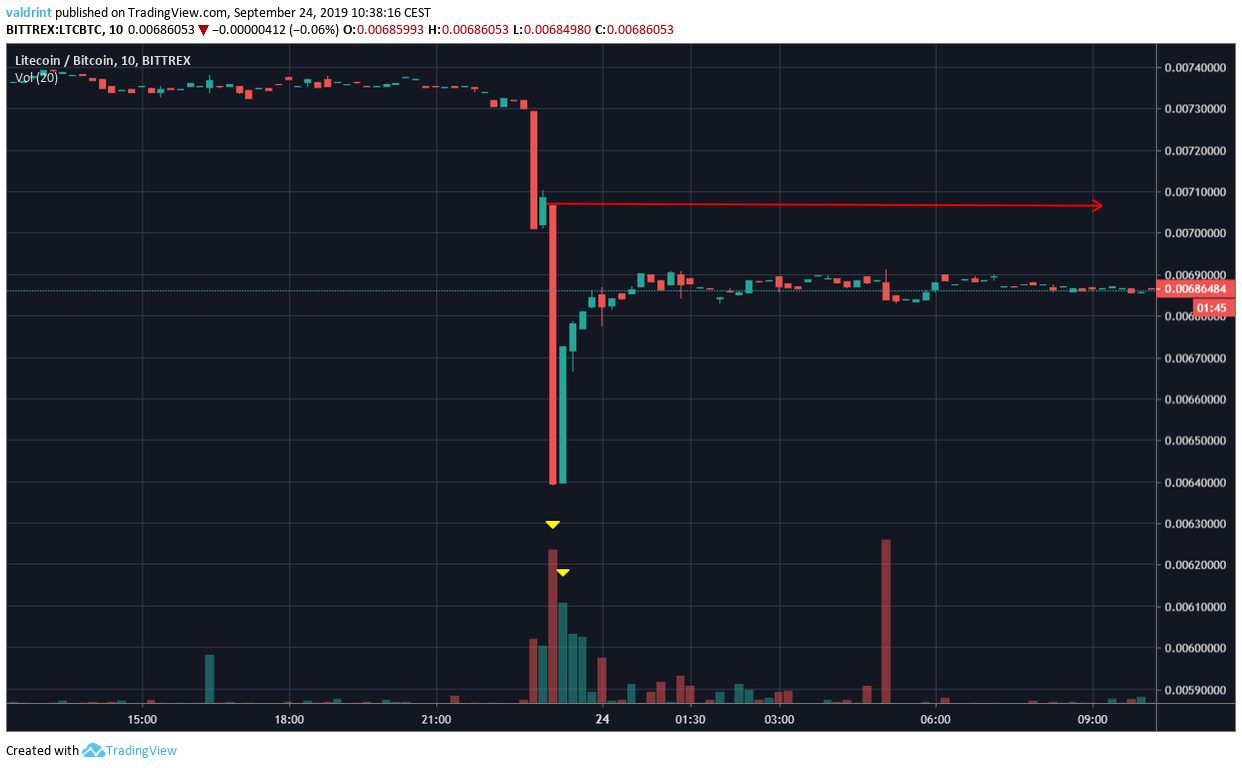 First, we can see that volume was higher during the decrease than the increase.

Additionally, the price has not come close to reaching the opening prices of the decrease.

This makes us believe that this is a retracement in response to the prior move instead of the beginning of an upward move.

An outline of possible future price movement is given below: 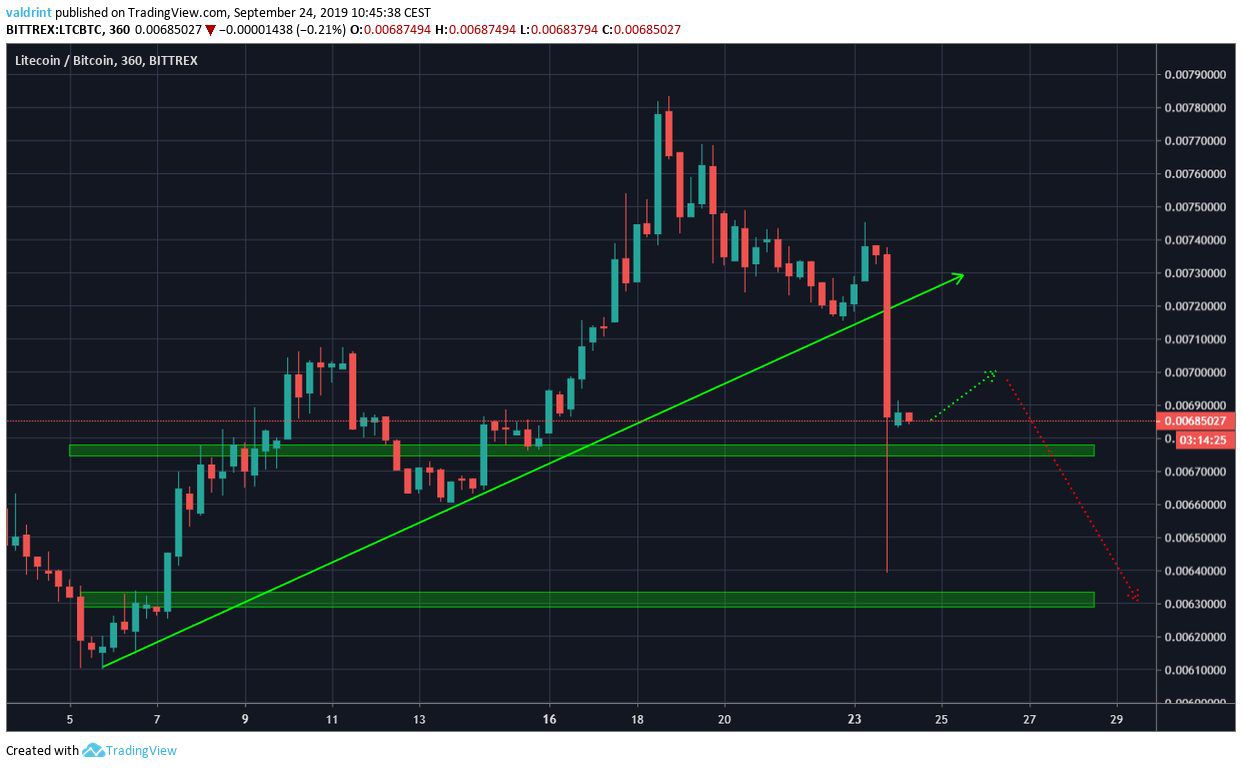 LTC is likely to undergo a slight upward retracement before continuing its downward move and reaching the second support area at ₿0.0063.

While it is possible that LTC retraces higher and validates the previous support line, this currently seems unlikely. 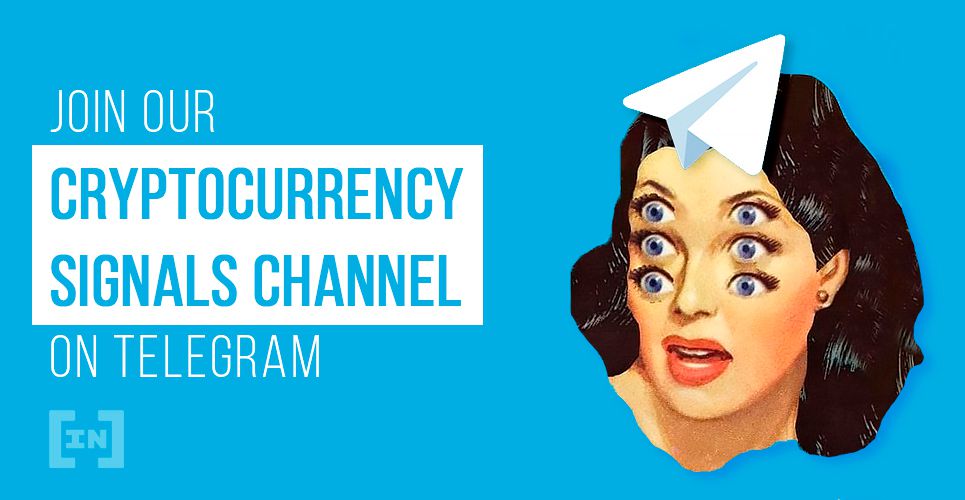 On September 23, LTC suffered a flash crash and broke down below an ascending support line.

According to our analysis, it is likely to continue decreasing and reach the second support area.

The current price position does not allow for the initiation of a profitable trade.

If, however, LTC were to retrace and touch the support line, it may be considered a potential sell near ₿0.007.

Do you think the LTC price will retrace or continue decreasing? Let us know in the comments below.

These 2 Altcoins Could Increase Considerably During April