The year 2020 had several major events occurring for ETH, highlighted by the initiation of phase 0 for the release of Ethereum 2.0.

Unlike 2020, The year 2019 was not kind to Ethereum, particularly to its miners, with the mining revenue decreasing by almost 75% during the year. While the 2018 Ethereum mining revenue was $3.7 billion, it decreased to $935 million in the next year. The decrease is even more stark when looking at the comparison with the revenue of BTC miners. While Ethereum miners made $0.72 for every $1 of BTC miners in 2018, that number dropped to only $0.187 the next year.

Similar to the rest of the market, the Ethereum price decreased rapidly in March 2020. This rapid drop has also caused the fees on the Ethereum network to skyrocket. As BeInCrypto has reported, extreme demand for Ethereum has previously shown the faults of the network in their ability to handle increased demand in a short period of time, as was the case with the Ethereum-Based CryptoKitties game. The recent developments show that the network is not yet ready to facilitate such large scale transactions.

However, during this entire decrease, the Ethereum whales have been accumulating, as is visible by the total holdings of the top-10 wallets with the highest Ethereum holdings, which have been continuously increasing their totals, arriving at a 10-month high of 9.76 million ETH.

While Ethereum has become an important player in the world of decentralized finance, this was also tested severely on March 12, when the ETH price decreased by roughly 30% in only 24 hours. MakerDAO, which is the biggest player in the Ethereum-based DeFI, was even considering an emergency shutdown due to the market collapse.

Nevertheless, ETH has been increasing at a rapid pace since March, having done so by more than 1000% and at the time of writing was trading very close to its all-time high of $1440.

The weekly chart for ETH shows that the price has finally moved above the final Fib retracement resistance (0.85) before it reaches its all-time high resistance area at $1450.

While technical indicators show a considerably overbought rally, there is no weakness yet in the form of bearish divergence that would suggest that ETH has reached a top.

To the contrary, a weekly close above this final resistance area would indicate that ETH is likely heading towards the $1450 resistance area and possibly a new all-time high price. 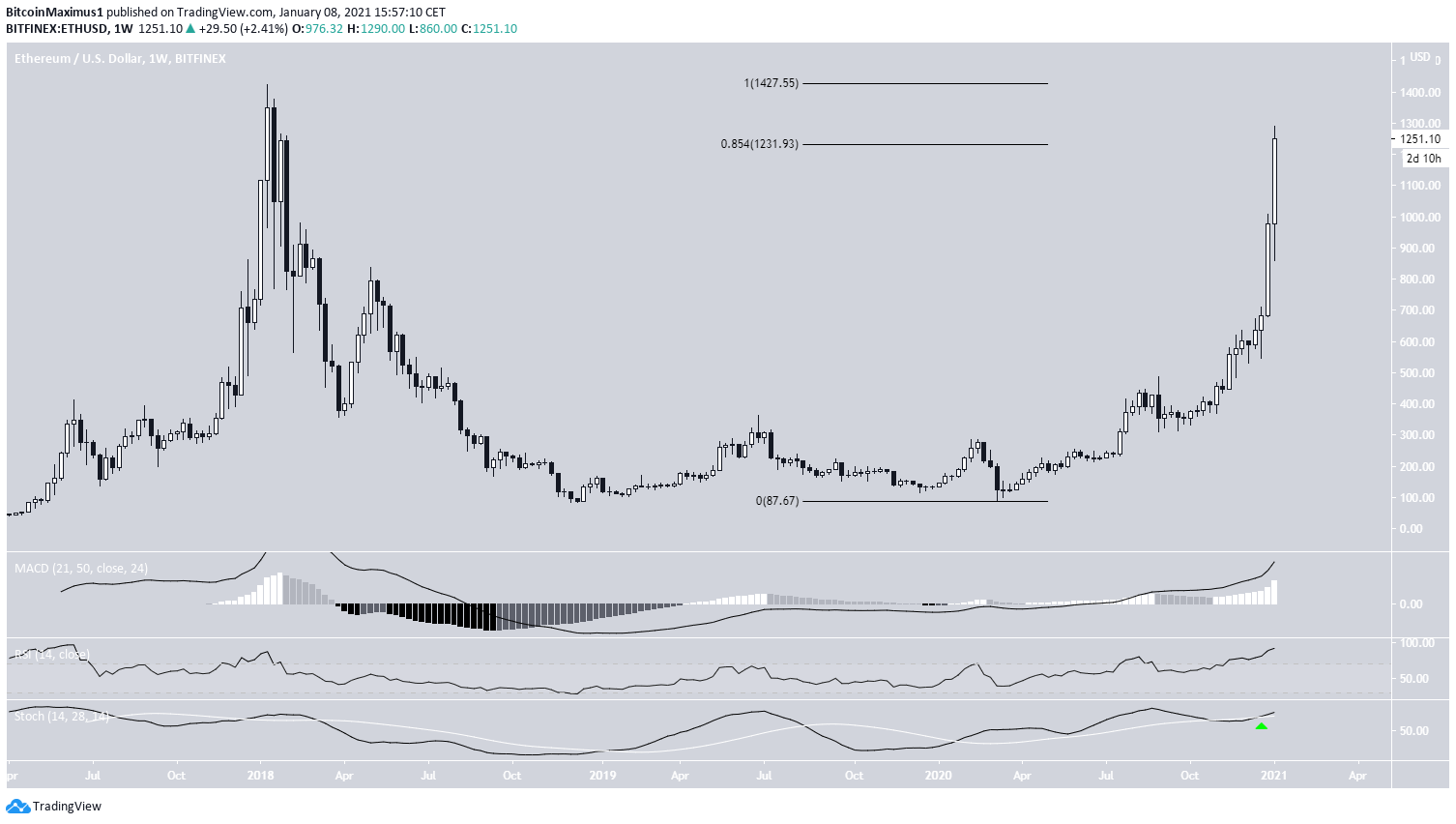 While short-term trading can be stressful, due to the high volatility and numerous movements such as fakeouts that are near impossible to predict, BeInCrypto has created a telegram group to provide daily discussions about recent price movements as well as educational content intended to help traders of every skill level.

Ethereum began to decrease afterwards, decreasing to single digits before the years end. However, the ensuing upward move took it to an all-time high of $1423 on January 13, 2018. The price has been decreasing since, marking a more than two year downward trend.

In the table below, we have outlined three important highs and lows throughout the price’s history, which will be used in order to make a prediction about the price in a future date in time.

In this analysis, we attempt to predict the price at the end of 2020 and 2021, as well as the price five years in advance.

In order to do that, we will begin by seeking to isolate similarities between Ethereum price movements at different points in time. The first thing that stands out when looking at the all-time chart is the three day RSI. Throughout Ethereum’s entire price history, there are only two times that the 3-day RSI has generated bullish divergence.

The first came in December 2016, near the first bottom outlined in the table. The second one transpired over a longer period of time, more specifically from December 2019 to March 2020.

Therefore, the ratio between high and low remains almost identical, being slightly higher than 10 both times, even if the magnitude in absolute terms differs significantly, being more than six times bigger in the 2020 movement.

In addition, the amount of time between the two bottoms in 2016 was 21 days, while the same bottoms measured 86 days in between in 2020. Therefore, the movement was 4 times longer in 2020.

Another similarity comes from the price’s relationship to its 50-week moving average (MA). The two bottoms marked the only two periods in which the price briefly decreased below the 50-week MA.

Finally, the next similarity comes from the price movement alone. Even if the bullish divergence bottoms were different in time period and magnitude, the movement preceding the two lows has been almost identical both in the time period and decrease beginning from the previous high.

Therefore, it is entirely plausible that these bottoms represent similar points in their respective market cycles.

While the rates of increase/decrease were the same, we found out in that the time period between the two bottoms was four times longer in the 2020 movement. Therefore, in order to make a prediction for December 31, 2020, which is 282 days from now, we will find the price 70 days after the December 2015 bottom, and transfer its rate of increase to the current bottom.

The movement since March 2020 has been predicted relatively, since the current price is above the prediction, but a significant drop within the next 10 days could cause ETH to reach it.

While the previously outlined ”price of $2800 by the end of 2021” is still valid, the price movement over the last few months allows us to make an alternate prediction using a similar method.

Therefore, we can makes the assumption that the current movement is 1.5 times slower than that in 2017.

It is worth noting that on this prediction we are attempting to predict the price five years in advance of an asset hat barely has five years of price history, so this long-term prediction is bound to be less accurate than the short-term ones.

To conclude, there are numerous similarities between the current Ethereum bottom and that on December 2016, leading to the possibility that they represent similar points in the price’s respective market cycle.

Therefore, our predictions are made presuming that the price will continue to act in a similar way as it did after the December 2016 bottom.

What do you think of our ETH price prediction in 2019 and our Ethereum forecast for the future? Do you think ETH can recover in 2018? Let us know your thoughts in the comments below!