Is It Time for Ethereum to Reach $150? (ETH Price Prediction Updated March 25)

Share on FacebookShare on Twitter
At BeInCrypto, we offer regular price analyses and predictions of the most popular and relevant cryptoassets. In our Mar 22 analysis of ETH, we predicted that the price will likely increase, touch the resistance line of the triangle and possibly break out. It touched the resistance line on Mar 23, but it has not broken out yet. Click Here to Read More or keep reading below for our most recent price predictions for Ethereum!

Though prices initially rose back to over $140, they were trading near $136 at the time of writing on Mar 25.

Should we expect further drops or will prices finally reach the $150 mark again? 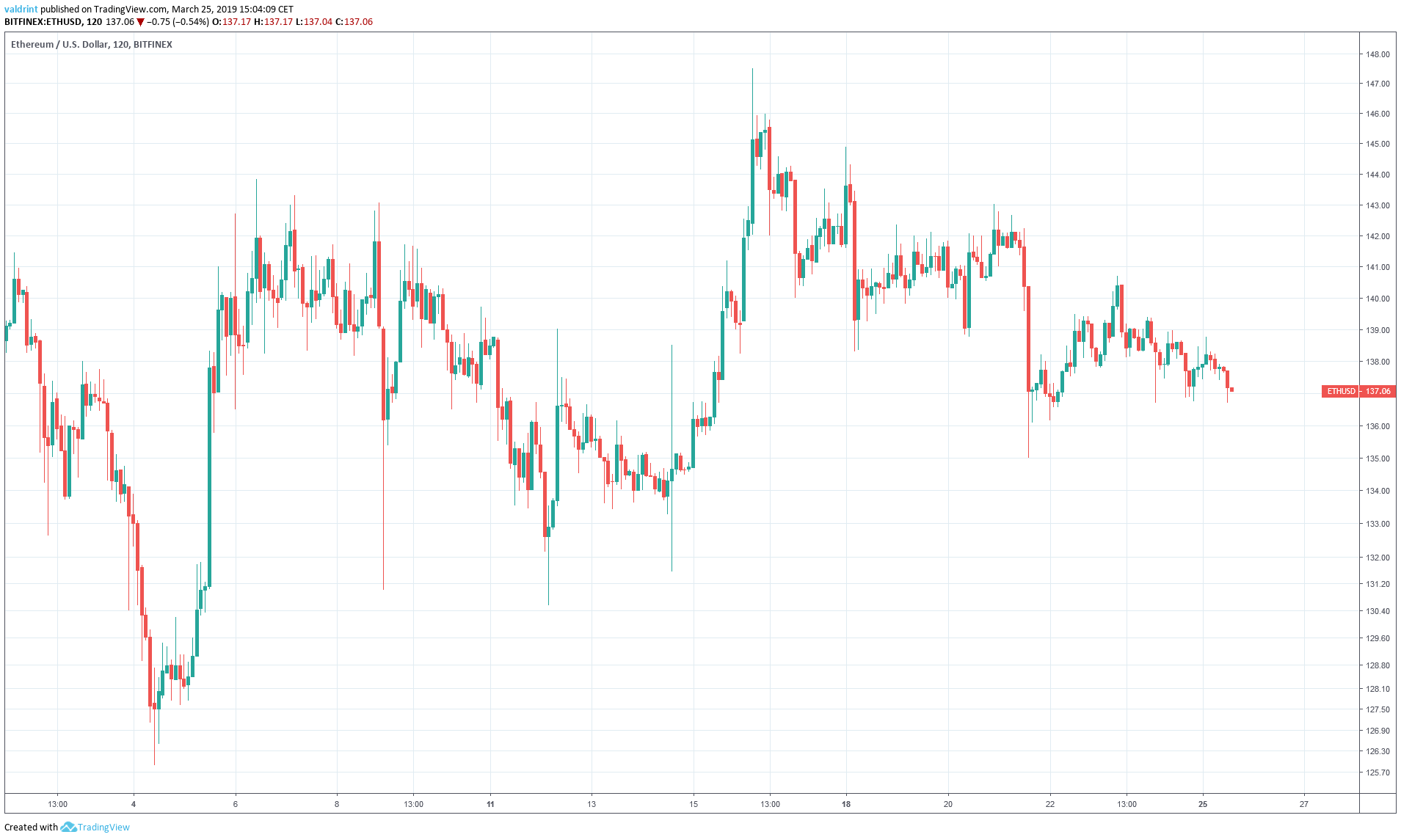 Based on today’s analysis, we predict that the prices of ethers—the native cryptocurrency deployed on the Ethereum network—will increase and eventually break out of the current trading pattern defined below.

Will it reach $150? You’ll have to keep reading to find out.

In order to predict where the price will be heading next, we analyze the price of ETH on Bitfinex was analyzed at two-hour intervals from Mar 4 to Mar 25.

On Mar 4, the price made a low of $125.88. Rapid increases followed. Several market cycles have been completed since, with each low being higher than the previous one. Tracing these lows gives us an ascending support line. 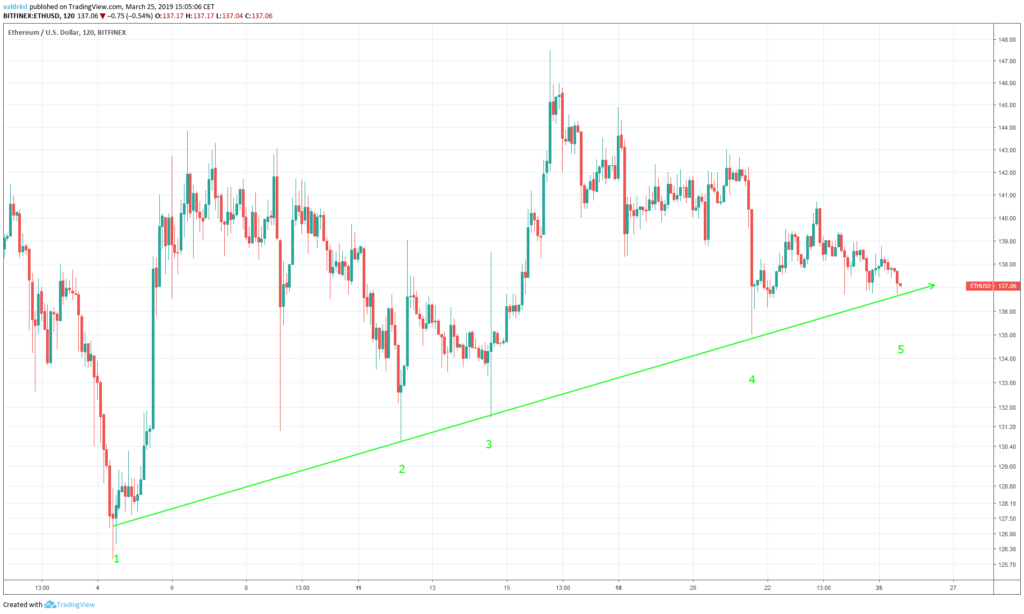 The support line can act as a floor to price, preventing further downward movement. It theoretically traces the lower limits of price movement.

It also measures the rate of growth. Initially, the price increased at a faster rate than predicted by the line but reverted back to the mean on Mar 15.

On Mar 21, there was a second rapid upward movement.  However, price reverted back to the mean on Mar 22 and Mar 24.

It is likely that the price of ETH will keep increasing at the rate suggested by the Mar 4-22 support.

On Mar 16, the price made a high of $147.5. A gradual downward move followed. Several market cycles have been completed and each high has been lower than the previous one. Tracing these highs gives us a descending resistance line. 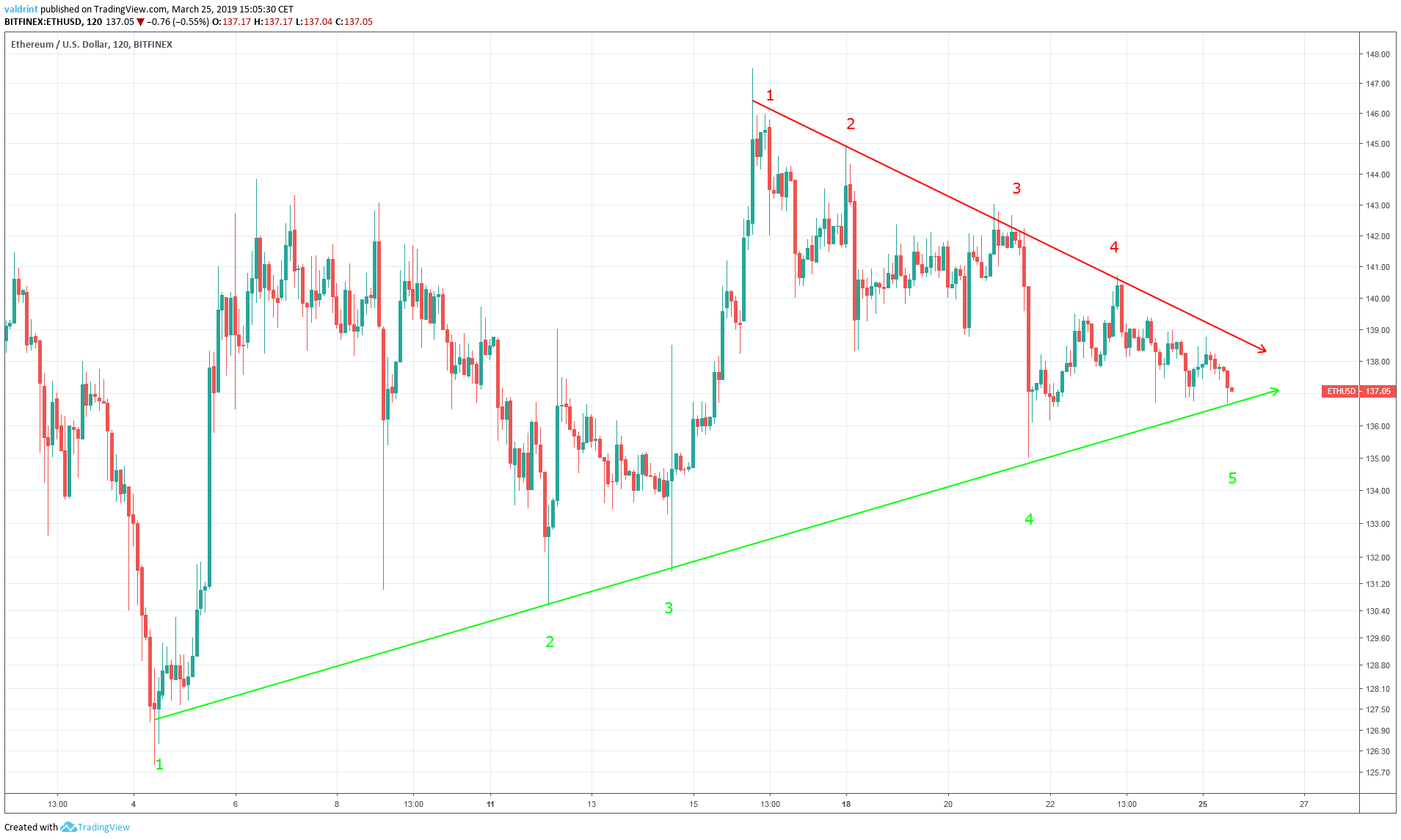 Similar to the support line, the resistance line acts as a ceiling to price, preventing further upward movement.

The support and resistance lines combine to create a symmetrical triangle. This is a netural trading pattern. Price increases and decreases are likely to continue within the triangle’s confines.

However, at the point of convergence between resistance and support, Ethereum will be forced to break out above the resistance or break down below the support.

Following the support, it appears as if a breakout is more likely. Continued gradual price increases should be expected based on this pattern. 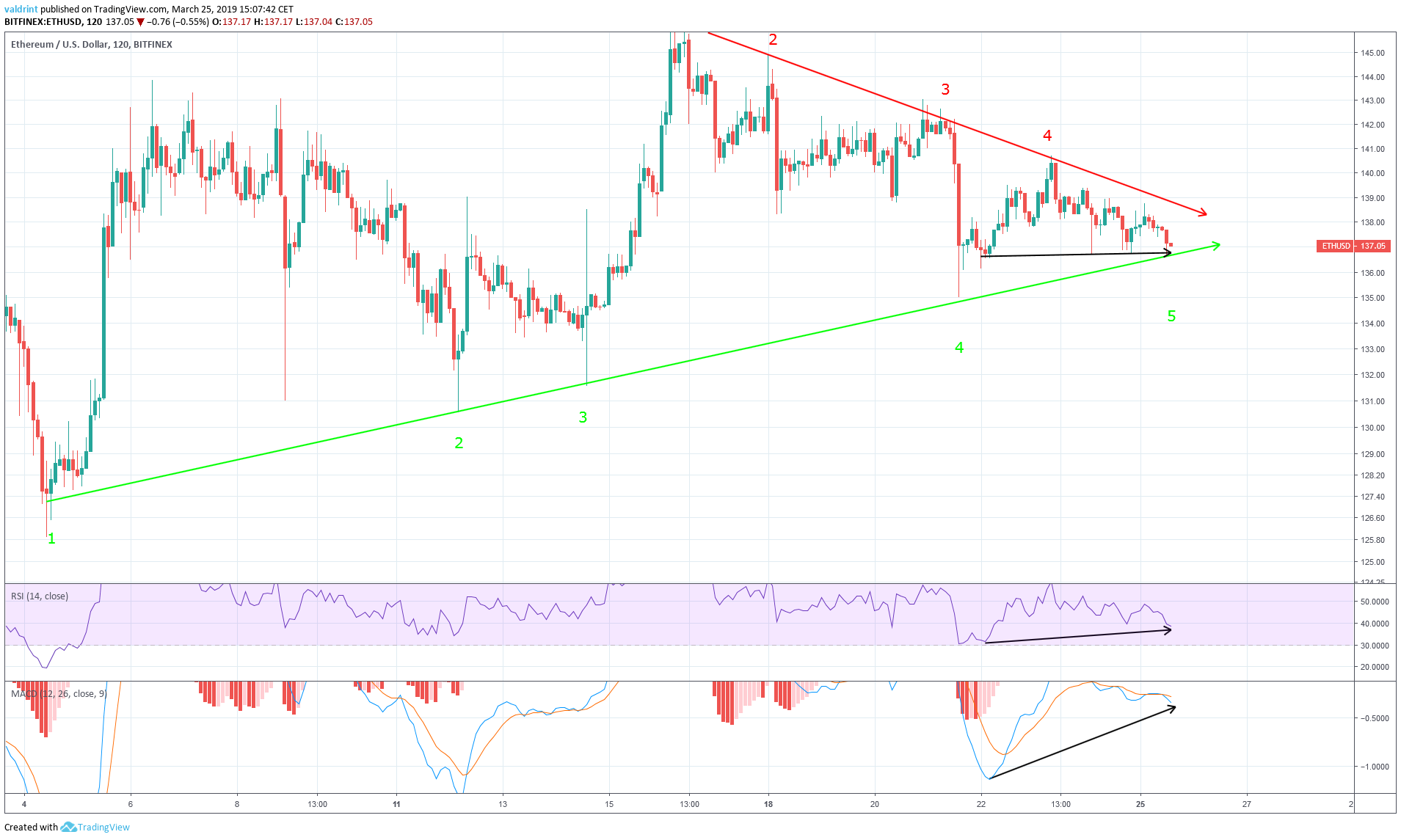 Similarly, the RSI and the MACD made the first low on Mar 22. However, they proceeded to make a higher low on Mar 25. The level of divergence is more pronounced in the MACD.

However, it is not very significant in value and is occurring in a neutral pattern—reducing its validity. Combined with the upward support, price increases, however, still appear mlikely.

Using these indicators, it is likely that the price experiences continued movement towards the resistance line of the triangle and eventually break out. While a breakdown is still possible, we believe it to be unlikely. 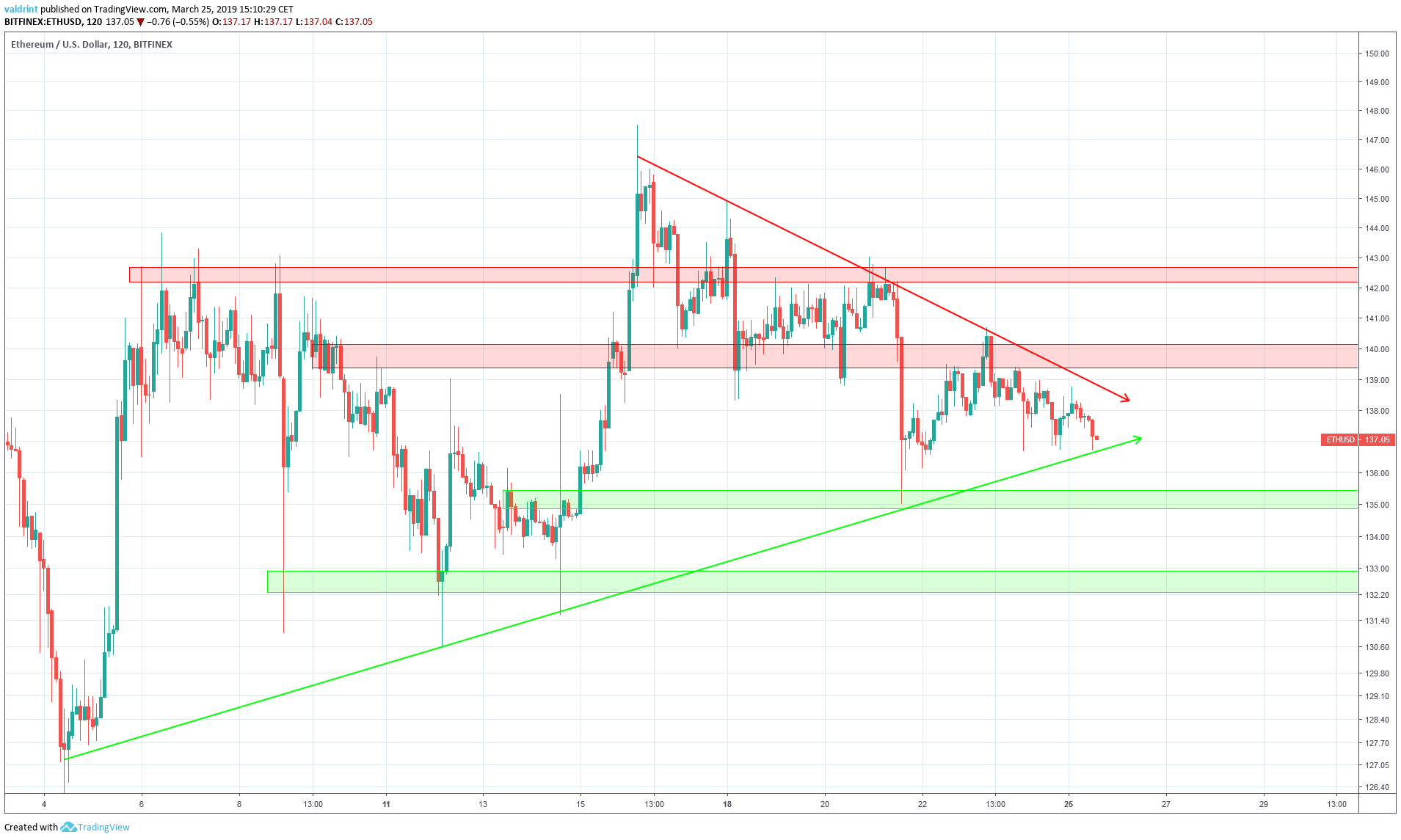 The first resistance area is located near $140, followed by the main resistance area at $145. If the price were to break out of the triangle, these two would provide likely reversal areas. Further price increases or a failed breakout could lead to prices close to $140 soon. However, a confirmed breakout would be required for the price to reach $145.

Based on this analysis, the price of ETH may increase  and touch the resistance line of the triangle. If the price touches the resistance line, this prediction will be partially validated. If it breaks out afterward, it will be fully validated. This prediction would be invalidated by a breakdown below the support line of the triangle.

Do you think ETH will eventually break out of the triangle?  Let us know your thoughts in the comments below.