On January 4, the DASH price broke out above a long-term resistance line. After validating it as support, it has continued moving higher.

Cryptocurrency trader Nico (@CryptoNTez) stated that the DASH price retested the 670,000 satoshi support and has begun another upward move, reaching his first target. In addition, he advised users to update their current stop losses in case the price reverses.

Not perfect but close enough

UCTS 1D & 2D signals together are usually a winner😏

Looking for further continuation, make sure to update your SL!#DASH pic.twitter.com/61xta2hBib

Let’s take a closer look at the DASH price and try to outline its future movement.

On January 4th, the DASH price broke out above the long-term descending resistance line.  We discussed the long-term ramifications for this move in our previous analysis.

Afterward, it returned to validate the line as support and initiated another upward move, which was successful in increasing above the 100-day moving average (MA).

Currently, the price has almost reached the 200-day MA. In addition, volume has been decreasing since the breakout, possibly signaling weakness for the bulls. The 750,000 satoshi area could act as support afterward in the future. 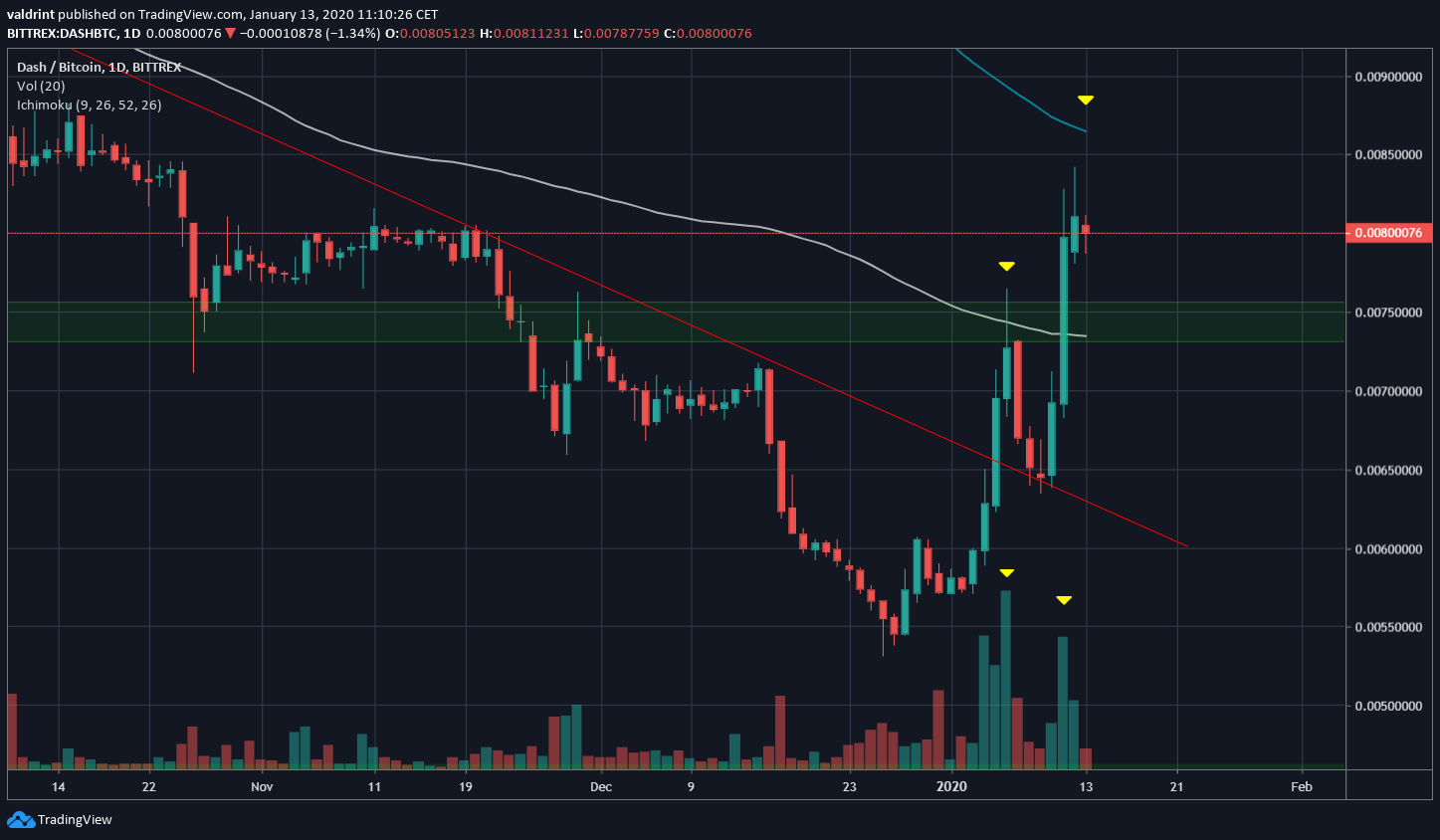 Looking closer at the movement that caused the breakout, we can see it has all the characteristics of a five-wave Elliott formation.

The first upward move was small and transpired with negligible volume. The third wave was the longest and had the highest volume. The fifth wave has the steepest rate of increase, almost becoming parabolic. However, it is also accompanied by decreased volume and bearish divergence in the RSI. The fact that it is ending near the resistance area of 800,000 and the previously mentioned 200-day moving average (MA). only strengthens this belief.

If so, what follows afterward is often an A-B-C correction. 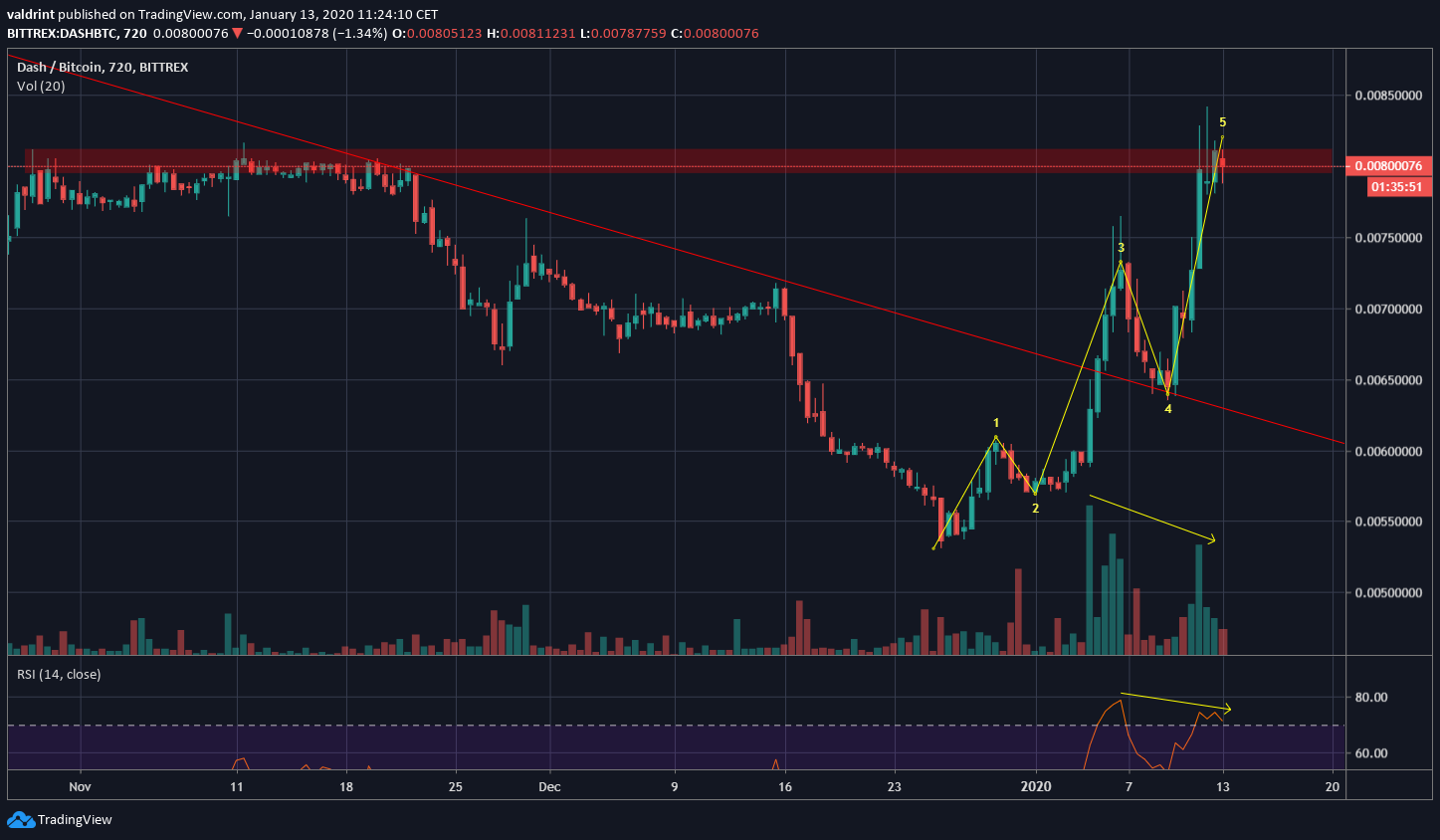 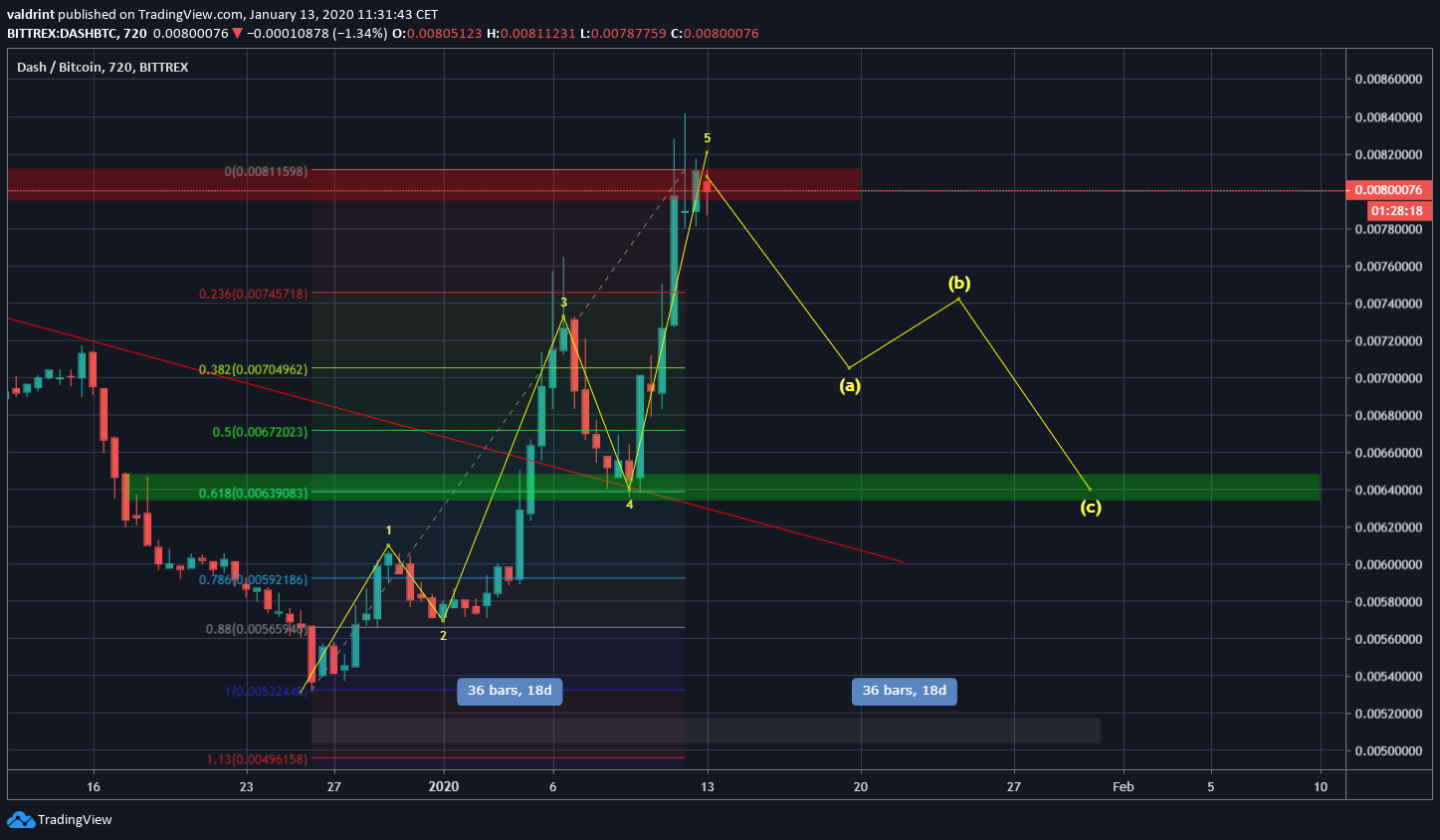 For hypothetical trading purposes, initiating a short trade with an entry at 800,000 satoshis and a stop loss of 851,000 satoshis with a target of 640,000 satoshis will give us a Risk:Reward ratio of 1:3. The target could be reached by the end of January. 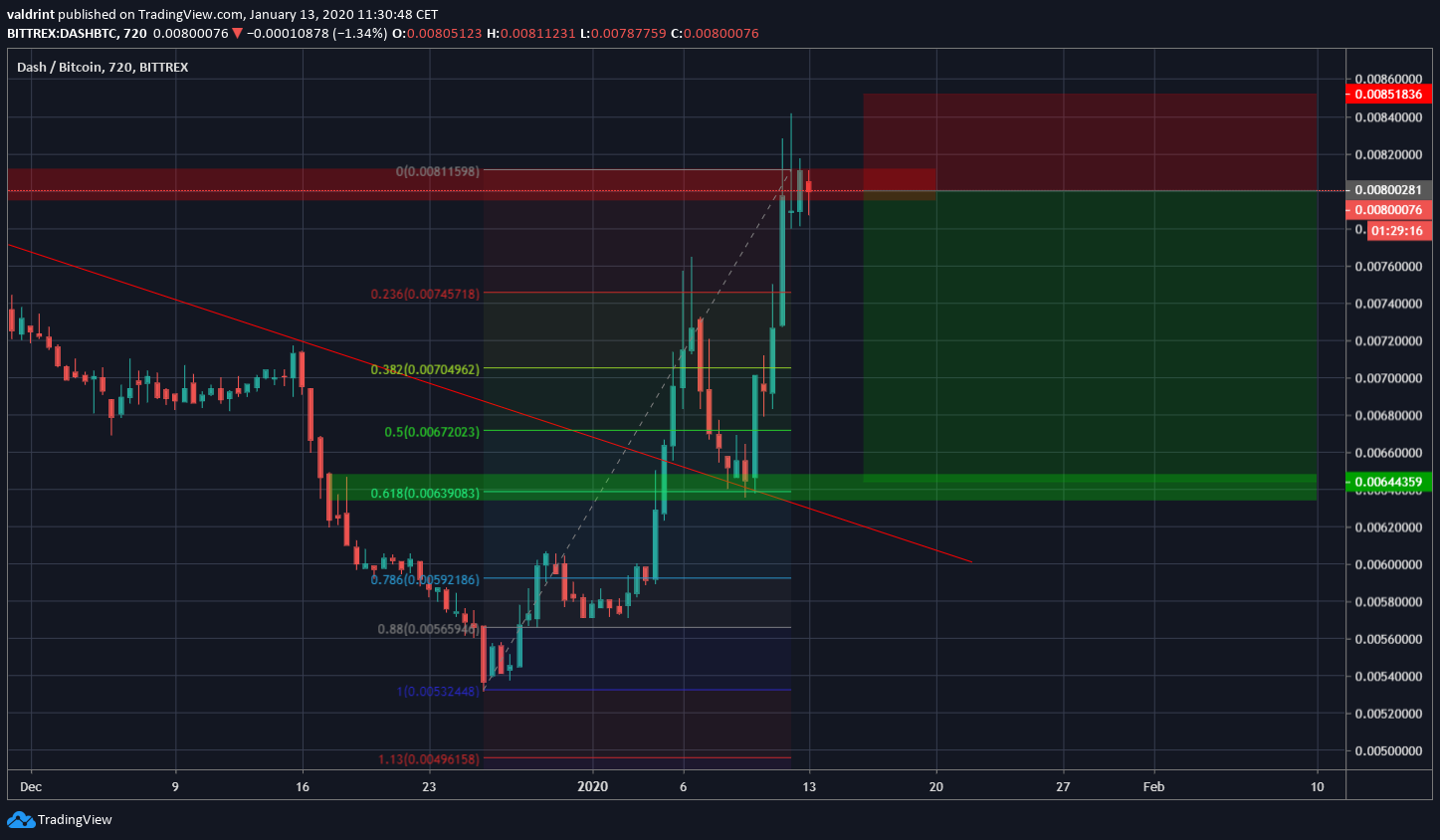 Finally, the tweet warns to “make sure to update your stop losses.” Judging by the position of the parabolic ascending support line this does not seem so straightforward.

Placing a stop loss below 750,000 satoshis seems like the logical play, but this level is above the ascending support line until January 16th. Therefore, it runs the risk of the price triggering the stop loss and moving upwards.

In addition, placing it at 780,000 runs the same risk, however, it locks up roughly 5% more profit, making it a better place to exit the price. 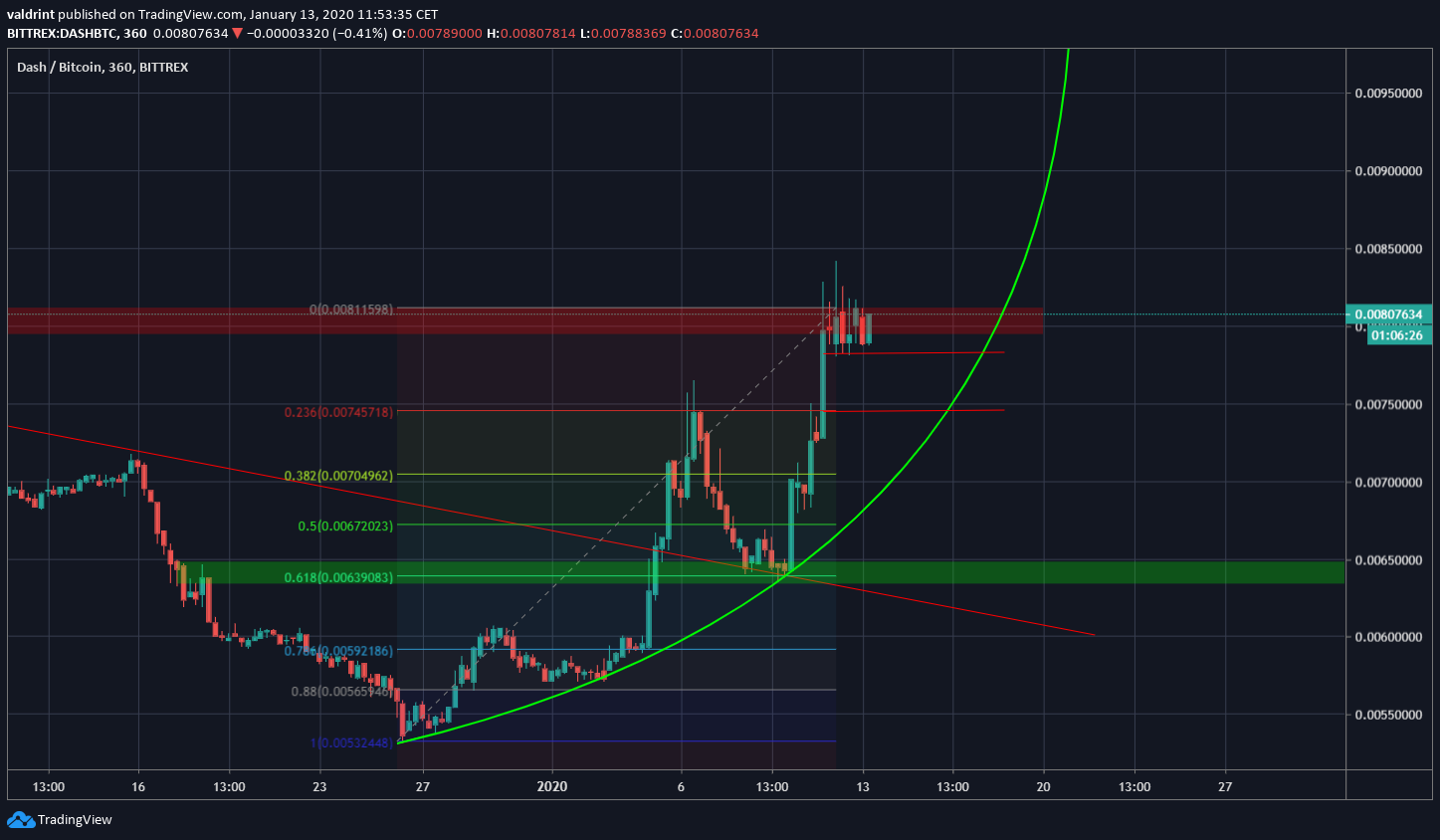 To conclude, the DASH price recently broke out above a long-term descending resistance line. However, it seems to have completed a short-term five-wave Elliot formation. Therefore, a correction awaits before the price continues reaching new highs.