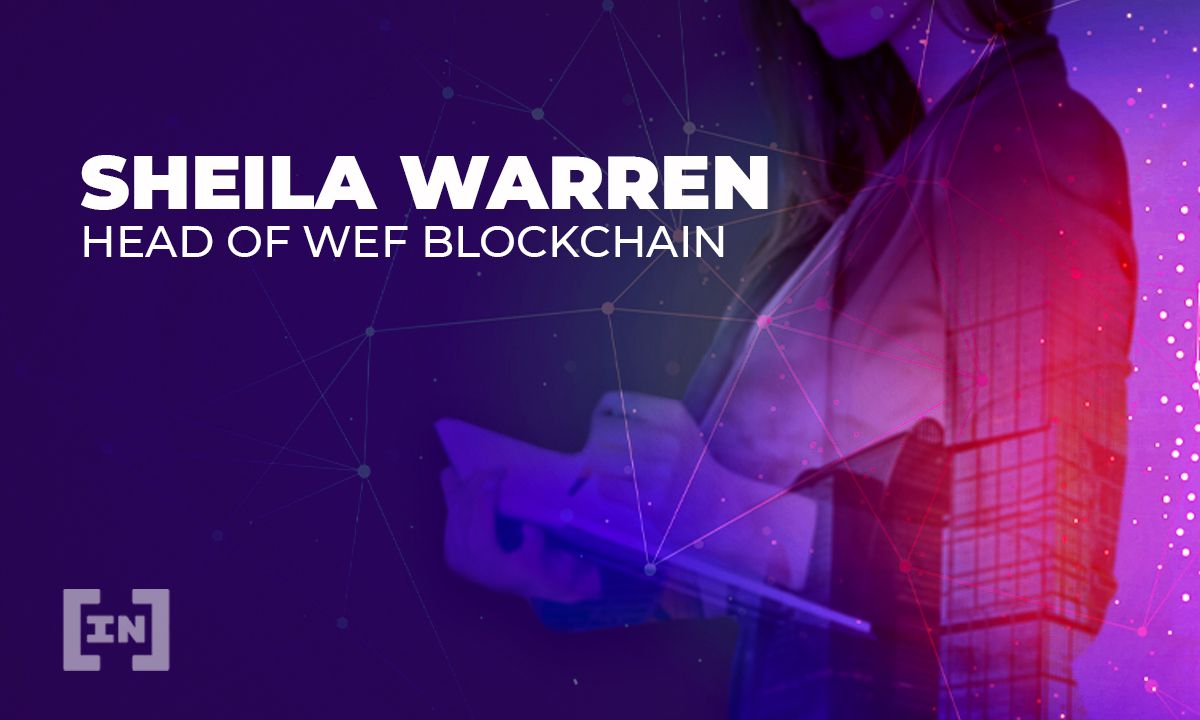 BeinCrypto spoke to Sheila Warren, the Head of Data, Blockchain, and Digital Assets and the Deputy Head of the Centre for the Fourth Industrial Revolution. We wanted to find out how she brings all these stakeholders together and what the future of crypto could look like.

Blockchain and the World Economic Forum

BIC: What is the goal of the World Economic Forum (WEF) blockchain platform?

Sheila Warren: We are a policy and governance-focused institution. So the general theory of the C4IR (Centre for the Fourth Industrial Revolution) is that of policy, regulation, governance.

How do we create more agile methods of regulation that can effectively regulate, accelerate benefits for innovation, but also mitigate some of the risks of technology? So that’s kind of the overarching theme, if you will, of the C4IR.

What we try to do is make sure that we bring together to form and fashion multi-stakeholder communities, public-private sector, third sector, academics, other experts, to really provide a nuanced view of what’s happening in this space.

What I think the most important thing has become for us, and what I’m really proud of is our kind of brand and voice in this space is very much that of what I call pragmatic optimism.

So we are definitely bullish on the tech on crypto over the long term but we’re very practical, and we have no skin in the game. We are one of the very few truly neutral organizations that are opining on things here with regularity and with conviction and with authority.

I think it’s turned out to be extremely important in this space. A lot of what I do, frankly, is trying to cut through the hype. Try to cut through, nonsense, to use a polite word for it, and just try to stay there.

There’s a lot of noise in this space, a lot of froth. That doesn’t mean there’s not also true signal. It doesn’t mean something really exciting, isn’t also happening. Those can both be true.

So we try to kind of carve a straight line forward and I think we’ve been pretty unerring. I think it’s to provide nuance, in a world ecosystem that is not exactly prone to nuance, I would say that’s my fundamental goal.

BIC: What has the biggest challenge been in working on blockchain policy with the WEF?

SW: A lot of people have come to this with black and white views. That’s gotten better. I think over the years, at least in some spaces, I think most people now address bitcoin, for example, with some nuance. But that was not the case.

The first two years I was in this role, it was: Yes or no, good or bad, evil or dark or light. It’s very, very black and white. You see this with NFT’s. Now people are like, “these are great, these are the most important thing that’s happened ever” and other people are like, “this is so dumb, it’s gonna vanish in two seconds.”

So it’s a matter of kind of moving through the fads in this space and saying something here is true, what is that thing? But I think the hardest thing is that there’s so much money to be made.

Therefore, people have very strong agendas that are backing for reasons that aren’t always transparent, that aren’t always obvious. They’re very hard to tease out. Part of our job is to cut a path through all of that and focus on the true signal. So it’s tough.

Crypto, blockchain, and the pandemic

BIC: What impact do you think the pandemic has had on cryptocurrencies and how has people’s response to bitcoin changed?

What you see over a decade in, is that argument doesn’t hold and clearly, there are people using this who are not criminals. What they are using it for is an interesting question and it can be hotly debated. But, it hasn’t vanished or anything, it’s gotten stronger.

But I think fundamentally, there’s more nuance in the bitcoin conversation. There are still people who are like, “y’all are idiots, bitcoin is a disaster’ and people who are like “bitcoin forever, it’s tattooed on every part of my body.”

I mean, you still have those extreme points of view, those are never going to go away. Those people have tremendous skin in the game on one side or the other, or they’re just passionate.

So what’s changed, I think, is that the pandemic has really forced a reckoning with inequality. That there’s just no getting around it. You can’t pretend anymore, that everything is working extremely, extremely well.

Now, I’m not one of those [who say] everything is broken, burn it all down, it’s a disaster. But I’m also like, there is room for significant improvement here. I think crypto as a general matter has pushed that conversation forward in parallel with the pandemic.

So it’s not that people are using crypto more, it’s that people have had time to be very creative with technology. In part because a lot of people that are able to build or have that skill have been stuck at home and they’re just working like crazy.

I think we accelerated the space, like three years in a year period, because there were just there were fewer distractions in a way.

So I think that’s the reason you’re seeing some nuance from some of the incumbent or existing players is because you can’t dismiss this space anymore.

BIC: You’re interested in technology for financial inclusion, will this be more likely through CBDC’s, bitcoin or stablecoins?

SW: I’ll give you an answer that you may not be what you’re looking for, but it’s going to be the one that pays the most attention to solving that problem. That’s it, all of them have the potential to do it. It’s a matter of which community thinks that this is an important question to resolve.

So I don’t even want to opine on what those things are. Because they really do vary depending on if you’re a CBDC, depends on your economy or thinking transactionally there are so many design questions.

We are not going to solve anything to do with financial inclusion if we are not focusing at a minimum on technical literacy, financial numeracy and literacy, and educating people on what can happen here.

Now, I think we’ve seen some really exciting experiments happen with financial inclusion in certain parts of the world, that has demonstrated in my mind that potential is real, this is not a theoretical possibility. It is very real.

But these experiments are not easy. They’re very complicated. As I say, all over the place, I think it’s really important for us to acknowledge flat out that there are elements around financial inclusion or parts that problem space that cannot be solved by technology, period, like there’s no technology that can solve some of these problems.

BIC: CBDC’s, will they create a better or different financial system or just as a new way to hold up the status quo in the next digital era?

SW: I’m going to pose what I think is a rhetorical question, which is, what do we think the motivations of a central bank would be to issue CBDC?

Look at that politically, because even though in some countries, central banks are distinct from the political establishment, in some countries they are not. In any event, there is always a particular point of view that is very steeped in the culture of that country, politics aside, and there are culturally dominant modalities around engagement with money that are really powerful.

So we get into it on my podcast, like, what are the cultural culturally dominant narratives around money? And how do those play out in terms of what we’re seeing in the digital currency space?

When you answer those questions, then you have a good sense of the response to your question about the status quo versus new avenues.

Bringing public and private interests together

BIC: How do you manage to bring or bring all these players to work together on the work that you’re doing?

SW: I do think this is the beauty of the forum. I do think the forum has 50 years of history of bringing together stakeholders in extraordinarily complicated situations to create dialogue. I think that is one of the things that form does extremely well.

I really want to go around, listen to a lot of different people, form my own opinions on what I think is the forum’s role in this space, which was not clear. It was part of my job to figure it out.