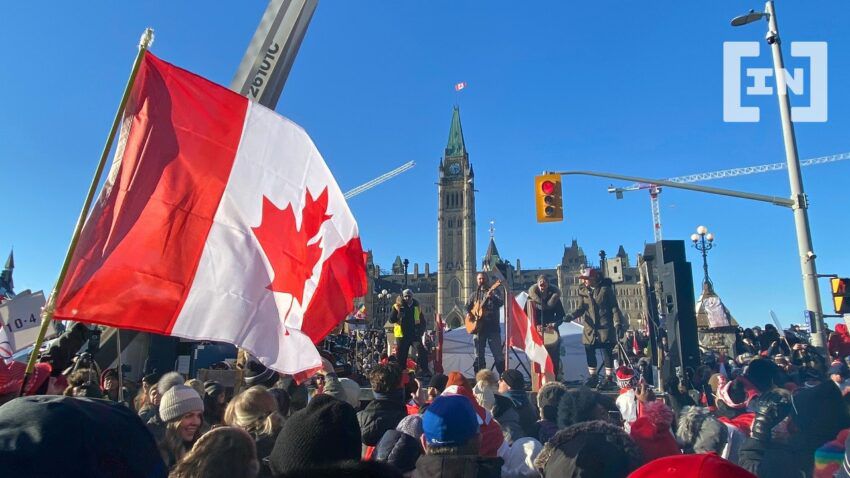 Canadians are protecting their financial sovereignty. In a move planned in advance, Canadians have begun pulling all of their money out of bank accounts. This seems to be a natural reaction to the situation; the government has threatened to freeze bank accounts without the need for a court order.

The money move was noticed by James Melville, an economic journalist from the United Kingdom. On his Twitter feed, he posted a graph showing the massive flow of money that has been withdrawn from Canadian banks.

Canada is currently going through a series of protests caused by the mandatory COVID-19 vaccine scheme. Citizens are making social and economic demands as well.

The high point of the protests came a couple of days ago. Trudeau and other officials announced that they may freeze the bank accounts of people who are obstructing the streets.

However, this is not the most worrying thing. Worse is the plan to add detainees to a ‘misconduct’ file. Once on it, they will be banned from accessing certain types of employment, as well as being deemed as ‘terrorists.’ This surprisingly places Canada into territory where the concept of democracy seems to be in question.

Canadians: Bitcoin as an alternative?

According to social networks, many Canadians are exchanging their money for Bitcoin. They assume this can protect them against a possible the freezing of their accounts by the government. This is a spectacular use-case for Bitcoin, thanks to one of its most precious characteristics: it can’t be confiscated.

Due to its design and operation, Bitcoin is a powerful financial tool of true individual economic sovereignty, where no government, company, or institution can control or centralize its operation.

Accumulating 51% of the Bitcoin network is practically impossible. And therein lies one of the most precious guarantees of the most revolutionary virtual asset in our history. And that is why, in the industry, the “Bitcoin fix this” phrase is repeated a lot. It is a phrase that seeks to exemplify the immense use cases of the cryptocurrency.

Canada has a generally solid economy, with a population that does not need to use cryptocurrencies to protect against inflationary phenomena, like in Latin America. However, in the face of an eventual individual financial blockade, it will be Bitcoin and other cryptocurrencies, which will be an effective mechanism to overcome this.

But is it worth asking, will the Trudeau government allow it? Or will they legislate to prohibit the use of cryptocurrencies in the country as soon as possible? BeInCrypto will follow developments very closely.

Got something to say about Canadians and their money or anything else? Write to us or join the discussion in our Telegram channel.

Ana Ojeda Caracas is a Venezuelan Lawyer Specialist in Blockchain and crypto-assets. She is the CEO of LegalRocks Lawyers, the first Venezuelan firm specialized in this sector. Ana has more than 5 years of experience in: International Regulatory Framework, Fintech, Defi, Blockchain and Crypto-assets. She is currently working as Legal and Financial Advisor to several fintech companies inside and outside Venezuela.