BUY NOW (BTC) has surged over the last few days with a high of nearly $8400 reached on May 16. Litecoin

BUY NOW (BCH) have followed suit along with several other altcoins.

In this continuing analysis of BTC, LTC, and BCH, we examine their current long-term and short-term trading patterns and compare their technical indicators. This allows us to generate possible trade setups.

Our major findings are summarized in the conclusion where the winner of this analysis is selected based on future price potential.

You can read our previous analysis of BTC, BCH, and LTC here.

On Apr 3, the price of BTC/USD reached a high of $5335.5 and a low of $4842. Resistance and support lines are traced from this date to generate the ascending channel outlined in the graph below:

The daily candles have been characterized by long upper wicks, indicating that there is selling pressure in the market.

Furthermore, the current daily candle is bearish with both a long upper and lower wick. It is worth keeping an eye on how the price closes today. A close below $7800 would create a bearish engulfing candle and possibly initiate a reversal.

The price of LTC/USD, however, has been following an ascending support line since making lows of $53.4 on Mar 12.

The increase intensified on Apr 2 and the price reached a high of $99.4 on Apr 3. After reaching similar levels on Apr 6, LTC initiated a gradual descent. The price fell throughout the rest of the month and validated the support line on May 1.

Thus far in May, the price has been on an uptrend. A high of $106.98 was reached on May 16. Price movements are shown in the graph below:

The price has since fallen below $100. Since the beginning of the support line, it has increased by over 80% at the time of writing.

Similar to LTC, the price of BCH/USD has been following an ascending support line since Dec 18, 2018 when a low of $85.2 was reached.

A gradual decrease lasted until Apr 2019. Within the first few days of the month, the price spiked to over $350. and then fell slightly throughout the month. At the beginning of May, price began rising again and has cine surpassed the $400 mark.

Currently, BCH is trading inside the ascending channel outlined below:

At the time of writing, the price was trading at $420.

While trading inside the channel, the price has increased by a massive 387%

However, these patterns alone are not sufficient to predict future price movements. In order to do that, we need to take a look at each of these coins within a shorter time-frame alongside relevant technical indicators.

On May 12, the price reached a high of $7448.0. A gradual decrease brought it to a low of $6880.0 the next day. It has been trading inside the ascending channel outlined below:

If the breakdown was legitimate, a reversal may have already been initiated. This could indicate that severe price drops may occur in the short-term.

In order to assess the validity of the breakdown, the price of BTC is analyzed at one-hour intervals alongside volume:

We believe it is likely that it will reach the support area near $7650 in the near future.

At the current time, we do not see any profitable trade setups for BTC until the price reaches our support area.

Price then spiked and broke out of the ascending channel outlined in the graph below on May 15: 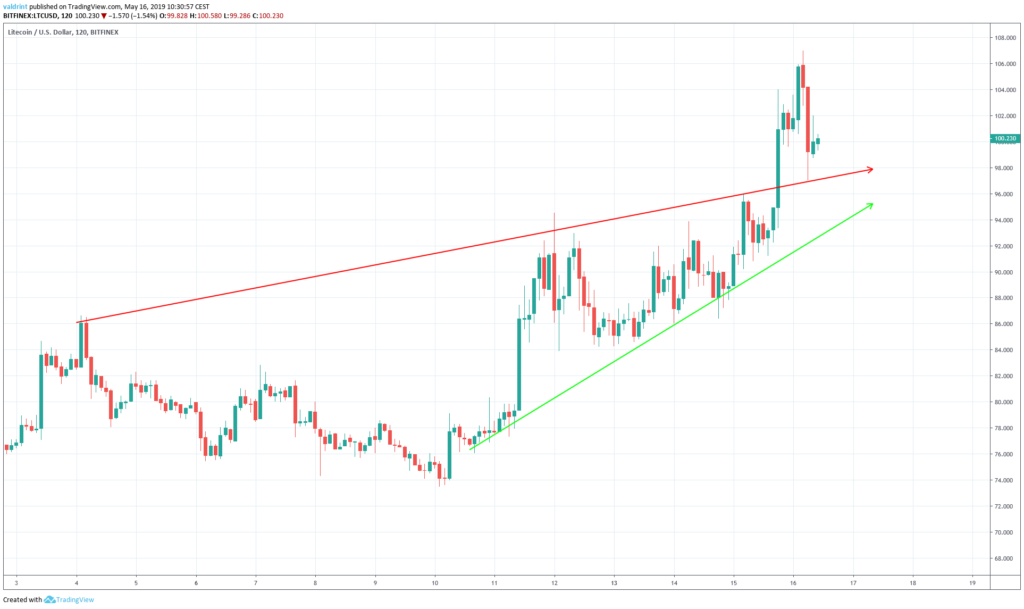 The next day, LTC reached a high of $106.9 and then dropped to touch the resistance line. If the price continues falling, then May 15’s break out may be considered false.

To better determine the validity of the breakdown and predict future fluctuations, we analyze the price of LTC at two-hour intervals alongside volume and the RSI in the graph below:

Similar to BTC, we can see that the breakout occurred with above-average volume.  However, a bearish divergence is developing the RSI. This divergence is also present in longer timeframes.

Therefore, these two indicators are in conflict. The volume suggests that the breakout was legitimate while the bearish divergence suggests the opposite.

Therefore, we are unable to initiate a trade setup. Our previous short was unsuccessful and the stop loss of less than 5% was triggered.

An Ascending Channel For Bitcoin Cash

The resistance and support lines of the channel have both been touched four times.

In order to predict future movement, we have outlined the four-hour price of BCH/USD alongside the RSI and the MACD below:

In the short term, we believe that the price will continue falling toward the support line of the channel.

Due to the fact that the price is trading in the middle of the channel, we cannot initiate a short trade setup.

Our previous short was unsuccessful and the stop loss of 7% was triggered.

To conclude, LTC and Bitcoin BCH are both following ascending support lines. However, LTC is not following any resistance lines, while BCH is trading inside an ascending channel.

BTC recently broke out of its trading pattern and is not currently following a trading structure, though a new trading pattern may be forming. It has reached the major resistance area near $8300-$8500.

Furthermore, LTC recently broke out from its trading pattern, while BTC broke down. All three have developed bearish divergence. However, due to recent surges in price, we cannot rule out further increases.

To conclude, we believe that LTC  faces the best prospects for the near future, due to the fact that it recently broke out from its pattern and is not currently following any resistance lines.

Conversely, BCH is trading inside a gradually increasing pattern, while BTC has broken down.

No viable trade setups were identified.

Do you think the price of Litecoin will continue to increase? Will BTC continue its breakdown? Where will the price of BCH go? Let us know in the comments below.