BUY NOW (BCH) were struggling for price gains. Furthermore, A triple top pattern has formed for BTC while LTC is exhibiting a head and shoulders pattern. Both are bearish.

While BCH is free from these bearish patterns, it has exhibited long-term bearish divergence. Thus, we believe each of these three coins may in the near future.

How low will they go? You’ll have to keep reading to find out!

A Triple Top for Bitcoin?

Since then, BTC/USD has been trading inside the ascending triangle outlined in the graph below:

While the triangle is a bullish pattern, it is possible that the price has made a triple top—a bearish pattern. This means that we have two conflicting trends. Price may rise and breakout from the trading pattern or drop toward the support line.

We are unable to determine which is more likely based on the trends alone.

Thus, the price of BTC is analyzed at four-hour intervals alongside the RSI and the MACD. We pay special attention to the possible triple top pattern we outlined above. 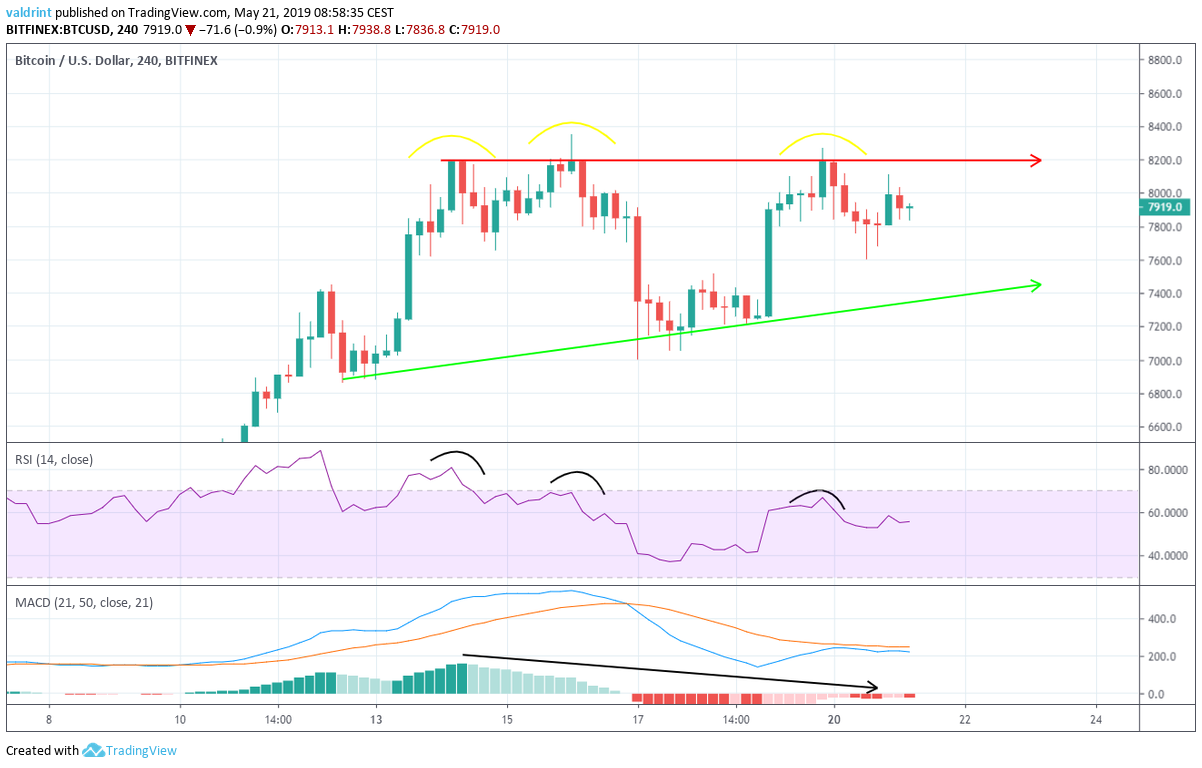 Similarly, the RSI and the MACD reached the first high on May 14. However, they have proceeded to generate lower values since.

Thus, bearish divergence has developed in both the  RSI and MACD. Combined with the triple top pattern, these indicators suggest that BTC is poised to fall toward the support line. A breakout appears unlikely.

A Look at Litecoin

Tracing these lows gives us the ascending support line outlined in the graph below:

The price is not following any resistance lines. However, it a head and shoulder pattern has appeared.

While the head emerged on May 16 when a high of $108 was reached, the first shoulder emerged four days prior while the second appeared four days later. They are marked by highs near $96 on May 12 and 20. Furthermore, the ascending support line appears to be acting as a neckline.

To better determine future price fluctuations for LTC, the price is analyzed at daily intervals alongside the RSI and the MACD below: 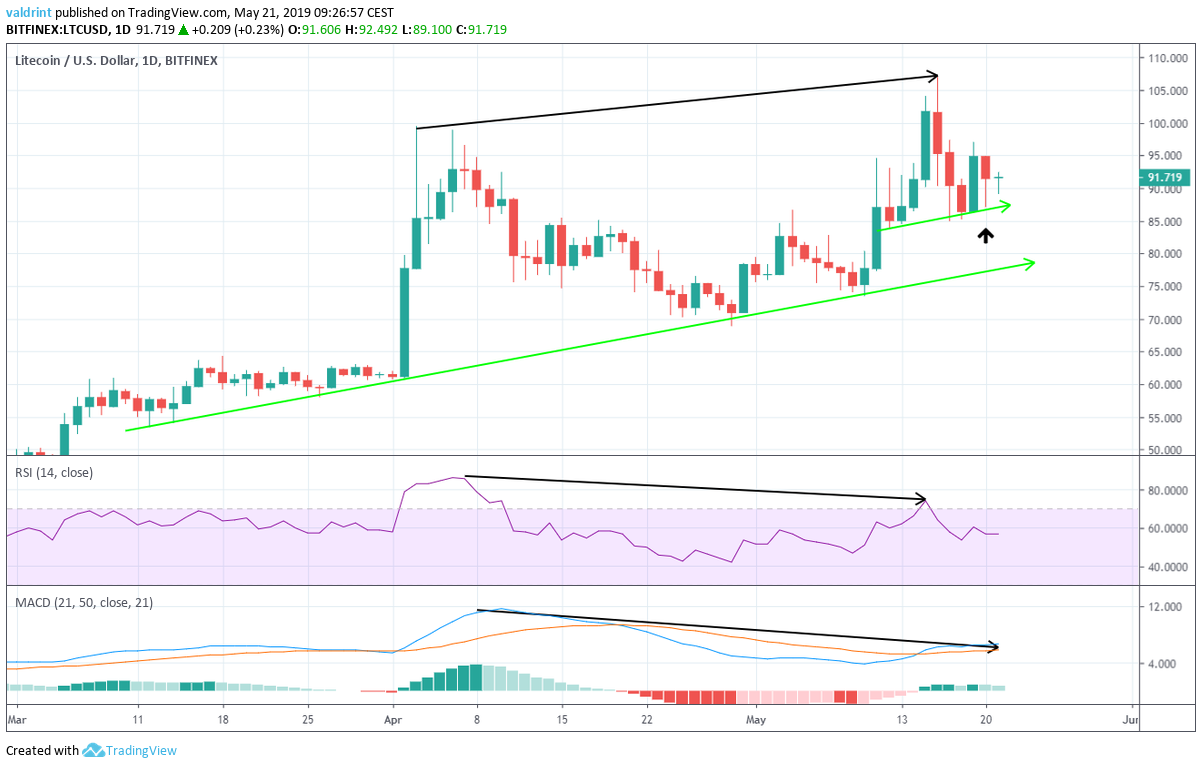 As with BTC, bearish divergence has developed in the RSI and MACD. LTC may soon face price losses.

“We believe that the head and shoulder pattern will be completed. We are likely to see the price breakdown from the first support line and reach the second one near $80.”

However, yesterday’s candle was a hammer. This can be a bullish signal. A close above $95 would likely initiate a short-term reversal. We do not believe this to be likely, but it is worth keeping an eye on.

Price movements are outlined in the graph below:

Currently, BCH appears poised to fall toward the support line of the channel. Nonetheless, a breakout remains possible.

Close To Reaching a Top?

To better assess the possibility of a breakout, the price of BCH is analyzed at daily intervals alongside the RSI and the MACD below: 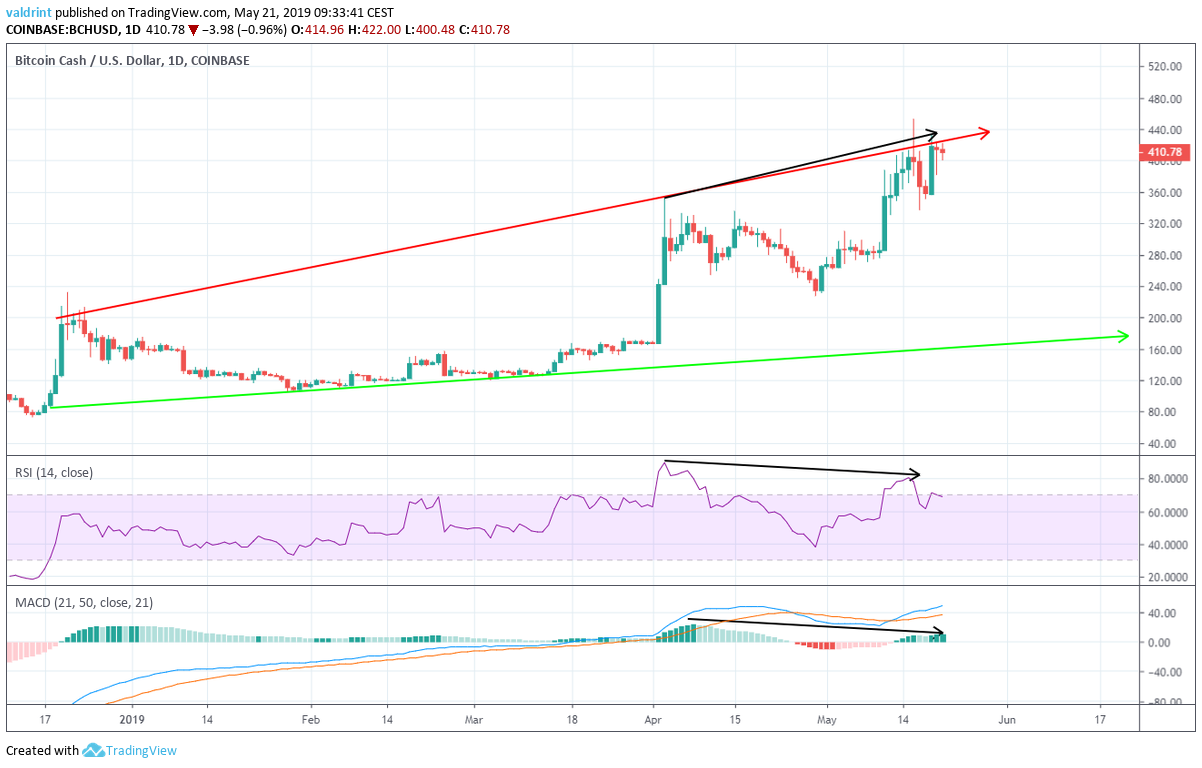 BCH  has been trading inside a long-term ascending broadening wedge, which is a bearish pattern. In addition, BCH has developed bearish divergence in the RSI and MACD like BTC and LTC.

It appears that BCH will drop towards the support line of the wedge. A breakdown is possible but not yet certain.

To conclude, BTC and LTC have generated a distinct bearish pattern. Where BTC has generated a triple top, LTC has formed its own head and shoulders. Neither of these has emerged for BCH.

Additionally, all three have created bearish divergence in the RSI and the MACD. For BTC and LTC, this appeared in the short term while BCH’s divergence appeared in a longer time frame.

Thus, price losses are likely forthcoming for each. However, due to the ambiguity of BCH’s pattern and its smaller fluctuations within the triangle, we believe it will experience lower percentile losses than Bitcoin.

Do you think the BTC and LTC will complete their bearish patterns? Will BCH drop towards the support line of the channel? Let us know in the comments below.