In this continuing analysis of BTC, LTC, and BCH, we examine their trading patterns and compare their technical indicators. Our major findings are summarized in the conclusion where the winner of this analysis is selected based on future price potential.

You can read our previous analysis of BTC, BCH, and LTC here.

Bitcoin in an Ascending Channel

Since then, BTC/USD has been trading inside the ascending channel outlined in the graph below:

The support and resistance lines of the channel have both been touched three times. While inside this channel, the price has increased by 16.5%.

Candlesticks with values above $8200 have been characterized by long upper wicks, indicating that there is selling pressure in the market. At the time of writing, the price was trading close to the resistance line.

The price of BTC is analyzed at six-hour intervals alongside the RSI and the MACD:

Similarly, the RSI and the MACD reached the first high on May 14. However, they have proceeded to generate lower values since. This is known as bearish divergence and often precedes price decreases. The use of these indicators suggests that the price will decrease towards the support line of the channel.

Tracing these lows gives us the ascending support line outlined in the graph below:

The price is not following any resistance lines. However, it seems as if it is creating a head and shoulder pattern. Highs near $96 on May 12 and 20 generated the shoulders while the head is generated from the May 16 high of $108.

This is a bearish pattern. Further price decreases toward the support line appear likely.

The price of LTC is analyzed at daily intervals alongside the RSI and the MACD below: 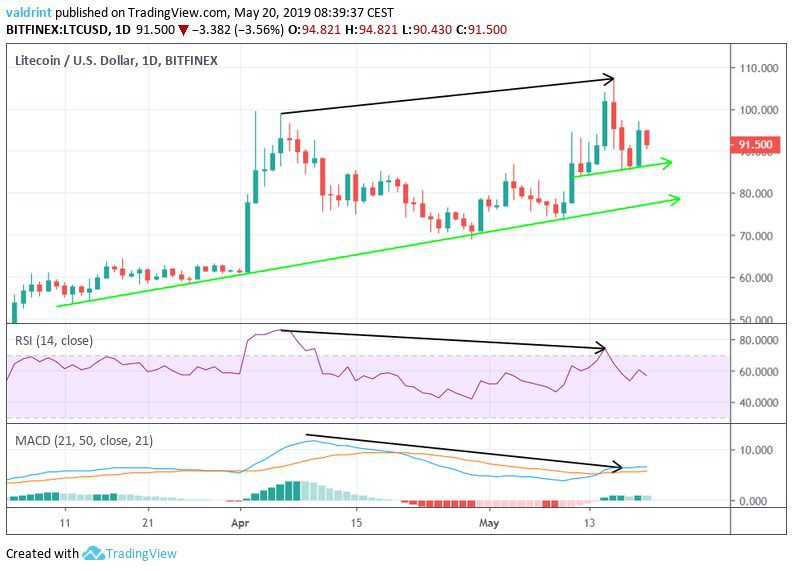 On Apr 3, the price made a high of $99.4. A gradual decrease was followed by an increase. On May 16, it reached a higher high of $106.3. Similarly, the RSI and the MACD made the first high on Apr 4. However, they have continued to generate lower values since.

As with BTC, we see bearish divergence. Thus, both coins might experience price decreases in the near future.

In terms of LTC, we believe that the head and shoulder pattern will be completed. We are likely to see the price breakdown from the first support line and reach the second one near $80.

Price movements are outlined in the graph below:

While trading inside the channel, the price has increased by 21.71%.

At the time of writing, it is trading near $400, slightly below the resistance line.

The price of BCH is analyzed alongside the RSI and the MACD below:

Similarly, the RSI and the MACD reached the first high on May 14. However, they have continued to generate lower values since. Like BTC and LTC, BCH is experiencing bearish divergence.

Thus, we believe that the price will fall towards the support line of the channel.

To conclude, BTC and BCH are trading inside ascending channels while LTC is following an ascending support line.

LTC is not following any apparent resistance lines. Thus, no trading pattern could be traced. However, LTC has generated ahead and shoulders pattern.

All three have created bearish divergence in the RSI and the MACD. Price losses are likely forthcoming for each.

However, due to the proximity of the support line and fluctuations within the channel, we believe these decreases will be smaller in percentage terms for Bitcoin.

Do you think the price of Litecoin will breakdown? Will BTC and BCH drop towards the support line of the channel? Let us know in the comments below.