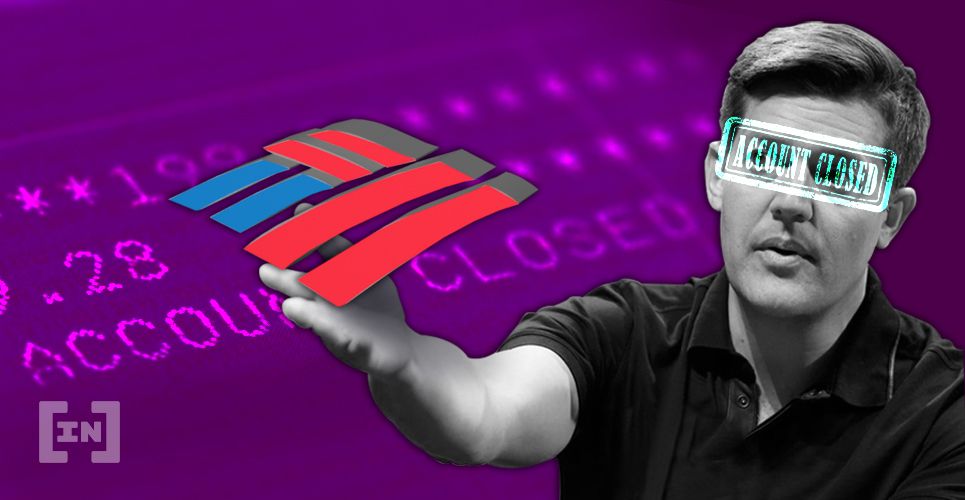 Prominent Venture Capitalist, Roelof Botha, has tweeted that the Bank of America has closed his account with no explanation and on very short notice. With such censorship control as this, Bitcoin and digital assets continue to stand as an alluring alternative.

Botha, a Sequoia Capital Partner and former Chief Financial Officer of PayPal tweeted that after having been a customer for 20 years, America’s second-largest banking institution, the Bank of America, has closed his account with no explanation. This comes at a time where a censorship-free banking alternative exists in the form of Bitcoin and other cryptocurrencies.

After being a customer of @BankofAmerica for 20 years, I received this notice today that they decided to fire me as their customer! With absolutely no explanation…. pic.twitter.com/IJu3peiIWX

Several prominent names in the cryptocurrency space chimed in with their thoughts, pointing to the existence of Bitcoin as a direct answer to unexplained closures. Vinny Lingham, a South African entrepreneur and co-founder of the Civic project, also responded to Botha’s tweet, asking if “[Botha] bought any Bitcoin.”

Did you buy any Bitcoin?

As a partner at Sequoia Capital, Botha sits on the board of several companies, including Evernote, Mahalo, Square, Tumblr, Unity, and Whisper, and was previously on the board of YouTube.

Botha is in charge of U.S. operations for Sequoia and was involved in the firm’s investment in YouTube, Instagram, and Square. He was ranked 18 on the Forbes Midas List, which ranks business people in technology and life science venture capital.

Institutional Investments are Pouring into Bitcoin

Bitcoin and cryptocurrencies are increasingly being viewed as a solid alternative to traditional assets. Bitcoin is seen as an attractive alternative, especially for millennials, which @Rhythmtrader on Twitter pointed out in a newsletter, saying:

“When it comes down to this “Great Wealth Transfer” of Boomers to Millennials, we know one thing for sure, Bitcoin is positioned as a vehicle for the storage of newly acquired wealth. Millennials have demonstrated a strong trend of embracing the digital age with open arms while at the same time turning their backs towards the traditional financial system.”

Institutional investment in digital assets has experienced a marked rise in 2019, with Grayscale investments reporting a 300% increase in investment in Q3 2019. Initially a retail phenomenon, more banks and VC investments have entered the cryptocurrency market since 2018.