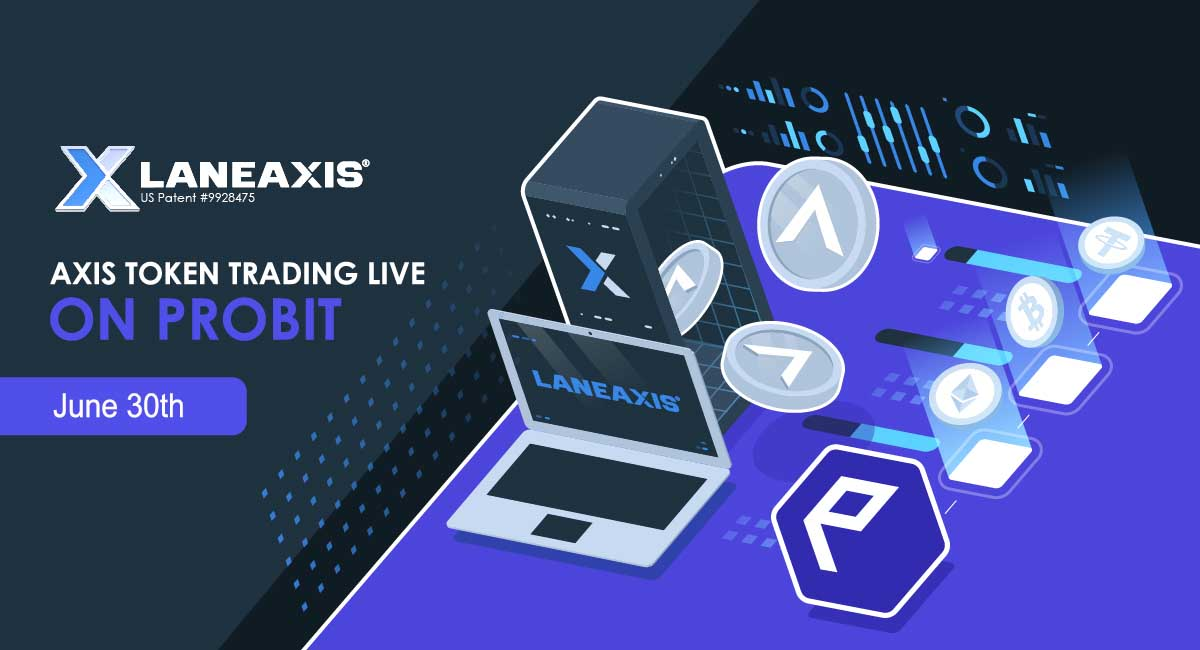 Newport Beach, CA- LaneAxis is taking another giant leap forward in its mission to transform transportation via a blockchain-backed Brokerless Direct Freight Network. On June 30, the AXIS Utility Token will make its trading debut on one of the largest and most well-regarded centralized crypto-asset exchanges: ProBit.

“This is a major milestone in our evolution as a transportation data giant,” says Rick Burnett, LaneAxis Founder & CEO.

“The AXIS Utility Token is the ‘magic key’ that will unlock access to an unprecedented wealth of industry and load-level data, as well as other ancillary services. We’re thrilled to be making our debut on ProBit, one of the globe’s most trusted centralized exchanges.”

ProBit is currently listed as the world’s 23rd biggest exchange per volume on CoinMarketCap, the leading source of analysis and rankings of crypto assets. ProBit boasts daily trading volumes regularly surpassing $250 million, with weekly traffic to the site approaching 500,000 visitors. According to ProBit, it only lists what it deems to be “qualified and deserving” cryptocurrency projects.

The ProBit Exchange has an order matching speed of over 1.5 million orders per second and a customizable user interface. In addition, ProBit Exchange provides users with the option of a hardware security key in addition to 2 Factor Authentication.

LaneAxis is not new to the blockchain space. Over four years ago we saw the value and potential of digitizing industry-wide data, which from the network perspective remains non-existent to this day. LaneAxis, Inc. began operations in June 2015, and in November 2017 created AXIS Token International, a separate corporate entity based in the Cayman Islands.  Following the execution of the smart contract, the AXIS Token was deployed on Etherscan in January 2019.

Six months ago, LaneAxis partnered with blockchain engineering firm PixelPlex to integrate the tokenized blockchain platform with the legacy LaneAxis SaaS network. PixelPlex has built systems for corporate titans such as Oracle, Mercedes-Benz, Swissbank and VeChain – which recently made news for reaching meteoric all time highs for its native coin: VET.

“We’re thrilled to be on board and help LaneAxis develop its blockchain platform aimed to transform the freight transportation industry”, said Alexei Dulub, CEO & Founder of PixelPlex.

“With 3,400+ investors and $3 million raised via Reg. CF in just 14 weeks, our partnership has already proven to be a success. The project’s debut on ProBit Global Exchange will create even greater exposure and build trust in the platform. We look forward to hitting new milestones with LaneAxis.”

Here’s a snapshot of the various use-cases for the AXIS Utility Token:

ProBit will be the first – but not the only – centralized exchange the AXIS Token will be featured on. The digital asset has already been approved for listing on several other top-tier exchanges. We anticipate the token being listed on 4-5 exchanges by the end of August.

Concurrent with the ongoing token sale and exchange listing, LaneAxis has raised over $3 million in an equity Regulation Crowdfund (Reg. CF) campaign on StartEngine.