Well-known trader @CryptoNewton tweeted an AION chart that shows that the price has reached his first target of 1,800 satoshis. The other targets are estimated at 2,000 and 2,200 satoshis.

In July 2019, the AION price declined below the 1,100 satoshi area. Once there, it made a double-bottom at 650 satoshis in September 2019 and January 2020, prior to the breakout of Feb 4, 2020. The breakout seems legitimate. Besides the bullish reversal pattern, the weekly RSI generated bullish divergence for the entire duration of the pattern and moved above 50 after the breakout, a sign indicating that the price is in a bullish trend. The price has created two long upper-wicks on the weekly candlesticks, showing that is some weakness developing in the current rally. The next resistance area is found at 2,800 satoshis. 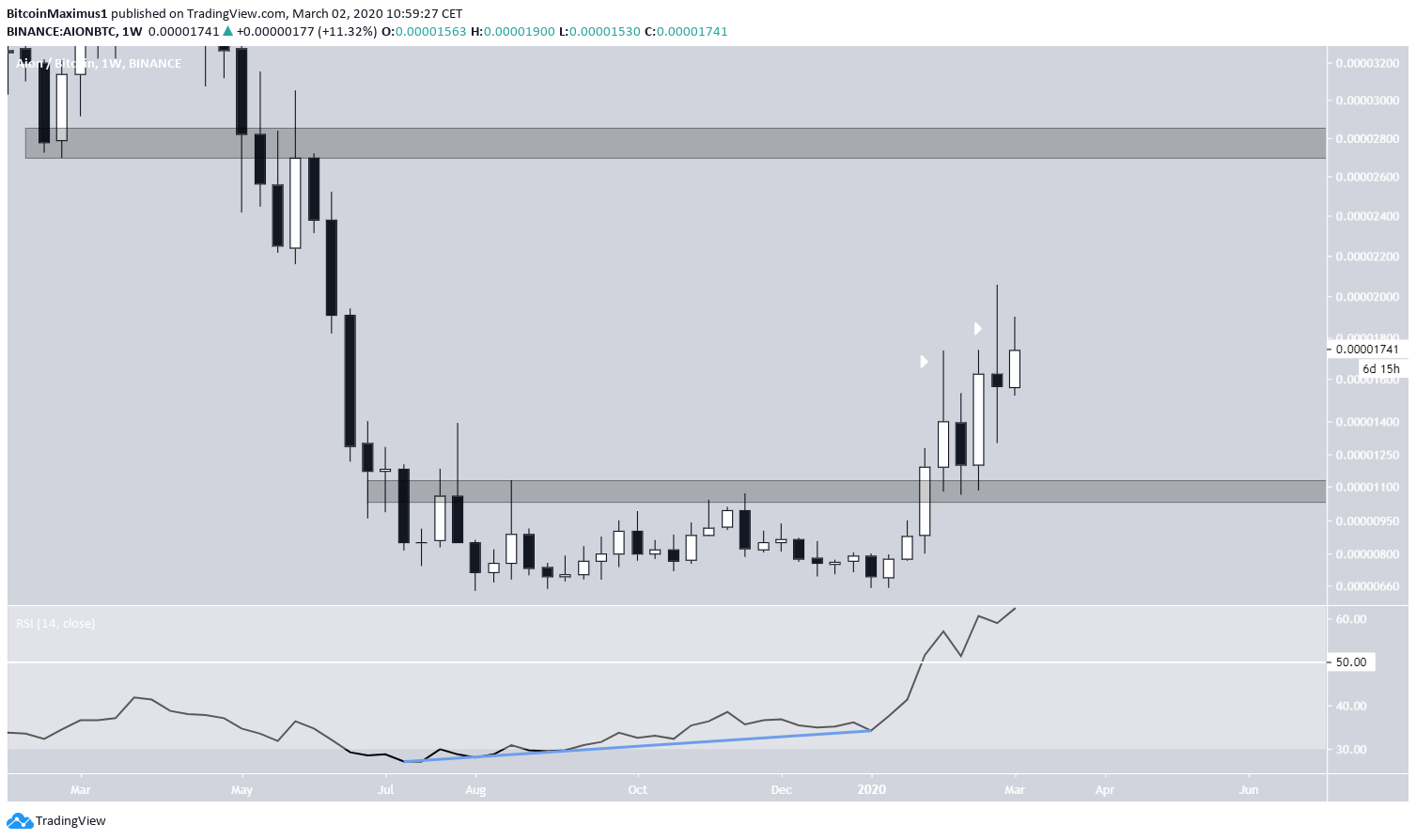 Since Jan 15, the AION price has been trading inside an ascending channel, currently being very close to its resistance line. In fact, the price reached it today only to create a long upper wick. A bullish cross between the 50 and 200-day moving averages (MA) has transpired on Feb 5. The former is currently very close to the support line of the channel. If the price were to decrease all the way to this line, it would validate both the support and the MA. 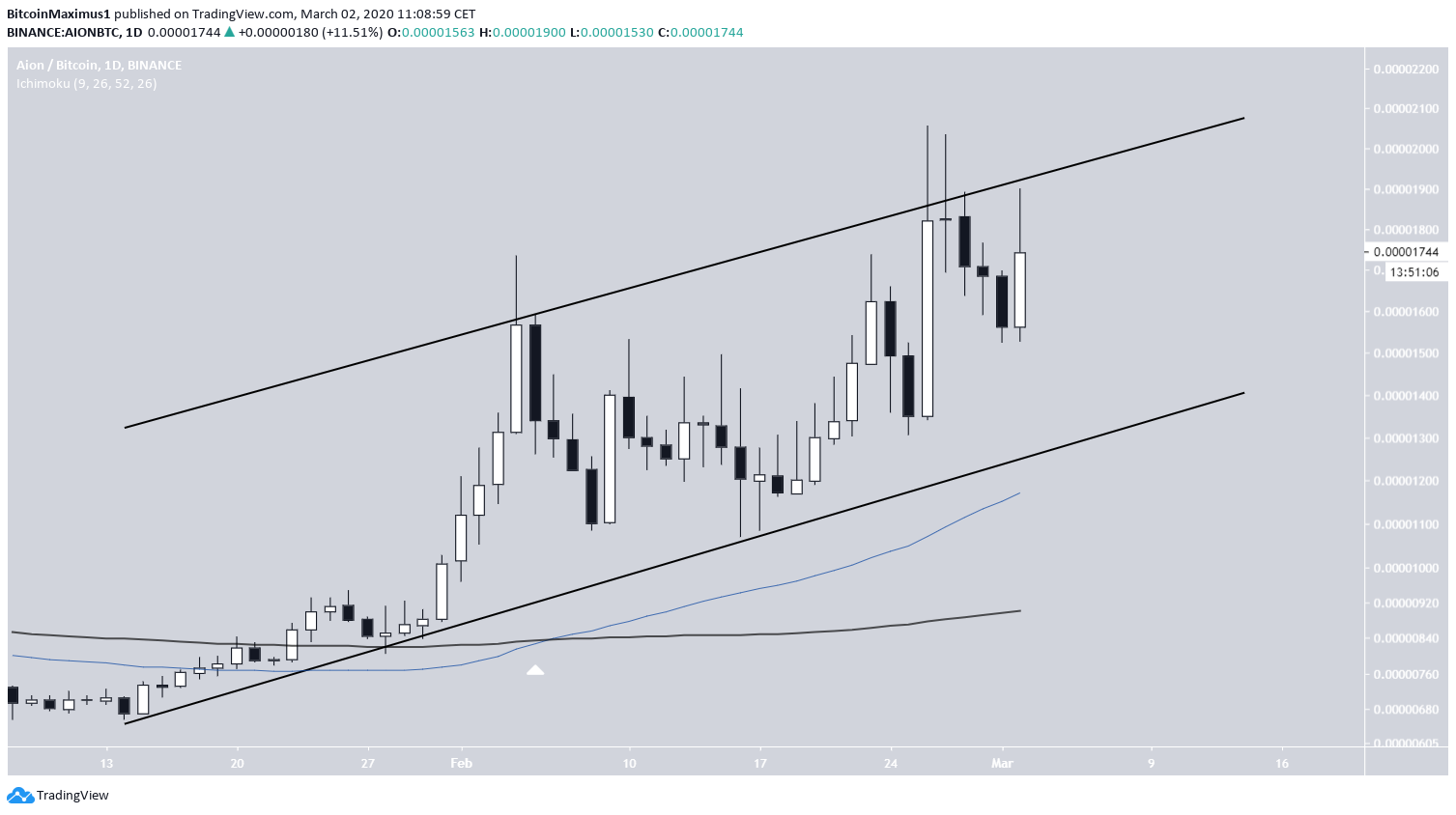 The daily RSI and current wick suggest that this decrease will occur. There are two cases of bearish divergence developing, one for the entire duration of the channel and a second with the recent highs. If the daily price fails to close above 2,000 satoshis, it would create a lower-high, a sign that the bullish trend is near a reversal. 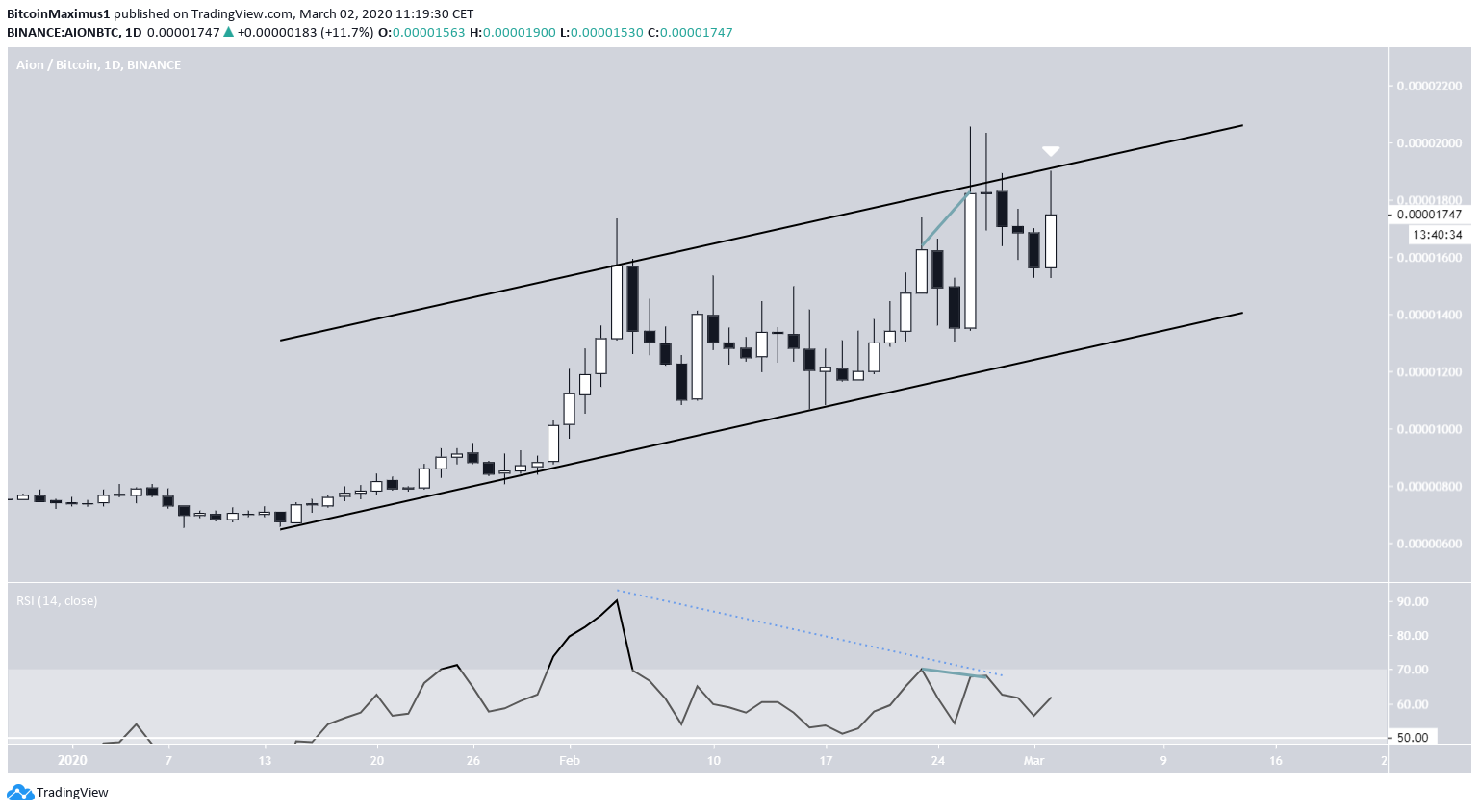 In the short-term, the price has just broken out from a descending wedge. Even though it was swift, the breakout did not have an extreme volume. Combining this with the longer-term analysis, one can presume that while the price could increase all the way to the top of the wedge at 2,050 satoshis, a decline is expected afterward. 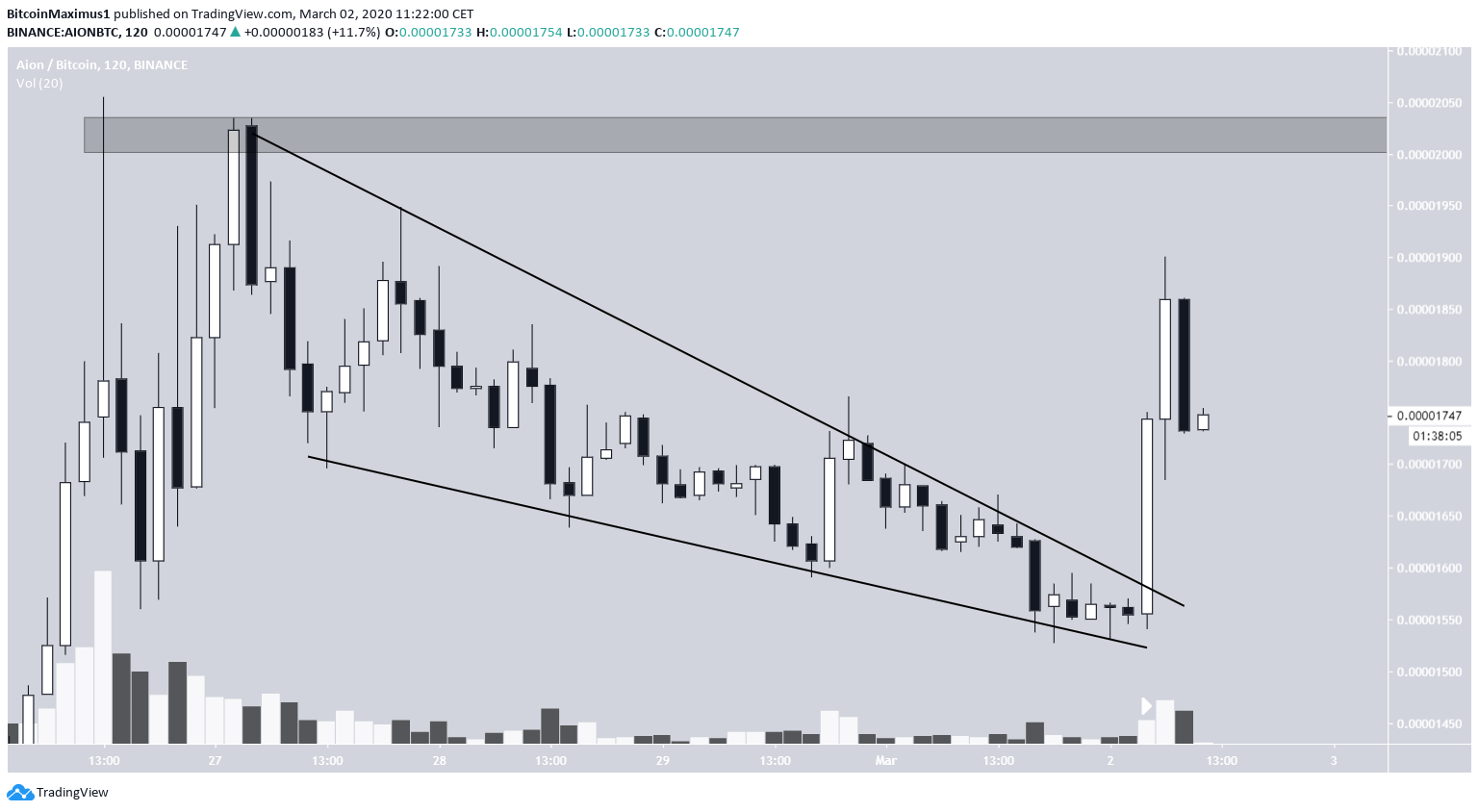 In the month of February, AION increased by 65%. The same percentage increase from the price on March 1 would take AION to 2,700 satoshis. This target is very close to the long-term resistance area at 2,800 satoshis. In addition, a breakout from the channel would be required for the target to be reached. Integrating this with an analysis of the daily time frame suggests a decrease will occur. The best-case scenario for March seems to be an increase equal to that which happened in February. 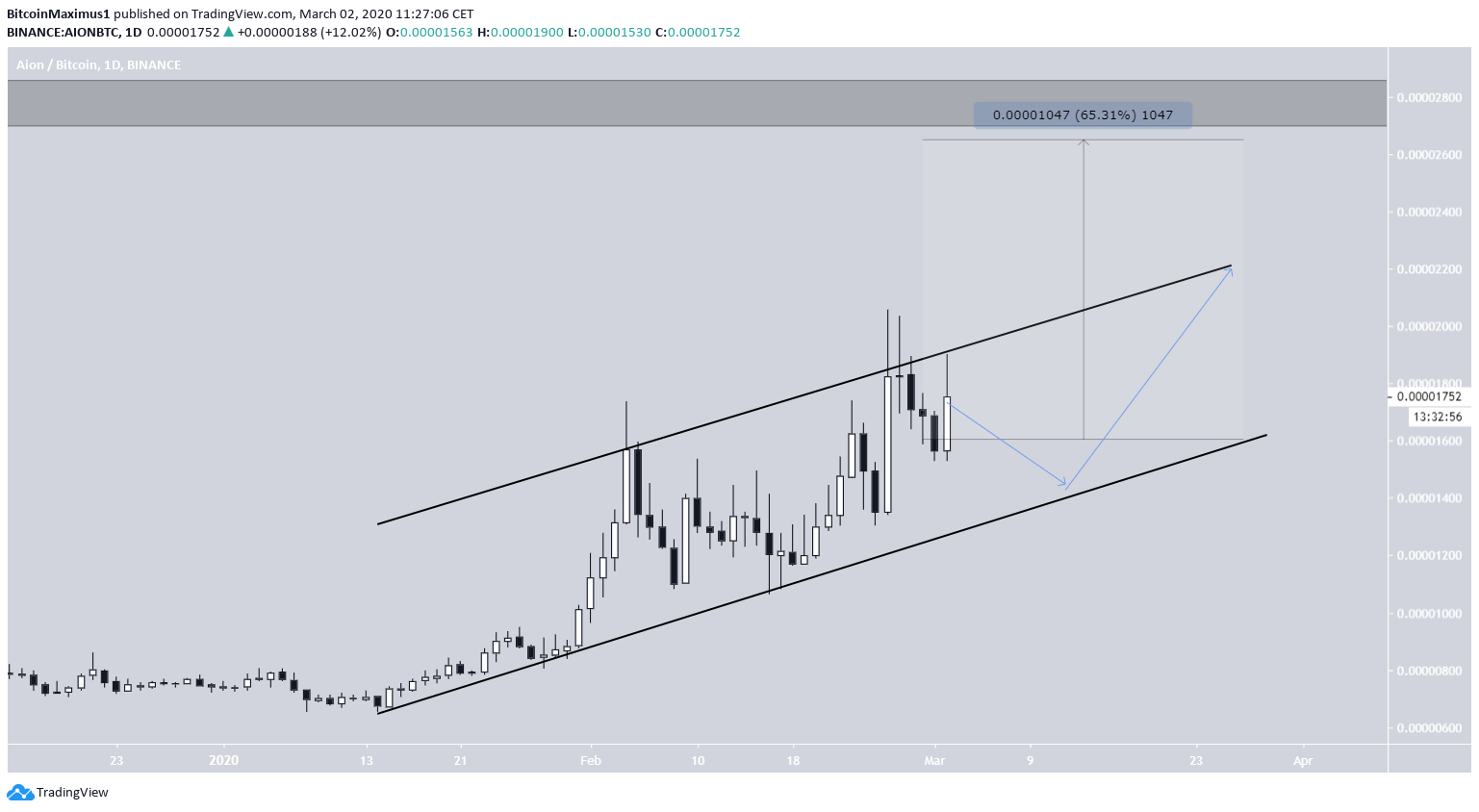 To conclude, the AION price has reached the resistance line of its ascending channel and has generated some weakness. A decrease toward the support line of the channel is expected.