ZRX’s Breakout Could Initiate an Increase of 45%

The ZRX price has reached a strong support area at 2500 satoshis, from which we believe it could soon break out.

Since October 20, 2019, the ZRX price has decreased by 41%. However, the decrease has stalled over the past month, as the price has created a substantial support area. Technical analyst & chartist @TheCryptoCactus outlined the ZRX price chart, which shows an increase of 11% over the past two days. The price is very close to reaching the range high, a breakout above, which would accelerate the rate of increase.

That's what we like to see, currently up over 11% in the past two days after the introduction of staking and the 0x portal.

Price action has finally broken back above this range EQ level and tapped against range high. Looking for EQ to be flipped support… pic.twitter.com/re2WWXMsyI

Let’s take a closer look at the price movement and see if it is likely to do so.

Beginning on September 7, 2019, the ZRX price started an upward move that eventually took it to a high of 4350 satoshis, a 190% increase relative to the price on September 7.

Since then, however, the price has been correcting. The price reached the 2500 satoshi support area on December 20 and has been trading close to that level since.

While the resistance line has not been validated sufficiently, the price is likely trading inside a descending wedge. In addition, on January 8, the price seemingly broke down from this wedge, but quickly created a long lower wick and has been moving upward since.

Whenever a breakdown occurs but the lower price levels cannot be sustained, it often means that the price will soon reverse. 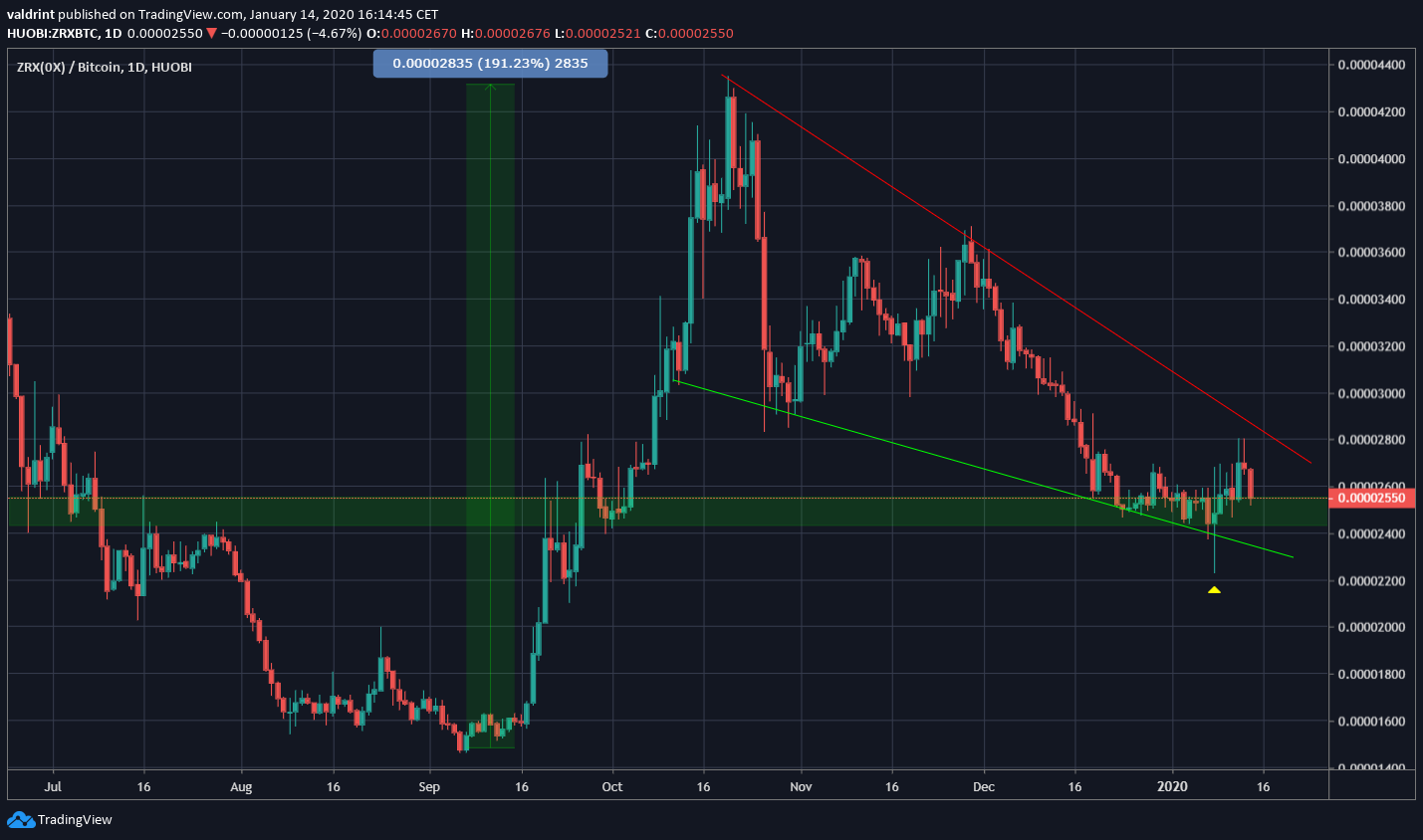 The period leading up to the false breakdown was combined with a very strong bullish divergence in both the RSI & MACD, visible up until the daily time-frame.

When we combine this with the strong support area and the creation of a bullish candlestick, we can assume that the price will break out. In addition, the trend line of the bullish divergence is still intact. 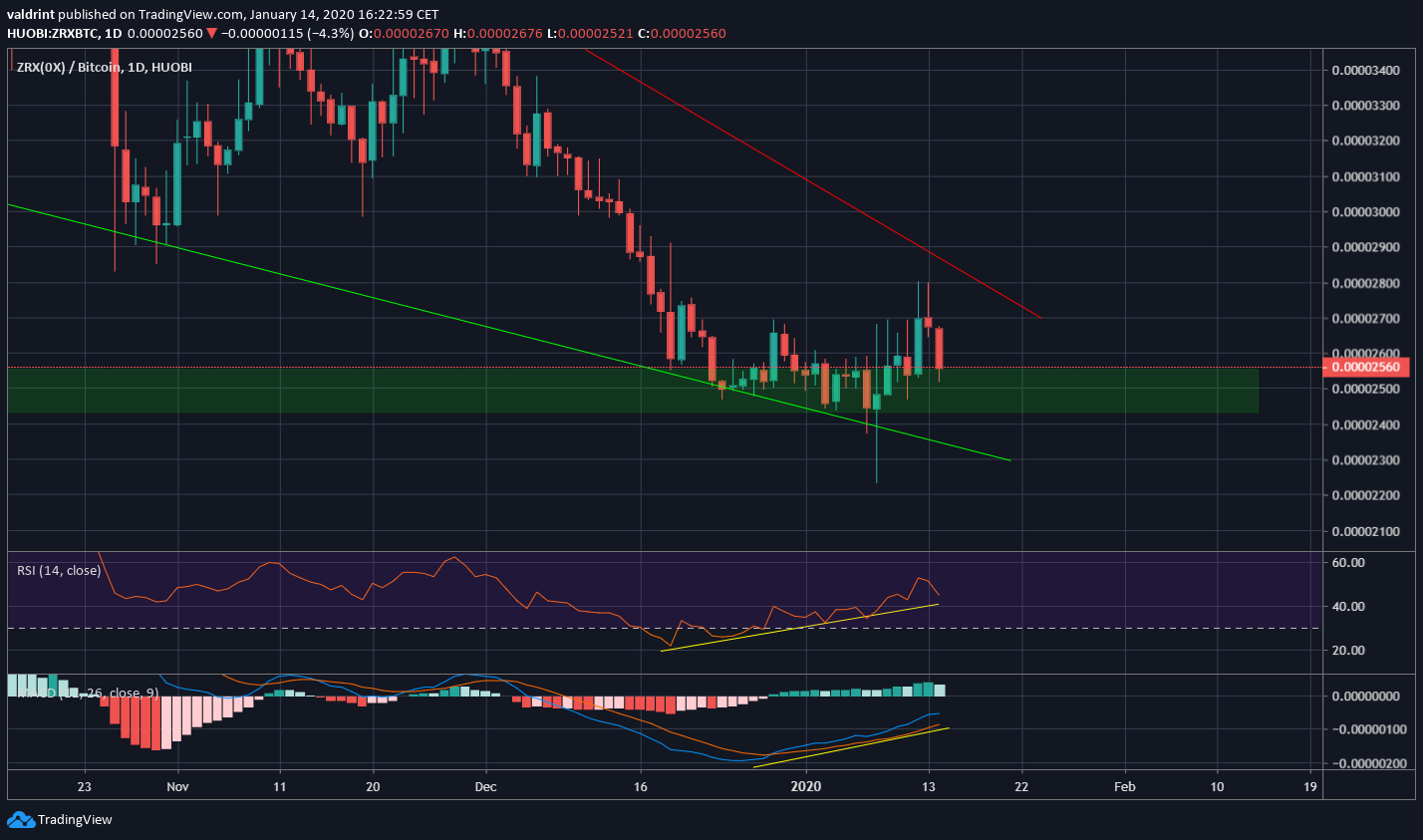 If the price breaks out, which we believe is likely, the price could reach 3600 satoshis, an increase of 45% relative to the current price. This is also the breakdown level that caused the price to reach the low of 1466 satoshis on September 7.

Due to the price movement, stop loss placement is very tricky. Placing a stop loss below the 2400 satoshi support would probably be ineffective since the price broke down below it during the creation of the long lower wick. In addition, the support line is descending, so a touch of the support line would also trigger the stop loss. So, in both cases, there is a risk of the price triggering the stop loss and then reversing to break out.

The more prudent level to place the stop loss would be below 2200 satoshis, slightly below the long lower wick of January 8. The descending support line will not reach this level until February. 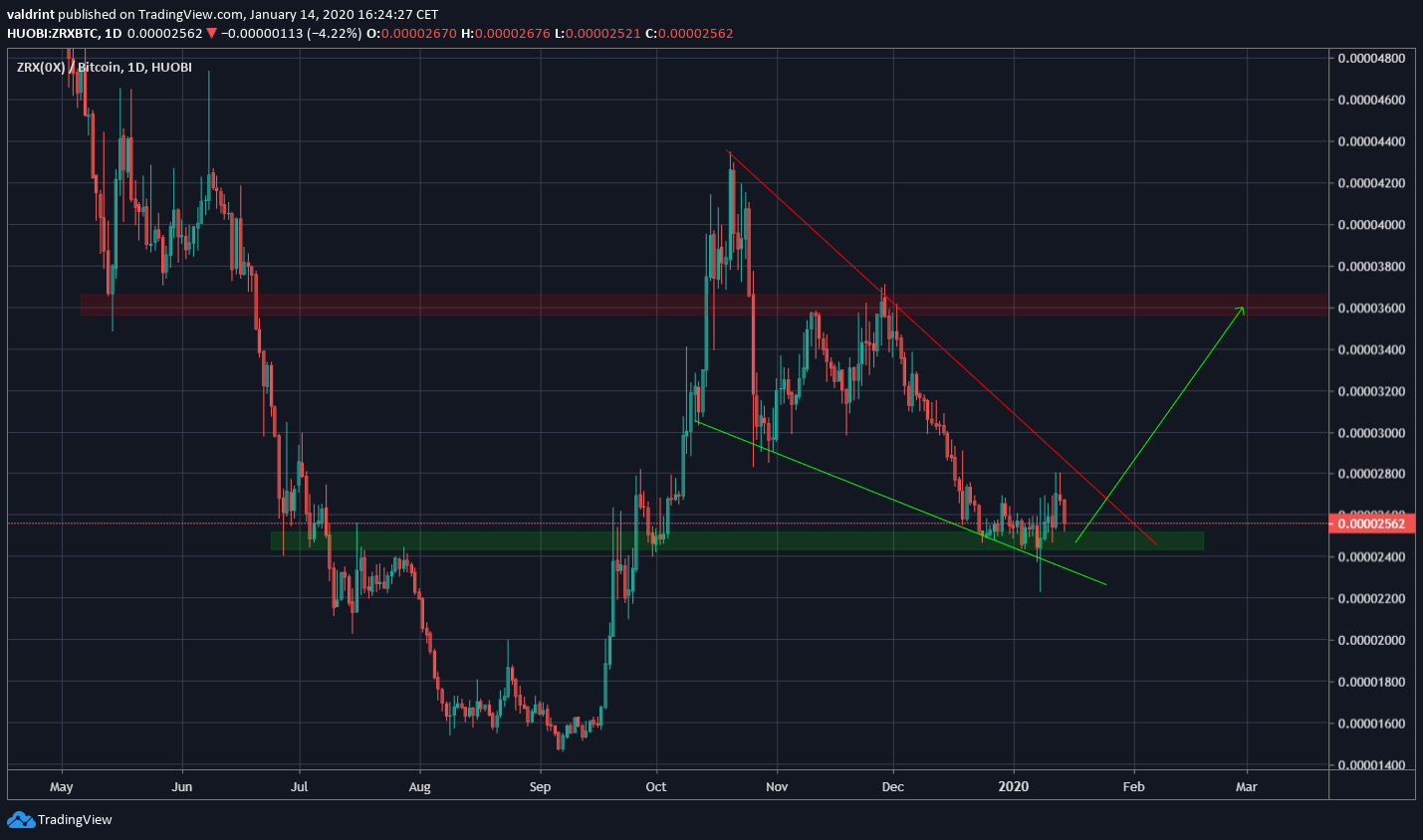 The ZRX price has possibly finished the correction, which began on October 20, 2019. A breakout from the current pattern would likely take the price to 3600 satoshis. Conversely, the possibility of the breakout would be invalidated by a breakdown below 2200 satoshis.