Since the beginning of 2020, the Zcash

BUY NOW (ZEC) price has increased by slightly more than 20 percent. On January 13, it reached a major resistance area at 460,000 satoshis.

The Zcash price had been making all-time lows for the entirety of 2019, a year in which it decreased by roughly 70 percent. Therefore, a breakout above the aforementioned resistance area could indicate that a reversal has begun.

Trader @devchart outlined the ZEC price, stating that the received another alert after the price made a breakout attempt.

In the period from September to December 2019, the ZEC price had been trading inside a descending wedge. The price broke out on December 9 and reached a high of 460,000 satoshis, before decreasing.

ZEC validated the resistance line on December 24 and created a double bottom pattern. On January 9, it began another upward move which has reached the resistance area near 460,000 satoshis, likely triggering the breakout alert mentioned in the tweet. 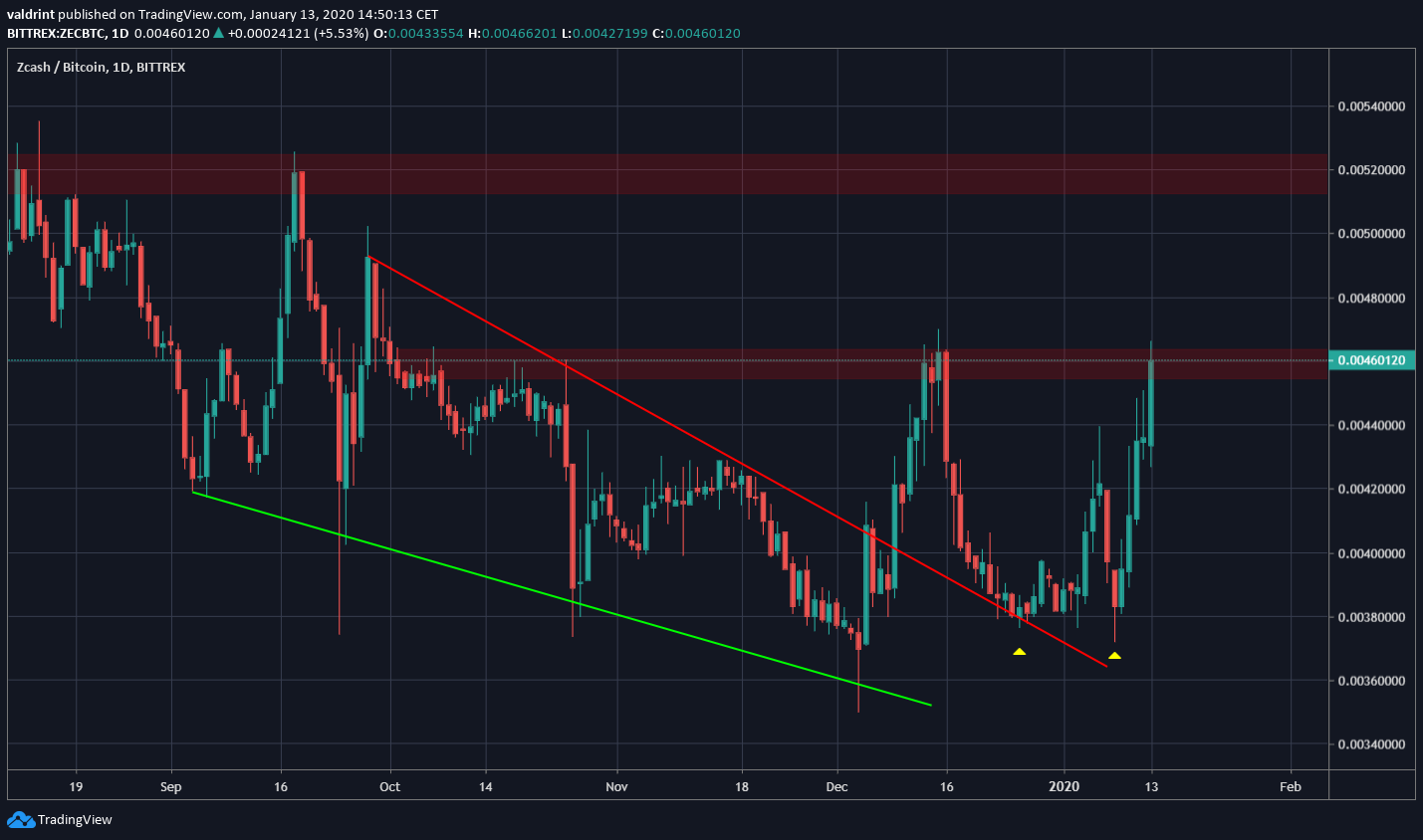 The recent movement caused ZEC to increase above its 100-day moving average. However, it is still well below the 200-day one — which is close to 520,000 satoshis, where the next resistance area is located.

The most important support area is found at 380,000 satoshis, a breakdown below which would take ZEC into price discovery — reaching new all-time lows until it makes a bottom. 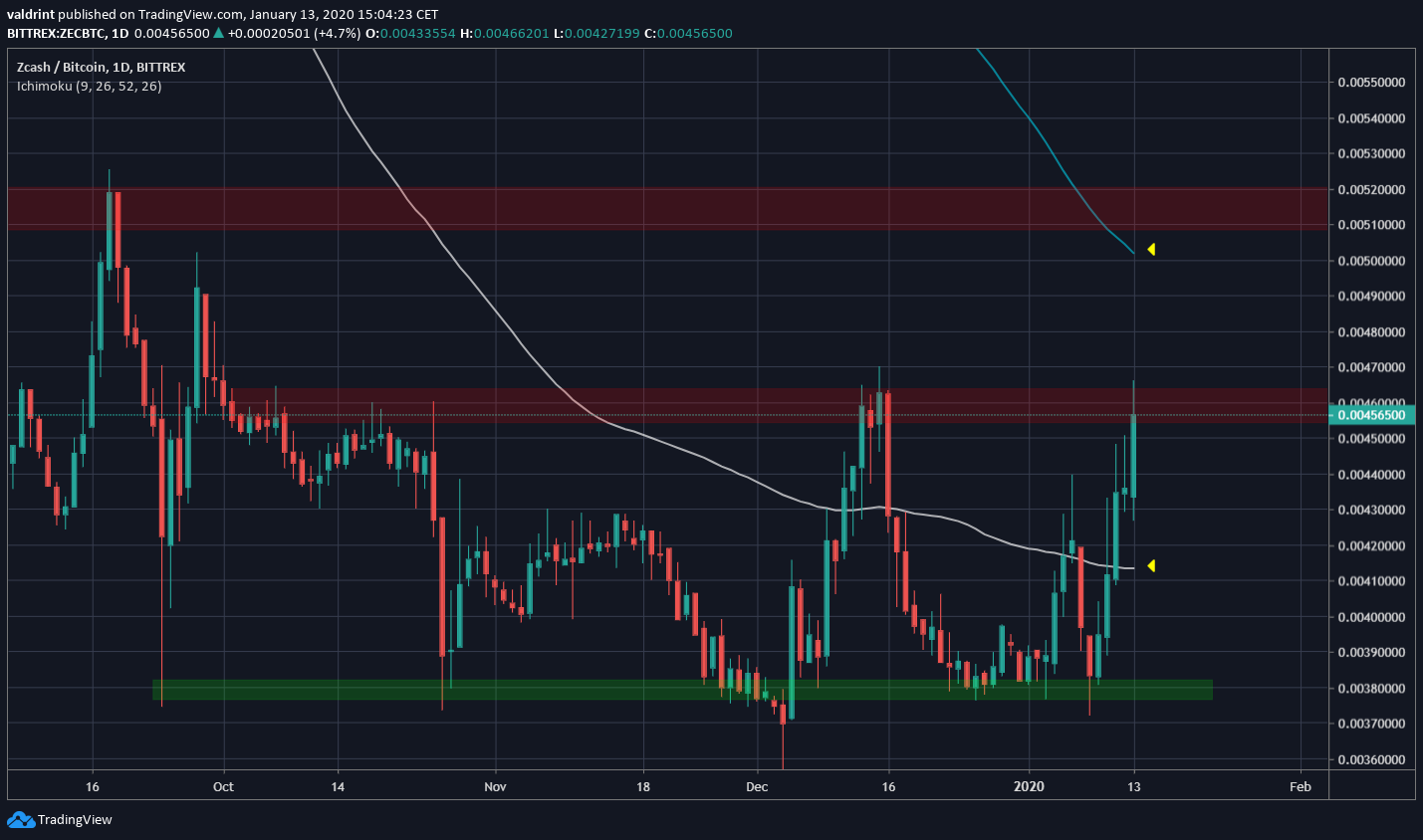 In addition, there has been some massive bullish divergence developing in the higher time-frames of the RSI & MACD, suggesting that the price will eventually break out from this trading range. 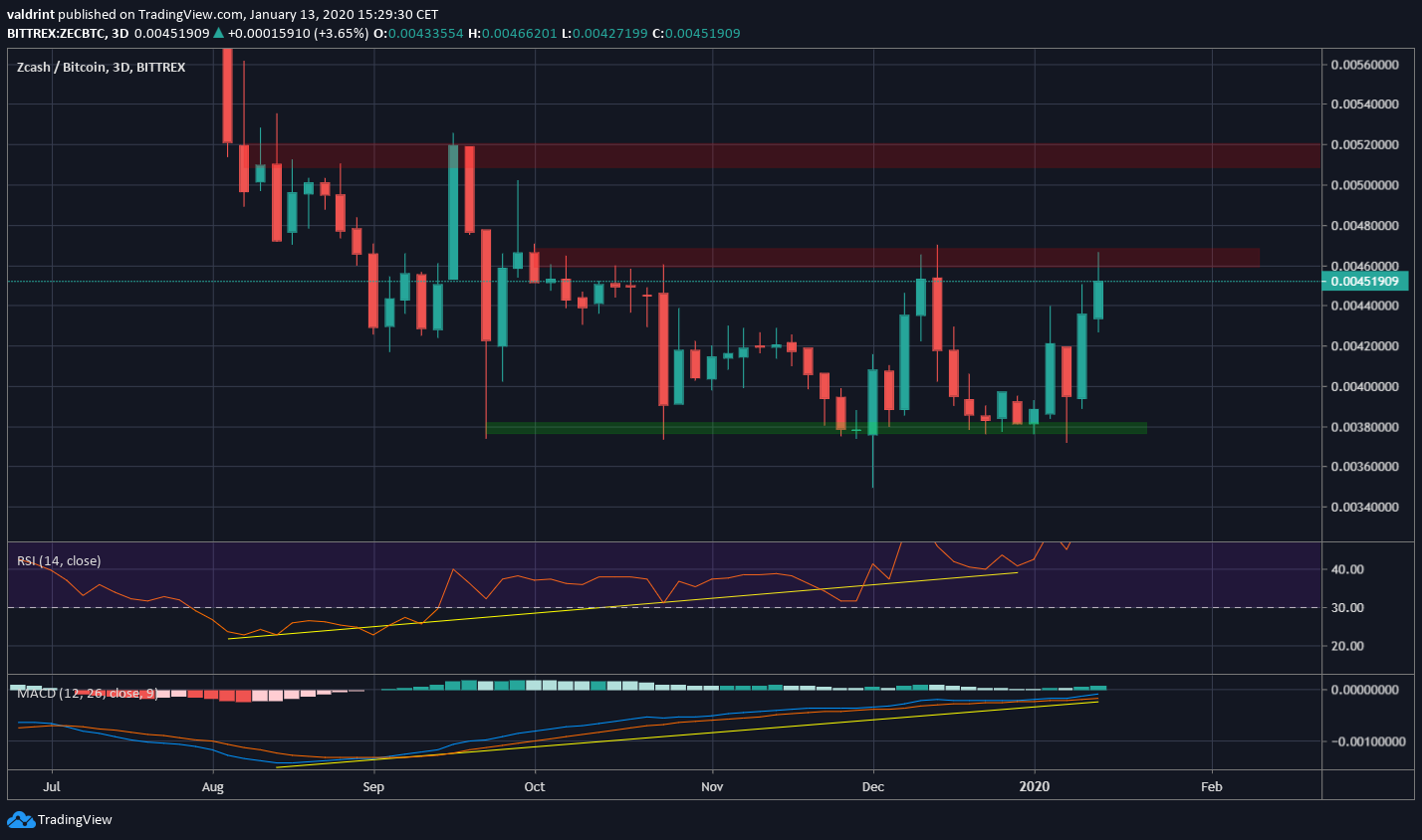 Since the upward move began, the ZEC price has been following an ascending support line. The line is very steep, indicating that it is likely unsustainable in the long-run. In addition, there is a possible resistance line forming, which would create an ascending wedge.

A breakdown from the wedge could take the price to 430,000 satoshis, which is the closest support area. 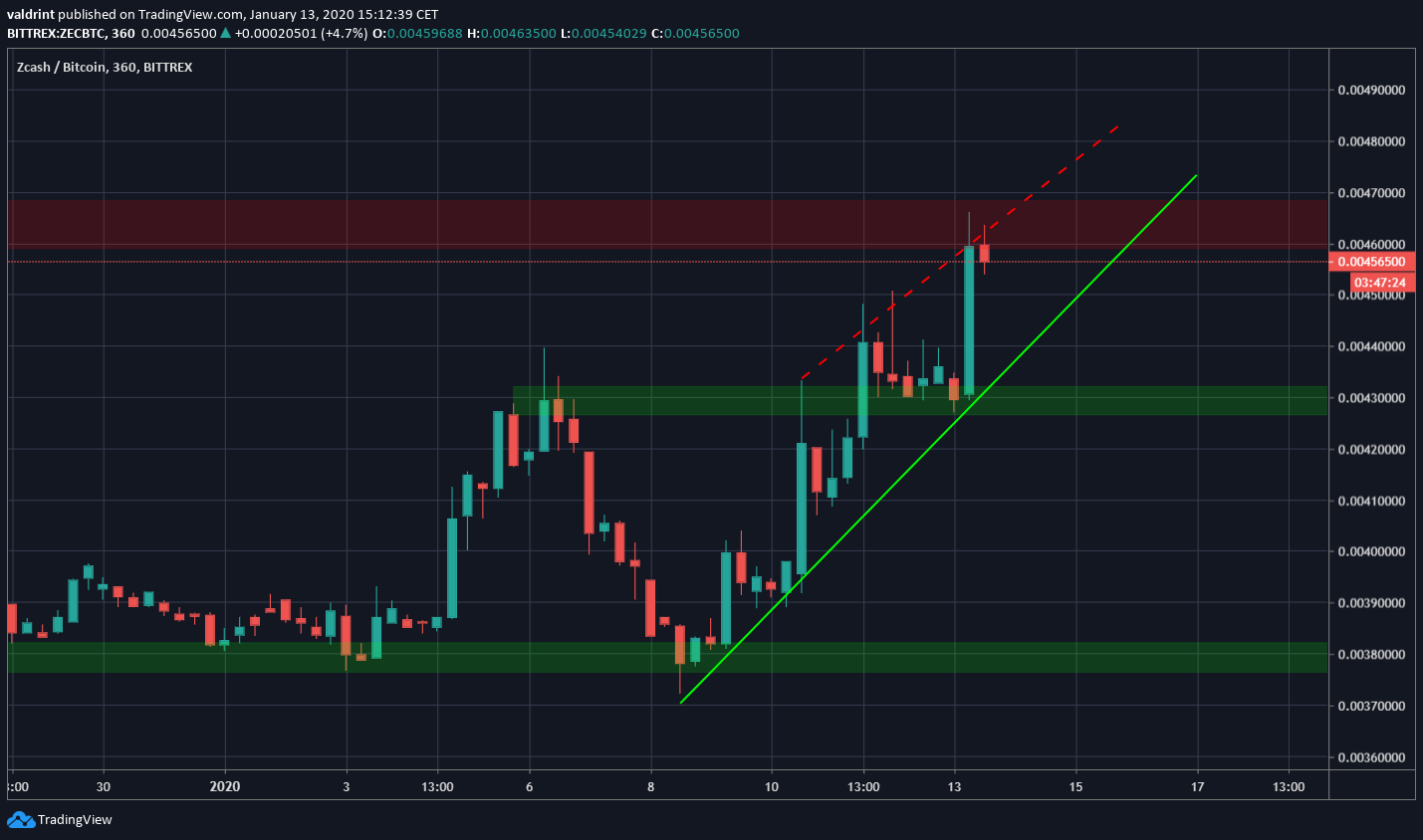 However, besides the potential bearish pattern, there are no other signs that indicate that the Zcash price will break down. Therefore, we believe the proper way to manage a position in ZEC would not be to short in anticipation of the top but to place a trailing stop below the ascending support line instead. Initially, the stop could be placed at 430,000 satoshis, and moved upward in increments of 10,000 satoshis every day, in order to reflect the slope of the ascending support line. 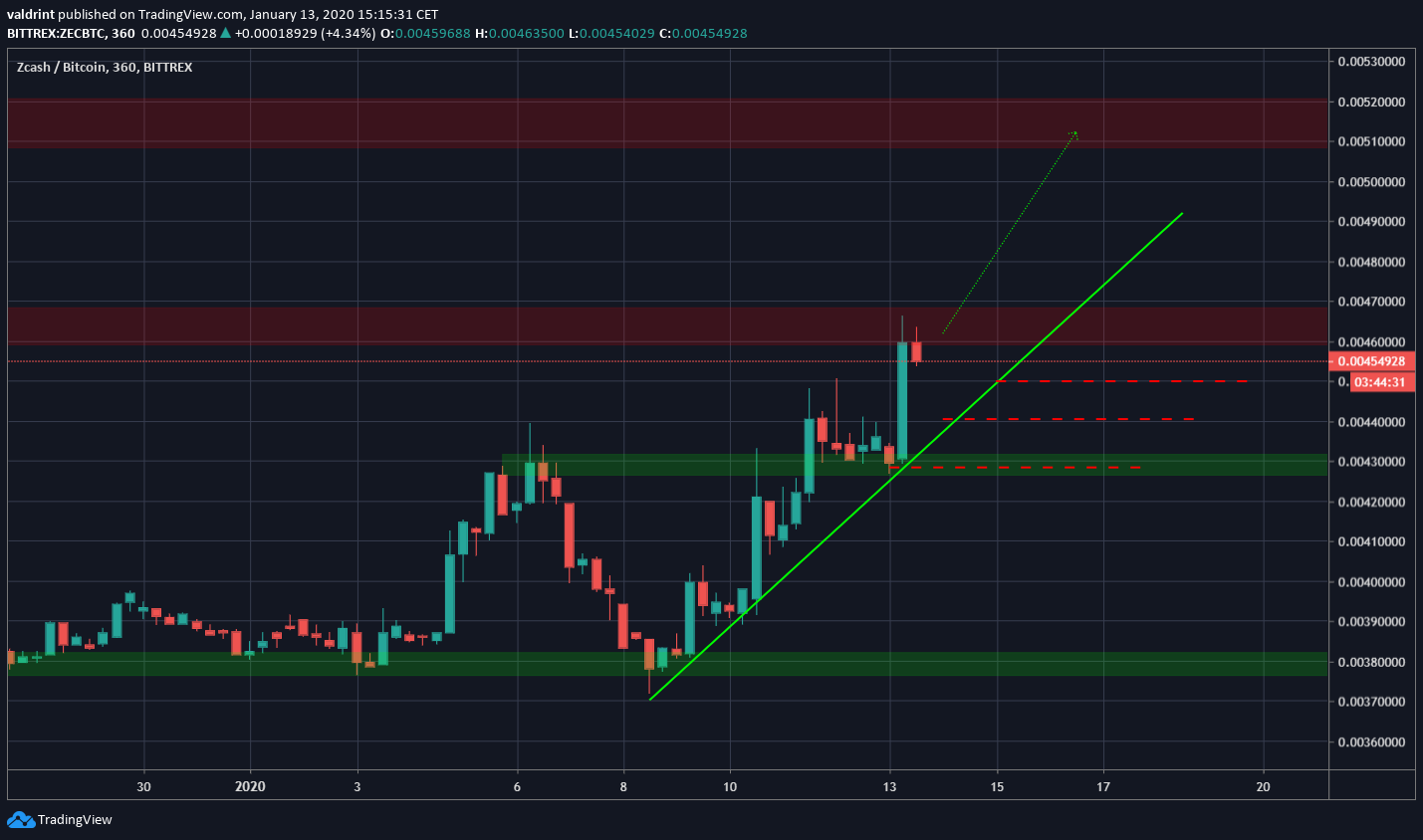 To conclude, ZEC began an upward move on January 8 and has reached a significant resistance area. As long as the price stays above the current ascending support line, it is likely to reach 520,000 satoshis. A breakdown below the support line would take the price to 430,000 satoshis.

ZCash Is the Worst Performing Proof-of-Work Cryptocurrency in 2019

CoinMall Removes Zcash and Bitcoin Cash Due to Poor Uptake

Zcash Price Analysis: Where Will ZEC/BTC Make a Bottom?

Litecoin Added to Flexa, Now Accepted as Payment at Over 39,000 Locations

(LTC) Litecoin News 1 year ago
No Result
View All Result