Share on FacebookShare on Twitter
At BeInCrypto, we publish regular price analyses and predictions for various cryptoassets. In this analysis, we perform a technical analysis of VERGE using an XVG/USD($) trading pair. This enables us to predict short-term price fluctuations. Learn more below:

The price reached a low of $0.008 on Apr 15 and has been gradually increasing since.

Will the price of Verge keep going up or will a reversal bring lower lows?

In this section, we analyze the price of XVG/USD on Bittrex at one-hour intervals from Apr 11 to Apr 18 to trace the current trading pattern.

On Apr 11, the price reached a hourly high of $0.0092. Several market cycles have been completed, each time the price has reached lower highs.

Tracing these highs gives us a descending resistance line: 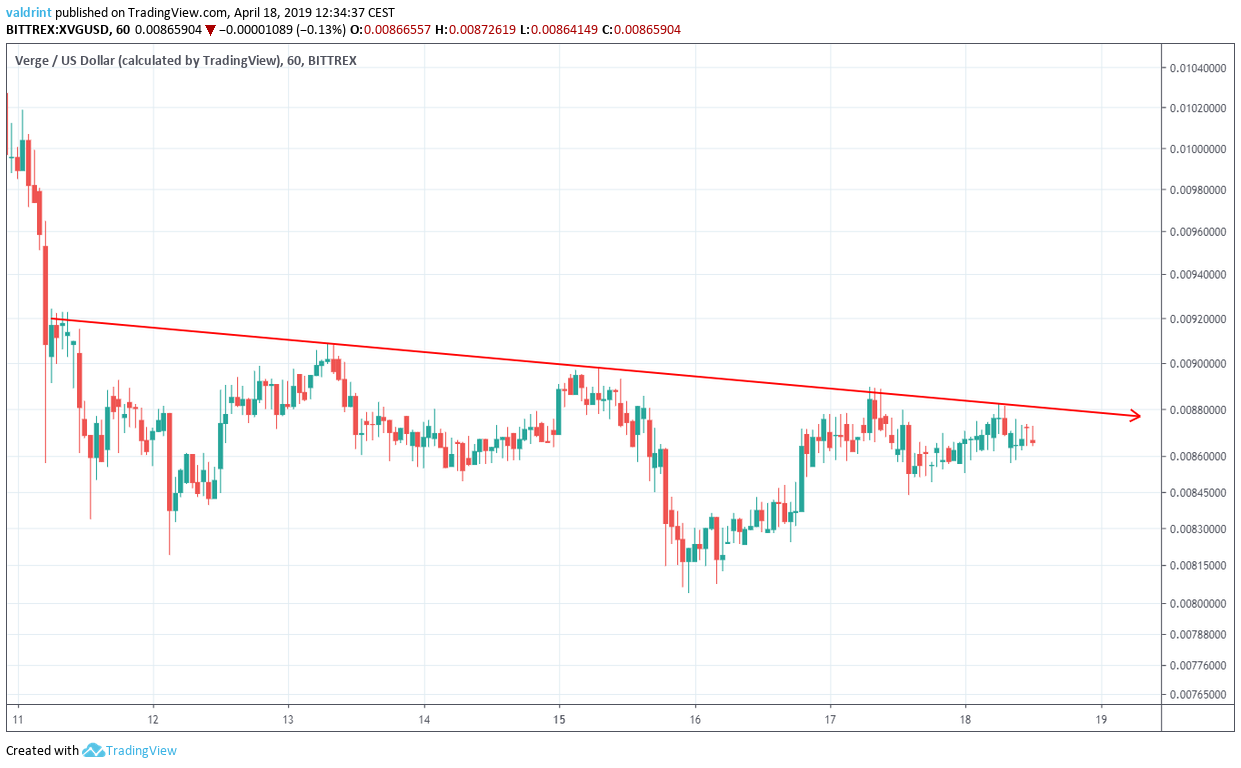 In addition. Verge reached a low of $0.0083 on Apr 11. This low was followed by a sharp increase. However, prices subsequently fell.

Lower lows experienced during this time are traced by a descending support line the graph below. Together, the support and resistance lines combine to create a descending channel: 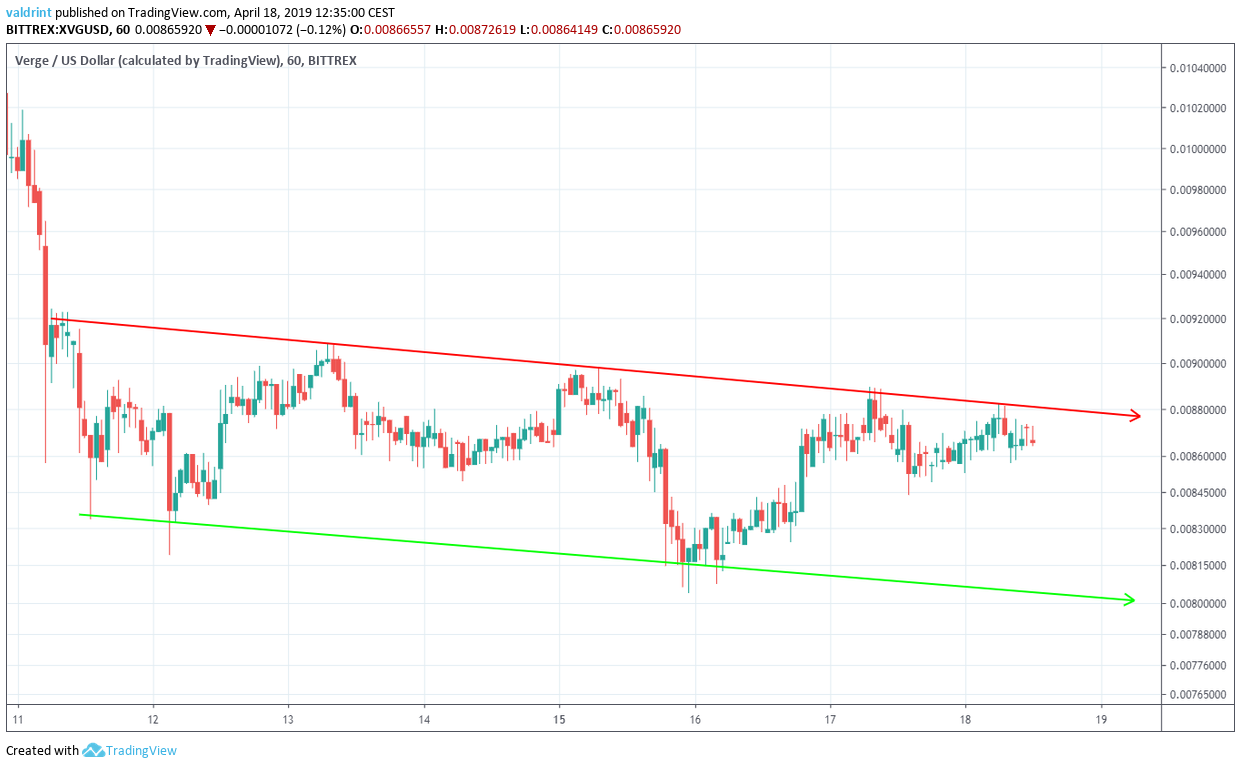 It is likely that the price will keep trading inside the confines of this channel until a decisive move occurs.

In order to predict the direction of the move, we need to take a look at some technical indicators.

We begin with the MACD and RSI.

Both of these are shown in the chart below: 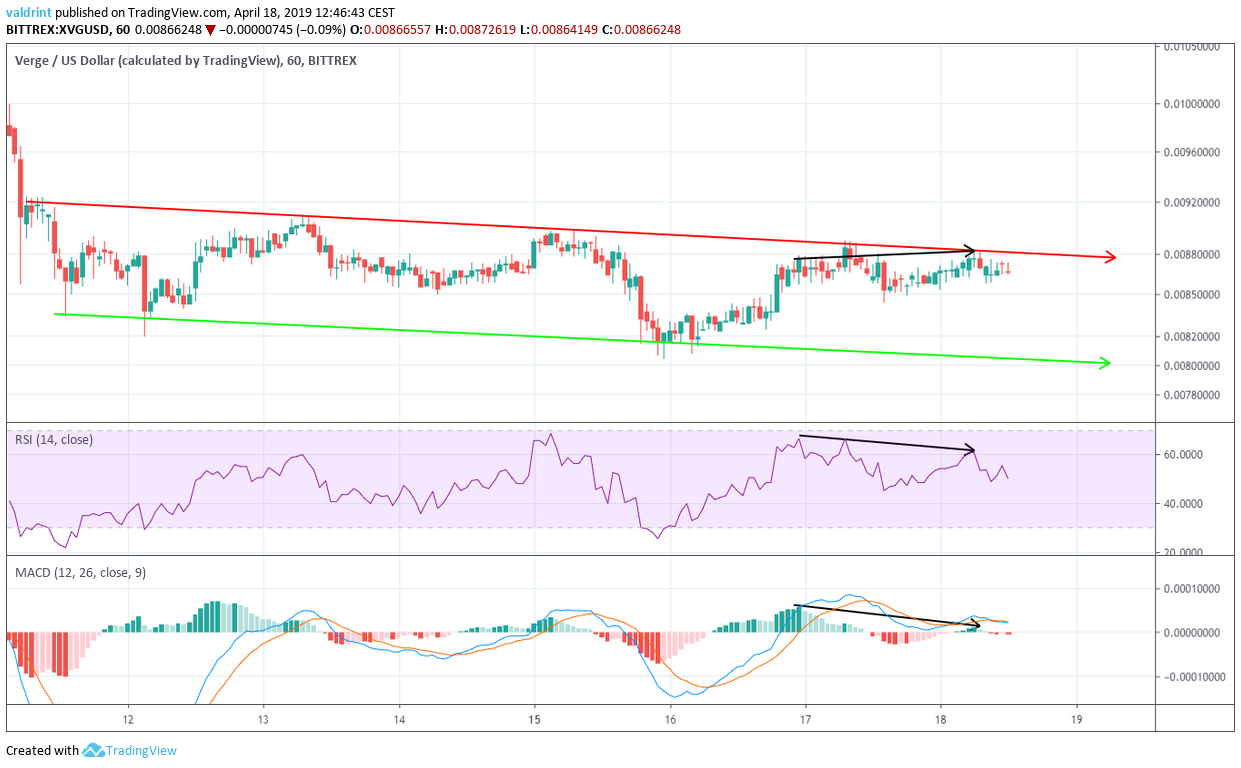 Similarly, the RSI and the MACD made the first high on Apr 16. However, they have continued to generate lower values since.

The use of these indicators suggests that the price will eventually drop towards the support line of the channel.

However, it is possible that a sharp move occurs. If it does, where will price begin a reversal?

To determine the actual possible future price levels, we incorporate resistance areas into the analysis.

Resistance areas are created when the price visits the same level several times. If a breakdown occurs, they can create possible areas of reversal.
These are shown in the graph below: 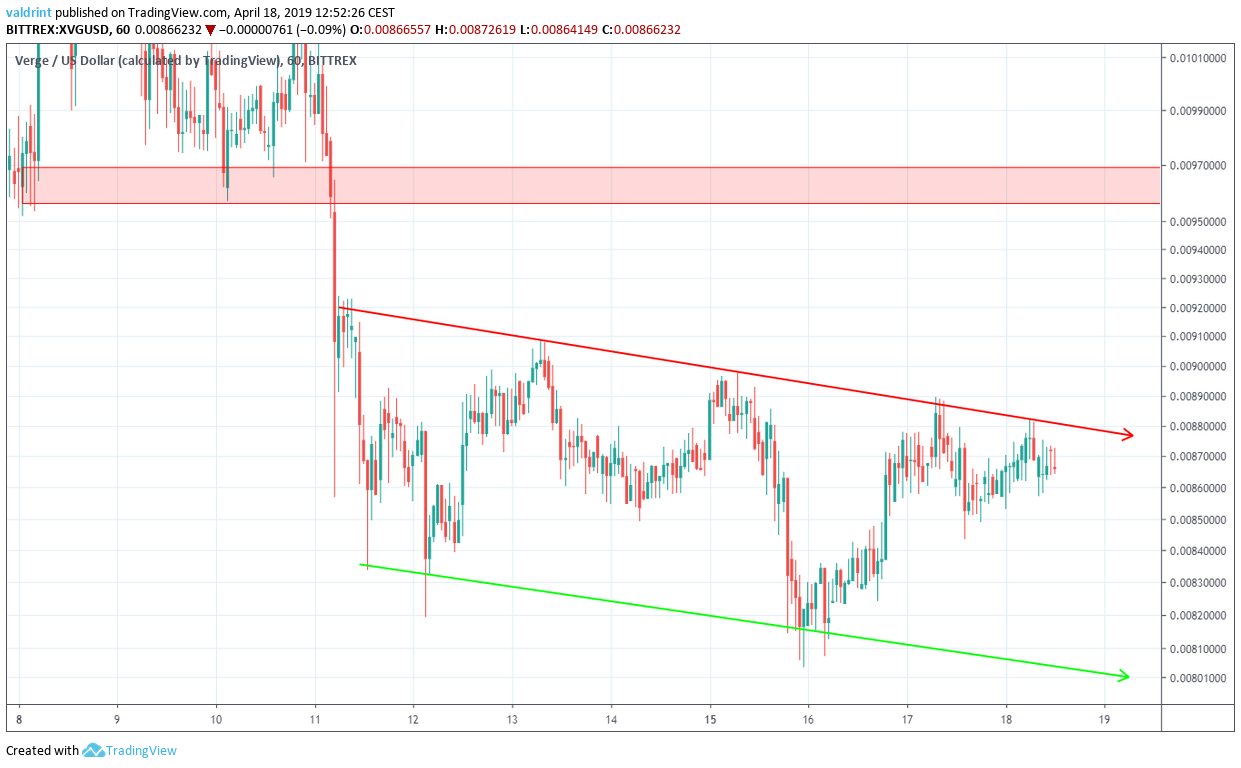 The closest resistance area is found near $0.0096. If the price breaks out of the channel it is likely to reach this area. We do not believe this will occur in the short-term.

Based on this analysis, the price of XVG is likely to drop towards the support line of the channel. We cannot confidently predict a breakout or a breakdown.

Do you think the price of XVG will break out from the channel? Let us know in the comments.

The Verge (XVG) price made several breakout attempts on December 5. Due to readings...

Will a Verge Hardfork Push the Privacy Coin to Past Highs?

The Verge (XVG) price initiated an upward move on November 14. It has been...

An unknown entity has reportedly been exploiting Verge’s X17 mining algorithm for the past...