BUY NOW (XRP) reached a low of around $0.30. Since then, it has enjoyed a gradual upward move. While there have been some fluctuations, the rate of increase has remained constant.

Is XRP’s price going to keep rising? When will it breakout of the resistance?

Before we answer those questions, let’s first take a look at the prices between Mar 4 and Mar 20: 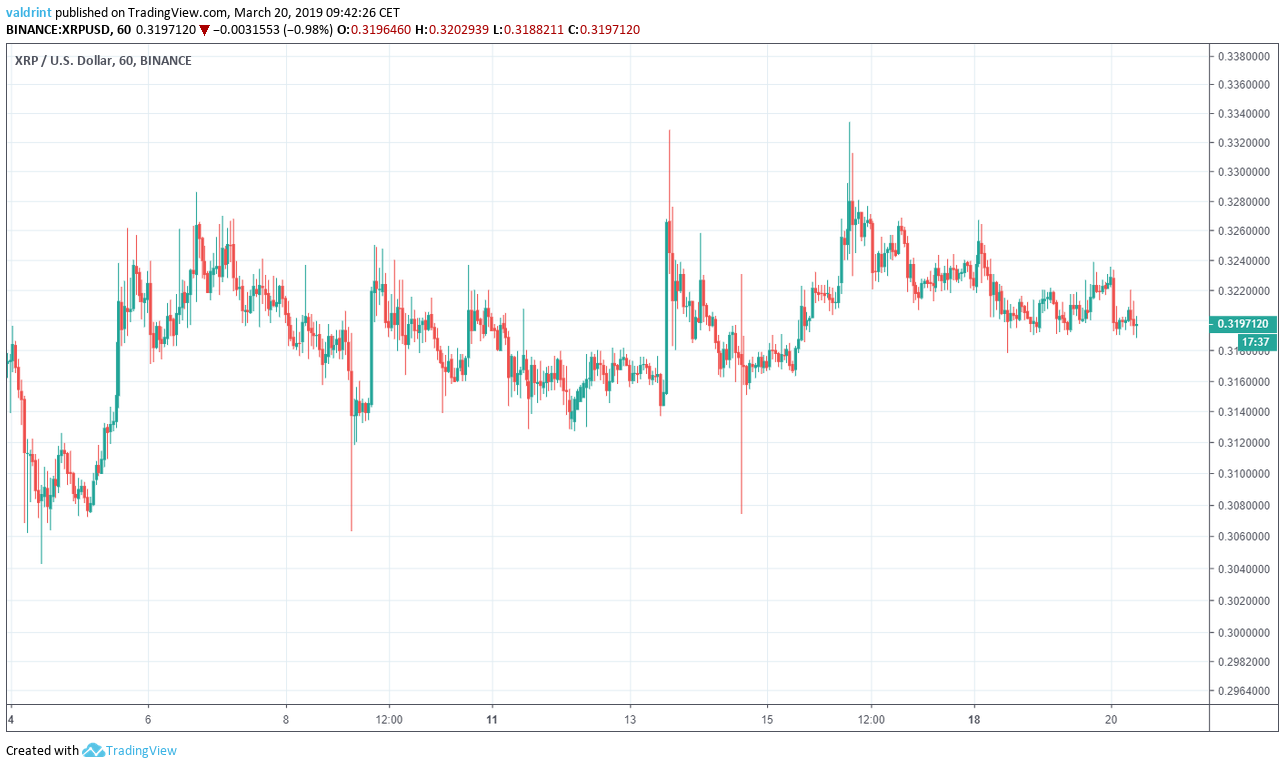 In our Mar 19, XRP  analysis, we predicted that XRP—still known widely as Ripple— would begin an upward move. It was suggested that the price would reach the support line.

Over the last day, this growth has yet to be validated. On the contrary, the price of XRP has remained generally at the same level. In short, an upward move has yet to begin.

Based on today’s analysis, we still believe that XRP will eventually initiate another upward move and break out above resistance. We did not predict the rise within a 24-hour period, so our prediction has yet to be invalidated.

Do you want to know how we came up with this prediction? Check out our daily analysis of XRP below:

The price of XRP on Binance is analyzed at one-hour intervals from Mar 4 to Mar 20.

The price reached a low of $0.304 on Mar 4. Since then, the price has been on a gradual upward move. Moreover, several market cycles have been completed with every low being higher than the preceding one. Tracing these lows gives us an ascending support line. 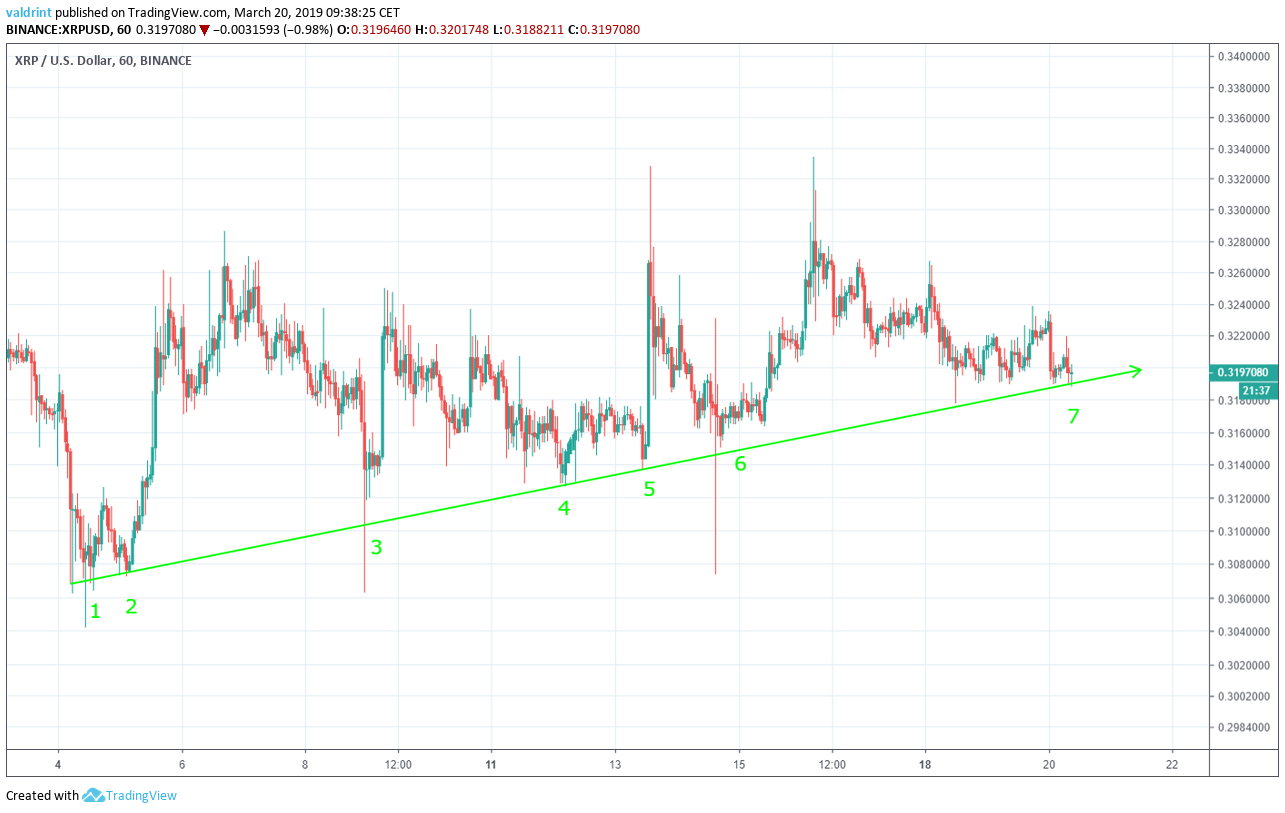 The support line acts as a floor to price, preventing further downward movement. It theoretically traces the lower limits of the price over time. It also serves to measure the price’s rate of growth.

The price of XRP has been increasing at the same rate as predicted by the support line since Mar 4.

A breakdown below the support line such as the wick lows of $0.306 and $0.307 on Mar 8 and Mar 14 respectively are considered insignificant since they were not succeeded by continuous price decreases.

It is likely that the price will continue to increase following this line. However, the support line alone is not sufficient in estimating if a breakout or breakdown will occur.

The price reached a high of $0.328 on Mar 5. A rapid upward move ensued. Several market cycles have been completed since with the $0.328 level reached three times total. Tracing these highs gives us a horizontal resistance line. 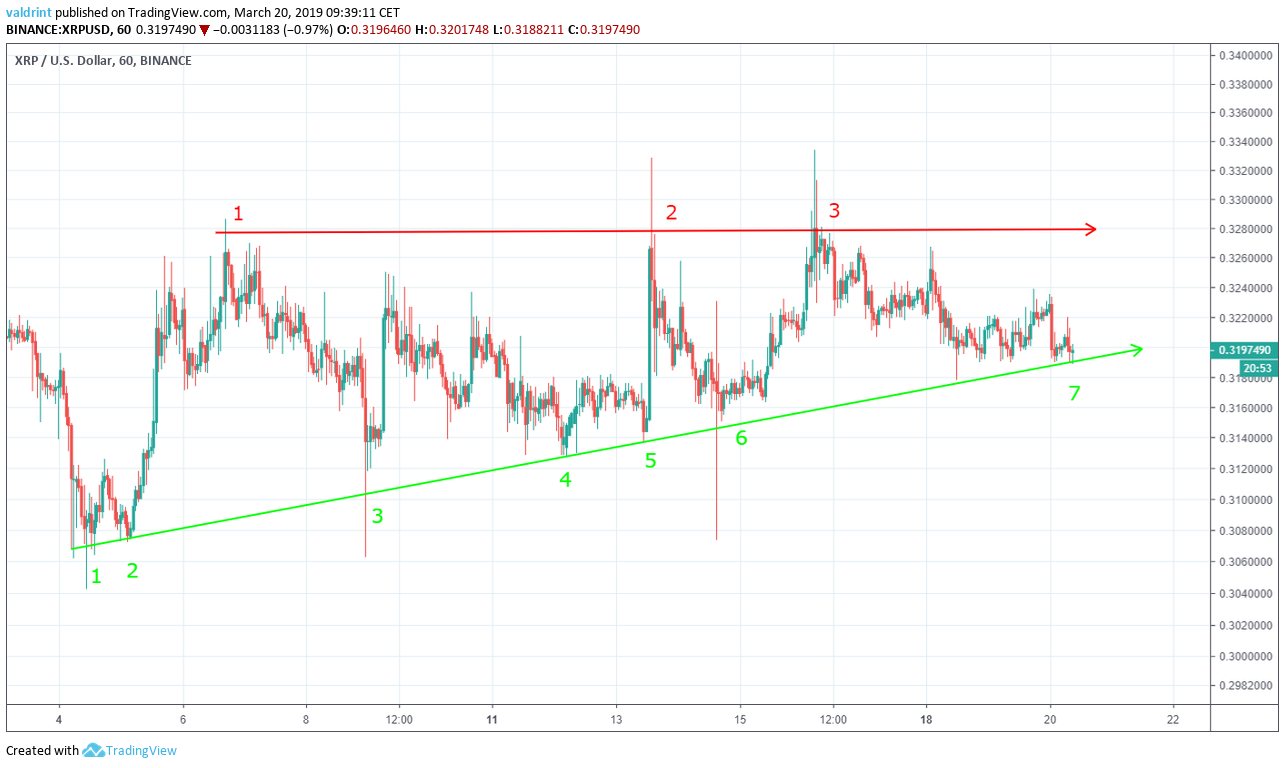 Similar to the support line, the resistance line effectively acts as a ceiling to price, theoretically preventing further upward movement. Highs above the resistance line such as the wick high of $0.3328 on Mar 13 and $0.3333 on Mar 15 can be considered insignificant since they were succeeded by sustained movement above the line.

The resistance and support lines create an ascending triangle. This is a bullish pattern that suggests future price increases. The use of the triangle pattern better predicts price fluctuations than support or resistance lines alone.

Price is currently on the edge of the support line of the triangle.

If this pattern proves to be a reliable predictor of price, the overall upward trend should continue as the price fluctuates between the resistance and support. Eventually, a breakout from this bullish pattern is likely to occur.  This might not occur until a point of convergence between the resistance and support lines—which may not be for several days. 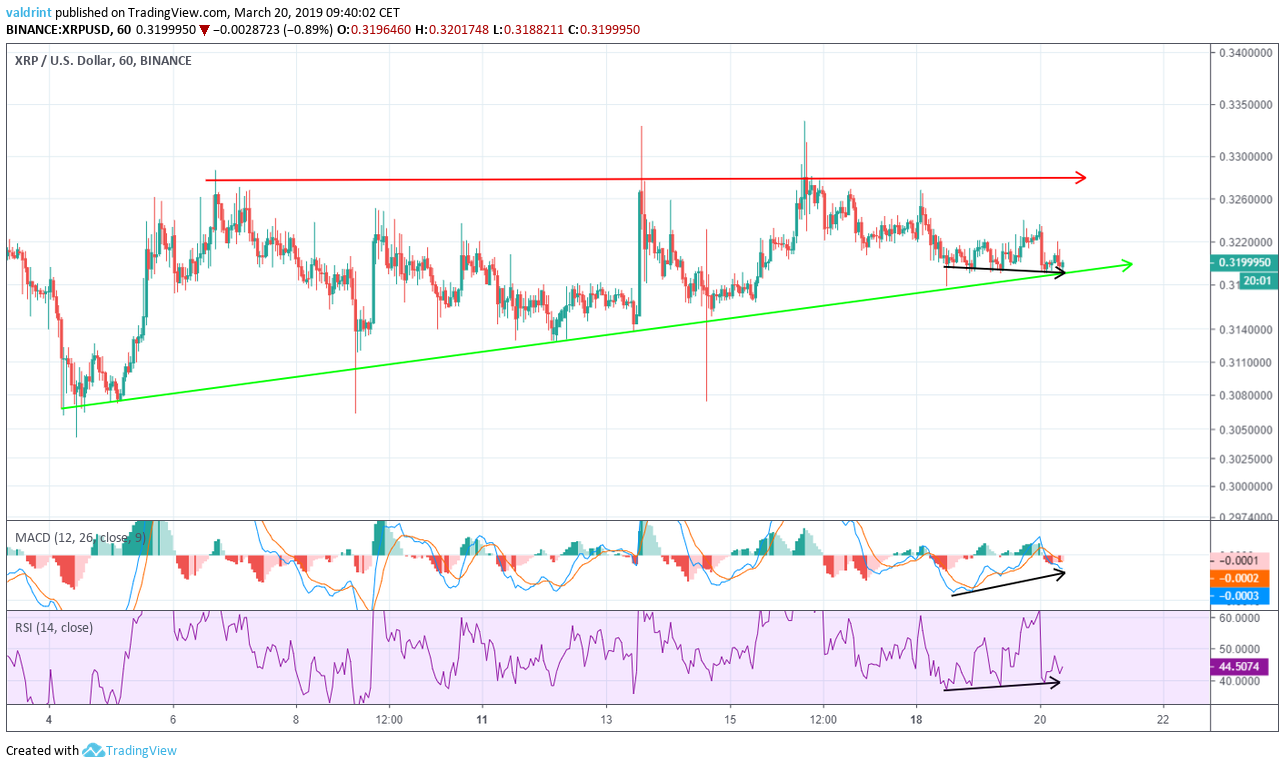 Similarly, the RSI and the MACD made the first low on Mar 18. However, instead of making another lower low, they both proceeded to increase. This is known as bullish divergence and often precedes price increases.

It is especially effective if it occurs in a bullish pattern. This is the case with XRP since the bullish divergence has occurred close to the support line of the bullish ascending triangle.

Using this indicator, it is likely that the price will initiate another short-term upward move and head for the resistance line.

The price of XRP on Binance is analyzed at two-hour intervals from Feb 20 to Mar 18 to better visualize future possible resistance and support levels. 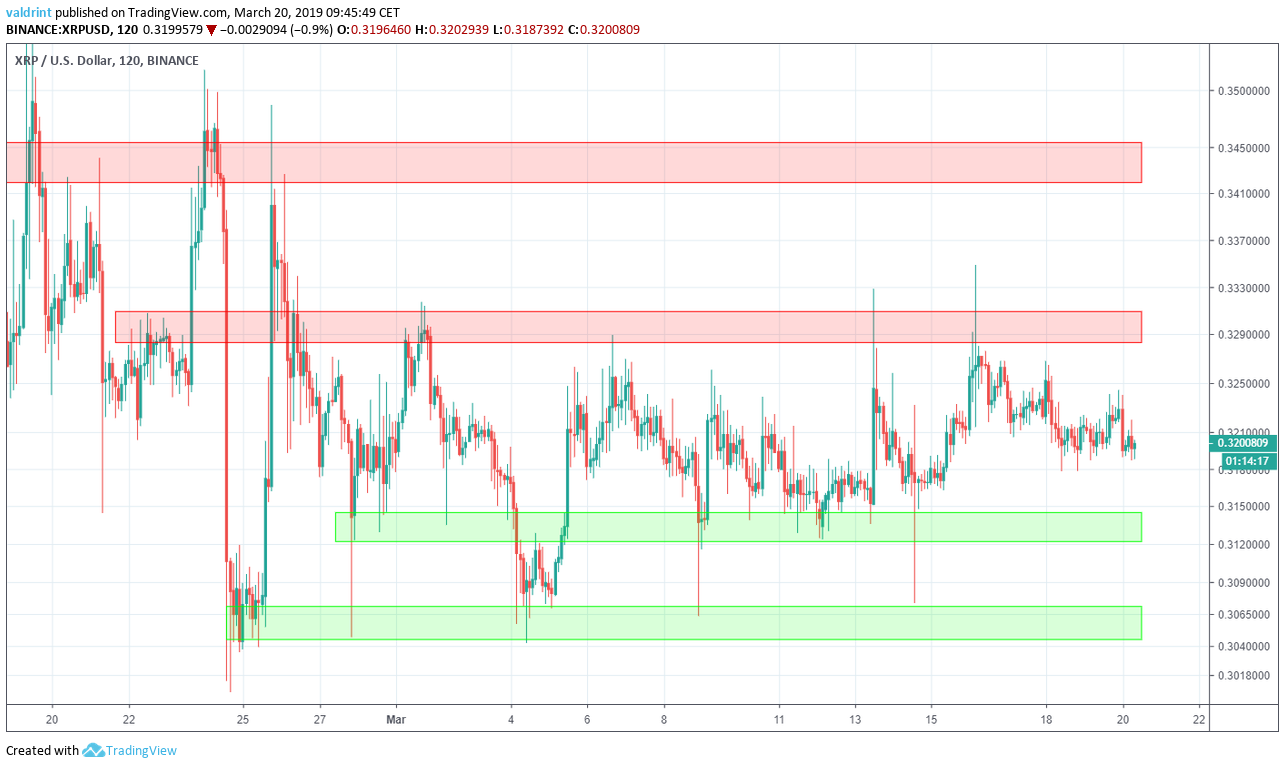 There are two visible resistance areas, near $0.329 and $0.345 respectively. This means that in the case of a breakout, they would provide likely reversal areas. This was visible in the breakout of Mar 13 and Mar 15, since the price reached a high of $0.3328 and $0.3333 before ultimately breaking down.

The closest support area is found near $0.304. If a breakdown occurs, this is a likely reversal area. According to our analysis, it is not likely that the price reaches this area soon.

Based on this analysis, the price of XRP is likely to initiate a short-term upward move that could take XRP to or above the horizontal line.

Do you think the price of XRP will eventually break out from the triangle? Let us know in the comments below.

Bitcoin Dominance Breaks 70% For the First Time Since 2017