The Ripple (XRP) price has broken out above a descending resistance line that had been in place for 483 days. This could be the beginning of a new, upward trend.

Well-known trader PostyXBT stated the XRP price has some work to do if it wants to join the list of altcoins that are moving upwards. He outlined a significant resistance level right above the current price movement, provided by the 200-day moving average (MA).

Got some work to do if it wants to get the alt party started pic.twitter.com/Xf0DnZ9as5

Since 2017, the XRP price has twice followed descending resistance lines. They were in place for 203 and 105 days respectively. What ensued after the breakout was upward movements of 1,521% and 504%, meaning that the duration of the resistance line had a positive relationship with the magnitude of the breakout.

The current descending resistance line has been in place for 483 days, meaning that the ensuing upward move could be absolutely massive. 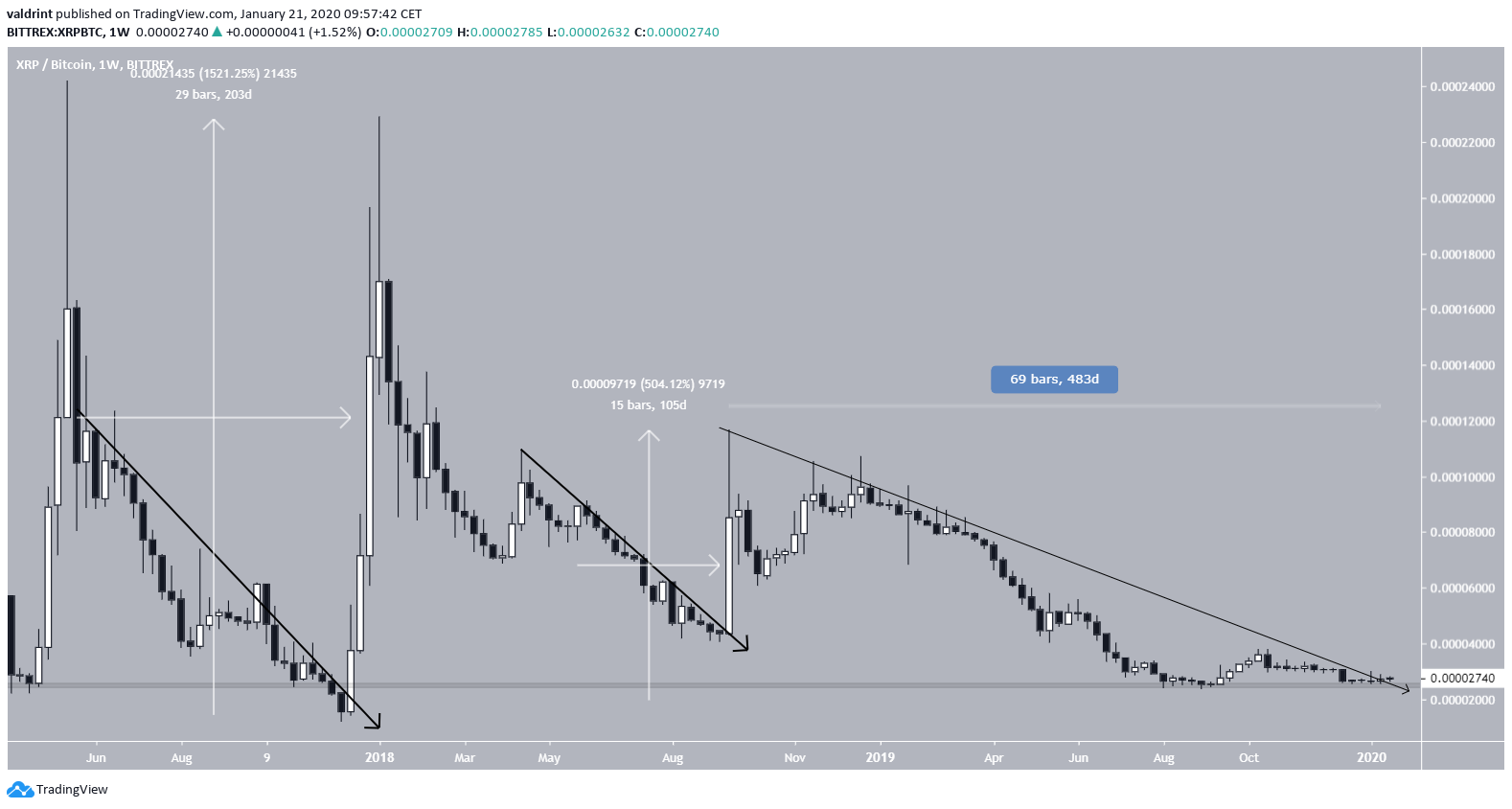 Looking closer at the movement, we can see a double-bottom pattern combined with a bullish divergence in the weekly RSI. This is a bullish reversal pattern that is occurring at a very significant support area, increasing the chance that it will successfully transpire.

A price close above the peak of 3,500 satoshis would confirm this movement. 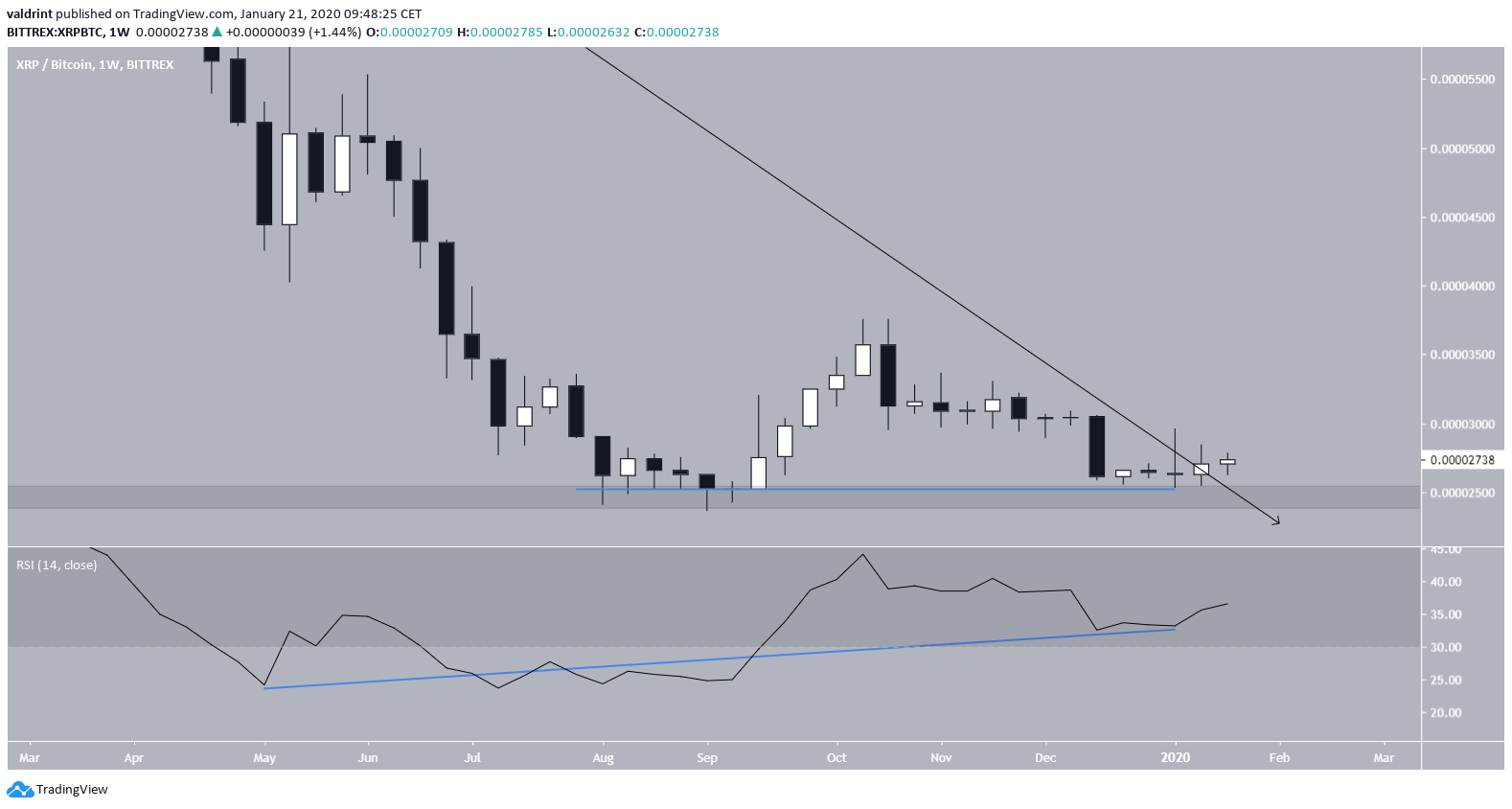 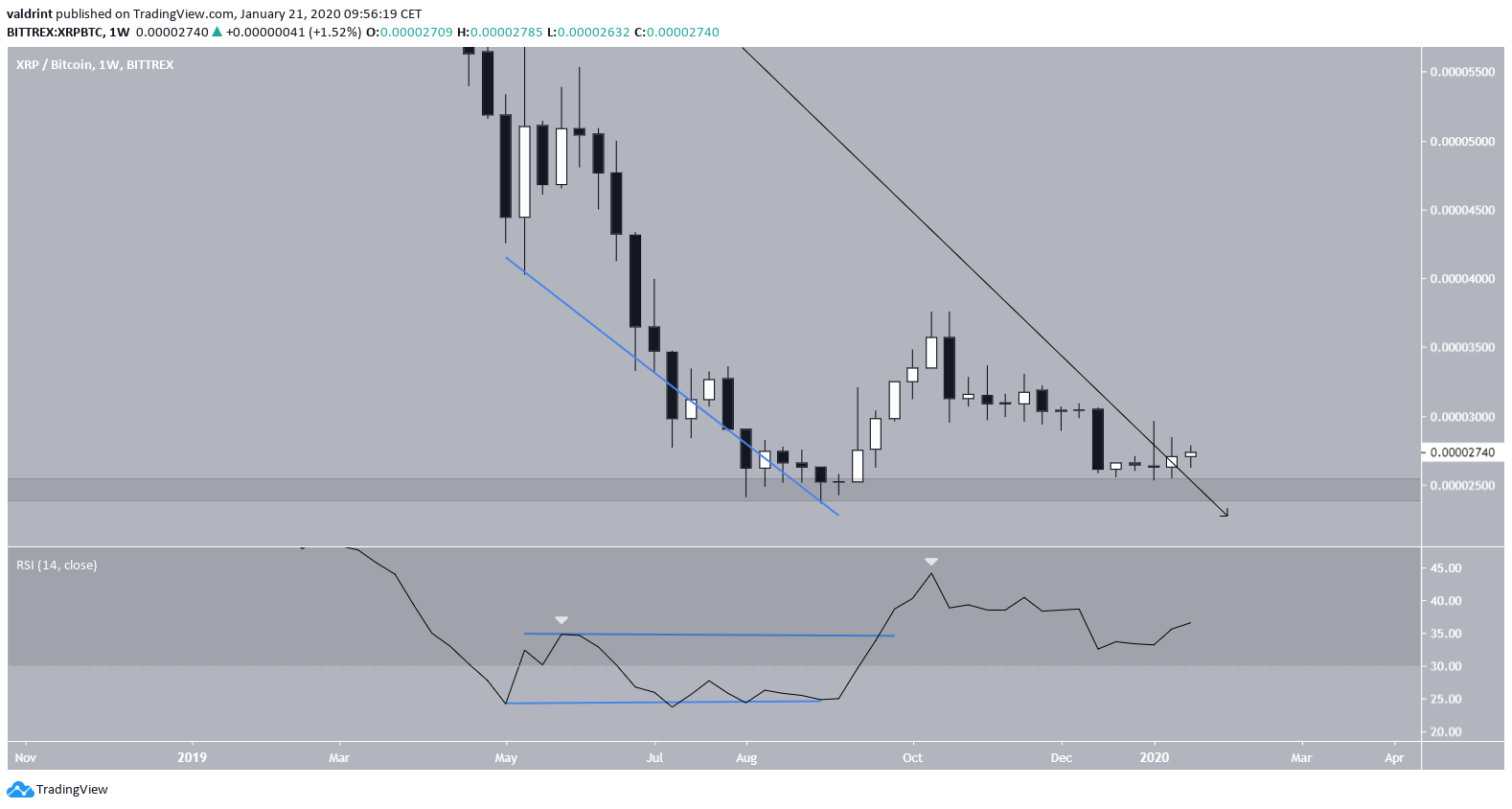 The daily time-frame reveals a descending channel in place since Oct 21, 2019. The price is currently right at the resistance line of this channel. There is serious overhead resistance, both from the previous breakdown level at 2,950 satoshis and the 200-day moving average (MA).

However, the price has created another double-bottom combined with a strong bullish divergence in the RSI, suggesting that the price might break out. 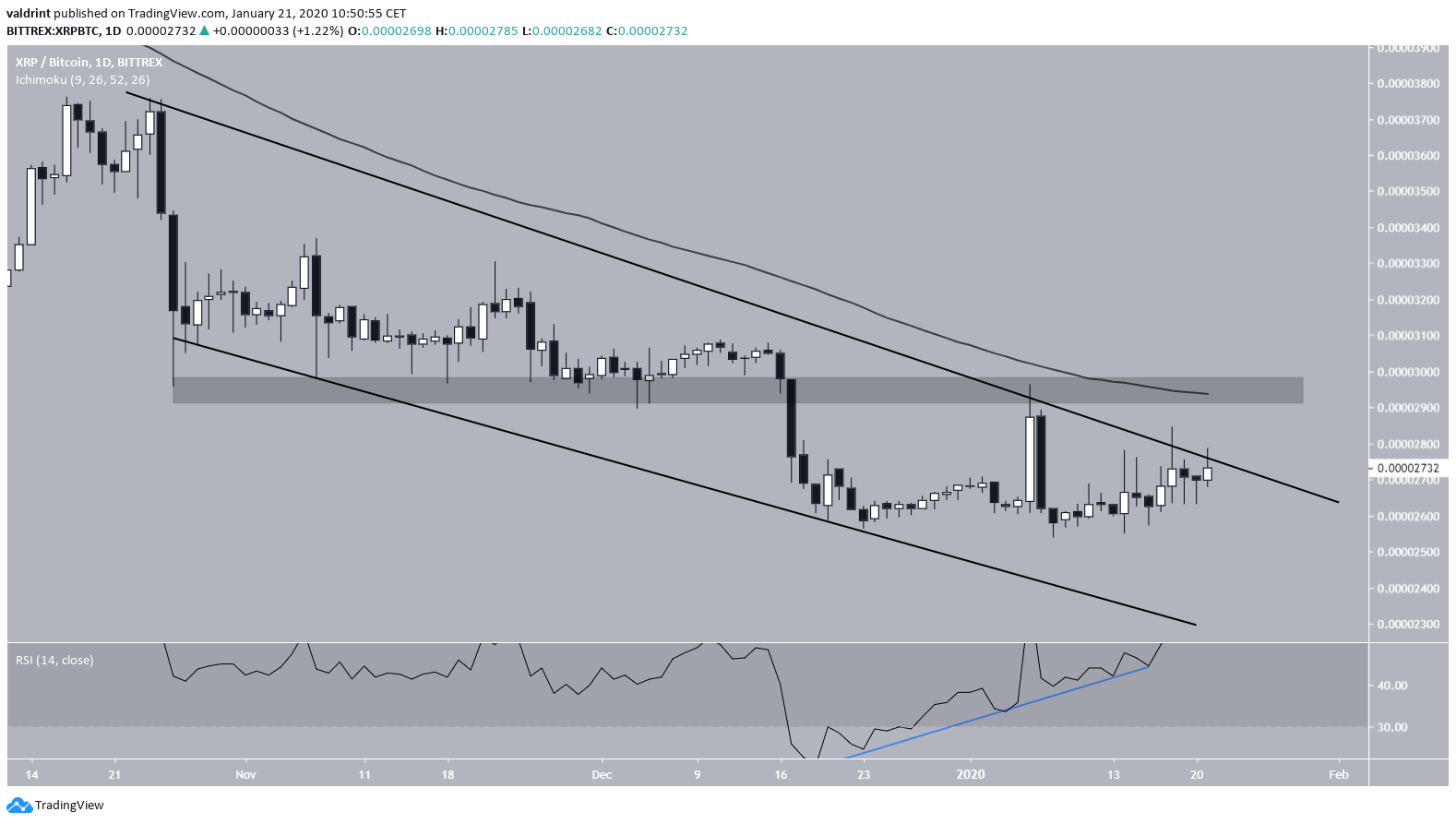 Shorter-term timeframes reveal an overthrow. The price decreased below the 2,600 satoshi support level on Jan 8 before reclaiming it shortly after. It did the same thing on Jan 13 and has been increasing since. The increase has taken the form of an ascending triangle, a breakout above which would also likely cause a breakout above the previous descending resistance line. 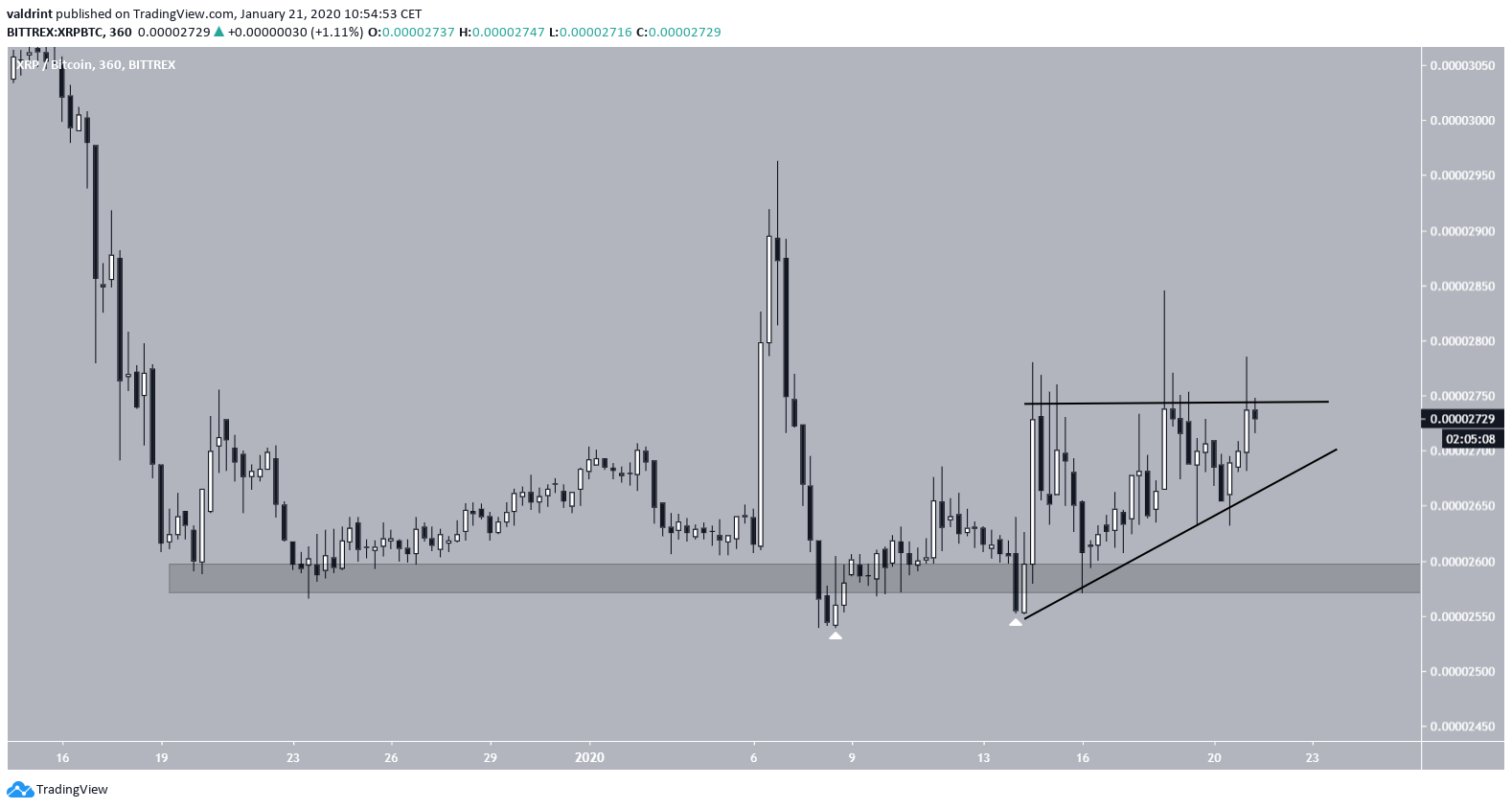 To conclude, the XRP price has broken out above a significant long-term resistance line. Technical indicators support the beginning of a bullish market cycle. In order to confirm this movement, the price has to break out above the 2,950 satoshi resistance level which is strengthened by the 200-day MA.