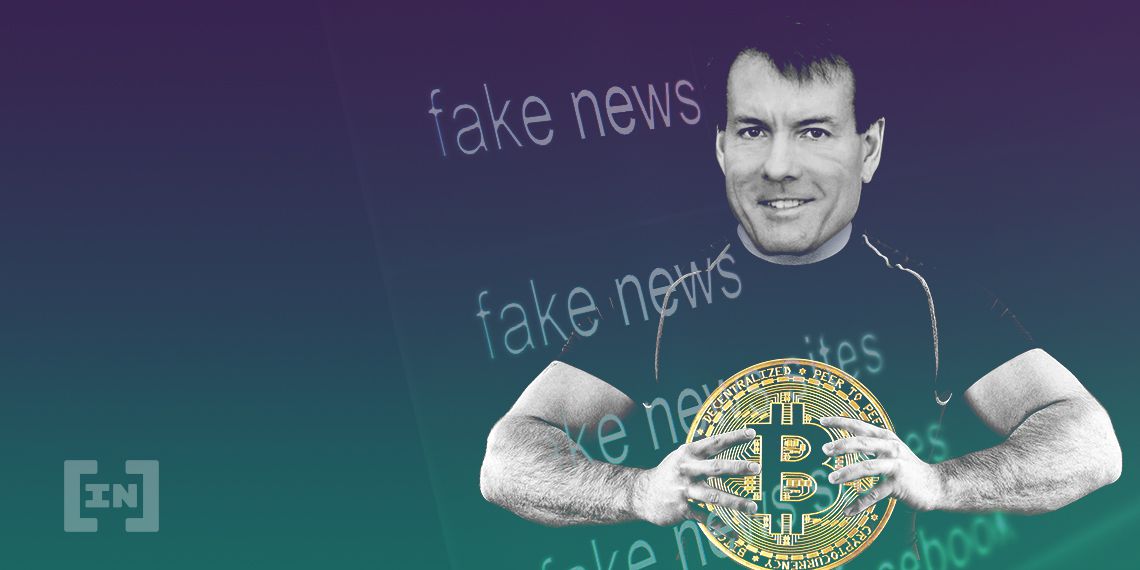 A circular (pdf) published on November 24th by Citron Research titled “MicroStrategy (MSTR) The Best Way to Own Bitcoin in the Stock Market”. The document championed Microstrategy’s move into Bitcoin.

Citron Research clearly states in red type along the top of the circular: “To be clear, we are not recommending anyone to be long bitcoin. However, we’ve been asked our opinion on bitcoin by many of our readers, so here it is.”

However, the fund behind Citron Research, the Citron Fund, took a position in MSTR. Citron Fund defended the move as being the best way to own Bitcoin. The circular cited CNBC’s Fast Money, which got the CEO of MicroStrategy, Michael Saylor, on the phone to find out if MicroStrategy is a software company or a Bitcoin hedge fund.

Looking to join in on the bitcoin boom? A new report from @CitronResearch says @MicroStrategy could be your best bet. MicroStrategy CEO @michael_saylor shares why. $MSTR pic.twitter.com/Ow6FM40gBQ

Throughout the interview, Saylor maintained that Microstrategy is a software company first and foremost. He claimed repeatedly that the Bitcoin purchase was made to prevent the company from losing money to inflation. Saylors says that the rapid expansion of the monetary supply by the central banks raised the cost of capital has tripled from 5% to 15% over the past year.

In the interview, Saylor cites some of the well-known parlance of the cryptocurrency space: that Bitcoin is the best safe haven treasury asset in the world, even better than gold, etc.

Reporter Melissa Lee hits back, suggesting that holding onto cash versus putting it into a speculative asset are two very different things. Saylor stands firm on his company’s decision to park its cash reserves into Bitcoin. He concludes by saying that holding on to cash just doesn’t make financial sense – if it is losing 15% of its value year-on-year.

Saylor reiterated some of the long-held criticisms for Bitcoin such as the fear that it might be hacked, copied, or banned. However, he also fields these issues himself. He answers that none of these things have actually happened in the decade that Bitcoin has been around.

Saylor signs off, saying that Microstrategy loves the enterprise and intelligence business that they operate in. The move into Bitcoin was only to ensure that they didn’t decapitalize the company.

Saylor is a believer in Bitcoin and he thinks that his company is leading the way in this regard. Moreover, once other companies understand the Bitcoin story, they will do the same.

As crypto news followers in the space know, shortly after Microstrategy’s move into Bitcoin, Square bought $50 million dollars worth of Bitcoin. Soon after that, PayPal launched crypto buying and selling on its app (to US citizens only) and began buying Bitcoin, which some said was even responsible for the recent price rally.

Microstrategy’s stock price has seen very bullish action since their move into Bitcoin. MSTR was trading at around US$ 160 at the beginning of November and is now at more than US$ 270.

Michael is a Content Marketer, Writer &amp; Educator with a multidisciplinary education in the Humanities and Social Sciences. Over his career, he has given much thought to the social inequalities found the world over and sees a promising equalizing opportunity in new forms of money, especially with crypto. Besides that he is busy raising his baby daughter, mastering the German language (it's a doozy) and growing things in his backyard. The picture is from when he still had hair.