The price of Lunyr (LUN) on Binance is analyzed in 30-minute intervals from Mar 5 to Mar 8.

The price made a low of $1.973 on Mar 5. A gradual rise ensued. Over the next few days, Several market cycles were completed with each dip representing a higher low than the last.

Tracing these lows gives us the ascending support line. It illustrates that Lunyr’s price has followed an upward trend over the last few days. 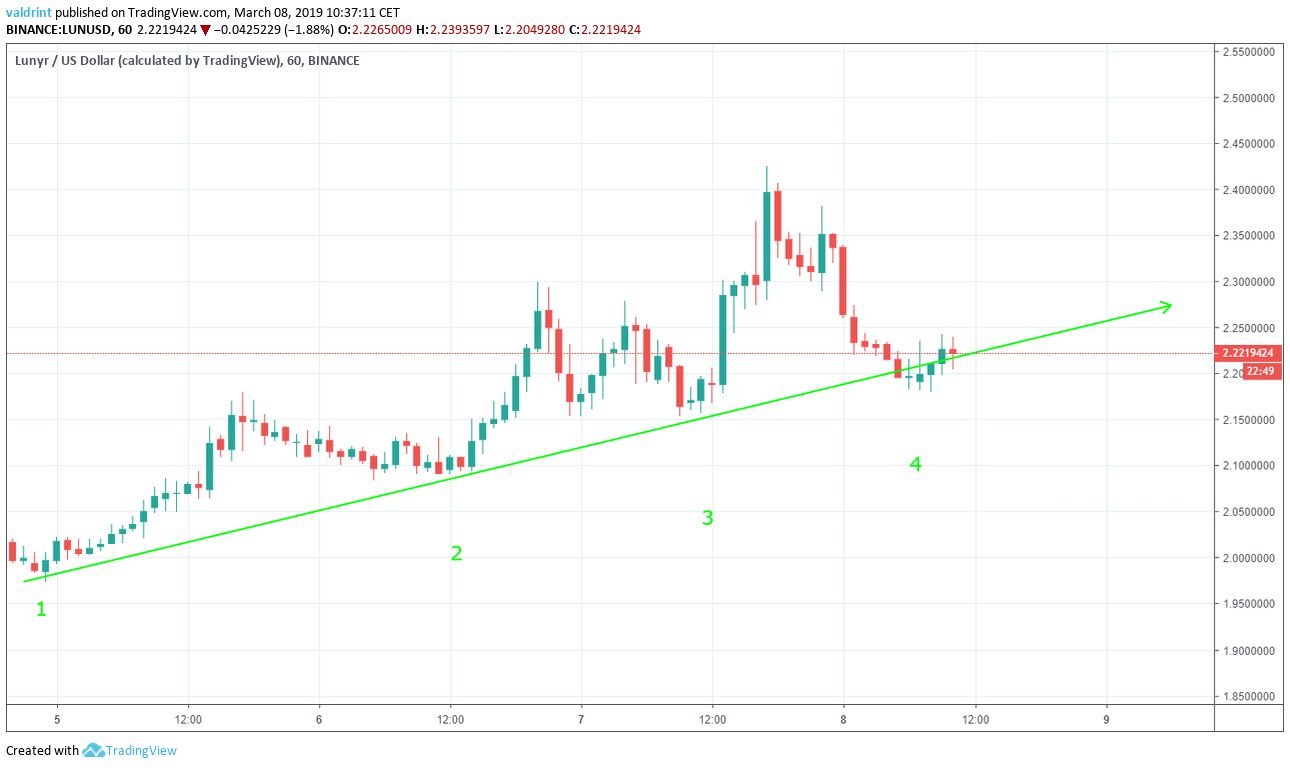 The dates on which the line was touched are:

The support line can act as a floor for the price, preventing further downward movement. However, a breakdown below these lines could initiate a rapid price decrease.

The breakdown below the support line by a wick in a volatile market is relatively unimportant as long as it is not succeeded by continued breakdowns. Small dips below the line occurred on Mar 8 but are so far insignificant. 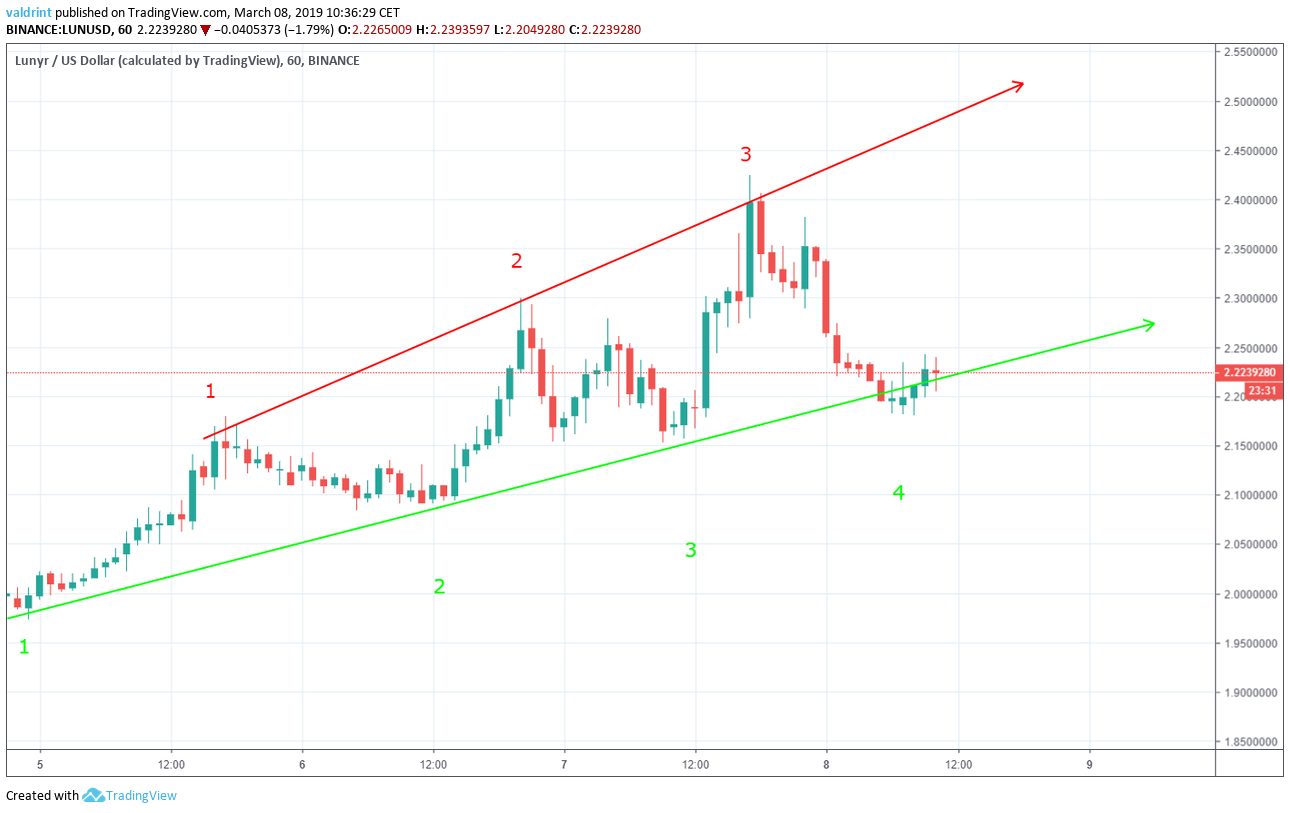 The dates on which the line was touched are:

The resistance and support lines combine to create an ascending channel, which is a neutral pattern, a price decrease and increases being equally likely. This would be the case for Lunyr had recent price drops not brought LUN below the support line.

As LUN continues trading near support, a breakdown appears possible. Careful attention should be paid to LUN’s movement over the next several hours and days.

Looking For A Reversal

Moving averages are an important analytical tool used to identify current price trends and the potential for a change in an established trend. 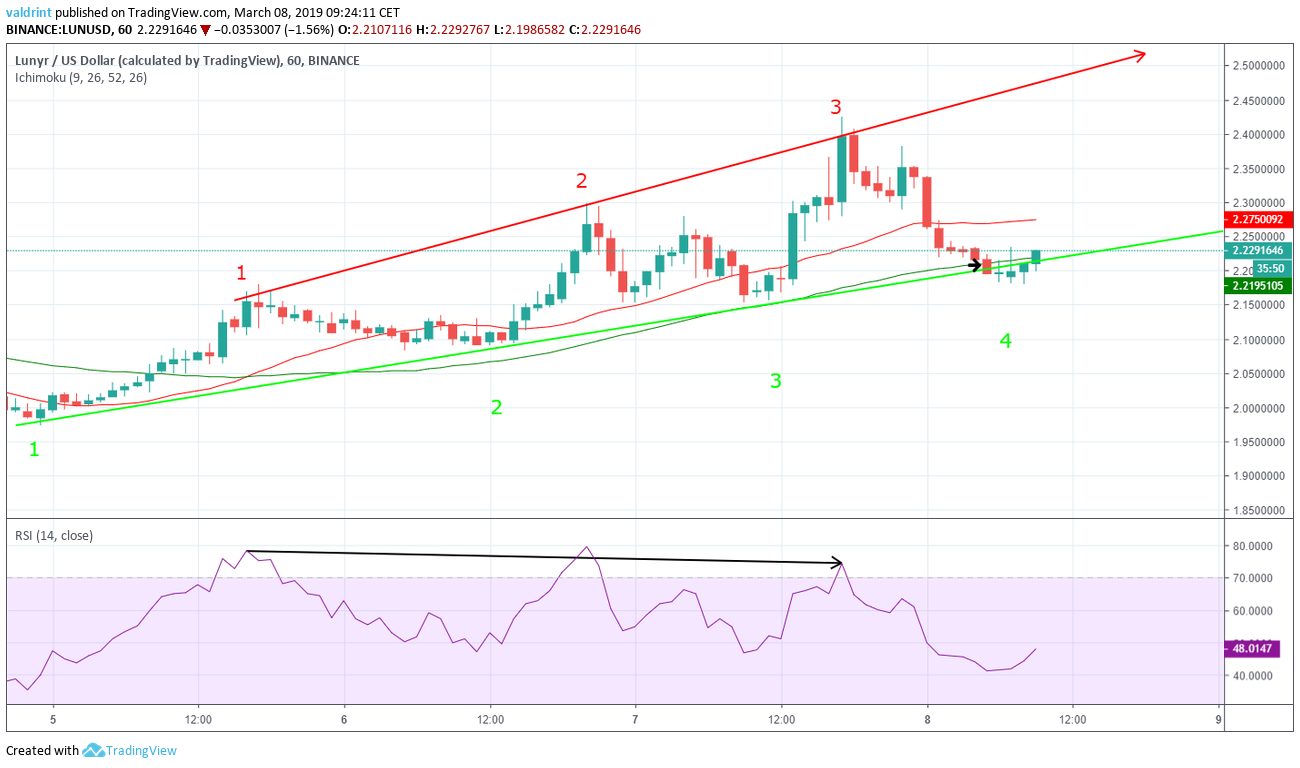 Similarly, the RSI reached a high of 79 on Mar 5. However, it continued to make lower highs.

This is called bearish divergence and often precedes drops in price. Furthermore, the price moved below the 21 (green) and 50(red) period moving averages on Mar 8—a sign indicating that the current upward trend is over

Coupled with LUN’s drop below support, price decreases for appear likely in the near future.

To determine this possible future prices, LUN was analyzed in four-hour intervals from Feb 7 to Mar 8. 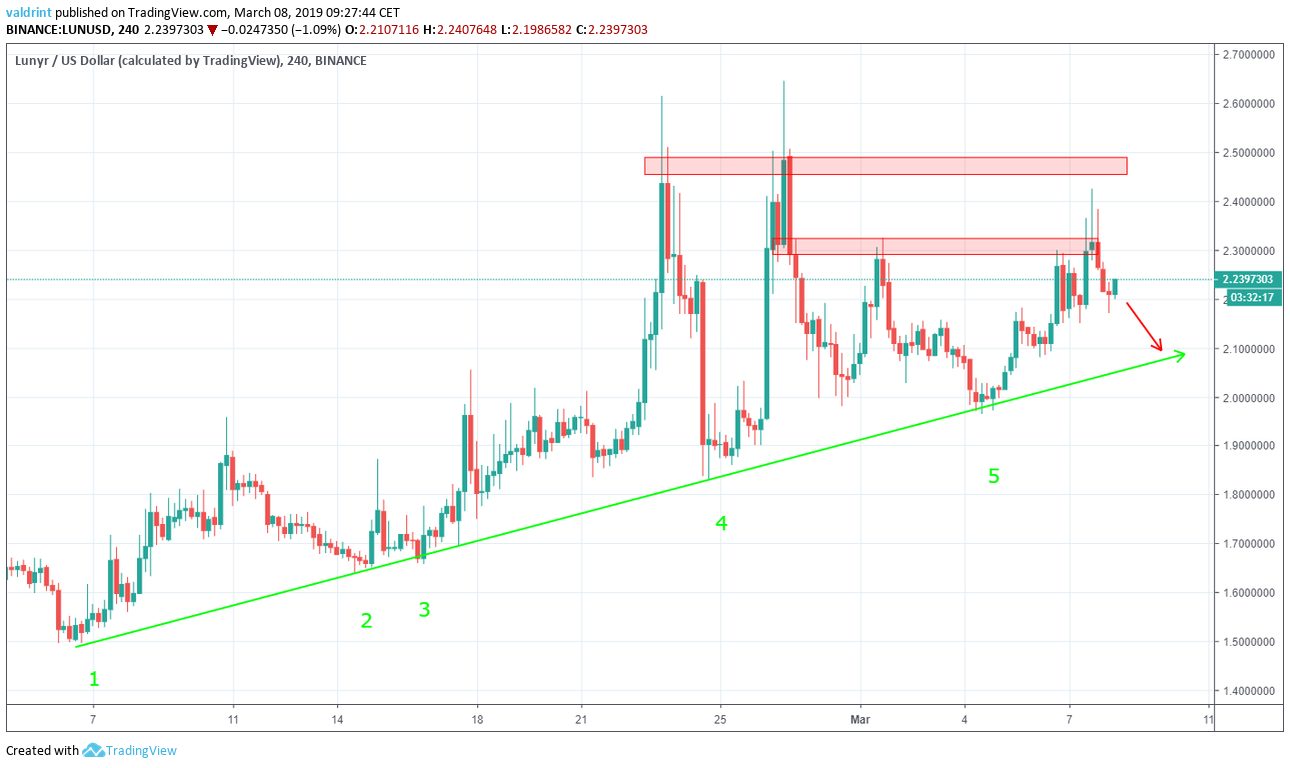 The price reached a low of $1.484 on Feb 7. It has made successive higher lows since. Tracing these lows gives us the ascending support line.

The dates in which the support line was touched are:

Based on this analysis the price of LUN is more likely to break down from the ascending channel and head to the long-term support line of $2.08. If prices break below this level, heavier losses may incur. If a continued does break down below the support continues, this prediction will be partially validated. If prices drop to $2.08 or under, it will be fully validated.

What do you think the future has in store for LUN? Let us know in the comments below.

Algorand (ALGO) is a relatively new cryptocurrency, having been launched on June 19, 2019....

Will Bitcoin Fall Below $8500? A Comparison Of Different Analyses

On September 4, 2019, @CryptoMichNL offered an analysis in which Bitcoin will not decrease...

Is ARK Just a Community Project or Something Bigger? (Price Analysis For ARK: March 8)