IOTA Makes Attempt at Moving Above $0.20

The IOTA price has reached a significant resistance area and seems likely to decrease.

Even though the IOTA price began the year 2019 with a significant increase, the trend reversed and IOTA closed the year with an almost 60% decrease. While the price began 2020 in a similar fashion, the current price movement indicates that a retracement awaits.

Full-time trader @CryptoMichNL tweeted out a chart of the IOTA price stating that the IOTA/USD pair is in the process of retesting a significant resistance area. If it fails, it is likely to decrease towards the support area at $0.17. Similarly, the IOTA/BTC pair needs to hold above 2285 satoshis in order to move upwards.

This one is showing a similar picture in the $USD pair. Acting against resistance. Either flipping that would be a long or otherwise retest of green.$BTC pair; needs to hold 2250-2270 as support and then we can aim for 2670.

Let’s analyze both these charts and see where the price is heading to next.

Currently, it is trading inside the $0.20 resistance area, which has previously acted as support. The price has created two long upper wicks, hence the bearish retest outlined in the tweet. The next resistance area is found at $0.23. 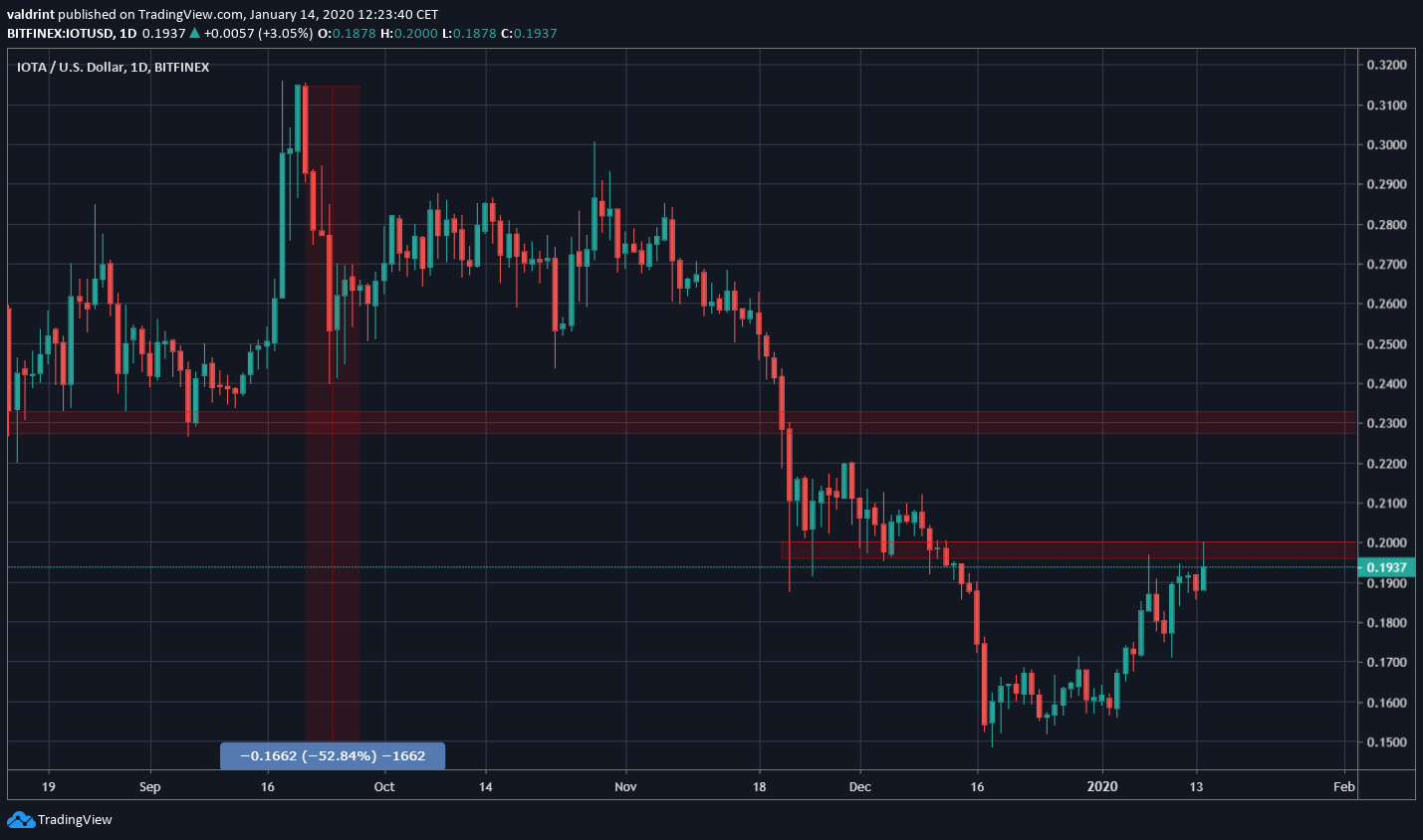 The price increase since the aforementioned bottom on December 18 has become parabolic. While this is unsustainable in the long-run, price increases at this rate can be extremely significant in a relatively short period of time.

In addition, there is a possible ascending resistance line in place. The most probable outcome here would be a breakdown below the parabolic support line, after a possible increase above $0.2, most likely in the form of a wick. 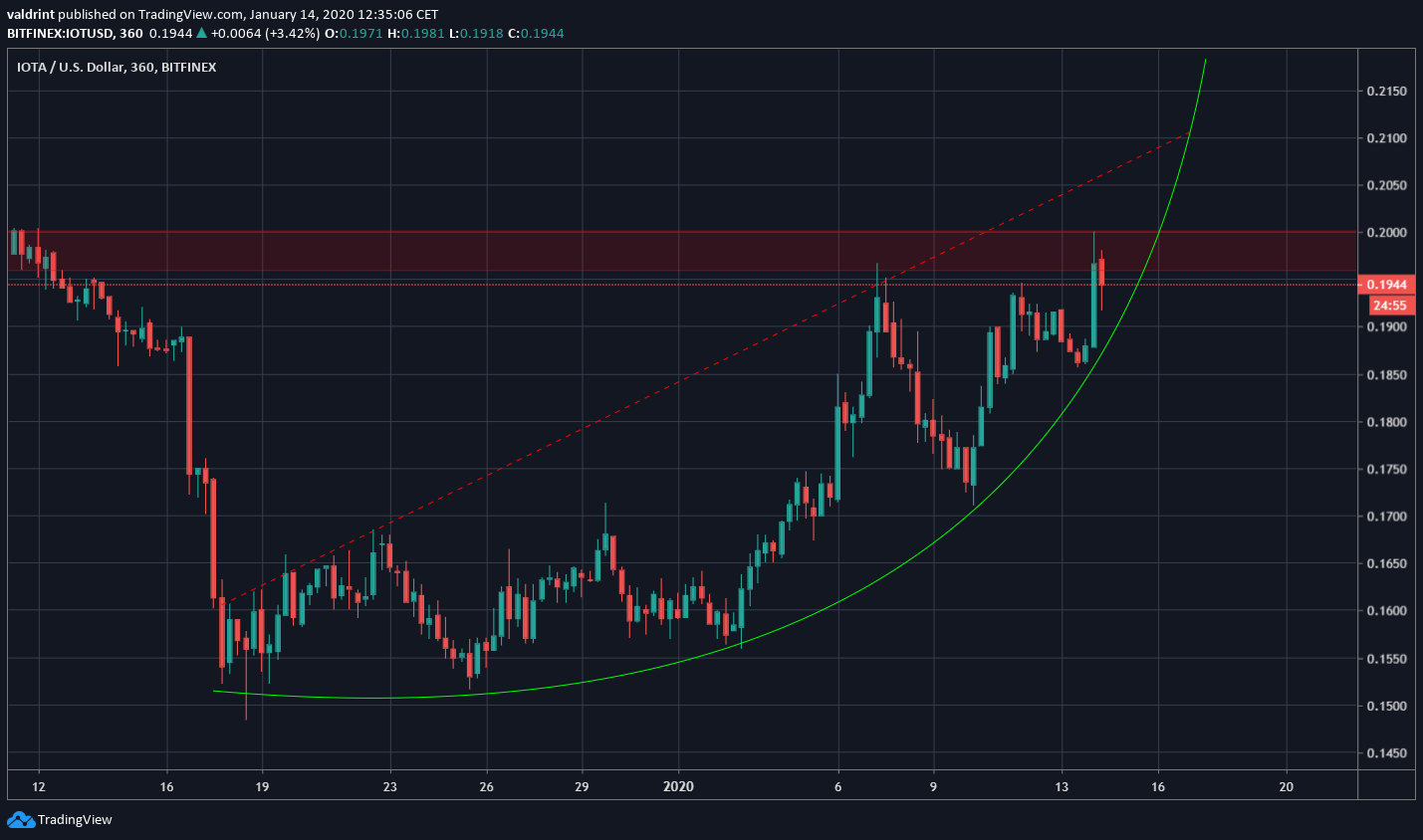 The price decrease is supported by the growing bearish divergence in the RSI. After the breakdown, the area that is most likely to provide support is found near $0.175, as outlined in the tweet. 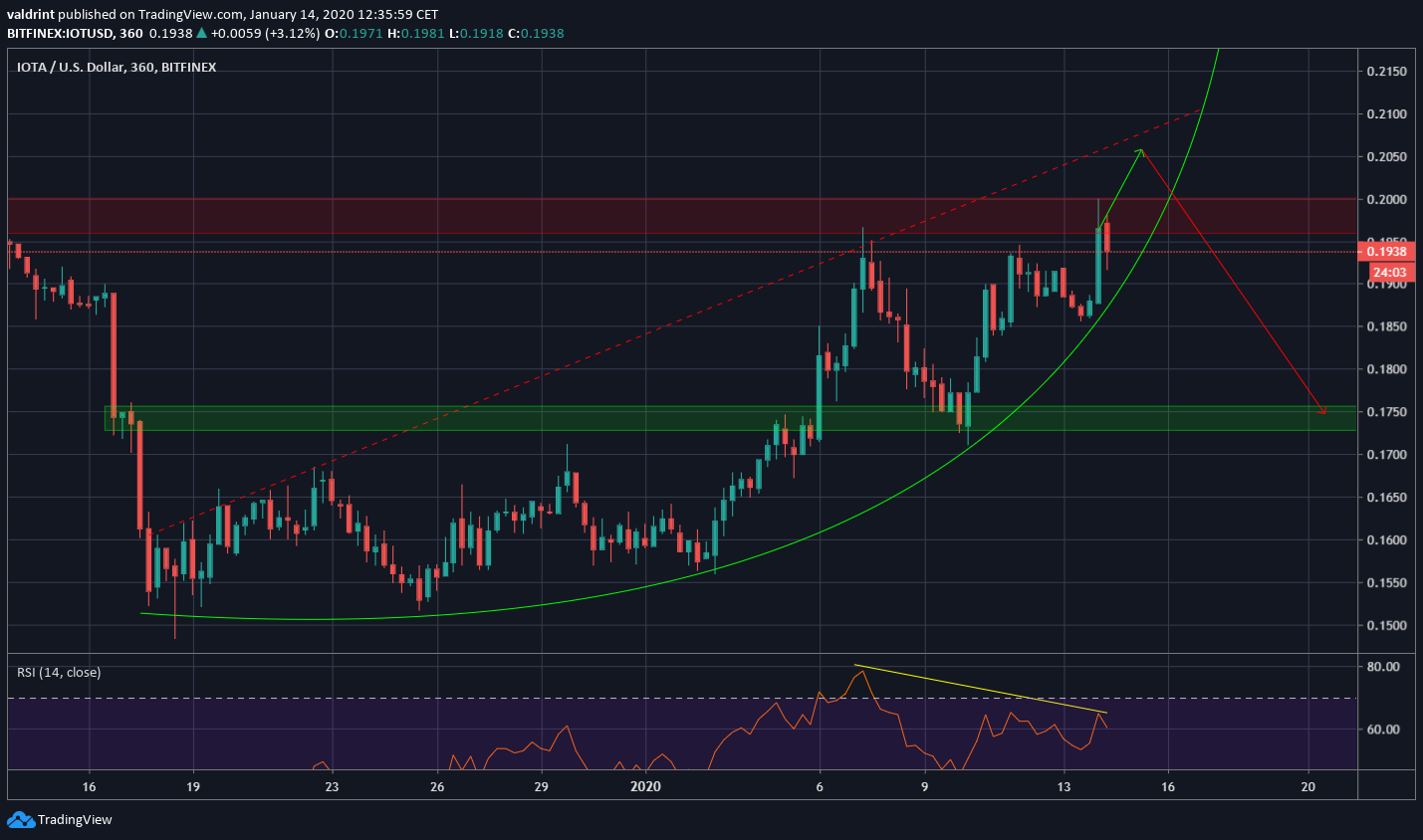 In the IOTA/BTC pair, the outlook is almost reversed. The price is trying to hold on to the 2285 satoshi support area, which also coincides with the ascending support line that has been in place since December 23. 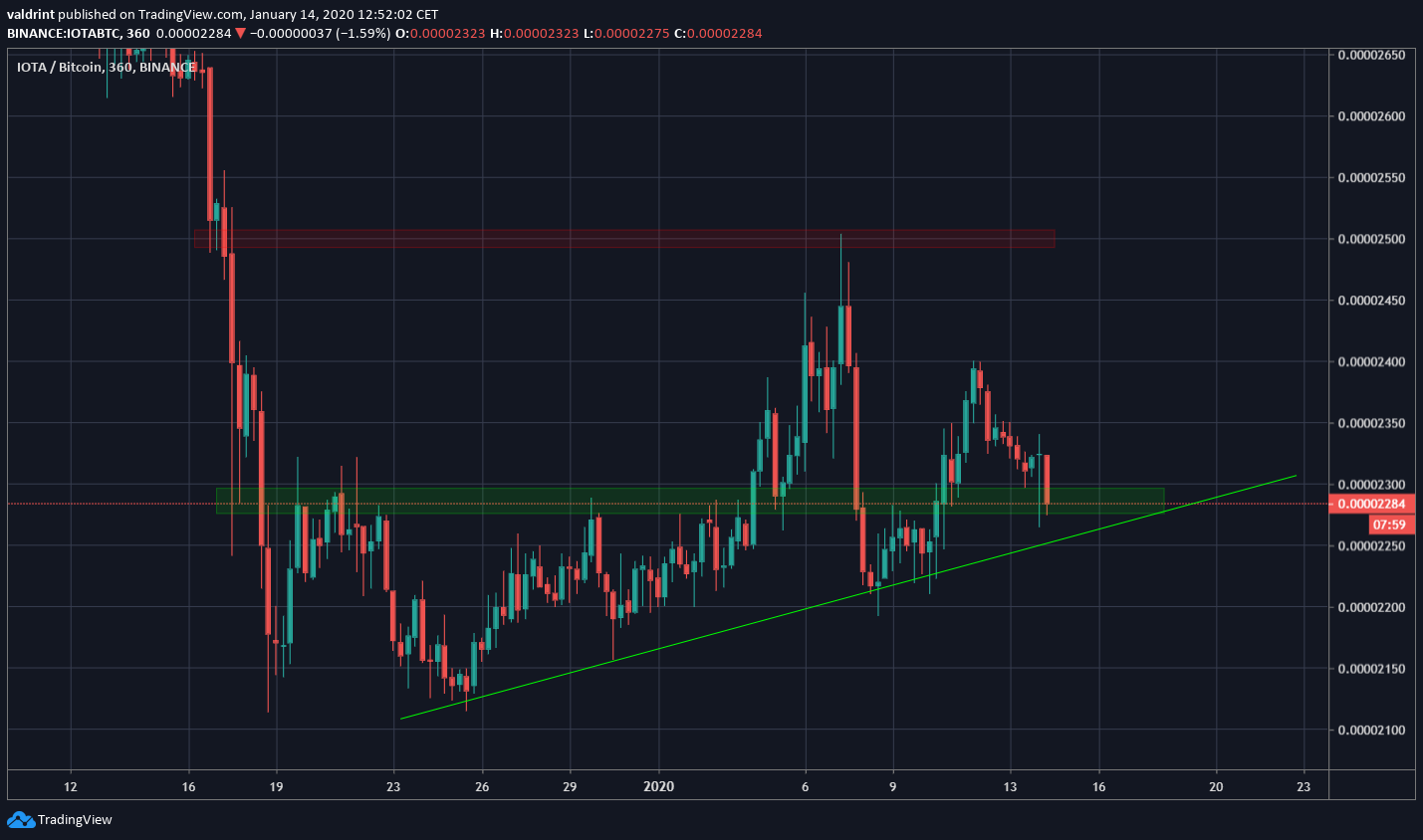 The long-term outlook does not bode well for the possibility of price increases. The price has been following a descending resistance line since October 24. The most recent time it touched it, it created a long upper wick and moved downward.

The resistance is solidified by the long-term moving averages (MA). The 100- and 200-week ones have made a bearish cross, while the 50-week one is providing close resistance to the price. 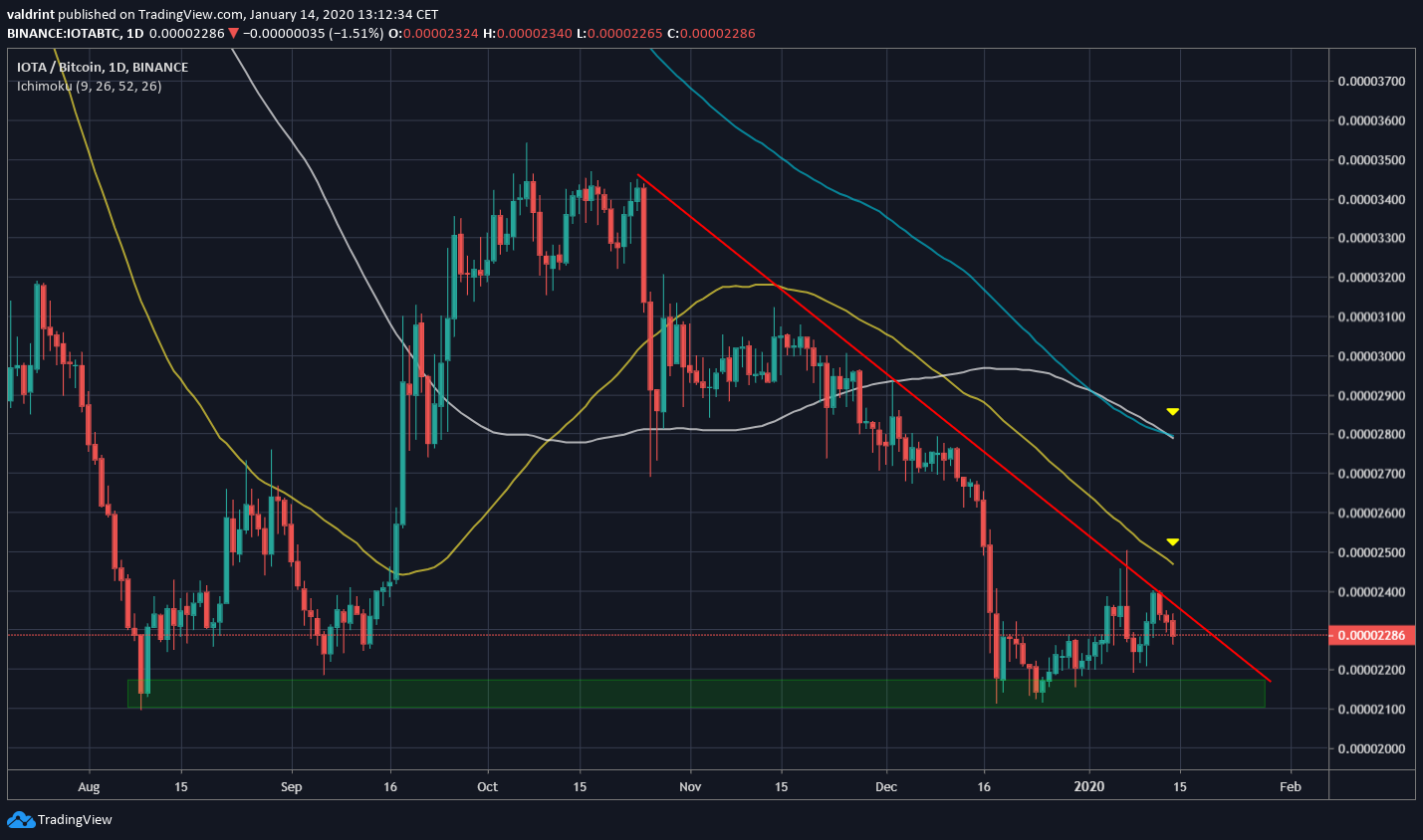 To conclude, the IOTA/USD pair has reached a strong resistance area and seems likely to decrease. This would also cause the IOTA/BTC pair to break down below the current ascending support line and revisit the 2100 satoshi lows.

Bitcoin Outperformed by Mysterious Precious Metal With 220% Gains in 2019