On June 18, 2019, Facebook Inc. unveiled its plan to launch its own cryptocurrency project, called Libra.

Since both Libra and XRP

BUY NOW have aims of sending money across the globe with minimal fees, Libra can be considered a direct competitor. In this article, we are going to analyze the XRP price and its newfound partner, MoneyGram, and observe if Libra’s launch will have an effect on them.

The price of XRP is analyzed at daily intervals from May 5 to June 18, 2019. The RSI and the MACD are added to the second graph.

The XRP price has been trading inside a symmetrical triangle since reaching highs of $0.478 on May 16. 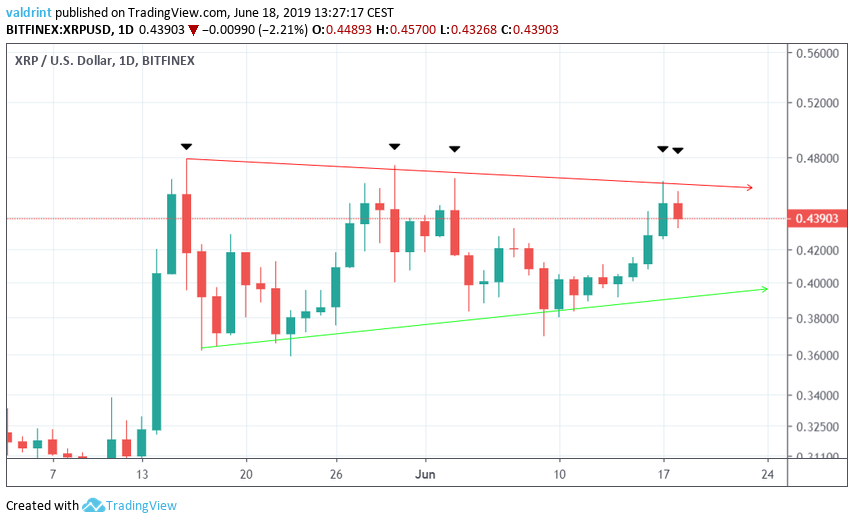 The XRP price immediately decreased and made a low of $0.362 the next day, before beginning a gradual increase.

Candlesticks above $0.44 have been characterized with long upper wicks, indicating that there is buying pressure around that level. This has been especially evident during the second time the price touched the resistance line, on May 27-29. The price created an evening star pattern, comprised of a bullish candle, a bearish candle with a small body, and a bearish engulfing candle that confirmed the reversal.

At the time of writing, the XRP price was trading near $0.44 — close to the resistance line of the triangle. After two bullish candles in a row, the price has been decreasing on June 18. The unveiling of Libra could have been the cause of this decrease.

A similarly-bearish outlook is given by technical indicators. The RSI reached a high on May 15, when the price made an initial high of $0.464. Since then, the same price level has been reached several times. The RSI however, has successively generated lower values. This is known as bearish divergence and often precedes price decreases. 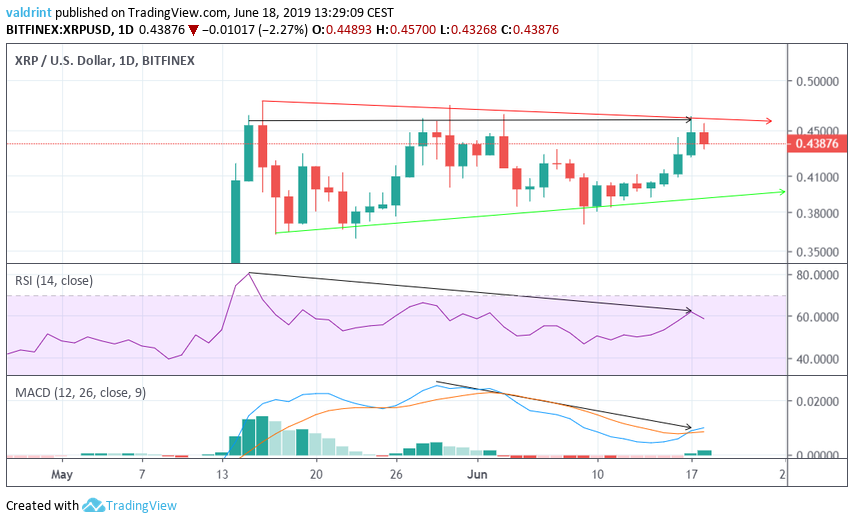 The MACD has acted in a similar manner, albeit the divergence began at a later date, around the end of May.

The use of these indicators supports an XRP price decrease towards the support line of the triangle. Furthermore, the news of the launching of Libra could have a similar effect.

The price of Moneygram is analyzed at weekly intervals from 2008 to 2019 in the first graph and at daily intervals from Nov 2018 to June 2019 in the second one.
During the past five years, MGI has suffered an enormous decrease. On June 2007, it had reached highs near $250. However, a rapid decrease ensued, which is continuing to this day. 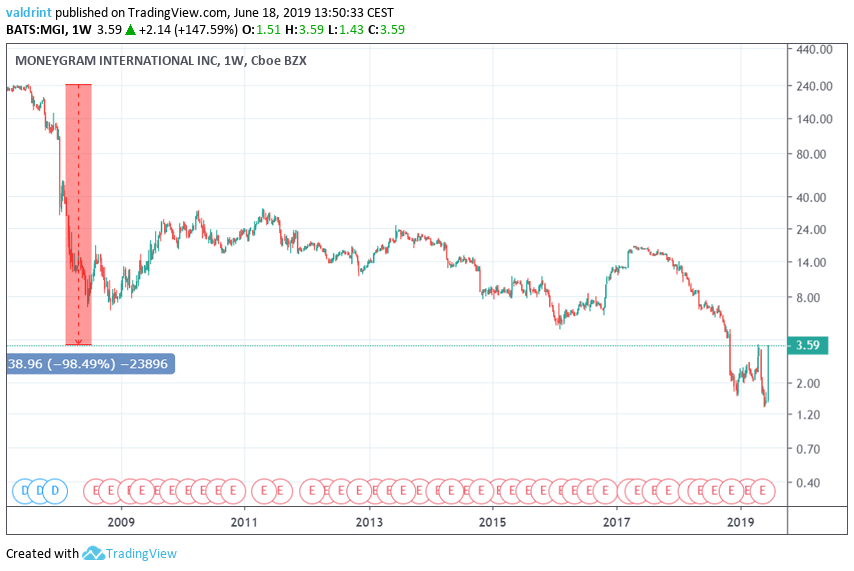 The price made lows near $8 the same year. Until 2016, it continued to fluctuate between $6 and $25. However, another downward move ensued on July 18, and the price made a low of $1.4. At the time of writing, it was trading close to $3.5.
In a daily time-frame, the price has been trading inside an ascending channel since Dec 2018. However, a rapid decrease initiated on May 2019 caused the price to break down from this channel. 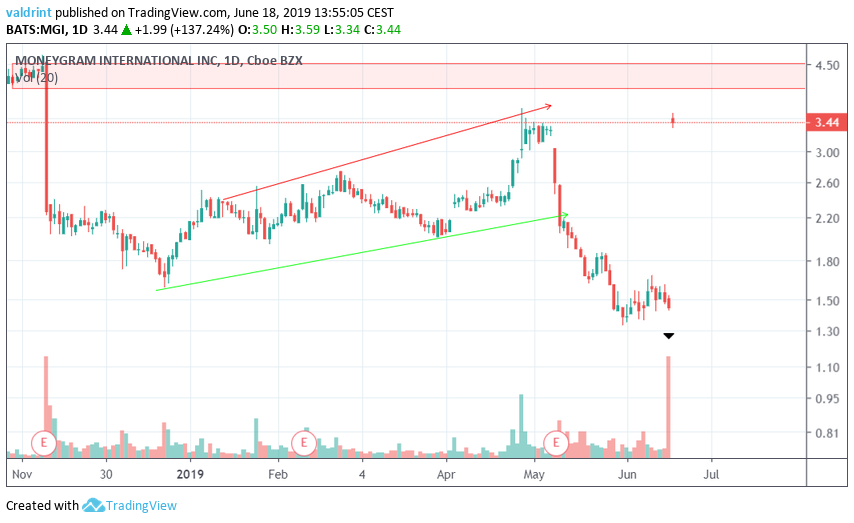 The decrease continued and the price made lows near $1.3 throughout June. On June 17, the price decrease with massive levels of volume which had not been observed since Nov 2018.
However, on June 18, the price opened at $3.5, a 140% increase from the previous day. Since the markets are closed on the weekend, that previous day is considered June 15. This occurred as a result of after-hour trading, possibly affected by the news that XRP has invested $50 million in MoneyGram.

The price of XRP enjoyed significant increases at the beginning of May. Since then, it has been consolidating inside a symmetrical triangle. However, according to technical indicators, the price has begun to show weakness. Combined with the negative news, this could be the beginning of a downtrend for XRP.

On the other hand, the price of MGI has been on a significant downtrend since 2009. Since both the technical and fundamental analysis are negative, we see no reason that the price would begin a reversal soon.

What do you think will happen to the price of XRP? What about MoneyGram? Let us know in the comments below.