Ethereum May Be Entering ‘Disbelief’ Phase of Current Market Cycle

The ‘Wall Street Cheat Sheet’ is a popular chart that shows the perceived emotions a trader feels while holding an asset — such as Ethereum (ETH) — throughout the peaks and troughs of a market cycle.

The chart consists of positive emotions throughout the run-up to the top and negative ones in the downtrend towards the bottom.

Applying the same cheat sheet to the Ethereum price, it looks as if the June 2019 high was part of the “Disbelief phase. This means that we have just begun a new market cycle. If this holds true, we are likely to see a significant price increase over the next two years.

Trader and market analyst Bitcoin Jack posted the cheat sheet with the price of Ethereum pictured over it. The price movement closely resembles that displayed in the sheet.

You do you, I do me 📈🙏 pic.twitter.com/XFDK9XwpPv

In case it is difficult to analyze the image from the tweet, the chart below offers a full-sized image of the price of Ethereum since 2017 with the emotional stages outlined in the price cycle. 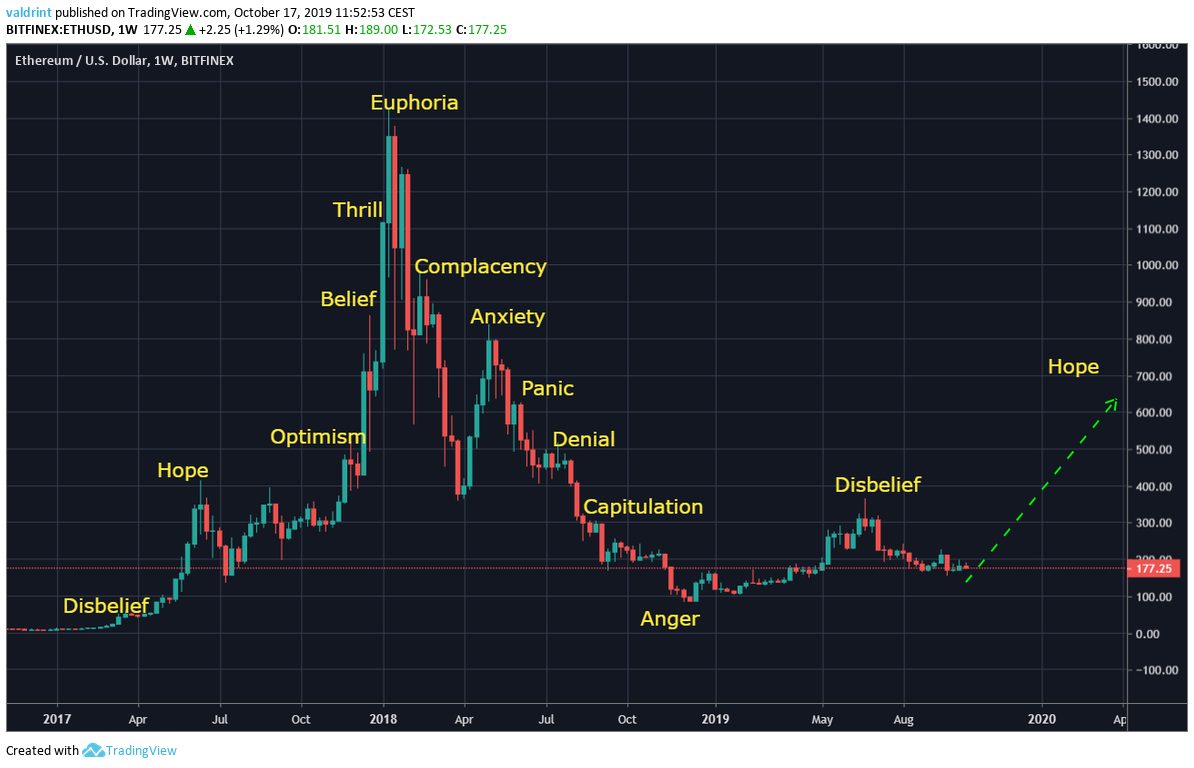 Judging from the chart, we are currently retracing from the “Disbelief” phase. If this upward movement continues, the succeeding price high should be that of “Hope.”

Since the chart is repetitive, this movement should coincide with that in June 2017.

Using the RSI, which is a momentum indicator, we can come to a similar conclusion about the position of the current Ethereum price relative to the market cycle.

The RSI has been oversold (<30) only twice throughout its history.

Therefore, it took roughly three years for a cycle to be completed. 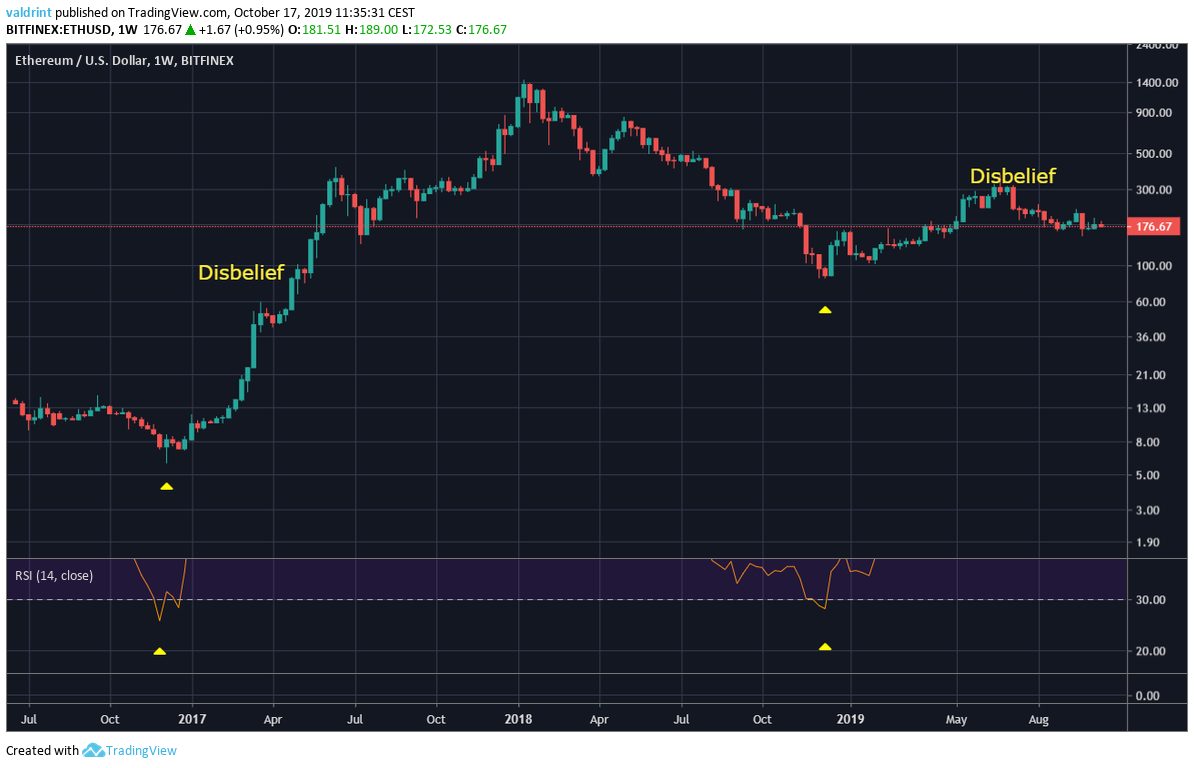 The similar RSI values are a further indication that the Ethereum price might currently be retracing from the “Disbelief” phase.

For the upcoming high, we can make a very rough prediction based on the magnitude of an increase in the previous cycle. 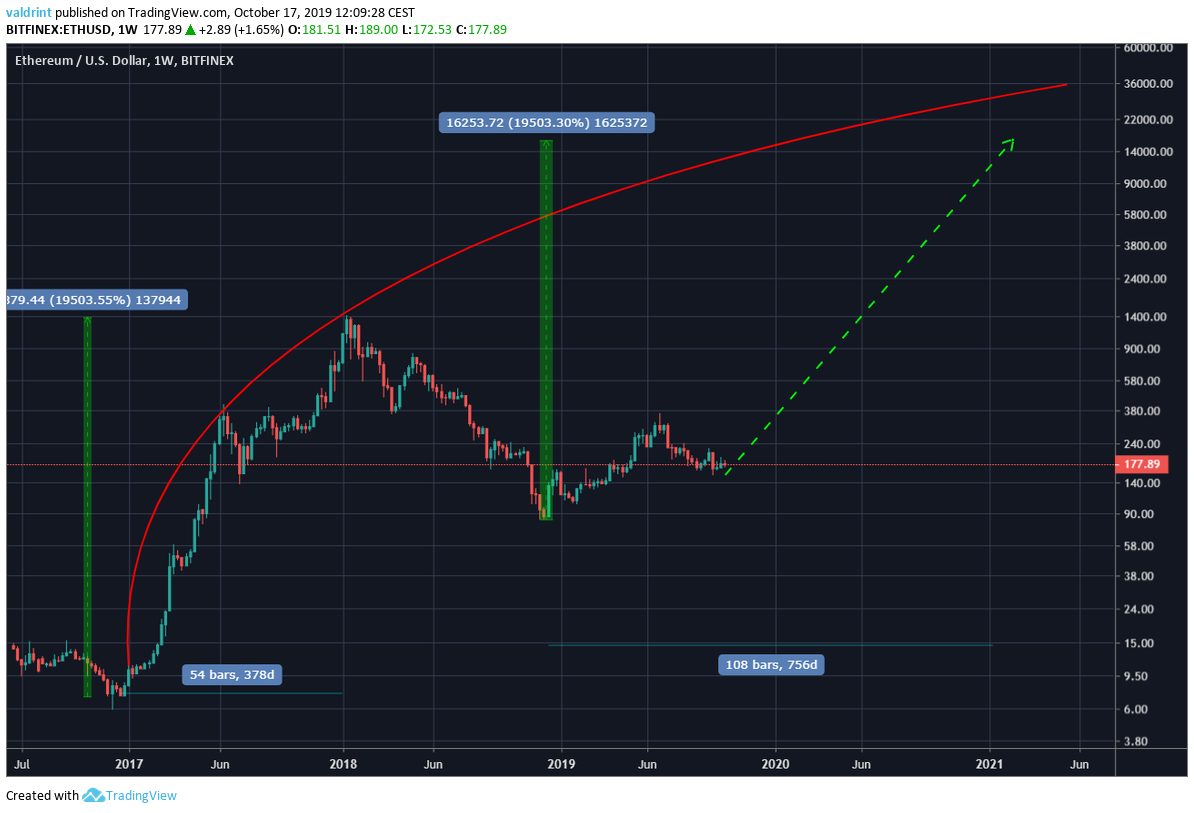 We have used a curved resistance line in order to limit the scope of possible price movement.

Since this value is currently above the resistance line, the high should be reached sometime after February 2020.

While the previous upward move took 378 days to materialize, it makes sense for this one to be slower since the rate of increase decelerates in logarithmic growth curves.

In what phase of the market cycle do you think Ethereum is currently in? Let us know in the comments below.

[Disclaimer: This article is not trading advice and should not be construed as such. Always consult a trained financial professional before investing in cryptocurrencies, as the market is particularly volatile.]