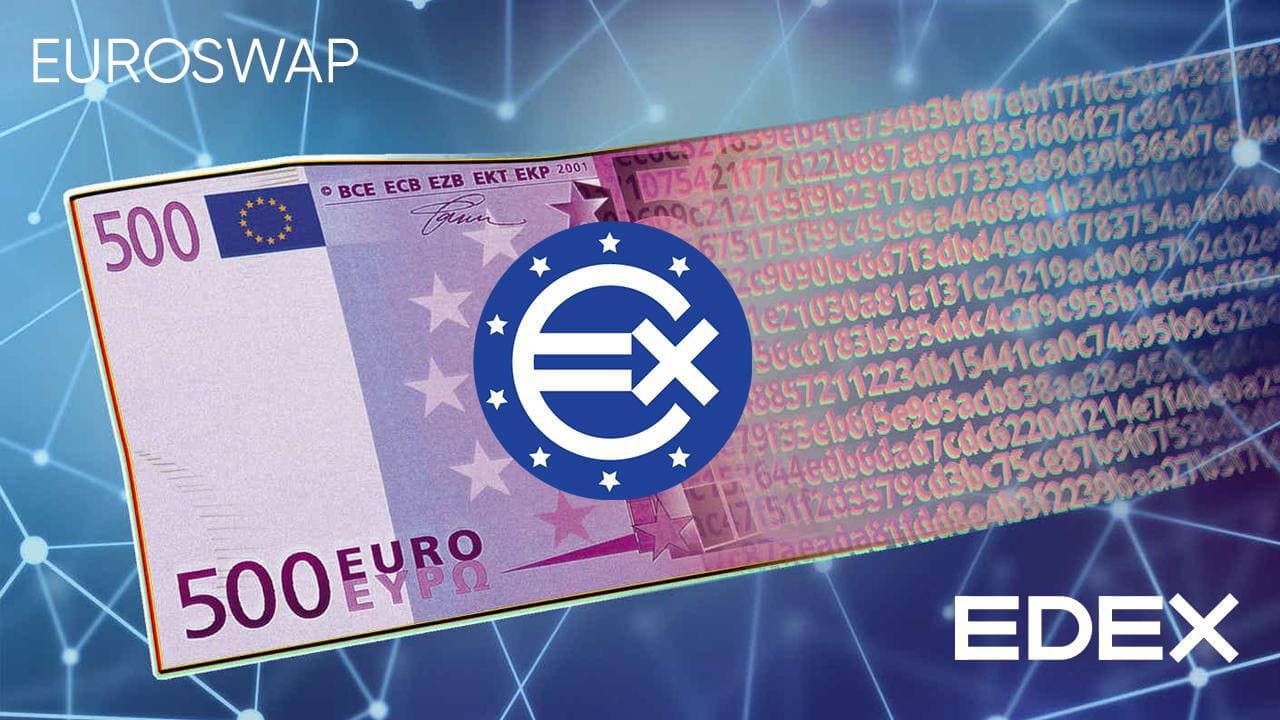 The largest crypto exchange BitMEX is buying one of Germany’s oldest banks. This means that the European Union must more intensively introduce blockchain technology into the continent’s traditional economy.

The ECB is already attempting to create a euro cryptocurrency. And in parallel, independent projects like EuroSwap EDEX are ready to involve Europeans in the Web3.0 economy.

In the last year, the European region has received over 1 trillion euros worth of cryptocurrency. That’s 25% of all global activity, with 50% coming from DeFi. The emergence of independent crypto projects capable of supporting European crypto integration, as well as competing for government financial products, is becoming a natural fit. One of the first projects to support Europe’s development vector was EuroSwap – European Decentralized Crypto Exchange (EDEX).

EuroSwap will allow buying and selling cryptocurrencies on the Decentralized Exchange for the eurozone’s official currency, the euro €, for the first time in world history. EDEX achieves these goals through cutting-edge blockchain technology, as well as through partnerships with major payment systems like VISA, which will open up gateways to fiat euro transactions. In other words, hundreds of millions of Eurozone residents will now be able to buy cryptocurrency securely with a simple bank card and just as easily withdraw their profits to the card.

The idea for EuroSwap EDEX emerged shortly before European Commission Chair Ursula von der Leyen announced Europe’s official course into the Web3.0 economy in the spring of 2021. It took EuroSwap developers just under six months to develop and test smart contracts and create the project MVP.

In November 2021 the EuroSwap developers opened access to the automatic Swap exchange for the first BUSD / EDEX pair – https://app.euroswap.io on January 15, 2022 the EDEX team again established its position as a serious player in the Web3.0 business by opening Early Staking to its investors.

Typically, most crypto projects come to the question of creating reward products at a late stage of development. It’s a time-consuming and expensive procedure that requires many hours of software development and even more time and effort to test the performance of the system. But EuroSwap EDEX has made this technology available to its investors now – at the early token distribution stage.

EuroSwap has opened Early Staking up to 152% APY for all EDEX investors. This is an incredibly brave step from the developers because they refused to block tokens and gave investors the opportunity to decide for themselves: to leave tokens in the wallet before trading and get a minimum profit or add them to Staking with yields up to 152% APY.

Just 5 days after the launch of Early Staking, over 55% of investors staked their EDEX tokens for a period of 12 months.

The team offers all holders to make their EDEX deposits into Staking pools and receive attractive savings regardless of deposit volume: 6 months – 71% APY, 9 months – 98% APY, 12 months – 152% APY. Staking is fully based on the architecture of BEP-20 smart contracts and provides guaranteed automatic accruals at the end of the chosen term.

To use Early Staking EuroSwap you need to have a minimum EDEX deposit of 200€. Then you need to go to the official website https://euroswap.io and find the tab Staking. Once the wallet is connected, the investor can choose the appropriate period and amount of EDEX tokens for Staking. After confirming the operation with a smart contract, you need to confirm the action by clicking “Deposit”.

Triple benefit for all parties involved

Early Staking for EDEX token holders begins as early as January 15, 2022. In other words, the additional earnings technology in the EuroSwap project will be available even before EDEX goes on the crypto exchanges. Thus, early investors will be able to profit now.

Another important point that completely turns the idea of conducting large ICOs – the developers of EuroSwap EDEX abandoned the banal blocking of tokens in favor of the profitable Staking up to 152% APY. Early investors, instead of meekly waiting for their assets to be made available, get an EDEX token immediately and can make the important decision themselves: make a deposit on the staking or trade the EDEX token immediately.

EuroSwap’s internal analysts estimate that more than 75% of early investors are willing to add as much as 90% of their deposit to Staking. This means that the EDEX token will be able to remain stable at the time of the launch of trading on the exchange and is very likely to immediately enter an uptrend, and the intensity of the growth will continue from one year.

You can find more detailed information about the EuroSwap EDEX project on the official website or the official Telegram group of EDEX.